I have revisited for analysis the below, well-known aerial image allegedly depicting Ground Zero.

I will set out to demonstrate how we can determine beyond reasonable doubt that this image, for all its apparent sharpness and quality, cannot represent an authentic/unaltered photograph of this Manhattan scenery. We will also see why the very nature of its manipulation is such that it cannot be ascribed to some 'innocent' cosmetic photo-enhancing embellishment.

I have applied a standard "brightness/contrast" filter to the entire image - with the result of darkening the shadowed areas of the cityscape. My yellow arrow gives a rough indication of the sunlight's source/angle. The first thing I noticed was the odd aspect of the smoke (or damp?). It is a transparent, see-through haze unlike anything I have observed in real life. It certainly LOOKS 'photoshopped'. However, we cannot - of course - draw any conclusions out of mere impressions - so let's get on. To the left of the image we have two buildings ( A and B ) : their western façades are both in full shadow. My brightness/contrast filter toggling has made them turn pitch black - and no windows/or details of these two shadowed façades are visible whatsoever. Now, as we look at buildings C an D, we can establish two incontestable facts:

FACT1: Façades C and D should be in (pitch black) shade - in the same manner as façades A and B . They are NOT:
they inexplicably appear as if they were brightly lit by the smoke/or damp drifting in front of them.
FACT2: We know with absolute certainty that, in the real world, smoke (or damp) does NOT cause any shaded area behind it to become visually brighter/more defined. Smoke or damp are no light-generating sources - as far as I know.

We can therefore conclude, beyond any shadow of doubt, that the above image can NOT be a truthful representation of reality. The only possible/plausible explanations to what is observed, are:
*1: The image has been digitally edited ('photoshopped') to insert the smoke/damp into the scenery.
*2: The image has been entirely crafted within the digital domain - it is a complete fabrication.

Either way, the question as to WHY this image purportedly depicting a momentous event of American history (and credited to a US NAVY photographer) has clearly been digitally altered/manipulated/fabricated - is momentous in itself. This should be of grave concern to anyone interested in the full truth of 9/11. I suggest efforts be made to contact US NAVY Chief Photographer's Mate Eric J. Tilford and ask this military man for an explanation.

I suggest, as shadows are wrong, the smoke is added later on top of the shadows, i.e. copy/pasted on the already fake picture of the rubble (it didn't look like that) to make the impression that, long after 911, fires were still burning (NYFD didn't do its job!), etc, etc, making it hard for all other heroes trying to clean up the mess. Thus the picture is multi-fake!
Top

Looking for "similar images" in Google I found this one, that I imagine to be equally famous...

This one is also credited to the US Navy, so I'm guessing it is offered as if taken on the same flight just before or after the other. The smoke is almost identical. As if it just floated in mid-air without any recognizable source for it. This is a characteristic of smoke in Hollywood movies, as so often it is used to give a eerie feeling to a scene. But in reality, from two opposite angles you should at least be able to see where the smoke comes from.

EDIT: Another one with the nonsensical "smoldering" effect in mid-air, more or less identical to the other pictures: 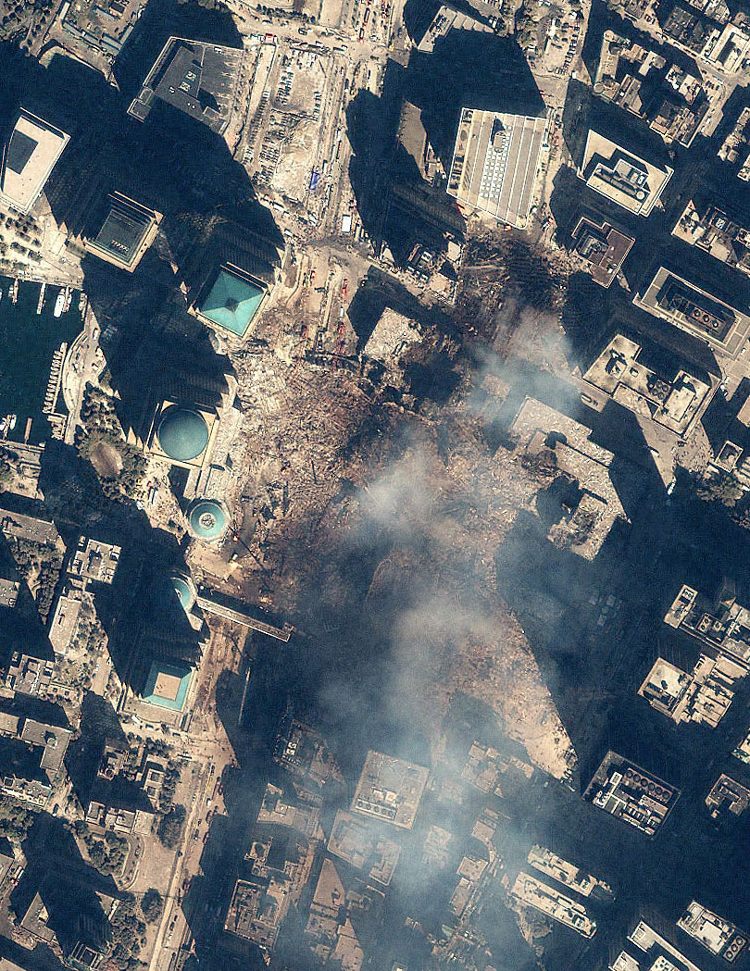 Same shadows, too. Is this a product of the same Navy flight? Nope: it is given as a "satellite photo" on this page. How is this possible? Was the satellite going by exactly when the Navy was also doing recon flights over the area?

No way was the area that clear and viewable. It's a joke. They are making it look like the towers had visible souls/angels and subconsciously driving home the fiction that the towers were "filled with life" and that anybody died in the towers.
Top

nonhocapito wrote: This is a characteristic of smoke in Hollywood movies, as so often it is used to give a eerie feeling to a scene. But in reality, from two opposite angles you should at least be able to see where the smoke comes from.

Perhaps I know where this curious type of smoke seems vaguely familiar from...


The Dinosaur Films of Ray Harryhausen wrote:(extract from Google Books, with reference to ''One Million Years B.C", where attempts were made to use uncooperative Tenerife volcanoes in a desire to simulate a Hollywooden vision of dinosaur-meets-dame) ...'the Roques are framed in the shot with a smoldering Tiede off at a great distance; this great plume was not active at the time so a plume of smoke was optically printed over the summit'

Doesn't the smoke have that two-dimensional applicated false feel to it? Like a gel layer, perhaps more sophisticated in it's source than Harryhausen's puppet animations, but the ersatz smoke in these shots has that same "scale fail" you are subconsciously aware of even as a child, watching a classic episode of Thunderbirds...it's not nearly as 'convincingly unconvincing' as that super-cell CGI white false smoke that gushes implausibly from the WTC in the matrix shots.

nohocapito wrote:But in reality, from two opposite angles you should at least be able to see where the smoke comes from

A mean wind vector, coupled with a back-bearing resection, should give a particle concentration (cf levels of obscuration) that's pointing back to it's...source. In a real-world setting, pretty much... [/edit]
Top

Having found a fourth image with the same characteristics (here: http://jacqueline-devereaux.blogspot.it ... chive.html), I thought I might make a little comparison montage:

If all these pictures belonged to a series taken by a satellite, would they have all these different angles?

And if they were taken by different satellites, would they represent the same time of the day?

And if they were taken on different days at the same time of the day, would the smoke have the same identical size and strangeness to it?

All around Ground Zero the skyscrapers are acting as sundial pointers, perhaps telling us the time (times?).

Was there not an excellent deconstruction of this sort of photochronography earlier on the forum, using full almanac data cross-matched to lat-long coordinates? It didn't fit well with reality, I seem to remember.

And what does this say??

Sequenced shots from a LEO tactical satellite track? Or a U2?? Or just economic use of image layers in multiple composites??
Top

Here is to clarify my analysis posted earlier in this thread.

This clarification has to do with building C (the US Post Office building).

As we can see, the western façade of building C is brightly lit - as if the smoke in front of it were a light source - which is, of course, absurd.
It should be just as dark (shaded) as the A and B façades. "Just as dark"? No. More precisely, C should actually be EVEN DARKER than A and B, since the C façade is angled even further away from the sunlight (as shown in my red frame): I therefore stand by even more firmly to my initial assertion: this "Ground Zero" image has been digitally manipulated (or digitally manufactured) - and cannot be a truthul representation of reality.

THE SUN DOES NOT LIE.
Top

*
I am simply reposting here the original image discussed above - for reference. Of course, the reason why I applied a modest amount of the brightness/contrast filter for my above analysis was to help visualize/highlight the shadow aberrations to the untrained eye: to be sure, the latter are very much visible on the original, unaltered US NAVY image - as published on Wikimedia: Source http://www.swulinski.com/Images/USA/NY/ ... 22-big.jpg
is a typical fake picture of what it looked like on Ground Zero after the top tower 'attacks' (

) and before the towers 'collapsed by gravity from top' due to some local failures up top (fires???

).
Note that the only person on the Ground Zero we see is the photographer behind the camera we do not see. So who took this idiotic photo?

Is it WTC 1 or WTC 2 in the background and what over-pass is it?
The photographer http://www.swulinski.com/9-11/NYCAttack1.html is Polish so I look foward to Bostonterrierowners' thoughts.
Top

...please provide a useful source where possible, see this post: http://cluesforum.info/viewtopic.php?p=2367594#p2367594
(I know I'll be remembered as "that guy who bothered everyone about sources"

As to the picture, I think that's supposed to be the bridge across Liberty street (now, as I understand, demolished and rebuilt). Here it is in an old picture: 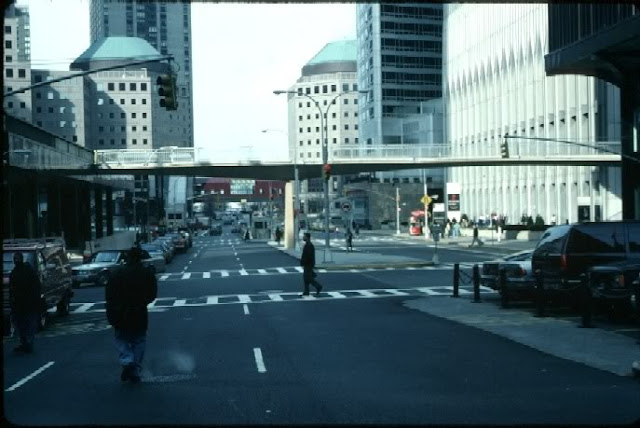 More info can be found in this excellent article by Stephen Warran: http://stevenwarran.blogspot.it/2010/12 ... -from.html

The paper everywhere is another of those absurd details ever so present in the 9/11 forgeries (see Fairbanks' extended video, a real tribute to paper:)

This seems as good a spot as any for this question, I think the Fairbanks video answers it, but maybe some of you can recall other videos with similar vantage points. I know some researchers have gotten familiar with the lay of the WTC through Google Earth, etc. Are there any other videos with a vantage point that includes the BASE of the WTC? I always wonder why none of them ever includes a tilt downward to capture plane parts that sheared off on entry. (I mean, we know the real reason). I bought the whole story at the time so from their perspective that would be "Mission Accomplished" (heh, heh, heh...), but doesn't it make sense that some thinking person might have thought: That ENTIRE plane just disappeared into that concrete and steel building, not possible.

It seems a bit arrogant to assume that no one would voice skepticism about this idea. Fairbanks (or whoever that dude is) gets all distracted after the impact and flounders around to another block, but pulls himself together enough to get marvelously detailed shots, complete with zooms with pristine focus of the paper on the street, but never thinks to catch a couple of frames of the tail section? I know the melting plane tells the whole story, but in retrospect, it's ridiculous on its face. How could they expect us to believe a building would swallow a plane? My hat's off to everyone who caught this from the get, (I was a dupe), but if they were going to plant plane part one, it should have been on the entry side, not the exit.
Top

nonhocapito wrote: By the way, here is a larger crop of those buffoons in pose:

What a photoshop disaster... other than looking cut-out and pasted: The neck of the guy to the left; the "smoke" he seems to have in front of his face, while he is obviously not smoking; the lines on half of the face of the guy to the right... etc.

That looks like a reflection of glass, to me, like they were looking through, (or their original photographer was looking through) a window. They definitely were not a part of the 9/11 scene.
Top

Actually, he is holding a cigarette between his fingers. This was corrected later on in the thread.