brianv, please refrain from this type of humor.

This would be the second photoshopped photo that was created by a poster here - just to make fun of the official perps' photoshopping.

Although it is extremely tempting to go on a crazy spree of making obviously ridiculous pictures, we must keep the pressure on the perps for their fakery crimes and not join in on them.

That is, of course, unless you actually found this picture of Mr. Fetchett somewhere? :rolleyes:

(Which at this point is sadly plausible based on the atrocious obvious photoshopping of the "official" pics ... )

Sorry to be a party-pooper.

It is really quite hilarious.
Top

This would be the second photoshopped photo that was created by a poster here - just to make fun of the official perps' photoshopping.

Although it is extremely tempting to go on a crazy spree of making obviously ridiculous pictures, we must keep the pressure on the perps for their fakery crimes and not join in on them.

That is, of course, unless you actually found this picture of Mr. Fetchett somewhere?

(Which at this point is sadly plausible based on the atrocious obvious photoshopping of the "official" pics ... )

Sorry to be a party-pooper.

It is really quite hilarious.

My 666th post! Watch out for the toads in your morning coffee Hoi!
Top

"When does the cheque come? In a couple of﻿ weeks?"
http://www.youtube.com/watch?v=HB8ezJ0V6tk

Excellent! Thanks for being so passionate Simon!
Top

*
So what sort of folks are running the VOICES OF SEPTEMBER 9/11 memorial website?

Here's what brianv found out :


Send your photo collection and your release forms, by mail, to:

Ms. Westphal is the managing director of Toffler Associates and advisor to senior executives in the public and private sectors on strategy, growth and innovation. She helps organizations understand the forces that drive change in their industries and the world, and identifies the best courses of action to create enduring success. Previously, Westphal served as a civilian in the U.S. Air Force for 13 years, and was the deputy director of Development Planning for the Space and Missile Systems Center. She earned a bachelor’s degree in electrical engineering from the University of New Mexico and a master’s degree in business administration from Webster University.

And here she is listed among her former friends/colleagues - before her career sky-rocketed ... and she got to sift through 9/11 'victims' pictures at VOICES OF SEPTEMBER 11 ...

I pulled one random colleague from that page...

Has his own wiki page no less

THE "9/11 TRUTHERS" VICSIM LOOK-ALIKES
Have prominent "truthers" lent their (younger) faces to some "victims" in the 9/11 Memorials?

This post is to summarize a hypothesis which has emerged due to a series of empirical observations - featuring some bizarre 'coincidental' aspects. As crazy as this may sound (but 9/11 WAS undoubtedly a crazy affair), we may find some victims in the 9/11 memorials which share remarkable facial AND name analogies with some well-known characters at the forefront of the so-called "Truth Movement". (all of them being notorious ...ehrm... money-makers.) Anyhow, looks like the Wearechange 'frontman' Lukasz is good at raising money...:

Paul Isaac(NY sentinel) wrote:
"I did a search on the New York State Court Unified Court System at (...) for Lukasz Rudkowski. Since Lukasz was able to raise $5k for the legal defense fund; why does he have a legal aide lawyer? What has he done with money he raised for a lawyer? More mystery involving Lukasz and large amounts of money."
http://rfkin2008.wordpress.com/2008/08/ ... ion-fraud/ Manny (who allegedly lost his uncle on 9/11) is also good at ...uh... raising money - in close complicity with his colleague Lukasz Rudkowski:

"Heather LaMastro has started attacking 9/11 Victims Family member Manny Badillo for being complicit in Luke Rudkowski’s embezzlement of funds promised to 9/11 first responders and for Wearechange New York’s operating costs. In past articles we have shown you that other members of Wearechange New York have begun to question where the money goes."
http://crotchshotradio.com/2010/12/17/w ... ezzlement/ Well...I trust we all know just how good Alex Jones is at raising money - for himself Looks like Willy, the "9/11 rescue hero", is also a master at the fine art of fundraising - for the victims families, of course !

Brian Good says: December 28, 2010 at 12:54 pm
Willie tells a great inspirational story–literally incredible! My favorite parts are the 22-story internal collapse that he alone witnessed, the $122 million he raised “for the community” that he alone counted, the hundreds he saved by “opening doors and letting people out” that nobody else seems to remember, and his single-handed rescues of “fifteen (15) persons” who turned out to be his co-workers in the ABM office who were in no danger and could rescue themselves just fine.
http://www.wearechange.org/?p=5320 We have a forum thread dedicated to Mr. Rich GROVE here: http://cluesforum.info/viewtopic.php?f= ... 2&start=30

Then we have, among the alleged 9/11 victims, a 'spitting image' of one of the "honorary" directors of the 9/11 NATIONAL MEMORIAL AND MUSEUM:
Robert De Niro (also known as a Hollywood actor in movies such as 'Wag the Dog"...): ...and I'll be damned if "John Moran" (alleged FDNY Battalion Commander)
looks nothing like (a young) John Mc Cain : This one was quite incestuous whereby the vicsim's mother Carol plays the grieving mother demanding justice, whilst daughter Janice is a dead ringer for 9/11 activist Victoria Ashley, who's expertise is disinformation. In other words slag off anyone who's not a plane hugger. 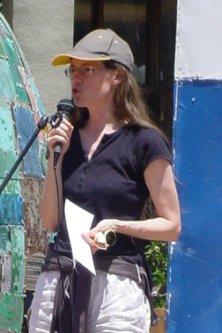 Edit: picture posted of Janice Ashley replaced, because of it being taken down from Voices of America site.