The most common objection people have to our research: "Too many people would have been involved to pull off such a massive hoax." Well, with trillions of taxpayers' dollars at hand, this operation could certainly afford contracting many individuals (under a gag order and on a need-to-know basis). Meet the real - and unreal - persons, companies & entities assigned to carry out this gigantic, media & military-assisted psyop.
Post Reply
First unread post • 94 posts

She should have a word with her barber also. He cropped her burns a bit high and sliced her ear good with that razor too! That earring looks a bit dubious too. I'd hate to sit next to her on an underground train, imagine looking around and seeing her *brains though her ear cavity! *[A hamster on a wheel most likely!!]

look closely - OVER A THOUSAND rescue personnel & volunteers? well, i make it around 29, but if you say so mr. lou angelli, filmlou@smugmug.com.

i wanted to get a second opinion on this so i tried to contact renowned photo-analysis expert jack white & get him on the case, but he said he
was too busy playing guitar for the white stripes, or something.

HaHa I'm a fan of Mr.white, he wouldn't have to look at these for more than a millisecond to determine what they actually are, a BIG PILE of NADA!!
Top

"Why the (expletive deleted) is a COMEDY SHOW the only place on TV to properly interview some of the actual first responders? I'm not American so I can really only go off what I saw on the Daily Show - but that's absolutely disgusting."

because the perps want to ingrain in the younger genereation ..that there were planes, first responders ..etc ... The youngsters are more apt to be open to REALITY ..i.e. ..what they WEREN'T shown ... the younger generation must be programmed with the false story...

just as smoking is strategically placed to entice kids early.. .. they are planting the seeds now ... They already have the FOX/CNN "folks" locked up and they are far less likely to change beliefs..

Have at the actors ... this one's a hoot... (I'm not saying that there aren't members of NYFD or Police or EMTs that may be suffering health issues from smoke/dust etc... god bless them ...)
Top

Remember heroic firefighter Pfeiffer? Naudet movie?
He arrives, discards his white officer hat, dresses in yellow firefighter suit, puts on yellow helmet, goes in.
Remember chaplain Judge dies, they carry him out, Pfeifer looking for escape route, goes back, nobody there.
Remember famous picture firefighters carrying Judge outside?
On one of the pictures taken outside, where firefighters are carrying the dead Judge, there is Pfeiffer in the background, in white shirt and white officer hat.
Due to the chronology of events, he later saves one Naudet: in yellow firefighter jacket and jellow helmet.
Of course, a gentleman always finds time to dress properly for an event, even during the worst terror attack in history.
(Perhaps I should have posted this in the Naudet topic, but no way will I retype).
Right now I am searching for that photo's link, will post if I find.
Top

Here is the photo. 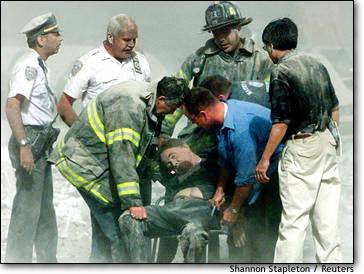 The guy on the left is Chief Pfeiffer as far as I am able to tell.
What do you think?
Top

It's amazing how often satire gets so much closer to the truth than mainstream media ever does.

Recognizes Those Who Rushed To Cash In On Tragedy

In an act that many are calling long overdue, Congress passed legislation this week to honor those Americans who were first on the scene to profit from the tragedy of Sept. 11, 2001.

The so-called 9/11 First Capitalizers Act, which passed by a wide margin in both the House and Senate, is the first measure to recognize the utter lack of sacrifice on the part of those men and women who did not hesitate to put their own personal agendas above all else when it mattered most.

"It is high time we paid tribute to those who sensed the direness of the moment and immediately sprang into action on that terrible day, exploiting it for personal gain," Sen. Lindsey Graham (R-SC) said Tuesday. "These were the thoughtless men and women who selfishly showed us that in desperate times, the most callous among us will always be there to step forward and do whatever it takes to get a piece of the action."

"They sacrificed their dignity and sense of basic morality so that others might one day give to them," Graham continued.
...
Among those Americans recognized were "United We Stand" T-shirt manufacturer Gary Tabano, country artists Toby Keith and Lee Greenwood, Halliburton CEO David Lesar, filmmaker Oliver Stone, former president George W. Bush, and 89 members of Congress itself.

After apologizing for the "needless delay" in honoring the shameless bottom-feeders, lawmakers confirmed the measure would establish a special fund for the 9/11 First Capitalizers, helping those individuals collect whatever funds and resources they somehow didn't manage to rake in hand over fist in the hours, days, and months following our nation's darkest hour.
...
"I'm no hero. I just did what any opportunist would do," said World Trade Center leaseholder Larry Silverstein, who tried to collect double on his $3.5 billion insurance policy by arguing that the towers had been hit by two separate planes. "After all, I couldn't just stand idly by and do nothing to benefit myself while the entire country suffered."

Congress also announced that it would be dedicating a special plaque on the National Mall containing the names of all 12,554,310 Americans who eventually capitalized on the tragedy with their bullshit advertising, partisan rhetoric, forgettable novels, defense contracts, and all-around cheap, manipulative sentimentalism.

In related news, the White House announced this week that work continues apace on the multitrillion-dollar monuments to the exploitation of 9/11 currently underway in Afghanistan and Iraq.

How very - and ridiculously - strange.

It was the gravest disrespect for a fallen cop.

The city was so hellbent on proving that an NYPD cop didn't die of a 9/11-related illness that morgue workers were dispatched to a funeral home to take away the body while his grieving family was holding memorial services, The Post has learned.

"Ten minutes before the wake, the Medical Examiner called us and said they need to reclaim the body," said Howard Wong, 40, whose brother, George, died after a two-year battle with gastric cancer Thursday at age 48.

"The Health Department had issues with the wording on the cause of death -- that he died from exposure to 9/11 toxins -- and they ordered the Medical Examiner's Office to do it over," Wong said.

It was the gravest disrespect for a fallen cop.

The city was so hellbent on proving that an NYPD cop didn't die of a 9/11-related illness that morgue workers were dispatched to a funeral home to take away the body while his grieving family was holding memorial services, The Post has learned.

"Ten minutes before the wake, the Medical Examiner called us and said they need to reclaim the body," said Howard Wong, 40, whose brother, George, died after a two-year battle with gastric cancer Thursday at age 48.

"The Health Department had issues with the wording on the cause of death -- that he died from exposure to 9/11 toxins -- and they ordered the Medical Examiner's Office to do it over," Wong said.

The WONG's seem to be all over the 9/11 hoax, it seems...Hmmm...Methinks something is very wong with all this

So how many firefighters are there in the New York City Fire Department, did you know? Well - 11.000 of course!

There are 111 Irish firefighters also but apparently they are not worth counting.

simonshack wrote:*
So then what are these photos we now have from "Ground Zero", showing NFDY firefighters spraying more water on the flame-less heap of debris, trudging around the rubble with buckets, seemingly very much "in charge" of the area? Do these pictures somehow contradict our thesis that this was just a plain demolition job and that the NYFD was certainly not asked to clean it all up?

No clue if the photos are authentic Simon, all I know is that there are many articles regarding the lack of water in standpipes when the water supply was cut/destroyed on 9/11.


Changing Specs
The FDNY moved quickly following 9/11 to replace most of its apparatus fleet, with new orders and bids going out over the following several months. But it didn’t just copy the old specs. Instead, it made substantial improvements to its fleet based on lessons learned during 9/11.

All pumpers now have 2,000-gpm pumps with five lengths of hard flex suction hose and special intakes for drafting. This idea stemmed from the water main collapses that prevented firefighters from flowing water at Ground Zero. Now, every FDNY pumper ordered since 9/11 can draft water from any of the nearby rivers and supply other units on the scene.
Top

They didn't need high pressure water hoses there wasn't any fires at the ground level?
Top

Not sure if this is in the appropriate thread but didn't want to forget to post it up whilst trawling other sites.
Listen to what the narrator says at 0.22 seconds and the other girl Nicole seemingly witnessing bodies falling from the floors above her [she was on the 72/73rd].
I know this may be just a wild goose chase but to get 'facts' wrong about the plane [which, as far as the 'official' story goes existed, not that i buy into that at all] beggars belief.
Also, shame on Yahoo!.
Top
Post Reply
94 posts