Here he is on September 12, vomiting more lies about what he allegedly witnessed the day before:

How about "ozzybinoswald" is Mark Walsh?

I always wondered why fred was such a staunch supporter of obo's obsessions.
Top

SmokingGunII wrote:For those of you that haven't seen the earlier observations from Simon & myself within this thread, of the fake video that was aired that day, here you can see very clearly the missing row of windows on the white building to the right of screen @22 seconds.

simonshack wrote: Funny you should say that, Smokey... "Psycho Mark" Walsh of FOX News happens to be into 'cab driver strangling'...


I'm speechless. I hate the guy even more after listening to that. The day after 9/11 and they are joking about "losing Psycho Mark". His reference to the (non-existant) hijacker as a "towel head" should be enough for any reasonable thinking person to understand the motivation these guys had to fulfil their roles. And what was that shit about using his apartment to film Building 7 collapsing?
Last edited by SmokingGunII on Tue Nov 15, 2011 3:20 pm, edited 1 time in total.
Top

Equinox - this gives a better view:

I like the 2ng guy that was interviewed, after Harley Guy:

Newsman:
"Sir, could you talk to me -- What's your role out here right now?"

where do you think is the sun? Check the shadows in the video...

*
JAPANESE TV WAS "THERE" TOO

I just found this shot on a Japanese TV broadcast of 9/11: Compare with the "Harley Guy" interview: Now, before you start comparing the two shots (hint: check out the backdrop buildings), please consider the odds of both FOX TV's Rick Leventhal and this Japanese TV to choose the exact same Manhattan street corner to report from... Pretty odd, isn't it?

Next, make your own conclusions of how this possibly occured. Could it possibly be that both those street reports (FOX and the Japanese TV) were filmed in the very same greenscreen studio setup? Would this be the most likely explanation, perhaps? Or was it all just coincidental - and can those background buildings (and lampposts) look so different only due to 'parallax/perspective' issues?

It's all up to you - I'm not here to convince you of my own conclusions!

I’m no Expert, but is this some kind of green screen flaws?? 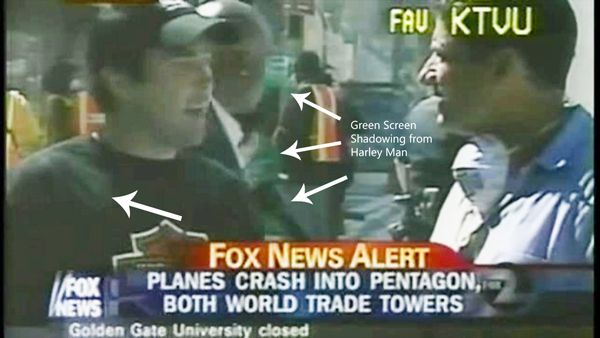 His hand seems to undergoing some kind of morphing technique, 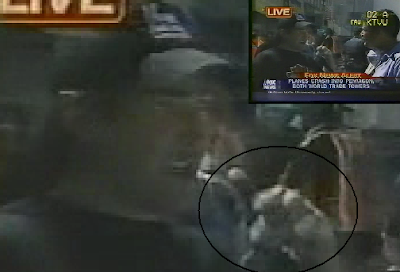 these shots it appears as the whole hand has been removed.
Possibly removed to hide recognition??? 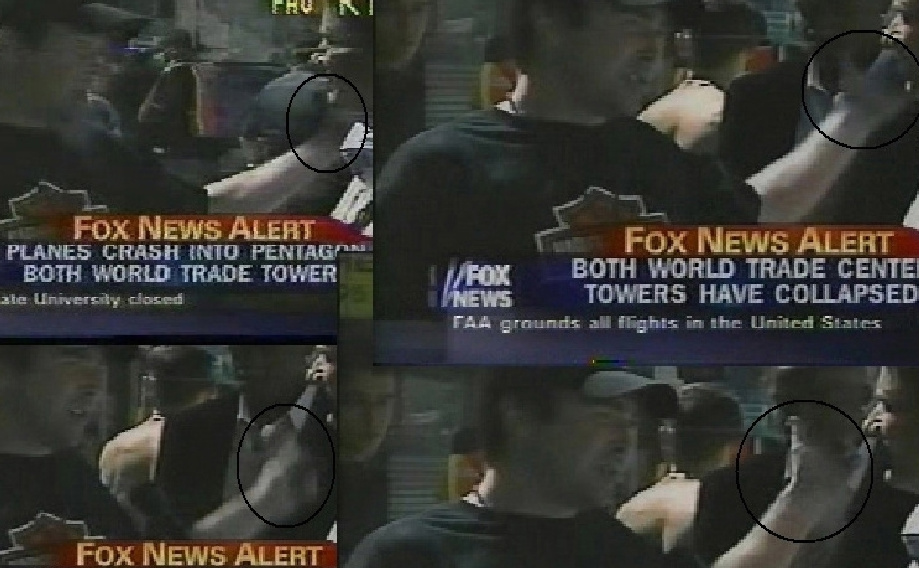 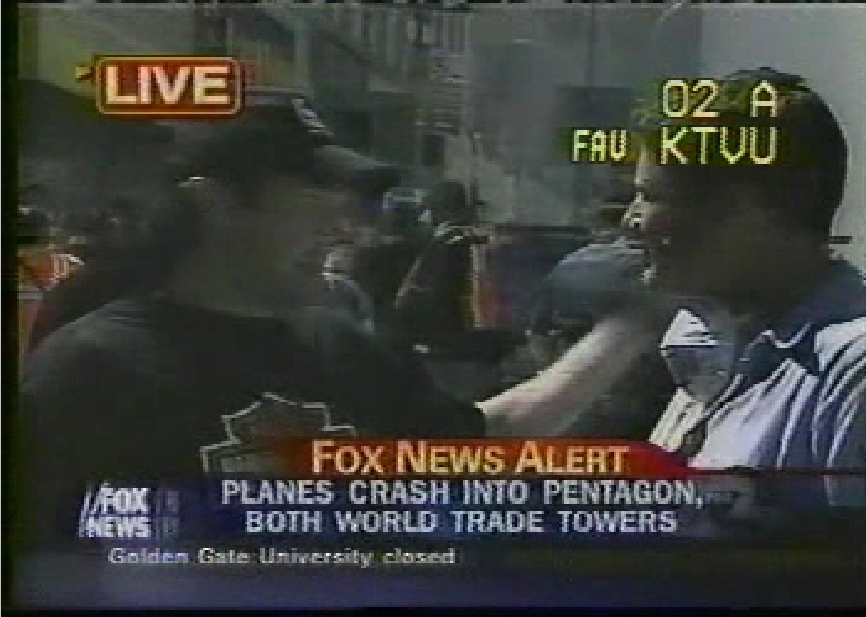 The top row of windows may have been added after 9/11.

A missing row of windows is a huge mistake to make, and I feel this would convince many skeptics of TV fakery on 9/11. I posted these images in the icke forum and said something about it could be a loft conversion (taking the piss

) but it turns out the windows might actually be new Here is an image I found.. You can zoom in on the pic @ the link.

I found a couple of articles also..


IN the 1850's and 1860's cast iron was a miracle material. The iron framing permitted the wider windows so important for retail stores, and also allowed for quick construction in mass-produced but highly detailed designs. Daniel Badger's 1865 catalog lists 19 cast-iron commissions on the two blocks of Chambers Street from Broadway to West Broadway.

Cary died in 1861, and although Cary, Howard & Sanger dissolved, the Cary family held on to 105 Chambers Street as an investment until 1950. In the 1920's, during their ownership, Church Street was widened and the Cary Building lost its easterly neighbors and gained its current corner position. Although some windows were cut through the facade after the street was widened, and more windows were added later, the Church Street side still presents an ungainly contrast to the delicately modeled cast iron.

In 1980 the Landmarks Preservation Commission designated the Cary Building as a landmark. These days the building, although mostly intact, looks forlorn, its upper floors vacant. Rust stains bloom over the entire facade, which looks like it has been dunked in tea. But a new owner, Chambers Street L.L.C., has begun a two-part restoration plan.

''The detail of this building is just astounding, how far they went to imitate stone,'' said Judith Saltzman, a principal of Li/Saltzman. She said her firm is examining options for replacing missing elements in cast iron, cast aluminum and fiberglass for an estimated cost of about $500,000.


In 1982 the Cary Building was designated a New York City Landmark, its architectural elements astonishingly intact other than the Reade Street columns that had, for the most part, lost their Corinthian capitals.

Twenty years later the Cary Building breathed new life. The building, called “a masterpiece of cast iron design” by Andrew Dolkart and Matthew A. Postal in their 2004 Guide to New York City Landmarks, was purchased by Chambers Street, L.L.C.

Today the Cary Building gleams under a coat of historically-accurate paint and looks very much as it did during the Civil War when Manhattan shoppers sought out their “fancy goods.”

Can't find any info for the renovations on their site

Plenty more to go on though

Dearest Flip/flop…. Don’t worry your on the winning team dude, you did the right thing and tried also bringing it to our attention. It’s even better you did because this footage has just been busted.

I really like it when we break down the imagery for what it really is. And Spotting things like the window may have been added on can get us to analysis the footage from a different light.
And I want to just say, the window was something we had not looked into 100% and was speculating on that one.
So just to confirm…. Yes it does appear another window has been added in there, The picture you supplied….

I was going to verify it sooner or later, But I guess I was taking a bit of a chance, with my construction knowledge. The windows would not be added too what seems like a small cramped attic roof.
And it does look like some recent rendering has taken place around this new row of windows. Suggesting they were added on recently to the already established building structure.

I decided to take another look at the 2 shots…

Pay attention to the extra 4 stories on the building.

From the perspective it is very visible.

It does not appear in the Fox shot!!!

There is whole top section of a building is missing.

I researched the schematics of the building and discovered that the building used to be only the original 5 storeys… And the extra 4 storeys ( the roof addition was added and completed in March 2001. )

8 Warren Street was built in 1912 but fully renovated in 2001 featuring a lovely roof terrace. Video security access in each apartment.

Article- was the terrace free at 38 Warren Street?


The Keystone Building is one of those multi-building conversions that almost justifies being referred to with the irritating multi-address that even some listings use (38-44). (There's only one entrance, so I call it 38 Warren Street, our listing data-base be damned.) A developer combined four 5-story buildings, and added four stories, with the first sales in June 2001. (Only 6 of 24 units had closed by September 11 that year, then only another 5 closed in 2002.) Typical for the size (only 24 units) and for Tribeca then (before the uber-lofts), the building has no amenities other than a roof deck.

Six of the units have individual, personal terraces, and the remaining units share a large common roof deck. Stunning Hudson River views can be seen from floors six through nine.

Dedicated to the people that always ask questions and those that lost their lives as a result of 9/11/ 01.

"I just come out of nowhere and just reamed my mouth off right into the inside of your ear, exploding through the other side...and then I witnessed my neighbours 4 storey new renovations collapse, one first then the second, mostly due to some bad 9/11 CGI calender failure because the 9/11 Bullshit hoax is just too intense."

To be sure, it makes perfect sense that such a late addition (early 2001) to a building would be missing in the backdrop scenery used for the greenscreened street shots: the 9/11 hoax was obviously prepared long before September 2001 - so it is quite 'understandable' that such mistakes were made. Ah thanks for that

Is there a clearer image than this? I will have a good look later but I'm at work atm and my boss gets the hump if she catches me on the internets

(edit, don't worry about a clearer image, I was having a moment lol. The extra storeys are blatantly missing)

Ah, just as I previewed this post I saw the lampost shenanigans posted by Simon