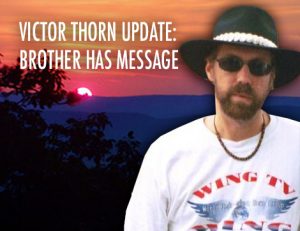 The alleged suicide - on August 1, 2016 - of the "Victor Thorn" entity (aka Scott Makufka) adds another pathetic note to the string of "suspicious / violent deaths of 9/11 truthers & whistleblowers". This continuous /relentless / predictable / and very, very boring saga scripted by the 'intelligence' agencies seems to be working well (for them). No one dares question the premature, violent death of a "fellow truthseeker", right?

Of course, we 'conspiracy theorists' (read: true / independent & honest freethinkers) are all meant to shit our pants at the (silly) idea that we might also be 'killed off' / or 'suicided' (in one way or another) some ugly day.

I remember this Victor Thorn character from the early days of my September Clues research (around 2007/2008) - what with his "WING TV" website which, for a while, timidly questioned the very existence of the "hijacked planes" of 9/11. At the time (and knowing no better) I tried to contact him ... to no avail. He just wouldn't respond to my mails. "How strange" - I thought to myself, "why would someone invested in this specific line of research (of the non-existing 9/11 flights) NOT respond to my e-mails - and just ignore them altogether?"

Here's why: "Victor Thorn" was - all along - nothing but yet another "intelligence agency" asset. To be sure, the 'breaking news' of his alleged suicidal demise originated from the "AMERICAN FREE PRESS" ("America's last real newspaper"), a crass / blatant CIA operation (posing as a "grassroot truther group") - if there ever was one :

Now, dear readers, do you think that I'm jumping the gun - or making gratuitous / callous assumptions - and thus "offending Victor's memory"? All I can say is: judge for yourselves- by listening to "Victor Thorn's" supposed brother, Bill Makufka, interviewed here by AMERICAN FREE PRESS about "Victor's tragic suicide". Make sure you don't miss Bill's excruciatingly phony, 30-sec weeping act - starting at about 3:10 into the below video:

Quoting Bill:
-"I basically haven't turned on the news in two days..."

Nobody has jumped any guns here !
•
Thorn was promoting his 911 material very (too?) early and promoted his book "9-11 Evil" as "the most dangerous 9-11 book ever written",,,
Kind of reminds me of "the wickedest man in the world" Aleister Crowley (by interference he might then be suspected of some nasty intelligence agenda too).
•
Whenever these "researchers" are too prolific, show up from the get-go and have a suspiciously crafted stylized and artificial look with:
a) a hat
b) beard or moustache
c) glasses and/or sunglasses
d) weird hairdo or too much/little hair (ex. Rense / Corbett)
e) consistent and specific clothes style, mostly "retro" (well, they have 2 wardrobes of course, 1 for stage acting and 1 at home,,,)
•
Thorn was born & suicided on a satanic ritual sacrifice day and with his brother's "piss-poor acting" as C Kendall coins it, it seems evident Thorn was a plant. He can now enjoy life without his conspiracy outfit: no hat, no sunglasses, no beard,,, good luck recognizing him !
---
Lammas Day https://en.wikipedia.org/wiki/Lammas
post on the subject over at Fakeologist http://savechat.fakeologist.com/2016/08 ... es-on-his/ Thanks for keeping us updated on these fringe lunatics Simon. I only had cursory exposure to WING NUT TV. Instantly forgotten. Good riddance.
Top