If NASA faked the moon landings, does the agency have any credibility at all? Was the Space Shuttle program also a hoax? Is the International Space Station another one? Do not dismiss these hypotheses offhand. Check out our wider NASA research and make up your own mind about it all.
Post Reply
First unread post • 597 posts

lux wrote: Of course, at least some of these launches seem to be video composites of some kind and others seem to be scaled down models filmed in slo-mo so my points may all be moot when the fakery aspect is taken into account but I'm just trying to describe "what's wrong with this picture."

Of course, Lux, of course.

I think what we are doing here is a methodical, no-nonsense and - dare I say - truly scientific exposure of NASA's formidable lies. As we go along, we justly try to look at the absurdity of their claims from all possible aspects and angles. My above little foray into the purported climbing rate of NASA's Maven rocket ("bound for planet Mars"), showing that an old F-4 Phantom jet would be twice as fast as that rocket, was only to put these absurdities into perspective for more 'aeronautically-minded' people (as opposed to 'photographically-minded' folks).

Another aspect is the (extremely slow) speed these rockets appear to take off at. In a video analysis I made last year, I timed the first 100m of flight of an Atlas rocket ( similar to that which, we are told, launched the MAVEN spacecraft). Here are the results:

Are we to believe that these modern, unmanned NASA rockets lift off at bicycle speed (in their first 11-or-so seconds of flight)?
Top

I guess NASA thinks it's more cinematically appealing to have their fake rockets float majestically skyward at a slow and easy pace so we can all gaze in awe at the grandeur of it all.

I suspect that NASA's rocket design technology hasn't actually advanced much beyond the V2 and that the V2 may be about the largest liquid-fueled rocket that is practical to fly.

The V2 rocket was very popular in the postwar era through the 1950s. It was used in many movies that showed rockets taking off, etc. and I think the V2 did actually fly (though probably not as high as claimed). Then, in the early 1960s came the Mercury Program with its Atlas rockets and things started to look phony. Could the Atlas have been just a V2 with cosmetic changes and more smoke and flame added for effect? I think it's possible.

If that's true then why build anything more advanced than the V2? Just use better special effects to make it look like bigger and bigger rockets.
Top

Lux wrote:
And, this is purely a subjective opinion but the rockets just don't seem large enough to hold enough fuel to maintain their engine burn long enough to rise 50-60 miles or whatever is theoretically required to do what they're supposed to do. I mean, when I see that flame pouring out of that skinny rocket it always looks to me like the fuel is going to be used up after only a few minutes at most. And, going as slowly as they seem to be going, I just don't see how it's going to make it more than a few miles up, if that

Know what you mean Lux.

Researching various aspects of.. ‘Does rocketry work in a vacuum?’ I looked into the stats of the most talked about rocket engine of all time, the mighty, awesome, most powerful ever; Saturn F1.

Here’s a famous fountain in Geneva that I’ve seen on a couple of occasions which makes for an extremely impressive sight..

The ‘Jet d’Eau’ squirts a half ton a second out the nozzle http://en.wikipedia.org/wiki/Jet_d'Eau via dual .5 MW electric pumps that supports (at any given moment) a total of approximately 7 tons of water in the air.

But that’s nothing, in fact a child's water pistol in comparison to the F1 since we are led to believe that 2,169 tons of fuel / oxidiser is consumed within 150 seconds http://en.wikipedia.org/wiki/Saturn_V which equals 14.46 tons per second, divided by the 5 engines and you get the equivalent of 5.784 Jet d’ Eau’s each! Flippin’ flamin’ ‘eck!!!.

To elaborate a little further, here’s an image of Rocketdyne’s F1 injector head.. 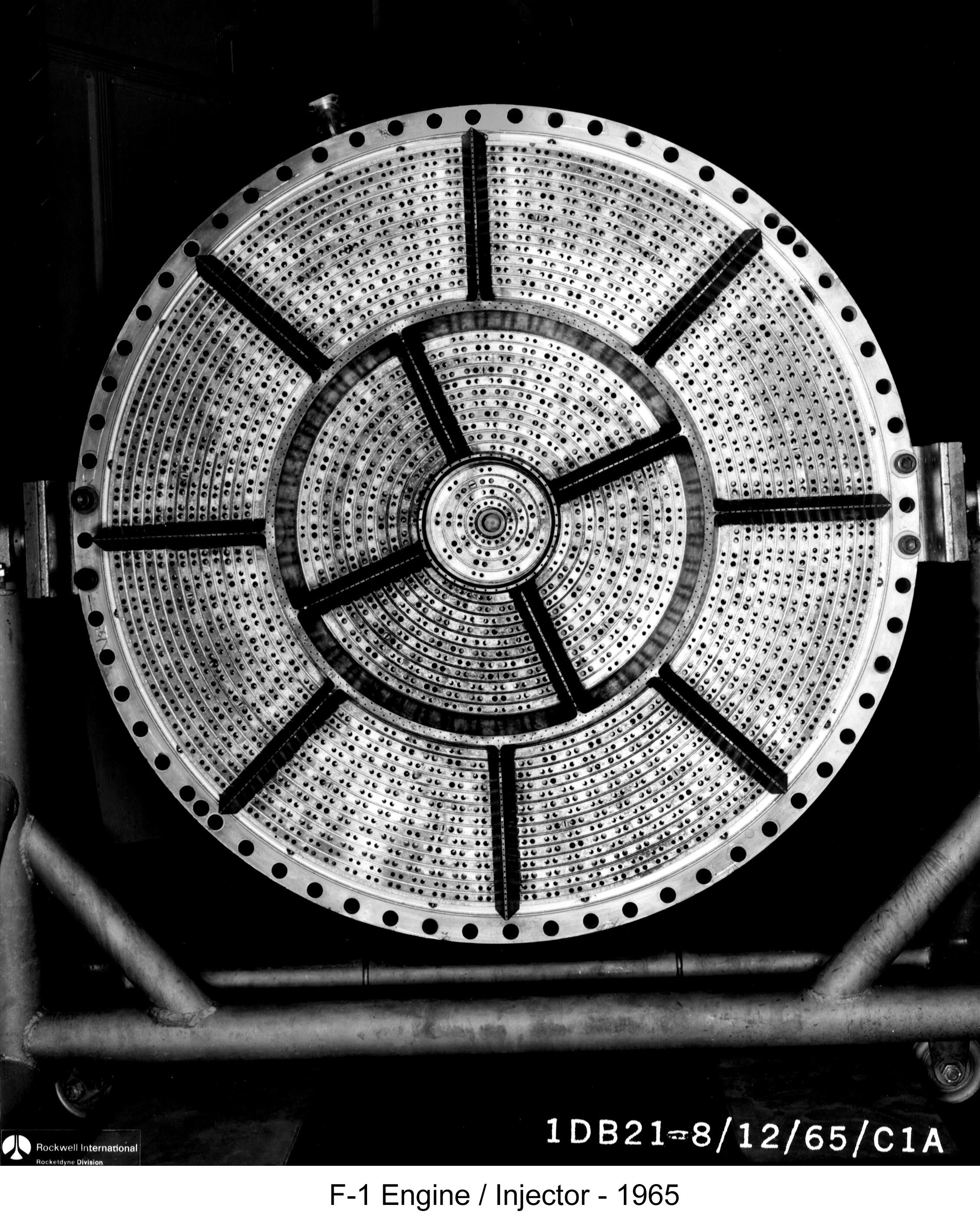 ..a glorified manhole cover, just short of 1 meter in diameter with small holes drilled through it to allow those 5.784 Jet d’Eua’s worth of fuel and LOX to escape every second. But not unhindered may I add, since the expanding force of the ignited fuel within the main combustion chamber was reckoned to be 70 bar (1015 psi...check the Wiki link). Crickey! What sort of pump is going to deliver that kind of volume under that kind of counter pressure? Well, that would be this little guy...

I can’t find any dimensions, but from photos of the whole F1 assembly I’d say that this remarkable piece of kit was no larger than a standard set of bag-pipes.

As best I understand it, the gas generator is basically a little rocket utilised to feed a larger rocket. Fuel and oxidizer are fed into the bomb shaped combustion chamber and ignited which produces high pressure gas which is then piped into a turbine assembly which in turn drives the propellant from the main tanks via pumps through Rocketdyne’s giant shower head of an injector plate to be burnt with a resulting pressure of 70 bar. Here’s a typical schematic...

The story goes that this ‘pocket rocket’ developed some 50,000 horse power or just over 37 mega watts. To be sure, that’s 37 times the combined effort of the Jet d’Eau’s pumps seen here.. ..or 37 of these comparatively cumbersome V16 1MW diesel gen’ sets..

Also, I think I might be a little concerned about keeping our pocket rocket cool. Wiki says that the fuel / Oxygen mix was fed ‘rich’ and this somehow negates the need for any kind of fluid cooling or even air vanes...yup, just squirt in your propellant, light her up and you’re good to go. No screwing about with fans, radiators, water pumps or any of that daft nonsense that you’d find on your average family motor producing, say, 1 / 500th of the power.

Just one other thing that I’m not too clear about. As said, if you have a feed system shoving propellant into a combustion chamber, that system must operate at a higher pressure than the combustion chamber itself as 1 bar certainly isn’t going to move into 2 bar. Fine, I guess if you’ve got 50,000 hp at your disposal but what’s feeding the ‘pocket rocket’? Itself? Or are the fuel and Oxygen tanks permanently pressurised (no matter how full / empty) way above 70 bar?
Top

*
What an excellent point and post, Scud . I wonder how a 'rocket scientist' could argue with that.

India has successfully put a satellite into an orbit around Mars, becoming the fourth nation to (LIE ABOUT) do(ing) so. Only the US, Russia and Europe have previously sent missions to Mars, and India has succeeded on its first attempt - an achievement that eluded even the Americans and the Soviets.

You may recall in November, 2013 India claims to have launched their Mangalyaan Mars mission and, like clockwork, they have claimed success!

Notice the enthusiastic applause and skip to 4:32 for the proof.

Hey, if India can do it then WE should send a rocket to Mars! The Cluesforum Mars Probe!

lux wrote:Hey, if India can do it then WE should send a rocket to Mars! The Cluesforum Mars Probe!

Fuck that. We'll beat those NASA clowns. CluesForum is going to set up a base on Pluto!

Mars_launch.gif
Okay, where's our press conference?
You do not have the required permissions to view the files attached to this post.
Top

It would look like Chris Hadfield - or whatever that clown is called!

simonshack wrote:*
What an excellent point and post, Scud . I wonder how a 'rocket scientist' could argue with that.

I second that!
Top

This guy has a bunch of videos showing images from the “Mars” rover where he focuses in on odd shaped rocks and other features and implies that they are “alien artifacts” and he obviously believes that these images really come from Mars.

What I find hilarious about this video is that he really seems to have spotted something that no one has noticed before (to my knowledge) in one of the rover photos: flying insects.

He's spotted what appears to be lots of flies or other insects buzzing around the rover which makes sense to those who know it's all a hoax but HE thinks they must be Martian bugs! His title for this video is MARS INSECTS SWARM CURIOSITY ROVER.

Anyway, this gives us something new to look for in these fake Mars photos.

When I was in Australia, be it the roads of the coast or nearer the red earthed outback, I was constantly swarmed by hordes of flies, which would grow from the agricultural farmlands in the area — particularly those containing cows and such — and apparently spread all over the continent. They liked to attach to anything moving in order to search for moisture and presumably nutrition.

The behavior of the swarms and the red earth is consistent with the idea that this was shot in the outback. If so, my guess would be that this would have been done particularly in the areas that the U.S. military owns, where nobody below a high military clearance is allowed and where rock formations would be incredibly unlikely to be recognized due to the land's undisclosed appearance behind military borders.
Top

Flies invading Mars? Figures...that's probably because there are no (fly-eating) birds up there:

With the flies and birds on the "officialest" of official pictures from spaaaaaace, I think we are all going to have to reconsider a lot of what NASA claims is its reason for existence, and its reason for producing the pictures it does. The excuses they will have for these is likely to be rather side-splitting.
Top
Post Reply
597 posts