If NASA faked the moon landings, does the agency have any credibility at all? Was the Space Shuttle program also a hoax? Is the International Space Station another one? Do not dismiss these hypotheses offhand. Check out our wider NASA research and make up your own mind about it all.
Post Reply
First unread post • 1388 posts

Suck it up, conspiracy theorists, because soon your cuckoo stories about the US simulating the Moon landings will be over forever.

so, that's it. we will get brand new (faked) photographs. game over conspiracy theorists!

And, the propaganda beat goes on ...

[Buzz Aldrin aka Doc Rendezvous]
I'll tell a story 'bout my time on the moon down
The sky was black even though the sun shined down
Moon walking is a trip, it's so fine
When you're walking in the lunar dust

[Buzz Aldrin aka Doc Rendezvous]
Are you ready to put on your spacesuit?
Strap in for the G-force liftoff?
Countdown is getting very close now
To the adventure of a lifetime

I've been there, now I say it's your turn
All we've got to do is make the engine burn
Let's take a trip on an orbital spaceship
This is how we will reach the stars

I was just looking at the famous Apollo 17 picture in which wheel tracks are visible although the lunar vehicle has not yet been assembled... 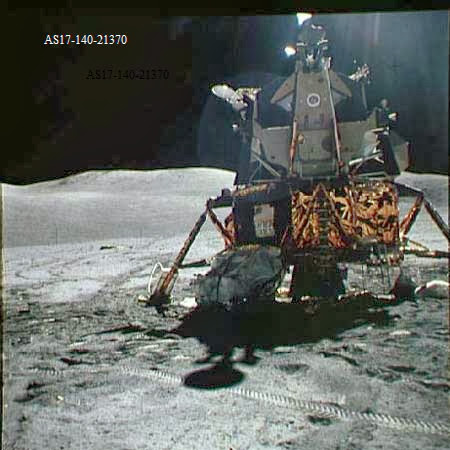 ... and it occurred to me that the track in the foreground must be that of a "moon bike" (despite the difference in tread pattern). 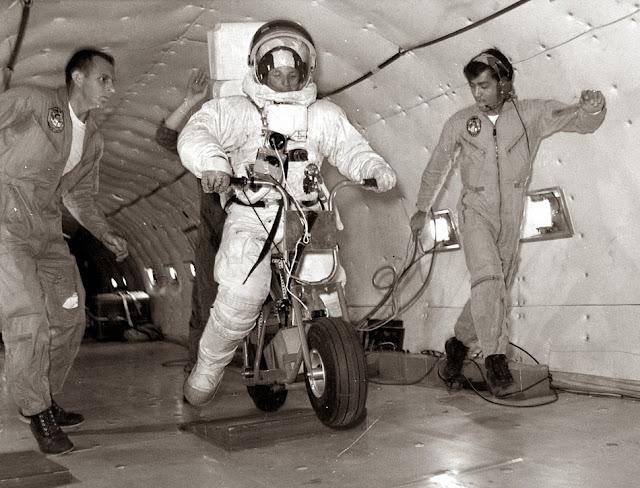 According to one source,

The above photograph was shot on August 1969 aboard a KC-135, endearingly known as the Vomit Comet, as the bike underwent partial gravity test simulations.
http://www.visordown.com/snippets/motor ... 20299.html

Must be fun to perform these tests. I wonder how the air-walker on the right is being helpful.

The clumsy addition of the rear wheel, the impossible shadows and the blur behind the left foot and under the front wheel are within the expected range of anomalies for NASA images.

edit: I forgot to say: officially, the moon bike never made it to the Moon.
Top

I don't think this exact piece has been linked to, before, from Clues.

The work of John Watkins is interesting (he was the original Nufffrespect on YT).

This, 'The $30 Billion Dollar Scam', is a few skillful minutes-worth of interwoven clips regarding the unreal Apollo moon landings. A useful composition, easily digested, and worth watching.

Just one more Apollo phonygraph - for the record ...

Wikipedia stil has this infamous image up ("source:NASA"). The caption goes:

"During the first EVA of Apollo 17, Eugene Cernan photographed Harrison Schmitt with the American flag and the Earth (400 000km away) in the background. The chest-mounted RCU and the camera bracket are clearly visible. Cernan is visible in the reflection in Schmitt's helmet visor in the awkward position he assumed to obtain this image."

Awkward indeed... and what a weeny little Earth! Isn't it supposed to be 4x bigger than the Moon?

The 'mystery' is easily solved - if you only put this image in an image editor and toggle & play around a bit with the various contrast / luminance / tone levels. This image was most likely made somewhere else than on the moon. What do you think? Does anyone know how to "black box" the energy required to heat/cool the Lunar Excursion Module? They have black box heat schedules at some websites to estimate your energy requirements for home heating with various insulation levels (r factors) but none of them go up to 250 degrees Fahrenheit. No f'ing way they could have done that. Anyway, saw this on European Space Agency (ESA) site: "Once Lunar Lander is on the Moon, it immediately deploys its high-gain antenna so that it can communicate with its terrestrial controllers." "High-gain antenna" why in hell would they even print that? It is like saying: "there was a hush in Carnagie Hall as the great composer sat down at the tuned piano.
Top

Lazlo wrote:Black Box
"High-gain antenna" why in hell would they even print that? It is like saying: "there was a hush in Carnagie Hall as the great composer sat down at the tuned piano.

Its a colorful way of writing to further engage the reader and suck them into the story. Hemingway made a bunch of funny footed cats famous off of it. No one cares about the stories he told, but how he told them after all.
Top

One moon hoax corroborates the existence of another moon hoax!


In a moment of lunar synchronicity, a moon-orbiting NASA probe spied another one of the space agency's spacecraft from its spot in orbit.

The images and text of this story are just too silly for words so I will simply direct forum members to the article:
http://www.space.com/24477-nasa-moon-pr ... hotos.html

It just goes to show that the general public will swallow anything that NASA says or does.
Top

My apologies if this video has been posted and I've missed it (I've gone through all of the Moon Hoax thread at some point and searches yielded nothing). This is the first time I've seen this footage of the Apollo 11 asstronuts arriving live and waving for the cameras at the Hornet for "quarantine" which is essentially a trailer and Hollywood prop. The entire thing is scripted including their silly costumes, studio lighting, etc. It's like Sesame Street meets M.A.S.H. This might just be the funniest and most absurd Apollo asstronut video I've seen. Enjoy!

I love how from around 2:16 the spokesperson looks suspiciously around the room when he says "Moon germs".
Top

Although I have posted links previously here on Clues, to the excellent Apollo debunk analysis work of Le Hunchback / XPascal, I feel it's worth reciting it again.

Do please have a dig through the full indexed sections, but an area he seems to have substantially updated since I last visited is the Apollo video content:

Le Hunchback is extremely-detailed in his thinking, and seems very capable in rebutting any counter-claims that are dumped onto his YouTube channel.

His work is seriously worth looking at, both if you know of it, and if you don't.
Top

I was having a discussion recently about this, and pointed to the transparent astronaut example of why it was a hoax. The person responded in saying that the cameras that were used back then were called vidicon and that they created a ghosting effect and this was the reason why.

Is it possible that they used these vidicon cameras when making the footage in their studio?
Top

ShaneG wrote: Is it possible that they used these vidicon cameras when making the footage in their studio?

For all we know, ANY cameras might have been used in their studios.

Wouldn't a better / easier question be:

"Is it possible that Armstrong and Aldrin brought vidicon cameras to the moon ?"

ShaneG wrote: Is it possible that they used these vidicon cameras when making the footage in their studio?

For all we know, ANY cameras might have been used in their studios.

Wouldn't a better / easier question be:

"Is it possible that Armstrong and Aldrin brought vidicon cameras to the moon ?"

Yes, I agree that would be easier. As a person who doesn't have 'insider' knowledge, we can presume certain things about these stories but I suppose it doesn't matter much about specific things that are out of our control.
Top
Post Reply
1388 posts