If NASA faked the moon landings, does the agency have any credibility at all? Was the Space Shuttle program also a hoax? Is the International Space Station another one? Do not dismiss these hypotheses offhand. Check out our wider NASA research and make up your own mind about it all.
Post Reply
First unread post • 795 posts There is a website to have claimed to have found it, a picture of a young Yale Judith Resnik. Here is a picture of Yale Judith Resnik today for comparison. Challenger Judith Resnik died in 1986. Yale Judith Resnik was practicing law and writing books at the University of Southern California at the same time:

Looks to me like Yale Judith Resnik and Challenger Judith Resnik were leading two separate and well documented lives at the same time, so probably they are not the same person.

And this information was embarrassingly easy to find.
Top

And this information was embarrassingly easy to find.

After rereading my last post I could see how it may sound condescending, so I apologize if I have offended anyone. I was trying to point out that with all of us researchers here who have been passing those Challenger pics of Where Are They Now back and forth, no one thought to check the Yale Judith Resnik's background to see if it would show conflict of times versus location, least of all myself, until now. One would compare these to see if two Judith Resnik's existed in two different places at the same time. And yes indeed this is the case. And it's fairly well documented. Google USC Judith Resnik law to see for yourself.

Could the similarities between the two Judith's be on purpose? Perhaps.

I am asking myself, however, why I let myself be duped by someone else's incomplete research.
Top

This is getting more and more mysterious. 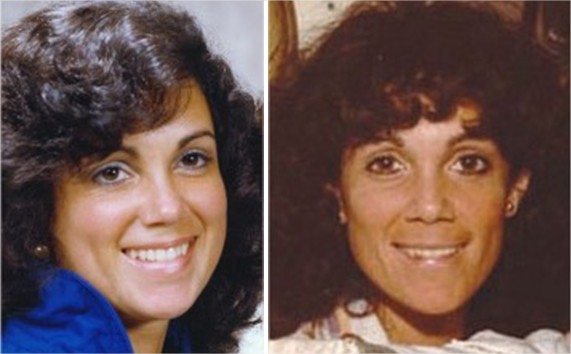 Where did that Challenger comparison come from in the first place? I think it came from this Veterans Today post:

The author of the post is Stewart Ogilby. Veteran's Today is some sort of controlled fountain of information which occasionally spews forth gatekeepers like Jim Fetzer. Perhaps Stewart doctored the picture to look more like Yale Judith Resnik. It is strange that in the article Stewart confesses it is just pure coincidence that the two Judiths have the same name and look alike, but are not the same lady.

So it seems the original article says the look-a-like Judith's are just a coincidence, but upon reposting the comparison image and story, the comparison moves from coincidence to evidence of a hoax. Was this Veterans Today goal all along? To pollute the internet with altered imagery in order to confuse?
Top

Take a close look at the scar on the chin.

To explain my previous post a little better, I went searching for images of "Carl McNair", purported brother of "dead" faux-astronaut Ron McNair, and found this photo:

I noticed the prominent scar on the chin, and went searching for better images of Ron McNair, to see if the scars might line up. Not too many pics showing the lower part of Ron McNair's chin (it's usually in the shadows, from what I could find). I also noticed Ron McNair seemed to have a gap between his teeth, kind of like his "brother", Carl, except his gap was to the left of his front two teeth, not between them. It would be real easy to push the one tooth over, creating a gap in the middle.
Top

To recap what O seems to be saying is this: This guy who owns the company with this logo looks an awful lot like this guy who died in this shaped shuttle explosion. In short, he's like a male Judith, alive, well and working. If you haven't found already, there is another two, Ronald and Ellison who roll together, talking about their 'brothers". Here they are in below link; in Hawaii while you are at work paying them to lie to your kids (Harriet is part of physics racket, bonus). http://www.hawaii.edu/news/2012/03/02/s ... ence-week/

Does it really mean this "When cows are in trees, the bullshit comes from above"? Clever. And before I get to Judith, I will say this, there are no real records for fake jobs, "astronaut training" is just a photo shoot, it takes zero hours to learn a fake task. The scarcity and authenticity of "Judith at space work" pics won't give you anything that couldn't be done with a few photo shoots, a razor blade and an airbrush. So, for the education of those who still think people are in space, I can go over her photo side. For the resident shadow hunters, it won't take long. * As for you Mr Powers, compare; http://airportjournals.com/wp-content/u ... 1025_1.jpg
http://mediad.publicbroadcasting.net/p/ ... _SPace.jpg
No comment required there.
Top

Probably the highest a space shuttle has ever flown! 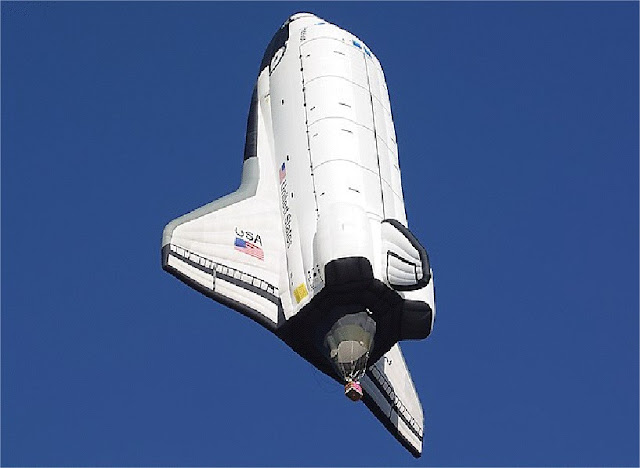 Re: ENDEAVOUR - & other modern NASA efforts

Brutal Metal » May 22nd, 2011, 8:44 pm wrote:I live in Florida and have seen it launch, Enough Said on this topic! I'm one of the Biggest skeptics in the fuckin word guys but sorry EVERYTHING isn't Fake! Apollo 11 Oh Yeah, Endeavor being a Real piece of machinery? Not Fake!

The landings were real but they were I believe a result of the glider mockup shuttles being released in high altitude from 747s:

I had to laugh recently as they are showing re-runs on the TV of all the James Bond movies.
The beginning of Moonraker has the shuttle stolen mid-flight whilst attached to a 747. The shuttle's 'take-off/propulsion' engines are started to allow escape whilst also destroying the 747 and crew.
Top

This is my first post here and I apologize if this has been posted earlier on some other thread (I couldn't find it), but I wanted to share this fairly recent find about Challenger in case you haven't seen it yet. You can see that there is man behind the space shuttle:

The second video is a longer version with some German guy commentating, but also contains another great blooper at around 4:50 when someone apparently "turns on the Sun" in outer space and the earth that was in complete darkness a moment ago becomes visible.
Top

*
Today, I was alerted (by an old friend) to the existence of this video (seemingly made by a German team of sharp students) published on YT in December 2016.

Now, I really ought to make this clear: the original source/ inspiration for my Challenger research was an article by one Darrell Foss, on "Opob news". This blog is now gone - but here's what I found on the Wayback Machine: https://web.archive.org/web/20150330023 ... rell-foss/

In other words, I do not claim any priority on this finding - but only as a 'developer' of the same.

For those who may think that I might have been a 'victim of a sophisticated set-up', I ask you:

Do you REALLY think that the American legal system would allow anyone to summon these 6 persons (suspected to be "crisis actors for the Challenger disaster") to appear in a court of law - in order to clear up the matter?
Top

That fork in the sky. They replayed that explosion where one smoke trail became two over and over like some of the 9/11 clips. I saw the 'live' explosion on t.v. and was horrified at the loss of life that I had just witnessed. The entire event was spectacularly publicized. The evening news reminded its viewers every night for several days running up to the event when to tune in to watch the space shuttle launch. We learned about the personal lives of an astronaut or two.

What if I were a magician, and say I had a special t.v. show to introduce my trick to the nation. What would be the one sure fire method to convince all these people that my trick worked out perfectly on 'live' t.v., what ever that trick may be?

Seems like the method is obvious. I would need help from the t.v. station manager, intentionally or unintentionally. Then I would film and or fake that trick in advance, add desired special effects and edit my perfectly successful trick in just the right way as to appear to not only work out perfectly but to be 'live'. I might even perform some impossible events to convince people of what an amazing magician I am. I would make sure there were viewing audience members who are witnessing the trick succeed as proof of its legitimacy. That means the audience needs to be filmed as well. I would pan the camera away from my trick often to film that audience so that the real viewing audience, which are the t.v. viewers, could be reminded often and convinced with out a doubt that this event is live, see, look at that live audience there on our t.v. sets. This must be a live show. Also, look at that word that says 'live' on the t.v. screen. Even the announcer from the t.v. station is telling us viewers this is a live show and he himself is watching this live show live with us.

When in reality all that's happening that night at the t.v station is that one guy with a laptop has to press 'play'.

What about the audience one might ask? Has anyone ever contacted a t.v. show audience member to verify if that person was actually at that 'live' event, and unless an audience member were a celebrity, how would one even go about gathering such intel? What if the audience is faked also?

As a magician, I would only include the bare minimum of people in on the real trick, which is that the actual trick was faked and filmed in advanced. I mean that's what I would do if I wanted to film something fake yet have 100% chance of success to make sure the nation thought my trick worked out stunningly and spectacularly perfect.

Seems ludicrous that this possibility is NOT EVEN REMOTELY discussed openly concerning events portrayed on a t.v. screen that we watch from our living room. Especially considering that there are people who make a living off of faking impossible events. We even celebrate especially well faked movie scenarios, like Jurassic Park.

Just press play, that's all ya gotta do and you are guaranteed success (or guaranteed failure)!
Last edited by Kham on Sun Mar 11, 2018 3:17 pm, edited 1 time in total.
Top

Today I bumped into this most interesting Challenger research by one "Dr. Eowyn".

Who really are the deadringer brothers of dead Challenger astronauts?
https://web.archive.org/web/20150715014 ... stronauts/

In short, Dr. Eowyn's rigorous search for the two supposed surviving "brothers"(CARL MC NAIR and CLAUDE ONIZUKA) of the two supposed Challenger astronauts (RONALD MC NAIR and ELISON ONIZUKA) shows that they have no birth records on file - i.e. they "do not exist"...
Top
Post Reply
795 posts