I always wondered how was it possible to achieve propulsion in the vacuum of space. Against what the thrusters "push"?

Well, apparently, they push against the fuel that they expel:
http://en.wikipedia.org/wiki/Reaction_mass

Other systems seem to involve the magnetic fields: http://en.wikipedia.org/wiki/Electrical ... propulsion
Personally I have no way to know if all this makes sense, so I'd have to think it does.
Top

The question is: does the Hubble have a means of propulsion? Is it alleged to include fuel and jets of some kind? It certainly wouldn't work to put a propeller on it.

''hoi.polloi''The question is: does the Hubble have a means of propulsion? Is it alleged to include fuel and jets of some kind? It certainly wouldn't work to put a propeller on it.

supposedly they do ...they call it the REACTION WHEEL : from wikipedia


A reaction wheel is a type of flywheel used primarily by spacecraft for attitude control without using fuel for rockets or other reaction devices. Quote "The sun unleashed an unusually powerful solar flare yesterday, the largest in nearly five years.
The eruption launched a ten billion ton storm cloud hurtling through space at five million miles per hour.
Scientists said the event took place on the side of the sun that was not facing Earth, so there will be little impact to satellites and communication systems."


The Mail continues....."Joe Kunches at the U.S. government's Space Weather Prediction Center in Colorado said there were reports of brief short-wave radio disruptions in Asia, but little else.
He said: 'We lucked out because the site of the eruption at the sun was not facing the Earth, so we will probably feel no ill-effects.'

The image was captured by Nasa's Solar Dynamics Observatory in extreme ultraviolet light at 131 Angstroms." The 'Satellite' in question, in a geobulls$%t orbit around the earth, takes a picture of an event which happened on the side of the sun not facing the Earth

This image was captured by the Solar Dynamics Observatory, or as NASA call it "Our eye on the Sun".

Solar flares will be a handy way of generating frenzy/panic in the near future? We are told also in the article.."Scientists have warned that solar storms could have 'devastating effects' on human technology when they hit a peak in two years' time.
U.S. National Oceanic and Atmospheric Administration assistant secretary Kathryn Sullivan said the storms pose a growing threat to critical infrastructure such as satellite communications, navigation systems and electrical transmission equipment.
Solar storms release particles that can temporarily disable or permanently destroy fragile computer circuits."

And for those living in Britain ( Danger lurks everywhere!! Just kill yourselves!! get it over with!!)

An enormous solar flare expected to hit Britain could blow out the national grid leaving the entire country without electricity, scientists warned in June.
Energy Secretary Chris Huhne is considering a raft of options to protect electricity supplies including switching off the national grid entirely, causing temporary blackouts.
It is believed that as the sun reaches a peak in activity over the next two years, it could unleash a 'class 5' flare, which might knock out computer systems and even throw satellites off course.
Scientists believe the flare would be up to five times more powerful than one which hit Quebec in 1989 and left six million people without power.
The initial blast from the solar flare could reach Earth in a matter of minutes. This would be followed by a second, potentially more dangerous wave of energy which would take up to three days to arrive.
It means the Government would have enough time to implement a contingency plan.
This could include switching off the electricity network entirely and ensuring planes are flown at lower altitudes in order to reduce their exposure to radiation.

The mascot of the Solar Dynamics Observatory ... 'Camilla Corona' ...(why not just call it 'Cock'?) 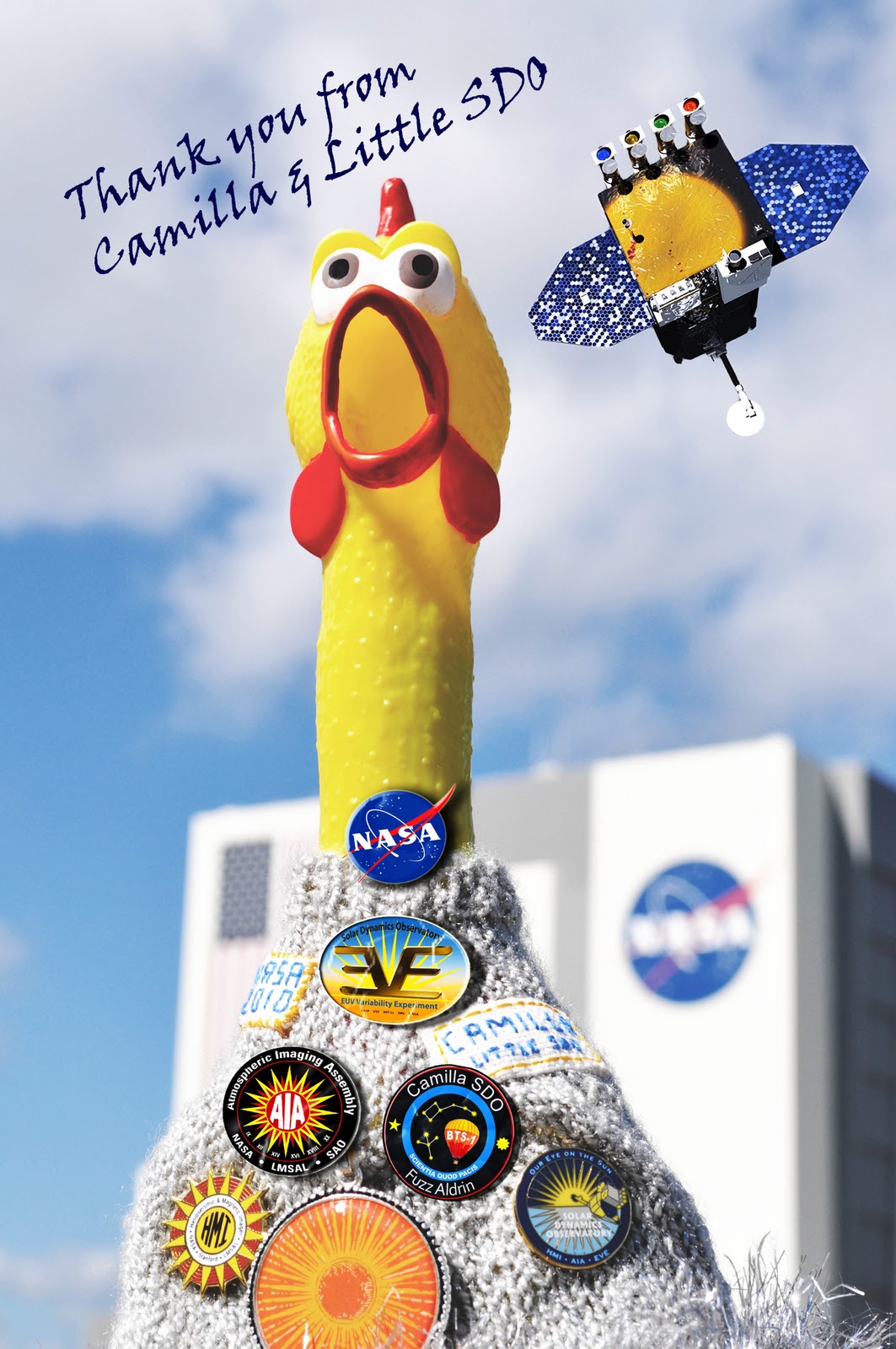 I am still catching up with reading areas of this website. In light of having read this thread, if you want you can incorporate the Satellite Musings here also, to keep a lower profile as noted in Simon's post above, feel free. Had I got this far, I would have posted here, originally.

As you can imagine, the lack of a propulsion system in order to maintain "stationkeeping" for Hubble, resonates with me. As well as the invincibility of all NASA spacecraft against all parking lot dings and fender benders in the crowded layers below the Van Allen Belts.

Not even a nut or bolt or natural cosmic debris has ever been a problem, it seems. Much less falling fuel tanks, decellerating rockets, satellites, dropped tools, meteors, other rockets servicing the ISS, shuttle missions, satellite launches, and the Hubble. Except when the Russian and US sats collided sending debris all over the place endangering...nothing, I reckon. Whew!
One imagines they have an Orbital Traffic Control tower to handle this : http://www.brighthub.com/science/space/ ... age/78643/

And that's not even talking about the keepers, that's just what they call "junk". lol.
I can't find the satellite map I was using last year. I'll post if I run across it again.
Top

Astronuts repair the bubble telescope (underwater -- light diffraction caused by water noticeable on the tinfoil cover of the piece to the right, if video accelerated)

DOG-PADDLING AROUND THE HUBBLE BUBBLE

From a BBC article describing the Hubble's disastrous flaws being fixed with "an unprecedented series of five spacewalks":

" A series of corrective mirrors were fixed to Hubble in an unprecedented series of five spacewalks on a single space shuttle flight. The in-orbit repair of Hubble was one of the landmarks of manned spaceflight."
http://news.bbc.co.uk/2/hi/science/nature/712418.stm

A landmark indeed! Or should we say " watermark" ?

WHY OH WHY do people still buy this crap?
Top

lol, the nut could not help it

Let me take this opportunity to quote my own post ( as posted in our Space Shuttle thread )...


Now, please know that NASA makes no mystery of the fact that they
have a giant pool to train their astronaughts for those 'delicate space tasks':

The problem is, the following NASA images are supposedly filmed in outer space during various shuttle missions:

(Can you see the scuba oxygen tank moving around inside the module above?)


It's all filmed in NASA's giant swimming pool...

I can also see three big bubbles in this sequence simon ...

And a burst of diver water bubbles in this one

''simonshack''We already know that Hubble has no thrusters. Shouldn't we learn more about the thrusters which all other satellites must be equipped with? And how these thrusters operate (supplying directional propulsion) in the vacuum of space?

this is serious matter here..

Yes this is a serious question regarding the moon and earth in their own orbits. I was wondering how do they maintain an orbit and not fall into the earth or the sun if they have no thrusters built in. The thrusters would push them up higher into orbit. Remember how the Star ship Enterprise would orbit a planet but if the engines died Scotty would start screaming for Di-lithium crystals or the orbit would decay. Why does the moon maintain it's orbit I wonder. The reason given is that gravity and centrifugal force balance each other.
Did you ever hear how the earth supposedly maintains it's spin? In it's early formation the accretion of matter forming together by the pull of gravity started the spin, and it continues to rotate because there is no friction to stop it.

But maybe the moon and planets are in an electric/magnetic groove of some kind so the don't need to perform a balancing act so to speak. Satellites in geosynchronous orbits are 22,236 miles high. The cruising altitude of the space shuttle has been equal to that of the International Space Station, approximately 211 miles.

The maximum theoretical altitude for the Space Shuttle has been reported as 600 miles. The Hubble telescope orbits at an altitude of 307 nautical miles (569 km, or 353 miles). That's the distance from New York city to Lynchburg, Virginia, USA. The Hubble Space Telescope orbits around Earth at a speed of 5 miles per second. So it seems that the Hubble could never come to a complete or partial stop to take a picture of a distant galaxy. It would have to track it with extreme precision. But how can it move on it's own to track an object as it's orbiting at 5 miles/second? Could rocket propulsion/thrusters be that precise I wonder.
Top

Jesus you guys badly need to open a science text book. Had such a laugh reading this thread – really big belly laughs. I really don’t know why you try to discuss things you know nothing about. Do you discuss open heart surgery in your spare time and tell the surgeon what he is doing wrong?

Just because you are ignorant and do not wish to learn does not make things fake, Shame on you!

For those that wish to be educated…

The Hubble has gyroscopes on board powered by its solar panels. Gyroscopes are a very interesting and have some peculiar properties. One being that they can maintain their orientation in space independent of the motion of the craft carrying them. Modern aircraft still use them for back up navigation in case GPS fails.

The Hubble is in a fixed orbit that cannot be changed. However to image a distant galaxy for example it simple uses its combination of gyroscopes to twist around to view the selected object. Once in position it can then fix on a distant point in space and maintain its orientation for weeks if it needs to despite the craft whizzing around the Earth every few hours. No thrusters are needed. It doesn't need to stop to take a picture lol.

If you don’t understand – ask a kid doing Physics at high school.
Top

stevenp6 wrote:Jesus ...
The Hubble is in a fixed orbit that cannot be changed. However to image a distant galaxy for example it simple uses its combination of gyroscopes to twist around to view the selected object. Once in position it can then fix on a distant point in space and maintain its orientation for weeks if it needs to despite the craft whizzing around the Earth every few hours. No thrusters are needed. It doesn't need to stop to take a picture lol.


Fixed orbit? Where? Whizzing around the Earth? You need plenty of speed to produce the centrifugal force, so this Hubble thing doesn't drop down on Earth! Around the Sun? Yes, Hubble is speeding or whizzing at high velocity around the Sun also with Earth ... it takes about a year. And the Sun/Earth/Hubble is speeding at another velocity in another direction in the Milky Way. While the whole Universe is either expanding or not expanding. It seems the father of Jesus didn't finish the job!

Yes a fixed orbit means it is whizzing around the Earth. Centrifugal forces don't come into it - just speed and gravity. Did you go to school?
Top
Post Reply
90 posts