I want to address some issues I have with these photos posted to an ABC News website: 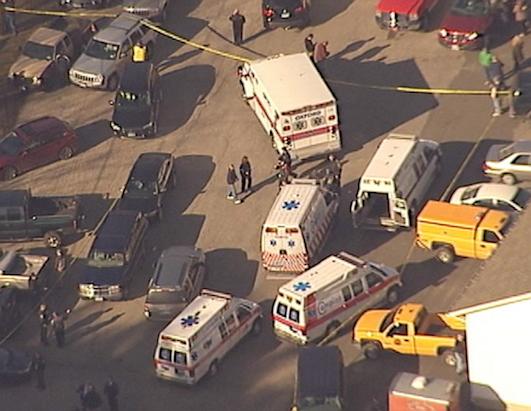 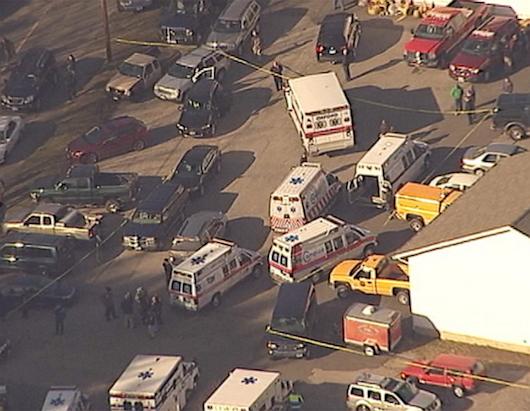 Now, is it just me, or are some of these shadows inconsistent? For one, if you just look at the image as a whole, do the shadows not look like they don't even belong? Secondly, look at the uppermost ambulance in the first image. The shadows of the two men are joined by the shadow of, I suppose, the side-mirror of the vehicle (???). It's in the second image as well.

Does that make sense from that angle? Is it something else entirely?

Gestalta, how about summing up the event first, for future readers? Just a couple of lines and a link at the top of the thread would suffice.

Anyway those are not photos but stillshots from a video that was visible on some news website right when the news broke out, right now it can be seen here: http://www.chicagotribune.com/news/chi- ... 8476.story
I don't think the video is fake per se. But you never know.

In the meantime more pictures can be found on the media, and yes some typical signs of fakery can be identified.
For example, Alicia's outfit is very familiar, as it shows a pattern that we have seen consistently since 9/11... 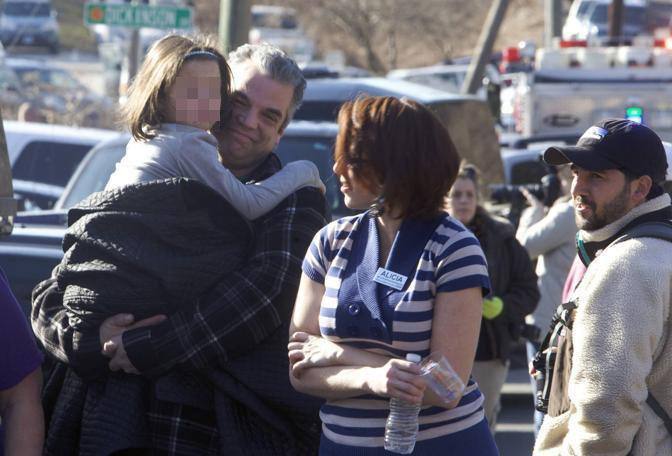 There's Alicia but are we in "wonderland"?
Top

Another very popular picture seems to be this one, visible on several news websites if not all of them: 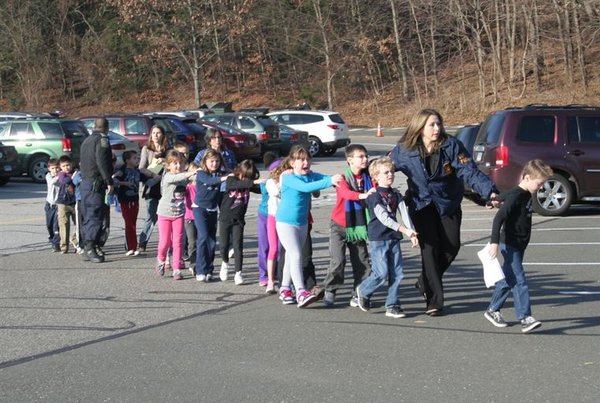 I don't see an immediate reason to think this is a photoshop product, but regardless: there is no doubt that the first pictures we see in these occasions are picked for their symbolic value rather than for their reportage content. In this case, I see the need for the kids to be "herded" and "protected" and be in presence of Police (no parents in the picture). Because they are "under threat" and "full of fears". These are the adults of tomorrow, as they can already be seen today in airports and jails.

EDIT: although, the street cone in the back is perhaps missing its shadow...

A name has been given as the alleged shooter, one "Ryan Lanza": http://www.mediaite.com/online/connecti ... yan-lanza/

EDIT: I am editing out my comments about the alleged facebook page of the alleged shooter, since apparently we are being told now it was the wrong facebook profile:

Sorry for the mishap better wait for more elements on this one.
Top Funding for the Entrepreneur of the Year Award is provided by a grant from the foundation of Brookfield industrialist and philanthropist Constantine “Deno” Macricostas and his wife Marie.

[Listed in Who's Who in American Business, he has been recognized by President Clinton and the executives of the U.S. Chamber of Commerce.

After coming to the U.S. in 1954, attending college and serving in the U.S. Army, Mr. Macricostas began his career in 1960 as a design engineer with National Semiconductor Corporation. From 1965 to 1969, he worked as an engineering manager for Qualitron Corporation, where he designed early photomask manufacturing equipment for the semiconductor industry.
Last edited by Euphoria on Fri Dec 14, 2012 7:45 pm, edited 2 times in total.
Top

This is the place in google maps:

Apologies for my hasty post, as I suppose I was in a bit of a "here we go" state of shock as I'd walked past a television displaying this event.

Additionally, these school shootings have become such a formulaic mainstay of our culture that I almost felt describing it would be redundant. Anyhow, duly noted.

In a lot of the images, it seems as though facial expressions do not reflect the tension and "sheer terror" of the scene. For instance, these two: 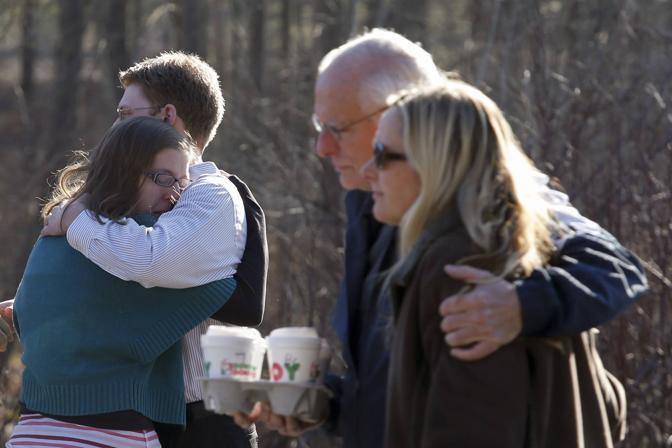 To me, her face reads: "Just another day at the school shooting."

If I'm not mistaken, it was temporarily thought that the shooting was conducted by more than one person, and that the police were searching the woods for the remaining individual. If this is true---and not just shoddy reporting---then I don't understand why, as usual, people are just casually milling about the scene.
Top

Quite simplistic code language, to say the least.

I no longer understand the function of these faked shootings - I thought they had run their course.
Top

Makkonen wrote:I no longer understand the function of these faked shootings - I thought they had run their course.

To keep the fear alive, methinks. This is crucial when all the real threats seems to be contained thousands of miles away from the rich countries. These everyday acts of gratuitous terror are just as necessary as major events like 9/11 to prevent people from getting too relaxed and thoughtful, one step away from starting to observe the world from unpredictable angles.

It is also important I think to notice how we are so close to the Christmas holidays. Days that are designed to be unenjoyable and yet full of expectations. Any event placed in this timeframe acquires even more significance.

Good call about hurricane Sandy, I hadn't notice this clear reminder to generic fear and catastrophe. "Sandy Hook" has also a "Peter Pan" sort of ring to it, which could be a wink to the fairy-taleness of it all.
Top

Here's a glimpse of several facebook pages instantly created to focus the attention on the alleged monster of the situation.

It is becoming really amazing the way facebook is being used as a psychological tool that perfectly fits the mindset of the scumbags behind these events.

Can't wait (NOT) to read and see all the rhetoric material about the vicsims.
Top

nonhocapito wrote:To keep the fear alive, methinks. This is crucial when all the real threats seems to be contained thousands of miles away from the rich countries. These everyday acts of gratuitous terror are just as necessary as major events like 9/11 to prevent people from getting too relaxed and thoughtful, one step away from starting to observe the world from unpredictable angles.

And, of course, yet another scam with the inevitable "donation drives"/"charities" and whatnot.

Actually I submit to anyone's opinion that maybe we should move this event to "General World affairs", waiting to be promoted to "Media deception". The number of "victims", the fact that they are mostly children, and the proximity to Christmas I think assure that this event will have a longer-lasting global resonance.
Top

Oh great! So FOX news "just happened" to send Rick Leventahl to report on this, huh?