pov603 » March 24th, 2017, 9:25 am wrote:'Interesting' picture above which, in the background, seems to show the couple on the floor in the exact same 'pose' (left foot off the ground) as the earlier photo above. Hmmm...

Aysha Frayde - A(h) Day's Fear. I had to look twice at that bus photo I thought it was a joke joke. The only thing missing from this heavily branded LIE is a "union jack" sticking out of that dummy's ass! Red Nose day is right Simon.
Top Yes well, for those incurable cretins who STILL think that those phony "tewwow attacks" are REAL, here are my questions to you sorry idiots:

Do you REALLY think that this woman underneath the bus would possibly STILL BE UNATTENDED TO - as the purported "Reuters photographer" arrived on the scene and snapped the above shot? If you think that this could possibly happen - in the REAL world - you have some extreme mental issues which I hope you will seek help for in due time - lest you ruin your life by becoming the laughing stock of REAL, thoughtful and intelligent people.

There. I said it.

You said it Simon!

More on this Reuters clown:

""I heard a thud, turned round and there was a man lying about 10 yards away from me," Reuters photographer Toby Melville recalls, describing the moment a man fell from London's Westminster Bridge to the pavement below during Wednesday's attack.

It had been a quiet afternoon in central London and Melville was taking pictures around parliament for stories about Britain's exit from the European Union."

Whaaatt? So there isn't enough stock parliament pictures and you just happened to be there with bodies falling at your feet?

Higher res pictures there - that looks like a different angle on the mannequin/bus pic.
Top So, maybe I'm seeing things again; or maybe our fallen man's legs were actually manipulated to invoke the Falling Man of the Twin Towers. I wonder if he was wearing his hood when he sprang/was sprung over the railing.

Of course with this photo, and that of Frade, since this operation was honing-in on posteriors, I can't help but reference common knowledge:

While some muscles spontaneously contract after death — and though all muscles eventually tighten into rigor mortis — others are loosening their grip entirely. Meanwhile, the part of your brain that regulates involuntary functions is shutting down. Specifically, the region of your brain that controls the muscles that hold your sphincter closed becomes incapacitated following death. Just like those rare occasions where you laughed so hard you peed in your pants, you will pee and poop in the spontaneous relaxation of your muscles following death. In fact, it’s not just the muscles but also the gas produced inside your body following death that will cause peeing and pooping. There’s really not much to say about this, right? Death is simply not pretty, nor was it meant to be.
Top

Another angle showing the London bus on Westminster Bridge. No one in the picture seems at all concerned about the 'body' still lying under the bus. The guy in red must have had to walk right past it.

mnew9 » March 25th, 2017, 4:44 pm wrote:Another angle showing the London bus on Westminster Bridge. No one in the picture seems at all concerned about the 'body' still lying under the bus. The guy in red must have had to walk right past it.

Yeah more branding with the stupid funfair ride. This image is at exactly the same moment in time as the previous. Where's is the other photographer? And the British gene pool is looking somewhat limited.
Top

Bad actors get the story wrong.

This is comical! Romanian tourist Andreea Cristea reportedly jumped off Westminster Bridge into the Thames to avoid being hit by the terrorists car. Strangely though, in the video released showing this, she appears to jump from the bridge AFTER the car has passed her!

A nice coincidence too, that the boat that first came to her rescue while she was floating in the Thames was one from City Cruises. The same company that was used by London police in their simulated hijacking of a tourist boat, training exercise on the Thames, Sunday March 19th...four days before the main event. Andrea Cristea being 'hooked' to safety!! Who took these, shall we say "photographs", for now? From where were they taken? From inside a building or was the "photographer" standing on top of a flagpole?

There is another reason for asking. Has the "photographer" been arrested?


It is an offence under the Counter-Terrorism Act 2008 to publish or communicate a photograph of a constable (not including PCSOs), a member of the armed forces, or a member of the security services, which is of a kind likely to be useful to a person committing or preparing an act of terrorism.

Now, in all seriousness, would you stand pointing a camera at a bunch of pepped up machine gun toting "policemen" during a "tewwowist attack"? Duh.
Top

The woman who jumps off the bridge is connected to a safety cord. When she jumps in and when the video is reversed you can see the rope. Amazing that a tourist would come fully equipped with life saving supplies!

What I find amazing is the speed in which the victims get a gofundme page set up for them.

The attack took place on March 22, 2017 whereby Melissa & Kurt Cochran were victims, Melissa was hurt and Kurt was killed.

Melissa needs funds to help cover her regular monthly expenses and loss of income. This fund is administered by her brother who is the family spokesman in this tragedy. He will deliver the funds to her.

Good to see Melissa in good spirits despite having just lost her husband. 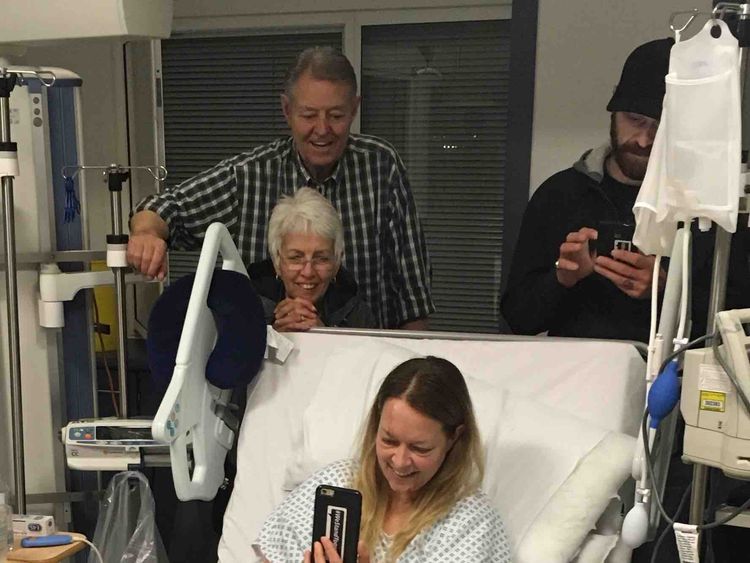 Mrs Cochran sitting in bed surrounded by friends and family and using her phone.

Maybe she is checking on her gofundme page, curiously mentioned and linked in the Sky article...

Wotcha folks, I've been a bit of a stranger for a few weeks, changed jobs, been travelling a lot as a result. Anyway, this whole mowing down pedestrians, knives, shooting shizz is totally by the book as far as I can tell. It's just a theory, but I think TPTB deliberately introduce inconsistencies into reporting, 'eyewitness' interviews, and media timelines etc., specifically to give the conspiracy crowd a load of stuff to get excited about, very quickly. The general public are consistently conditioned to regard those 'tinfoil hat' people as sad losers with no life, who stay indoors too much and would look at anything for as long as it took to find some excuse to regard real life as being made up, but really they are deluded fantasists.

By far the easiest way to make sure these inconsistencies occur is to be slapdash. And that's probably a lot cheaper too. Double bubble. The real money gets spent on making absolutely sure that the public don't get a whiff of the real secret, i.e. the media, including 95% of 'alternative media', are all totally controlled, and on the same page. For a person previously confident in the integrity of their chosen newspapers, tv channels, websites etc., to find out that it's all total horseshit is a very scary prospect, and probably explains why people so easily jump on the strategy of ridiculing any 'sad tinfoil hats'.

I must say, they have done, and are still doing, a really good job of this. It only works because humans in general are very easy to manipulate, much less clever than they think they are, and afraid of not belonging. And have very very short memories.
Top

About inconsistencies, Lenon Honor's work on the psychological condition of media followers is extremely well documented. I highly reccomend viewing his media work to get a grasp on the influences and trauma the public has suffered from media and government reporting of suspicious events.

Lenon Honor stands miles above the rest in authenticity, trustworthiness, honesty and transparency. Unlike most other dubious researchers such as Miles Davis, Lenon Honor is an open book and very public and therefore quite easy to vet. Lenon has uncovered the psychological influences of media and government. For those who wish to leave the speculation behind and gain some well documented insight, Lenon Honor's research is invaluable.

One aspect of reporting that Lenon Honor has uncovered is this: inconsistencies are intentionally put into stories so that they will be submerged into the subconscious. Stories that don't make immediate sense to the conscious brain are dumped into the subconscious for further processing at a later date. The consumer of media and government stories are then forced to 'remember' these stories as ones subconscious attempts to deal with them and attempts to make sense of them. Of course no sense will ever be made of these contrived stories as they are intentionally written to stay submerged within ones subconscious.