Discussing the most relevant "sequels" or "reminders" of 9/11. The so-called "War On Terror" is a global scam finalized to manipulate this world's population with crass fear-mongering tactics designed to scare you shitless.
Post Reply
First unread post • 7 posts • Page 1 of 1

Okay so this is gonna be my first real contribution post so I'll try my best to explain why I believe the "rallies" and "vehicular murder" that occurred in Charlottesville, Virginia on the dates of August 11th and 12th, 2017 were nothing more than planned gatherings of hired protesters and a hired actors to play the roles of the murderer/protester and mother/victim.

For those who aren't familiar with the event, I'll give you the gist of it.

The "Unite the Right rally" was a "white nationalists" protest that took place in the city of Charlottesville, in the state of Virginia. The protest was planned by a man named Jason Eric Kessler who was apparently pissed off at the mayor of the city because he was planning to take down a statue of the Confederate general, Robert E. Lee. Jason then started a petition to get the mayor kicked out of office and while doing so, he caught a misdemeanor assault charge. After obtaining permits to protest in the Emancipation Park he tweeted on twitter and uploaded a video about it and called for other "like minded" individuals to join the rally.

The first protest took place on the 11th on a Friday night when a group of "alt right/white nationalists" gathered at the Virginia university carrying lit tiki torches and chanted things like "the jews will not replace us", "white lives matter" "blood and soil" and other cartoonish lines. A brawl broke out between counter protesters at the rotunda and police eventually broke it up.

The second protest occurred the next day on the 12th in the Emancipation park with more "nazi sympathizers" and "white supremacists" wearing donald trump hats and shouting more retarded lines like "the Goyim knows" and "jews are satans children". The group known as "AntiFa" was now present at this protest and "counter protested" by getting into fights with the Alt-Right. Also alt right protesters were armed with guns and carried the confederate flag. Eventually the rally was deemed to violent to continue and police started breaking it up. After the rally fizzled out, one of the alt right protesters named James Alex Fields rammed his dodge challenger into crowd of counter protesters, hitting a parked van which in turn moved forward, killing a girl name Heather Heyer and injuring others. He then reversed his car (perfectly without hitting anyone else, navigating using the REAR VIEW MIRROR" and fled the scence and was eventually arrested.

Now the first thing I wanna focus on is the mother of "victim" Heather Hyers.

This is a video of the mother just 3 DAYS after her daughter was killed and is apparently ALREADY past the grieving stage and went straight into giving speeches to thousands of people about "taking action".

I wanna list some red flags out about her.

1.In the beginning she states that she had "trouble" finding pictures of her own daughter and had to facebook to get some (LOL what?). This lady looks 50+ years old and had to go to FACEBOOK of all places just to get a photo? No first day of school pics? No recreational childhood photos? Family reunions? No Christmas or Thanksgiving photos? come on now.

2.She talks in a professional, well composed manner and has a lack of stage fright for someone who probably doesn't give speeches to the ENTIRE USA on a daily basis let alone just lost her freaking daughter.

3.She goes to give a speech with a specific conviction and message for everyone, she wants people to "TAKE ACTION"....but against what exactly?

4. Throughout the speech she constantly said she doesn't want her daughter's death to be for "nothing" (as if she died fighting a war or something lol) and she doesn't want people to FORGET her death and even said "this is just the beginning of heather's legacy". Uhhhh what? Who the hell talks like that for someone who was randomly murdered? Watch a local news station with a story about homicide, the family wouldn't never say idealistic stuff like that not to mention they'd be choked up with tears and anger.

5.She says a couple of freaking jokes and tells us that we should feel like we have some "accountability" as if we could have done anything about an idiot randomly running over people. I suspect that this part was a shot at the lack of real people rallying behind gun control, internet censorship and other crazy laws the government tries to pass with false flag shootings and cases of live stream shootings and suicides.

6. She uses strange phrases that your average person wouldn't use like "let's have that uncomfortable dialogue" and "last night in NEW ENGLAND, they had a peaceful rally, in heather's name, to have some DIFFICULT DIALOGUES". I mean come on really?

7. Near the end she states that "if you're not outraged, you're not paying attention". Seems like a pretty blatant calling out of the lack of the people's support for these new crazy laws being passed and she's trying to "shame" us all for not falling for it.

8. She also says "Find what's wrong, don't ignore it, don't look the other way, make a point to look at it, and say to yourself what can I do to make a DIFFERENCE".and get this "THAT'S HOW YOUR GONNA MAKE MY CHILD'S DEATH "WORTHWHILE"". really??????!!! who would say that????

9. Complete lack of tears throughout the ENTIRE video, not even a stutter.

Now I shift my focus to the clown, Jason Kessler, the organizer of the rallies

Here is a video of him acting goofy after he obtained permits to protest.

He has all the hallmarks of your classic divide/conquer, racist, scapegoat, crazy conspiracy theorist.

Go through some of his videos, nothing but complete trash and contrived specifically to evoke emotions on both sides (left and the right). Basically another Alex Jones type.

Also my take on the protesters?

I suspect most of them were paid and were there to also evoke emotions in the american people, especially during this racially tense era. A lot were were wearing your typical Donald Trump hats and were portrayed as "white nationalists" and carried firearms (media trying to demonize loving your own country and race/guns). Also this new "controversy" surrounding confederate statues sweeping the nation in waves? Complete horseshit too, Just another glorified "confederate flag ban" event to happened after the other false flag shooting in Charleston a few years ago. Nobody gave a shit about these statues before (as most people wouldn't even recognize what a confederate looked like, especially in weather worn bronze statues) until this event occurred.

One more video of the mother before I get through

"I mostly don't have time to GRIEVE, I have a 'MISSION' to accomplish".......hehe that she surely does

OOOOOH and I completely forgot to talk about the apparent "murderer's" mother, I apologize for forgetting that part

This was an interview from "news outlet" of the mother of the murderer a DAY after the murder.

Red flags again for her and the video

1. How would she NOT know already that her son murdered someone when the story was literally ALL OVER SOCIAL MEDIA AND TV NEWS?

2. You can clearly see that she's disabled (or feigning), yet I can't spot any indication of disability tags on or in her car. The car has no special plate nor are the tags hanging in the rear view mirror.

3. She seems awfully underwhelmed and indifferent after apparently being told her son MURDERED and injured a dozen people.

4. The video has strange cuts in the middle of talking?

5. The video has an odd aspect ratio for being filmed by a news station. Looks like it was filmed with a freaking phone.
Top

Nathan Draco » September 12th, 2017, 3:49 am wrote:OOOOOH and I completely forgot to talk about the apparent "murderer's" mother, I apologize for forgetting that part

This was an interview from "news outlet" of the mother of the murderer a DAY after the murder.

Look at the licence plates! Mom's is GVF 1122 and Son's is GVF 1111!? The Challenger had that plate before Fields allegedly bought it as a used car, so how in hell does he manage to get one with almost the same number as the "mother"? 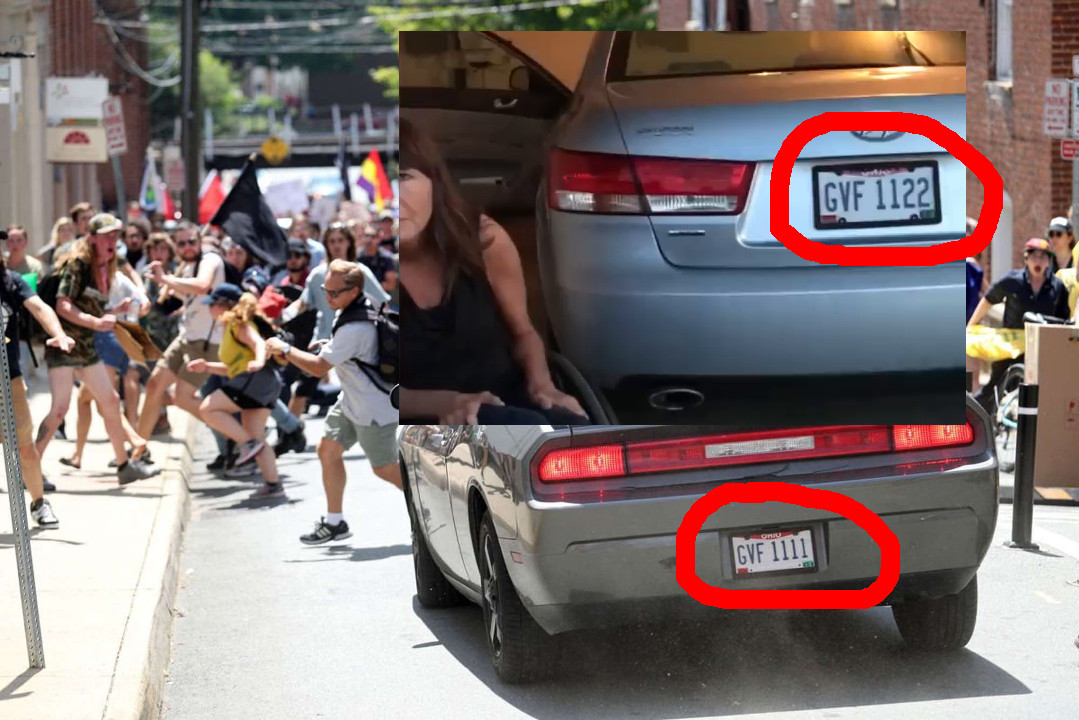 Jason Kessler was an “Occupy” movement and Obama supporter prior to organising the rally.

I am pretty sure this was a staged event from the start, which was meant to simultaneously attract and repulse real counter-protestors who are opposed to the (artificial) rise of "White supremacism".

This is because I see a lot of evidence that the "Unite the Right" groups are controlled opposition, and I know people in the Charlottesville area who seem to believe they witnessed the media-hyped event.

These people, I think, were meant to be there and to see this event in order to spread the fear of this "conservative" group and try to make them shy away from public spaces while getting reinvested in the media's "heroic" coverage of the alleged (likely staged) violence.

If you couple this with the Vegas event, it seems there is a growing controlled effort to associate and glue the pro-gun demographic to the most offensive and stupid racist bigots, as if to isolate them against a generally "politically correct" opposition and keep the shit stirring in easily controlled groups. Similar to how "Republicans" were apparently run into a corner by efforts of the radio pundits to glue disingenuous Christian pride to anti-immigration, "traditional" (if rather anti-Christian) values and other "hateful" movements.

I don't mean we have to unpack every single demographic here in this thread. I only mean to observe that a useful anarchism and dissatisfaction with political bullshit (the kind of bullshit that specifically protects land claimants) has been successfully corralled back into the two pens of the political paddock run by them. And that would seem to be the main purpose of every violent, jarring, traumatizing American media event in the last hundred years, including the latest "Civil War" shit stirring.
Top

It was advertised and promoted months ahead of time in many different so-called "Alt Right" and Southern heritage websites, beseeching as many people as possible to show up. While I'm sure there were many "confederates" (so to speak

) - in the sense of being secret accomplices - whose job it was to become media focal points in the melee, this was definitely a real rally with many honest uncontrolled participants whose main focus was to protest the removal of the statue of Robert E. Lee.

As for "alt right" being led by controlled opposition, I most definitely agree. Like all other political identity groups, the followers are always corralled into the same paradigm of believing the media stories (alt right believes in Donald Trump and that all Muslim terrorism stories are 100% real).

What's sad is many of those people are at least aware that the Holocaust was a lie and could probably take the next step to realizing the same is true about "muh 9/11" were it not for the gatekeepers in whom they put their trust.
Top

NotRappaport » October 6th, 2017, 9:45 pm wrote:
What's sad is many of those people are at least aware that the Holocaust was a lie and could probably take the next step to realizing the same is true about "muh 9/11" were it not for the gatekeepers in whom they put their trust.