For now, thanks for the hearty laugh, brianv! Btw, nice to see you back - and in good form & spirits at that!

Thanks for replying in clear manner to our members' good questions. After all, didn't you register here for thoughtful support to your own questions?
Top

I agree. Right down to the product placement in every sentence. And the jk9357 "joker" handle doesn't fill me with confidence.
Top

Re: sLaughter in Trumpton

Oh dear. BRADEN MATEJKA is a composite of BATMAN and JKER (ED). We've been Batman and Jokered again.

Oh hello jk9357, what was that again about your friend's friend ? Maybe try "cl0wn" next time!

Not so quick asswipe - who exactly are you? You are in the know! C'mon fess up, are you a fake government clown or scum media clown or both?
Top

Not sure what I expected from posting here; I understand appropriate scrutiny perfectly, but “internal memo” and “media release” just because I speak English and proofread my post?

To answer some of the questions, we can’t visit her in the hospital since I have school and he has work, not to mention I don’t have the funds to fly across the world on a whim. Country music is not remotely popular in Germany, but since the cabin crew has a few days before they fly back they attend local events and tourist attractions. He did not tell me he was planning on attending in advance, but then again he doesn’t usually tell me what he’s going to do on flights. Regarding Craigslist, I was referring to https://phiquyenchinh.org/2017/10/05/cr ... gas-event/ (link ≠ endorsement). The shot colleague’s name is Michelle, I didn’t catch her last name.

I talked to him today (recorded it on my phone), and here is the translated transcript:

Your colleague—she was shot in the lung right?
Yeah, right through the lung

Did you see it happen, did she ever send pictures?
<shakes head>

She just messaged you?
Uh no, a [different] coworker messaged me, that it had happened, and that she’s in the hospital

I don’t know—
And you know, we had planned, Friday wold have been the outbound flight to Vegas, and on Tuesday the return flight, or rather Monday, and we had arranged that we would all go to that festival on Sunday, and you know, I was here with you on Thursday, called in sick, and then she—wait, hold on, I can me check when exactly she contacted me

She messaged you on WhatsApp?
Yeah WhatsApp, hold on <checks phone>

I’m not sure if you’ve been following recent developments—
She messaged me on Monday, October 2 at 6:03 PM, so 9 AM local time, Monday morning, she messaged me

[…] I’m wondering, did the shooting even happen?
But, I mean, they did see it happen

Do you think [your coworkers] could be lying to you?
But, I mean, this colleague specifically did tell me that they saw the corpses, and so on, and that right next to her someone was shot, head shot or whatever, I can’t really imagine that they they could be lying

[…] Do you think it could have been someone else? I mean, someone on the concert grounds, and not in the hotel?
Not really, no, because, because of the fact that he was shooting at the crowd from an elevated position, he had that kind of range, I’ll call it range, of killings

Yeah, but—
And also from the angle of impact

[…] You never really know what happened unless you were there right?
That’s right, but I’m glad I wasn’t there

I believe that
I’m really happy

Before you take issue with any specific words, I translated this and it doesn’t necessarily convey the whole intended meaning (if anyone who speaks German is interested in the recording, let me know). Anyways, in my opinion, it all either sounds very rehearsed (head shot, really, could you be more dramatic?), or as if he is rehashing what he’s seen on the news. I feel like I’m no wiser than I was before, do you guys think he is lying or that his coworkers are lying? Are they all in on it? What NotRappaport said resonated with me, it is really convenient that she was shot in the lung and he won’t ever see her again (I specifically asked him to confirm the fact later and he replied in the affirmative).

I guess what I’ll take away from this is that the shooting probably didn’t happen, and that I should take everything he says with a huge grain of salt from now on, which really is a shame.

Finally, I refreshed the page just now, and after seeing all the hostile posts (I probably wouldn’t have bothered transcribing and writing everything up if I had initially seen them), especially from brianv, this forum really feels like an echo chamber, and anyone adding anything other than “Haha look at the CGI” will be branded a “government clown” and “scum media clown”. Did I say anything about whether it happened or didn’t happen? All I did was retell my experience and the conclusions I drew from it. I get the message loud and clear that I’m unwanted here, so Simon feel free to delete my account.
Top

Why so? If you are genuinely interested in getting to the bottom of your own experience (of having some flight attendant friend who allegedly knew two flight attendants who were supposedly injured in the purported Las Vegas shooting), just stay here and let us know about any future developments of this experience of yours. Ok?


Oh, and by the way: apparently, NO flight attendants were injured at the "LAS VEGAS SHOOTING". Here's from the "APFA" website...

THE ASSOCIATION OF PROFESSIONAL FLIGHT ATTENDANTS

"As we slowly come to terms with the news of what is being reported as the deadliest mass shooting in the U.S., we were greatly relieved to hear that our coworkers on layovers and living in Las Vegas were not harmed. However, many may find themselves in the wake of traumatic emotions resulting from yet another senseless shooting."
https://www.apfa.org/hotlines-2017/5019 ... agedy-loss
Top

As I was saying about a certain post resembling a "memo or press release", well... 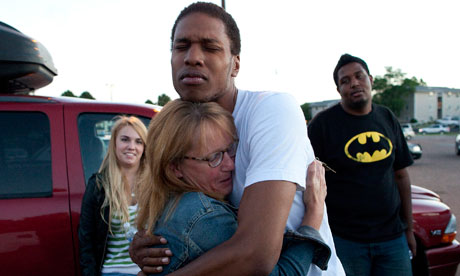 She just messaged you?
Uh no, a [different] coworker messaged me, that it had happened, and that she’s in the hospital
....

What NotRappaport said resonated with me, it is really convenient that she was shot in the lung and he won’t ever see her again (I specifically asked him to confirm the fact later and he replied in the affirmative).

If she is supposed to have relayed the info about not returning to work, ever, the day after it happened, you can be 100% assured that either your friend is hoaxing you, or his co-workers are hoaxing him, or she is hoaxing the co-workers.

Re: BATMAN and JOKER

You left out the real boyfriend from WDBJ shooting Daniel Wulz.. Several batman photos on his facebook, before he changed names and went private.

Then you had Adam Ward

I remember there were a few more that I can't recall off the top of my head.
Top

Some questions for our new member :

Colleagues and Coworkers.
Is that how people refer to each other at work in your experience? No, it's not. They are media expressions, or abstractions, as the press release confirms. In my experience it would be, "One of the lads", "My mate at work", "John", "My fucking Foreman", "One of the girls from the other shift", etc. If I was relaying information and didn't want to give a name I might say, "One of the men I work with was shot." You see it implies that I know this man for a start. He's not a media abstraction.

"Your colleague—she was shot in the lung right?" Another abstraction. An abstraction cannot be shot. Only physical men and women can be shot (in this context).

Your (abstract) coworker was shot through the lung, What was he carrying it in his handbag? Your lungs reside inside your chest, to have a bullet pass through your lungs it must first shatter your ribs to enter and if a high velocity round, it would leave a 10" hole in your back. If you were to survive such a wound, it wold mean a six month hospital stay with your entire body black and blue. Any such wounds reported?
Top

It’s just hilarious how the media manages to get away with the utter silliness of such things like that.

Holes in the head, lungs, etc.

I’ve almost lost count of how many holes are in this ridiculous “news” story.

Perhaps a new Topic entitled “Lung Piercing in a Vacuum” is in order.

That post was gold Brianv. Thanks for the laugh.

As for our new forum JOKER, I hope to not read anything from IT again. TRASH.
Top

The shot colleague’s name is Michelle...

Well at least they got the spelling right this time, they are reading cluesforum. Anybody remember the Micheles? Search Box->Michele

We had Michele Rae "member", who disappeared rather fast and her spawn Michele Nichols
" Here is Donna with Christina Kminek, whose sister Mari-Rae Sopper was killed on Flight 77, and Michele Little," Jesse Ventura

The place is awash with Micheles and Michelles.
Top

brianv wrote: The place is awash with Micheles and Michelles.

Perhaps it's got something to do with those similar noses?

From the Urban Dictionary: