Anything on the news and elsewhere in the media with evidence of digital manipulation, bogus story-lines and propaganda
Post Reply
First unread post • 72 posts

I've often thought the 9/11 movie would have used scale miniatures for some of the scenes... that certainly would explain why you have 'steel beams' weighing "hundreds of tonnes" being flung around laterally.

They're not steel beams... probably just a bit of tin or something.

A photo from one of my favorite sites... 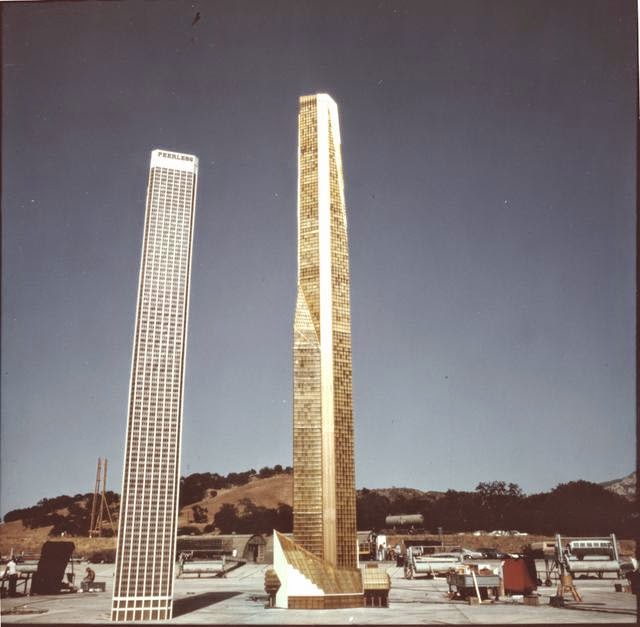 A 'miniature' used for the 1974 movie THE TOWERING INFERNO
Top

Critical Mass wrote:I've often thought the 9/11 movie would have used scale miniatures for some of the scenes...

I also think "large miniatures" may have been used for the 9/11 movie, even if they were only one of the ingredients in the final mix. It seems like an obvious way of obtaining somewhat realistic effects of fire, explosions and collapses, and "magicians of the miniature" were not hard to come by in the late nineties.
I get the same feeling with some of the rocket launches, especially where flames and billowing smoke are lifelike enough but in completely wrong proportion to the enormous size of the object represented.
Example: https://www.youtube.com/watch?feature=p ... W-zIkH6MeI
Top

There is a rather curious story that the Olympic got into an accident in September 1911, and therefore it is "speculated" the Titanic narrowly avoided disaster on that day. That month will always be 100 years behind the events of 9/11.

Topical episode of The Clues Chronicle out soon ...

There are plenty of news today about a journalist investigation for Titanic Case.
The conclusion is that there was a fire before the journey.
http://www.foxnews.com/science/2017/01/ ... -fire.html
Top

This is assuming the journey took place.
Top

the narrative says general sarnoff heroically manned the telegraph machine the night that dastardly iceberg wreaked so much havoc. his actions brought radio (and himself of course) into the spotlight we're told...

"Radio to the Rescue: David Sarnoff and the Titanic Disaster

From April 12 through May 11, 2012, a special exhibition of artifacts from The Sarnoff Collection was presented in the TCNJ Library to commemorate the 100th anniversary of the sinking of the Titanic, an event in which David Sarnoff played a significant role. Below are texts and images from that exhibition.
In 1912, Sarnoff was assigned to manage the Marconi wireless station at the Wanamaker department store in New York City, which led to his participation in a pivotal moment in the history of communication. On the evening of April 14th, 1912, the ocean liner Titanic struck an iceberg and started taking on water. Almost immediately, the ship began transmitting distress signals. Soon the airwaves were flooded with news of the disaster as operators tracked the rescue effort. Sarnoff played an important role throughout the crisis  After three days at his Wanamaker’s post, he traveled to Marconi’s Sea Gate station on Coney Island. While there, he contacted the steamship Carpathia, which had picked up survivors from the Titanic and was returning to New York. Sarnoff proceeded to compile the names of these passengers and forward the good news to their families.
The sinking of the Titanic brought radio into the public spotlight and prompted Congress to regulate the medium for the first time. Sarnoff would refer to the incident as an important turning point in his career. “The Titanic disaster brought radio to the front,” he later recalled, “and incidentally me.”"
https://davidsarnoff.tcnj.edu/2013/08/3 ... -disaster/

...that was from the sarnoff collection. the 'jewish current' site tells a similar tale; but there are some interesting comments in the comment section below their bullshit story...

A picture of sister ships Olympic (left) and Titanic together during construction at Harland & Wolff in Belfast. An image purporting to be in fact. Looks kinda cobbled together, which made me look at it further. Would they be afloat during construction? Not in dry dock?

brianv, nice image of the Titanic and the Olympic. Been looking for all three sister ships in one image. Super hard to find. There were 3 ships said to have been built: the Titanic, the Olympic and the Britanic.
Top

If we take out the iceberg part, and instead say the ship got torn apart by the forces of the sea on its maiden voyage(like big waves in stormy weather), the story would be 10 times more believable.
Top

Titanic - I`m the king of the world! - Full scene HD

K, Leo, if you say so. That'll stay your little secret.
Top

ICfreely, looks like its going to be hard to hire submarine and check out the alleged wreck ....

Titanic shipwreck to be protected under treaty between US and UK

“This momentous agreement with the United States to preserve the wreck means it will be treated with the sensitivity and respect owed to the final resting place of more than 1,500 lives,” said British Maritime Minister Nusrat Ghani in a statement announcing the news on Tuesday.

“The UK will now work closely with other North Atlantic States to bring even more protection to the wreck of the Titanic.”

However, it appears that they won't have to protect for much longer because according to the narrative....

Henrietta Mann, a researcher who co-discovered a new species of bacteria lurking in the “rusticles” growing off the wreckage, told the Brisbane Times that the ship may have just 30 years left before it vanishes for good.

However, at least we will have the usual shoe/boot image for posterity...