ADMIN NOTICE: The dicussion about the COSTA CONCORDIA incident (Friday,13 January 2012) started out in the LIVING ROOM section of our forum ("Age of fakery Art Corner" thread. I have moved all the related posts into this dedicated thread. Coincidentally, our member Heiwa had - two days earlier (January 11, 2012) - been reminding us of the Estonia Incident of 1994. -simon The above picture (from a fake video) is an example how to fool the public with images. In 1994 a ferry sank in the Baltic and 850+ people drowned. The authorities immediately said the bow visor (a movable part of the forward superstructure of the ferry) had been ripped off (nobody heard anything) by very big waves and caused the sinking. It was badly designed! When normal people said it sounded a bit fantastic and unrealistic

, the authorities presented two WITNESSES!! They had not only seen that the visor had disappeared, they had climbed down on the fwd door, etc, bla, bla!

, and later jumped into the water and saved themselves. At the same time 300 people were waiting on top of the side of the ferry and the 3rd officer Tammes was sending a Mayday from the bridge stating the heel was 20°!
Full story at http://heiwaco.tripod.com/news.htm

After what happened on Friday evening, the above posting was very prophetic.
Top

After what happened on Friday evening, the above posting was very prophetic.

I too am obviously looking at the Concordia accident wondering if we should have a thread about it... 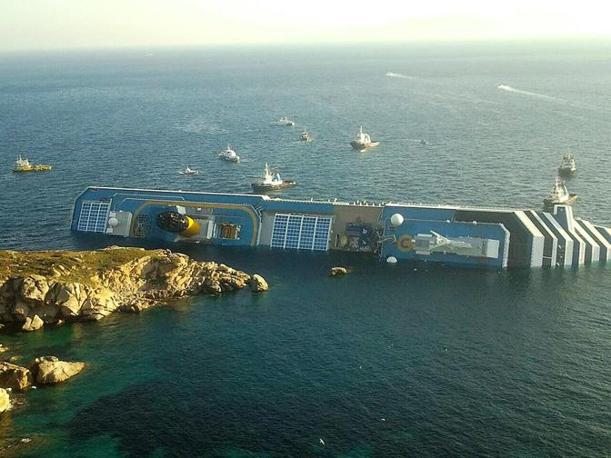 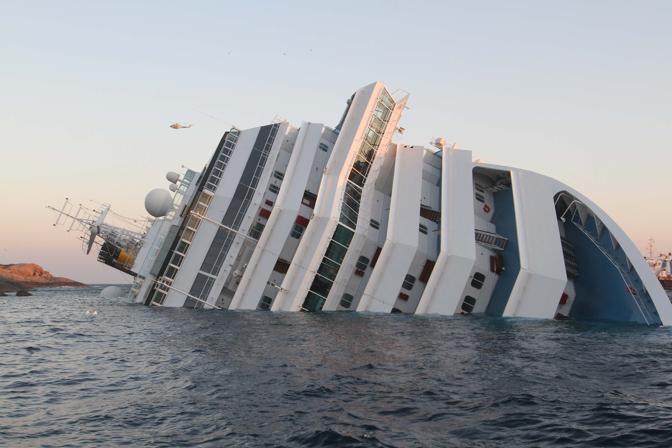 At present it seems impossible to think that this accident was faked, because the shipwreck supposedly is visible a few yards from the coast and from the harbor town on Giglio Island. However the accident is weird to say the least, and the fact that the ship was named "concordia" (harmony, concord) doesn't make me any more enthused to accept the official story about this "titanic-like" accident...
Top

1st Video - This is a still image to which they have added panning and shake to make look like footage!

2nd Has advertising which I immediately killed!

Reminds me too of the dubious Concorde incident! http://en.wikipedia.org/wiki/Air_France_Flight_4590
Top Weird...When was this image taken?

More images of the COSTA CONCORDIA incident - with media sources: 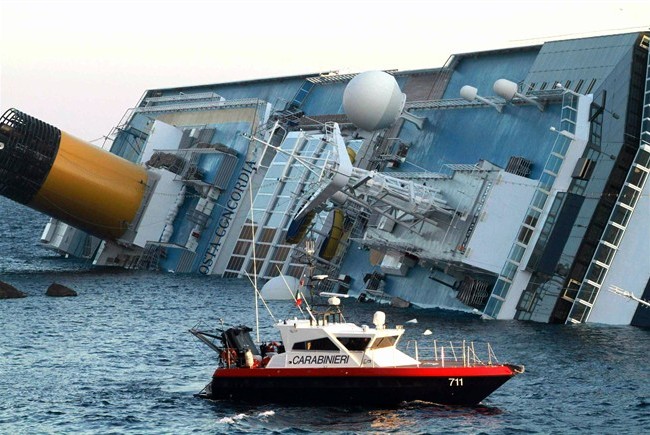 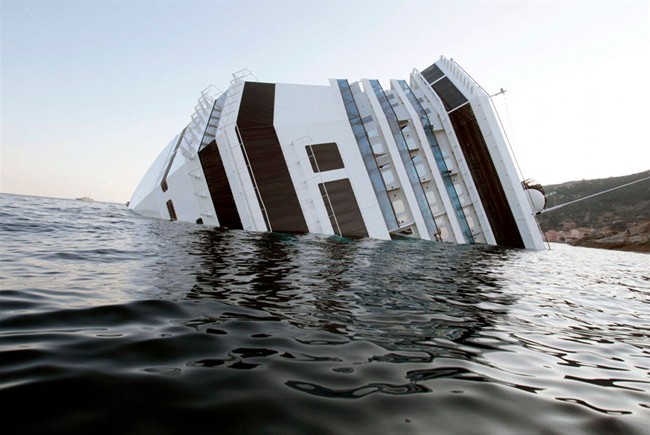 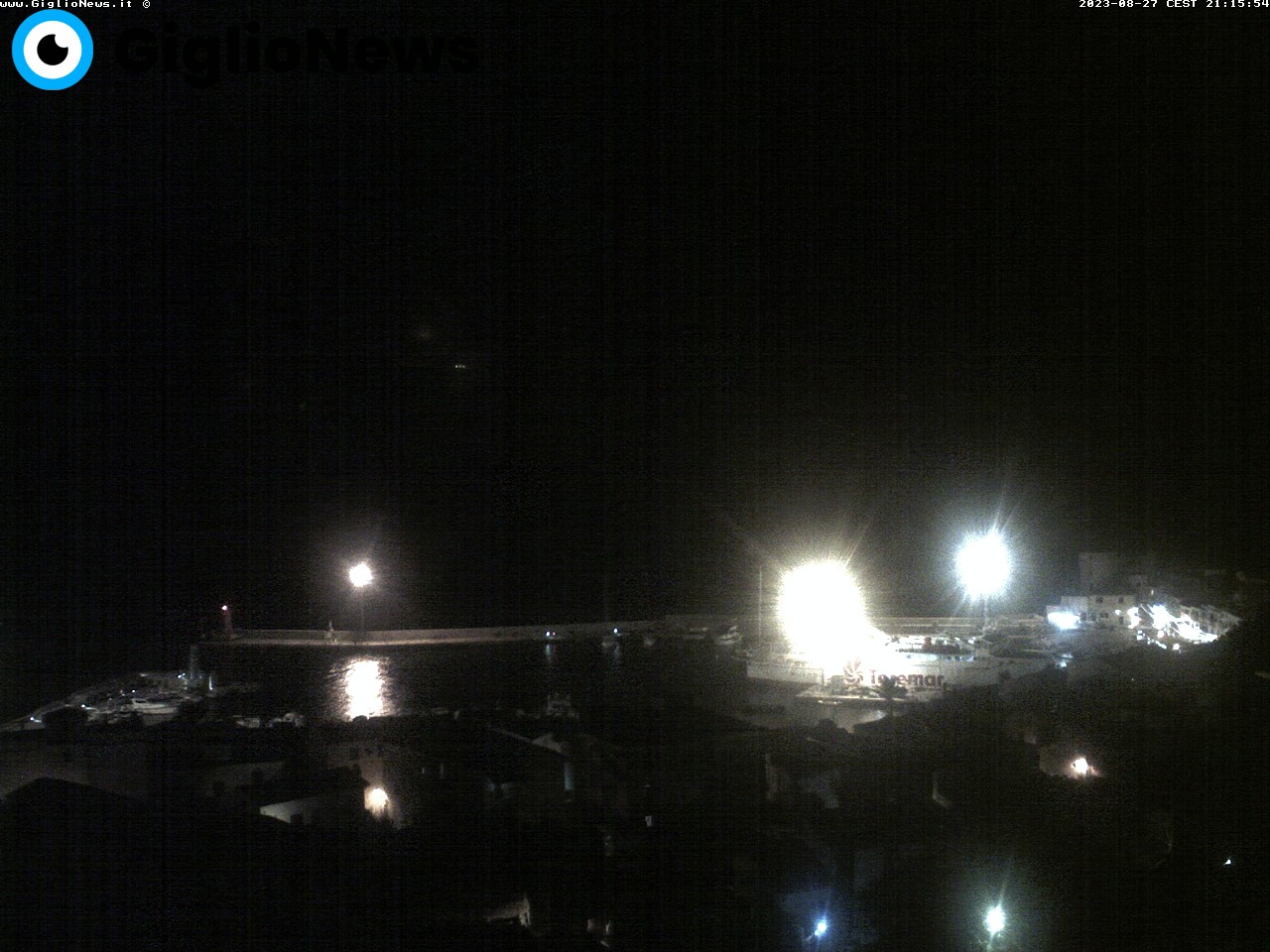 There is a big structural damage in the hull below waterline on the port (left) side aft as seen as follows on early footage (with no big stone or rock in the hole!):

Later footage has a big stone or rock in the hole! Question: Is the stone/rock photoshopped into the hole?
Top

Reading about this, and looking at this image...

...all I was thinking about was this.

Captain of capsized cruise liner held on suspicion of manslaughter as three die and 40 are missing... but two found in stricken vessel

- Passengers tell of 'chaos' as crew members said 'go back to your cabins'
- Survivors leapt for their lives into the icy sea as the liner rolled onto its side
- Captain of the ship in custody with another crew member
- Boat was 'four miles off course' when it hit rocks
- Bodies of two French passengers and a Peruvian crewman recovered
- One victim, 65, died from heart attack following shock of cold water
- Liner had listed so badly 'lifeboats had difficulty being launched'
- 37 Britons on board but none believed to have died or been injured

To be fair it seems the evacuation went well, i.e. all lifeboats were launched with 99% of all persons aboard and said lifeboats managed to reach the port just a few hundred meters away. Success. Luckily the ship carried just 80% of the persons she was certified to carry, so there was room for all in lifeboats.
Mystery to me is the big underwater only damage port aft with a big stone pushed into it. Did the ship make a tight starboard turn and damaged the swinging out port aft part in the process? The port stabilizer fin a little forward is still intact and sticking out (you wonder why as weather was good - why use stabilizers?) and you wonder what caused the aft, port damage.

I thought first that the ship was rammed port aft by a submarine and started to sink and that the captain decided to beach the vessel on nearest island and that early footage of the damage showed no stone pushed in.

Anyway, todays ships are fitted with Voyage and Voice Data Recorders so it should be easy to find out what really happened unless ....

Heiwa how did you do that? It's almost like you had foreknowledge of this incident?

Please tell me Irish Lotto numbers for next week?

"The Costa Concordia, the new flagship of the Costa Crociere fleet, is set to become Italy's largest cruise ship. The ship - whose name, the owners say, expresses the wish for continuing harmony, unity and peace between European nations - will depart from Civitavecchia on its maiden cruise on July 14 after the final stages of work are completed."

As Nonho has pointed out, the owners (Carnival Corp. An American Giant Corp.) named the ship with a wish in mind for the continuing harmony,unity and peace between European nations. How Sweet. That was 2006 and all seemed sweet and dandy at the time in Europe.

Then, just as the present engineered financial crash was taking off this little ship too had a crash on the 22 Nov 2008 into a dockside (we are told).

On 22 November 2008, the Costa Concordia suffered damage to her bow when high winds over the Sicilian city of Palermo pushed the ship alongside its dock. There were no injuries and repairs started soon after."

Now in 2012, As Europe slides ever downwards and seems to be about to Capsize, this little ship foreshadows these events.

The Captain 52(7) seemingly had 11 years experience.
Everything about this incident doesn't seem right.
Top

On Friday 13rd of January, the Concordia ship sank near the harbour of Giglio island, Tuscany, Italy.

On tNe Net there are many forum related about this event:

All they are in italian language, but you can google translate them.

The passengers leapt into the icy sea off the coast of Italy? I haven't really got into this one yet, Med or Adriatic?

Wouldnt' it be closer to the mark to say that Concordia means "Agreement" or "In Agreement"? A sunken agreement!

I couldn't help saying "religious iconography" to myself!

Oi Terence, I'm thinking the Irish Lotto is a scam! The supposed and unpublished "milions winners" goes back to the banksters? Rollover, play dead!
Top

Terence.drew wrote:Heiwa how did you do that? It's almost like you had foreknowledge of this incident?

Please tell me Irish Lotto numbers for next week?

Accidents happen at sea every day ... and in most cases away from shore and curious onlookers. Re Irish Lotto Paddy, my horse breeding friend outside Dublin has unfortunately informed me the wrong Grand National winner the past 10 years. The incident is easy to explain. It is the fault of the island!

1. The island was in way of the cruise ship, when Master was entertaining passengers as expected.

2. Island was detected in the dark night and a hard starboard turn was made. Port aft end touched the rocks! Vessel started to leak.

3. Master stopped entertaining passengers and decided to beach the vessel. A 180° starboard turn was made.

Had the (2) hard starboard turn been done 60 seconds earlier, nothing would have happened and the $500 million ship would have continued to Savona and no passenger had known anything. I have a feeling this was a real, stupid event and no psy-op!
Top
Post Reply
444 posts