Anything on the news and elsewhere in the media with evidence of digital manipulation, bogus story-lines and propaganda
Post Reply
First unread post • 104 posts

Plane crashes into Taipei river with 53 passengers aboard [58 total]

Mods - I didn't want to create a new thread since this story is so fresh and not a lot of details have emerged yet, but if you feel it warrants a thread of its own, please feel free to move it. I saved a handful of images (above) from Google image search.

Some news sources are claiming "up to 11 killed"
http://www.arabnews.com/world/news/699416

Some questions to consider:

Does the "airplane" in the video and subsequent video still (first image above) look like the same airplane in the water?

Do the victims look wet or dry?

Is the water level consistent throughout the photos?

Is the ambulance number '91' just a mere coincidence?

Is it just by pure chance that the airplane's final resting point should be right in the middle of the canal, equal in distance to the land on both sides? Or does it look like it was placed there?

Is there any evidence in the surrounding vegetation of a plane crashing into the water (ie, disturbed shrubs, gashes in the earth, etc) ?

Does the last photo depict a real scene with real people or is it more reminiscent of the 9/11 Playstation quality imagery? What is the man in the water holding onto with his right hand? Is that supposed to be a severed arm?

Does the plane crash look realistic given the shallow depth of water depicted by people standing approximately waist high?
You do not have the required permissions to view the files attached to this post.
Top

STAYING AHEAD OF THE RAMPANT VIDEO FAKERY

The recent "TAIPEI river plane crash" may not be such a big deal in the Grand Scheme of media fakery (and faked airplane disasters) - but I chose to spend a little time on it, were it only as an exercise in detecting fraudulent videos diffused by the worldwide media. To be sure, CGI technology is getting better / more sophisticated / & realistic-looking every day - and we have often, on this forum, been musing about (and dreading) the day when video fakery becomes so advanced as to be totally undetectable. Thankfully, as it turns out, this doesn't seem to be the case yet - in 2015.

If you have been looking into this TAIPEI planecrash a little, you will know that the crash 'just happened' to be caught on video by TWO private "camera cars" closely following each other - the two of them trailing behind a yellow TAXI whose windscreen was reportedly smashed by the crashing plane... Right from the get go, you may say, "this story stinks of rotten sushi!" - but let us not be blinded by 'instinctive disbelief' in such extraordinary coincidental happenstances. For the sake of upholding serious / proper research deontology, we just cannot brush away such unlikely occurences as 'unbelievable' or 'impossible'. So what I will do here, is to verify whether the two available 'amateur videos' of this reported TAIPEI planecrash are consistent with each other. When I say 'consistent', I of course imply the following notion :

"Are the two videos (allegedly captured from different cameras) both consistently depicting an event that could actually / possibly have played out / occurred in the real world?"

As you will see, my answer to this question is: No.

Now, it is essential that you understand the reason WHY I have selected, for comparison, the two below video frames (extracted from the two "camera car" videos) in order to make my case, namely: the two frames represent pretty much exactly the SAME MOMENT IN TIME.

The gaps between the upper-left building and the airplane wingtip (marked as <---X--->) are practically identical in both frames. This is, of course, impossible - in a real world situation - due to basic laws of perspective. That X-gap should logically be far wider in "VIEW FROM CAMERA CAR 1" - since Camera Car 1 is travelling some 60m (or so) ahead of Camera Car 2.

Whoever fabricated these two CGI videos ran into a classic, tricky old difficulty encountered in "3-D" video compositing : to retain 'real-world consistency' (i.e. REALISM) between moving objects within any given pair of re-targeted sceneries - and their relative spatial perspectives.


(Of course, the very different skies / cloud-covers in the two videos is another bizarre inconsistency - and can hardly be ascribed to "different lens apertures" or such like...).

video sources:
(High-Definition "CAMERA 2") http://we.tl/tWD8nvFcyF
(medium definition "CAMERA 1"): https://www.youtube.com/watch?v=qMDl84RypA8
You do not have the required permissions to view the files attached to this post.
Top

Let us also salute this researcher's video frame analysis who very accurately manages to point out the typical "overlayed" CGI animated frames and collisions between the animated objects in this sequence. Well done Mr. shroomingnewman.

Looks very fake to me as well.

However, I neither find Simon's assessment nor the shroomingnewman video too convincing. Simon, it's correct that the distance of the plane from the building would have to differ, but only if both frames display exactly the same moment in time. I'm not at all convinced that this is the case just by looking at cars and lamp posts. The plane is moving much faster than the cars, so every tiny fraction of a second will make a difference.

The shroomingnewman arguments are flawed, as many commenters point out on YT, because the plane color just merges with the lamp post color, but the plane is always clearly behind.

The question is: If those videos are actually fake (which we assume), are they completely CGI or is the plane some kind of overlay or composite with a real car video? If they are completely CGI, there should be no perspective errors whatsoever.
Top

Who made the taxi look like it was hit? have you seen pictures of it?
Top

*
The first thing that struck me about this nonsense, without even noting the screwy perspectives or "transparent" light poles, was why any "living" pilot would not be trying to straighten the bloody wings & level out — the ailerons, elevator & rudder weren't supposed to be damaged, only one engine?

Here are some of the original "dash-cam videos" (do they always have sound recording on?

According to this one:

Published on Feb 4, 2015
“Dramatic footage shot by an employee of Taiwanese television station TVBS shows the moment a passenger plane clipped a roadway before crashing in Taipei.”

rusty wrote: The plane is moving much faster than the cars, so every tiny fraction of a second will make a difference.

Exactly, Rusty. That is exactly the point. We can therefore conclude that, since there is virtually no observable width difference (between the two <---X----> sections shown in my two "CAMERA CAR VIEWS" - as of my above post), one of the two video clips must be fake. Whether the other one is fake too - is simply up to your inborn sense of logic. Honestly speaking, would it make any sense that one of them is legit - while the other is fake?
Top

rusty wrote:The question is: If those videos are actually fake (which we assume), are they completely CGI or is the plane some kind of overlay or composite with a real car video? If they are completely CGI, there should be no perspective errors whatsoever.

Well, that's just an assumption on your part. Since we don't know the method of construction, we don't know what errors are possible.

If we see errors, though, it doesn't matter too much how it's made or why the errors are there. The goal is to just achieve an understanding about if the media is trustworthy.

Go back and look at some of the ridiculous perspective problems in the 9/11 imagery! Clearly, they have some bizarre concepts of what constitutes acceptable or unacceptable errors.

They seem to use (depending on the story or dumb stunt necessary for their attention-getting objectives) some combination of layering, compositing, 3D software "Objects", objects in pseudo-3D space, rotoscoping and/or augmented reality.

Anyway, would a wing just cut through the street like that, without causing any friction or problem for the plane path, whatsoever? The plane's path — wing completely "intact" — does not appear in any way altered, the wing not damaged nor bent nor broken. Perhaps the concrete is portrayed as "soft" enough but I doubt it's a realistic depiction. It seems like goofy 9/11 toon physics again. I would expect the plane's tail to point a bit more upwards as the wing hits the street, even if a little. Instead, the plane acts like an unstoppable invincible super force super-fused together and passing through the highway unimpeded. I guess they want us to mentally "split the difference" between the gravity-momentum vector and any altered course we should be noticing the moment the tip of the wing hits the pavement, since the curve in the road ensures that the "plane" quickly exits the screen after this.
Top

Brutal Metal wrote:Who made the taxi look like it was hit? have you seen pictures of it?

Brutal, this shows a zoom/replay of the taxi supposedly clipped by the plane wing — why didn't it spin?

And, from the Daily Mail: “'I fainted the moment it hit us': Driver of taxi hit by plane as it fell from the sky and plunged into a river in Taiwan tells of his lucky escape... as locals pose for SELFIES near the wreckage” hoi.polloi wrote:Instead, the plane acts like an unstoppable invincible super force super-fused together and passing through the highway unimpeded.

Hoi, don't you remember? Airplanes even slice effortlessly through steel / concrete - and anything that gets in their way!

Just watch how the aft stabilizer "vaporizes" that poor lamp post in a split second ... Poof!

TaipeiPlaneCrash.gif
You do not have the required permissions to view the files attached to this post.
Top

Wouldn´t the stabilizer have severely damaged the left side of the taxi? 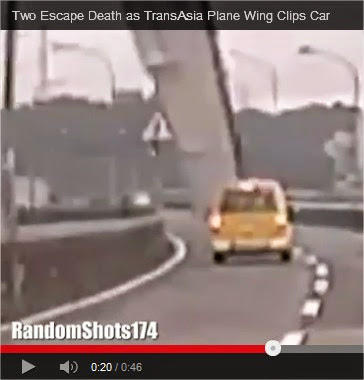 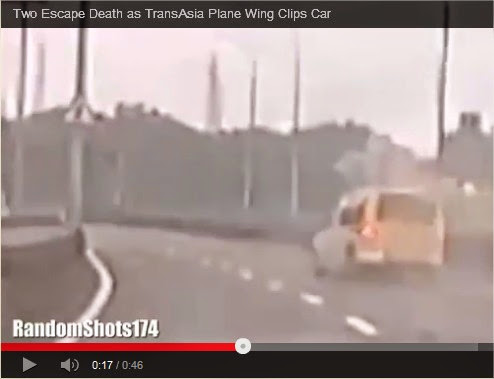 Instead, the car has furrow in the hood at perhaps 60 degrees, suggesting a nearly frontal impact. 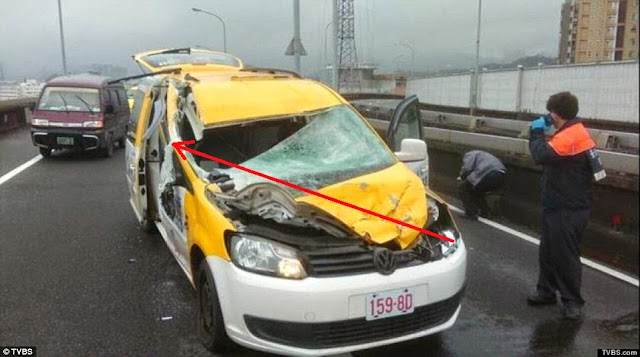 Also, you must admire the driver: he stepped on the brakes even before being hit, and continued braking and maneuvering despite having "fainted the moment he was hit".
Top

Flabbergasted wrote:Wouldn´t the stabilizer have severely damaged the left side of the taxi?

Dear FG, if you look at the ATR aircraft design, you'll see that its aft stabilizers are placed considerably higher than the main wings, so no - one wouldn't expect the stabilizers to have struck the taxi.

IMHO rationale behind this kind of psyops is strictly pecuniar. To be more precise- Youtube hits and advertisement $$$. I bet this "live crash" attracted millions of views.

Have you heard about "spider dog" ?

This guy supposedly made hundreds of thousand of dollars out of it.
Top

simonshack wrote:Dear FG, if you look at the ATR aircraft design, you'll see that its aft stabilizers are placed considerably higher than the main wings, so no - one wouldn't expect the stabilizers to have struck the taxi.

I am sorry ... I wrote "stabilizer" but I meant to say wingtip (which is seen at the level of the door handle).
Top
Post Reply
104 posts