2000 to 2001 saw the largest moves to concentrate media ownership in history. Would they not celebrate such a merger, even if it was not outright planned beforehand? Nuff said, I think.
Top

I wasn't sure were to put this, your post seemed appropriate

These are four BBC documentaries on Edward Berneys. They do mainly deal with advertising, it is the BBC, but we can imagine the rest. As well as having great footage, they show us where an awful lot of 'our lot' began.

hoi.polloi wrote: 2000 to 2001 saw the largest moves to concentrate media ownership in history. Would they not celebrate such a merger, even if it was not outright planned beforehand? Nuff said, I think.

It's funny. Many people will agree that this media monopoly exists and that the media is untrustworthy and that it is a propaganda source but they still find it unbelievable that the media fakes stories.

On another monopolistic note, here is something that many people are probably unaware of regarding the Hollywood studios though it is something well known to those who work in the "biz":
The major studios freely share their resources with one another. There is no perceivable element of competitiveness as one would normally see in other industries. In most industries one would assume that major competing corporations would never be so helpful to their competitors. That is, Coke doesn't let Pepsi use their bottling plants and Ford cars aren't built at GM's factories, etc. But, in Hollywood it is quite common to be working on, say, a Disney film at the Universal lot or on a Paramount production using Warner Bros. equipment or on an NBC sitcom shot at a CBS lot. It happens every day really and no one thinks a thing about it. It's as if there are no separate studios -- they are all working together. Tourists at the famous Universal Studios Tour might see the infamous "Bates House" from Hitchcock's movie "Psycho" (a Paramount picture) or watch the filming of a DreamWorks movie there. This sort of sharing amongst the studios is very common and visible.

And, in fact a Warner Bros. employee once told me that that IS the way it is -- the majors do, in effect, together comprise one organization, he said, and that there is a hierarchy to this organization and that Warners is at the top of it. I can't substantiate that detail but it is an easily observable fact that the studios do seem to behave in a very non-competitive way in how they share their resources. They seem, in effect, to be all one corporation in their day to day operations. You also see this often in the credits of Hollywood productions -- giving thanks to some other studio for the use of some person or product from the other studio. We've become accustomed to this sort of Hollywood nod to competitors but it's actually a pretty strange thing in the world of business to do that.
Top

full link: http://www.youtube.com/watch?v=HLTsdC0lasc
In this vid Roseanne Barr mentions MKULTRA and how control is exercised over people in Hollywood.
Top

Is TV a military WMD (Weapon of Mass Distraction)?

Nowadays I often hear people saying that the Internet was a military invention. Uh well, what about television then?

I've also read many articles / essays denouncing the "gradual, stealthy and covert" infiltration of the military & the See Eye A into the mainstream media. Personally, I'm beginning to wonder if the various media moguls are nothing but (particularly well-paid) high-rank military generals in civilian disguise... If you think about it, what difference is there between a Murdoch, a Schwarzkopf, a Rumpsfeld, a Powell, a Dayan or a Goebbels?

7:45 > "Now let us see what possibilities exist for television... once the war ends."
Top

This doesn't include the rumored funding of Alex Jones by Stratfor or the Jesuits or whoever the hell ends up getting the hamball actor some hundreds of thousands of dollars for nothing. It doesn't include the paid trolls and shills like Ace Baker or Jeff Hill or other agents and Nutwork pawns who somehow pump out specifically crafted garbage targeting intellectuals.

But it does give an explanation for the so-called "left"/"alternative" media as Americans perceive it, and shows just exactly how certain topics might be deftly avoided on all such "daring" networks that aren't actually that daring at all.

"Leftist media ownership" ... which I'd barely title "gatekeepers" as much as corporate cronies and sell-out chuckleheads pretending to steer the ship of public opinion while the course has already been determined, and all they are really doing is complaining about the cocktails and describing the scenery.

left_gatekeepers.gif
You do not have the required permissions to view the files attached to this post.
Top

I have seen the above chart (the green one) before and it is a nice one. Phil Donahue shows up on that. He is touted with being one of the "sole anti-war voices" on his last program. That show was un-watchable with people talking over one another it was hard to hear what was being said, at all, and I wonder if that wasn't built into it. I forget what the topic was, but Donahue was once approached about why he was not vocal about this or that and he said: "I don't want to be a dead hero." He was speaking figuratively, of course, and meant that if he pushed the envelope to hard he would lose his bully pulpit. He has been retired a long time and he keeps pretty much silent. One of the interesting things about the talk show genre is that it supplanted dialogue, or dialectic if you will, with controversy: "Should our 12 year old daughters be having sex with Iranian Jihadists????? Next, on Jerry Springer." While the example is a little hyperbolic, well, you get the idea: in these kinds of phony "controversies" whatever side you take is the wrong one as the whole intent is to diffuse your energy.

Another nice example, from the chart, is The Nation. Katrina vanden Heuvel, editor & publisher of The Nation was practically born in the State Department. I don't know what her family origins are but the fact that she has an aristocratic name, I find intriguing. After the development of the railroads and the waning of the fur trade in the U.S. the Dutch Knickerbockers sort of lost their sheen and were either subsumed into the new banker/money class or kept on as retainers and functionaries, much like Anderson Cooper.
Top

Which Ford is that on the 2nd level, hoi? Gerald? Henry? John?
Top

lux wrote:Which Ford is that on the 2nd level, hoi? Gerald? Henry? John?

I think it is the Ford Foundation.

Yep. The Ford Foundation is a New York headquartered, globally oriented private foundation with the mission of advancing human welfare. Created in 1936 by Edsel Ford and Henry Ford, it was originally funded by a US$25,000 gift from Edsel Ford. By 1947, after the death of the two founders, the foundation owned 90 percent of the non-voting shares of the Ford Motor Company. (The Ford family retained the voting shares.) (Source: Wiki)

Another one for the records. This one by a concerned father. I like the citation at the end, which reveals how simplistic his research really is. But the point is that if someone as ignorant as "Frugal Dad" can find all this in a quick time, even if they are still duped by politically-owned so-called "Public" media, surely people are really out of the loop if they still insist we have any semblance of a fair world perspective from TV, Hollywood, the military and the News — which are roughly all the same entities.

media-infographic-6-Companies.jpg
You do not have the required permissions to view the files attached to this post.
Top

The Radio Corporation of America

The United States government took control of radio during World War One. This eventually led to the creation of RCA.

"The following cooperation among RCA, General Electric, the United Fruit Company, the Westinghouse Electric Corporation, and American Telephone & Telegraph (AT&T) brought about innovations in high-power radio technology, and also the founding of the National Broadcasting Company (NBC) in the US. The Army and the Navy granted RCA the former American Marconi radio terminals that had been confiscated during the War. Admiral Bullard received a seat on the Board of Directors of RCA for his efforts in establishing RCA. The result was federally-created monopolies in radio for GE and the Westinghouse Corporation and in telephone systems for the American Telephone & Telegraph Company."

On the website swiss propaganda research https://swprs.org/the-american-empire-and-its-media/ (I do not endorse the project as I do not have a complete overview of the theses they represent) I found a depiction of the big media network for the year 2017 and thought that it might be of use for a discussion about the status of the media today. 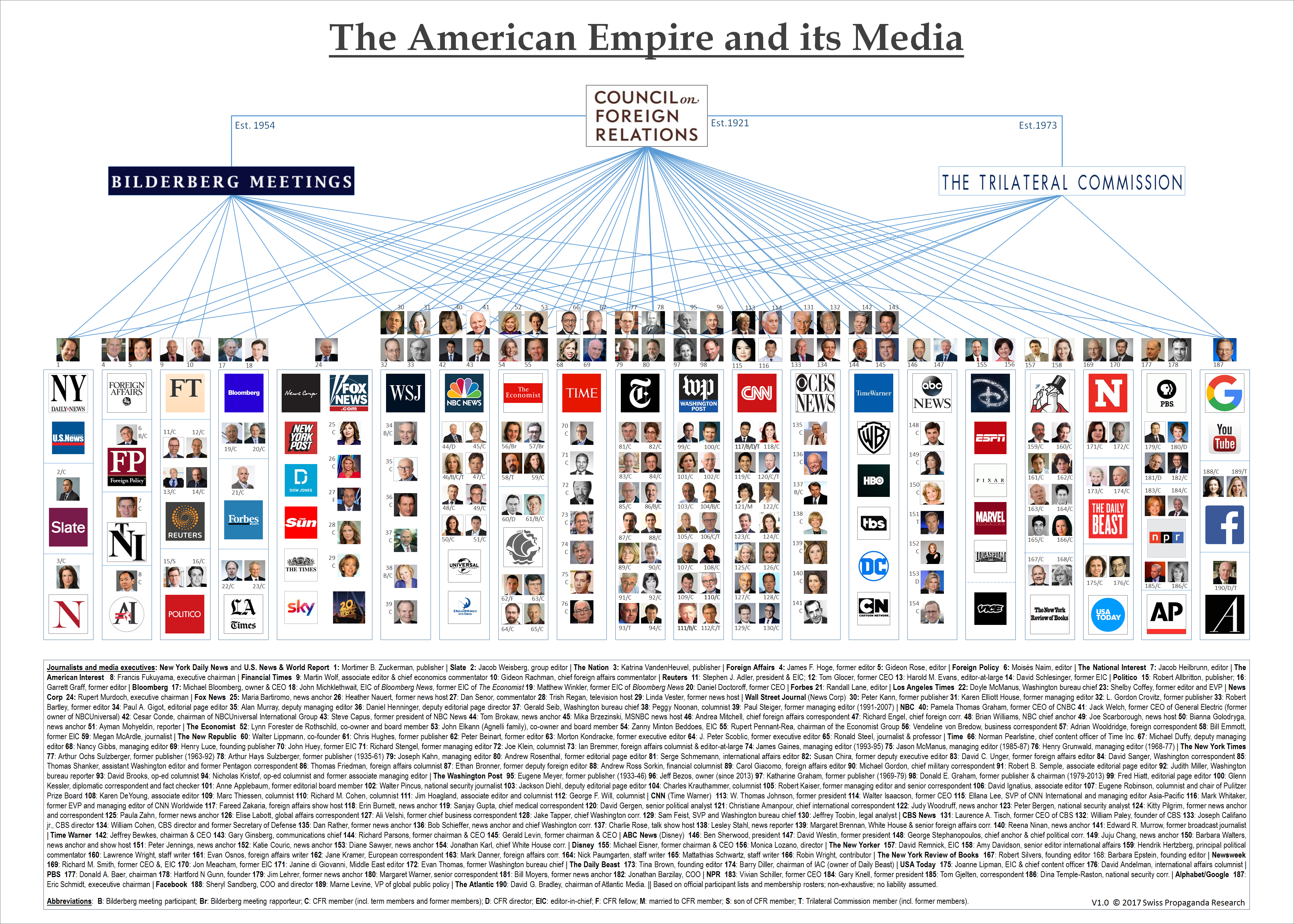