The Lusitania Sinking (1915) brought the US to (the first world) war, the -- British - media created a fake scene presenting the result to the public as the authentic result of that incident

I was reading about the sinking of the Lusitania and bumped across this film.

Was the sinking of the Lusitania another ehem ... y'know ?

A Movie Title Card Screen for the movie: The Sinking of the "Lusitania", The (1918)

Simon, could you see into this issue further?

Made this short footage, concerning the subject.

This is better than the ninelelven footage !
Top

You beat me to it Simon

, only they did not pass it as real, or did they?

Moral: The truth won't come out ever

While this post is not directly connected to fakery, it is some evidence for potential purposeful lying and cover-ups by the US going back to before WWI. Given this evidence I would suggest it is likely that radio news has been faked to some extent at least from that time, and by necessary implication, TV news has been faked from its very earliest days.

Despite an idealistic vision of the country's devotion to the Constitution and its Bill of Rights amendments, it may come as a shock to any American who has not been paying attention that the US government has been conducting illegal unconstitutional surveillance on its citizens for much of the last hundred years.

In what may have been the country's earliest coordinated effort at unconstitutional snooping, a government agency ominously named Black Chamber was in cahoots with Western Union after WWI to retrieve copies of telegrams in violation of the Radio Communications Act of 1912 and the Fourth Amendment.

Once publicly revealed, the operation was shut down only to resurface in 1945 when the Army Signals Security Agency, predecessor to the NSA (National Security Agency) began Operation Shamrock with the interception of millions of international communications from a 'watch list' of Americans.

Assured by government promises of legal immunity, RCA, Western Union and ITT Communications had agreed to provide confidential information to the government's Military Intelligence Division despite a violation of the Communication Act of 1934 and the Fourth Amendment.

Fond this about the Lusitania Sinking:


The Lusitania... The Big Lie That Drew America Into World War I

I was just watching a program which reminded me about a book I have describing how the Germans were correct that the Lusitania was a legitimate target because the British were shipping illegal munitions during the First World War using civilian passengers as a shield.

On the program Treasure Quest on the Green Channel (I did not name the network lol), they dived off the wreck and found proof of a 1950's attempt to destroy the remains of the Lusitania by the British government which Great Britain has always denied because they found unexploded munitions they verified were from the 1950's and British in design.

Now why would the British do this at a time when technology was finally developing to dive the wreck and find the truth?

Here are some undisputed facts.

1) The Lusitania did not fly flags designating it as a civilian ship
2) The name Lusitania was hidden on the ships side and the Treasure Quest team did prove this when they found where the ships name was located.
3) The Lusitania's sister ship, the Mauretania, was stripped down and turned into a military vessel which was made widely know and by concealing the Lusitania's identity, the Germans would have had no knowledge it wasn't the Mauretania
4) The ship manifest included things which made no sense like hundreds of large containers of butter kept in "non refrigerated" where they would quickly ruin.

The Lusitania wasn't the only lie created by the British to pull us into WWI. The British created a telegram which was purposely designed to be intercepted by the United States providing what seemed to be proof of an alliance between Germany and Mexico. The Zimmerman Telegram was from the German foreign minister and addressed to the German ambassador in America, Herr Zimmermann. He was to contact the Mexican government promising them the return of Texas, California and New Mexico with military support and an all out u boat attack on US shipping.

Some believe that the threat of U boat attacks mentioned in the Zimmerman Telegram was part of the idea and when the destruction of the Lusitania failed, they set up other propaganda to prove Germany was trying to wage war on the US to draw the US into the war.

So why remove the flags and name from the Lusitania? Why disguise it to where it could be mistaken for the Mauretania? Why fill it's cargo hold with items clearly that had to be fake because the named items were perishables and had to be refrigerated but were stored in non refrigerated compartments? Why try to destroy the wreck in the 50's when technology finally developed to reach it for study and deny it?

Let's face it folks, Great Britain laid down a systematic platform of deception to trick the United States into the First World War and for all they did... the US government knew what Britain was doing and covered it up. It wasn't enough to draw us into the war... but neither was it something they could reveal because there were many German sympathizers in the US and at the time, millions of Americans were feeling a kinsmanship with Germany being it was a younger nation than the US. Germany has existed for thousands of years as a land of many kingdoms, but only became a nation more recently and after the United States itself became a nation.

Had they revealed that Britain was trying to manipulate us into war... that 1,200 people were sent to their deaths aboard the Lusitania, our sympathies would have lain with Germany against Britain.

Remember, it is a fact that Britain and France feared Germanys rising power and were working against Germany before World War I. Many modern historians even in Britain and France now say that their nations manipulated events leading to war hoping to break Germany and got in over their heads. There is also seeming proof that British leaders felt they could not win the war without the US involved on their side

Many who know this reflect on World War II confusing Germany of World War I with the Nazi's. While the Kaiser wasn't the best of leaders and was extremely arrogant, the powers against him in France, Britain and other European nations were trying to eliminate a new power which became a threat to their own faltering empires.

To the west was America and to the east was Russia... both rising powers we threats but not like Germany because it was right there in their own front yard and there were many conflicts between the Germans, British and French where the Germans now were gaining an upper hand. The end of WWI we all know gave rise to WWII and without the First World War... there never would have been a Hitler or Nazi's... there would likely not have been a Soviet Union because the Czar lost power largely as a result of the First World War depleting his military power.

The sinking of the Lusitania failed to get the US into the war but it succeeded in getting world opinion largely in favor of the Allies and anger about the sinking drew in American support. World history was changed based on lies and deception by Great Britain and while many do not fault Britain... the British Empire died anyway and had Britain lost the Great War because America didn't get involved or it's fortunes changed because maybe America sided with Germany... there would not have been a Second World War or it would certainly have taken a much different direction.

My favorite line from that article...

But even with the introduction of journalistic standards and the somewhat legitimate format of the newsreel, filmmakers still frequently fudged real news events. (After all, don't they sometimes do that today?)

However, THIS paragraph of the same article linked above is mighty interesting:


During World War II, according to author Richard Koszarski, producers regularly had the New York area stand in for Nazi Germany. "When suitable footage of Nazi beer halls was unavailable, a brauhaus in Hoboken served just as well; 'concentration camp graveyards' were constructed on Staten Island; the newsreel's own offices doubled as Nazi Party headquarters."

(Warmest thanks to my Norwegian friend ElBuggo for providing the link to that Bowery Boys article!)
Top

This is my favorite quote


Audiences could be easily fooled in 1906; real events, from moving trains to boxing matches, already seemed fantastic to eyes untrained to cinema

Thanks for the article, quite an interesting read 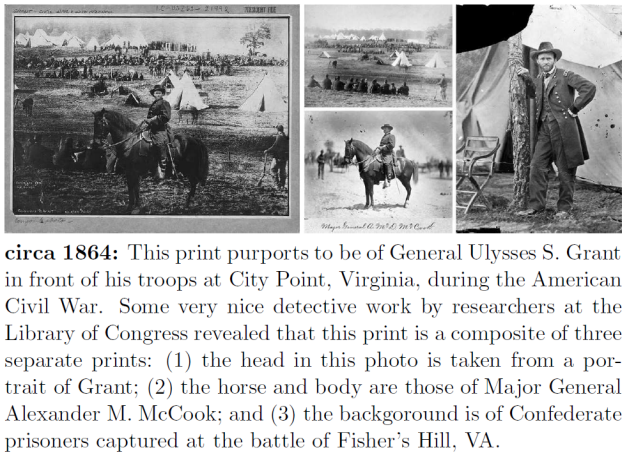 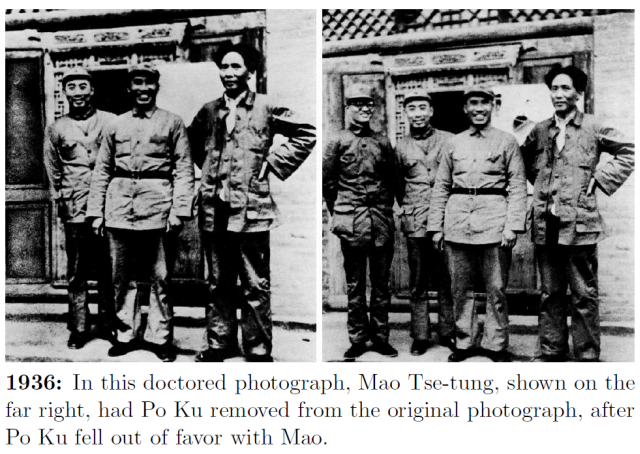 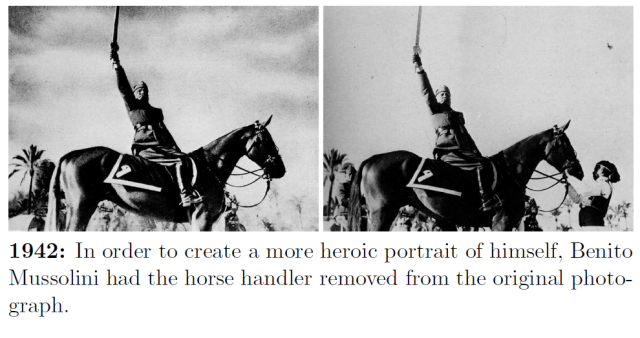 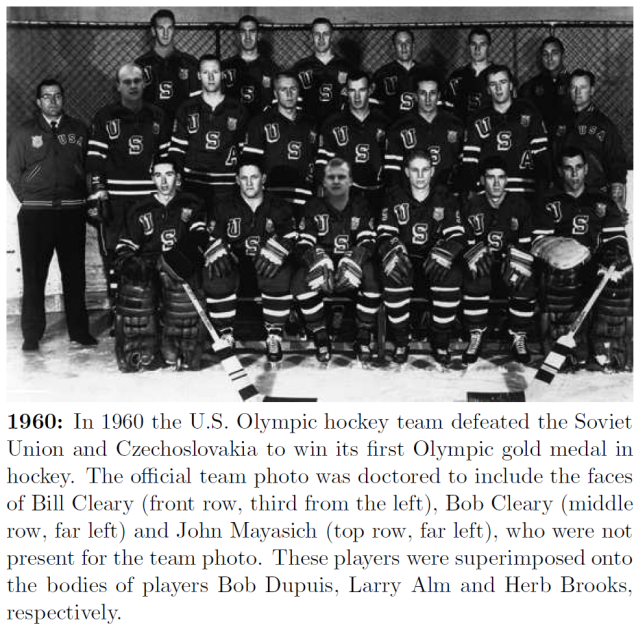 Re: FAKERY across the ages

The Germans acted brutally in Russia during WW2. No doubt about that. But some of the pictures of Germans shown as totally inhuman and as monsters were fakes manufactured by the Soviet propaganda machine. Given below are a few such images.

The source, and a couple more photos here:
http://historyworldwar2-bodong.blogspot ... ty-in.html

I wasn't sure whether to upload the above fake version of the photo or not as I find it quite sickening, especially considering the original. When I first saw the original though, I did lol a little at how such a ridiculous scene could be made into something so sinister!
Top
Post Reply
33 posts