I can say a few words on this from diving experience. I've dived on WWI/Ii wrecks and some were allegedly sunken by subs. And the idea to approach enemy ships submerged to avoid detection makes sense. And the technology - A steel container that keeps the water pressure out and a system that removes carbon dioxide from the air and adds oxygen, is feasible.

The "atomic" subs are of course just for show however and there are no "intercontinental" missiles they could have fired.

Edit: This is now coming up as a nag screen when I'm browsing Reddit. More internet censorship in the works?

THE EU COPYRIGHT DIRECTIVE: WHAT REDDITORS IN EUROPE NEED TO KNOW

We’ve repeatedly warned about how an overbroad EU Copyright Directive could restrict Europeans’ equal access to the open Internet—and to Reddit. But time is running out to make changes. Click below to learn more and make sure that EU lawmakers’ good intentions on copyright don’t accidentally disadvantage European internet users.

Psychological terror. How would you feel if an officer pointed a gun at you, if you had watched this believing it was real?

My vote is the above video is scripted.

If guns were pointed at me in such a scenario my first reaction would be to look behind me and see if the guns were pointed at someone else, such as a dangerous perp in the background, as the use of such ridiculous force against unarmed civilians is extreme and logically not intended for me. Neither of the couple looked behind them. A plain clothes police person could have easily and quietly escorted the pair into a conference room on the first floor when the pair entered the hotel where a few officers with handcuffs could be waiting.
Top

I've just taken a quick look at recent events ("Yellow Vest" movement) taking place in France, and my first thoughts are is this being contrived and covertly funded/controlled by banking-and-intelligence interests?

The image below, posted in world wide media outlets, originally brought these thoughts to mind, namely the striped flag (OK, it's not blue stripes) behind the women holding on to the traffic light with only three fingers, which, unless you have a missing finger, i'd imagine you more than likely use four and another issue is the giant next to her, ok, he may have been there to help her climb the traffic light because it looks pretty awkward and high to scale.

For three weeks, tens-of-thousands of French protesters have donned yellow vests and marched throughout Paris. While the "yellow vest" movement began on November 17 as a grassroots protest against president Emmanuel Macron's gas tax - levied in the name of climate change, it has morphed into a general rage against the French government in general at a time when Macron's approval rating is at an all time low.

What's more, the movement is spreading - with yellow vest demonstrations seen in Belgium, Italy and the Netherlands by those expressing frustration over similar issues. The protests have turned violent, as disaffected rioters have been setting cars on fire, causing structural damage, and assaulting the police.

Now the French riot police are taking their helmets off as a so called 'gesture of peace', obviously the officers had no fear of losing their jobs and pension through neglect of duty, maybe the highly trained officers didn't think the job wasn't worth getting injured for, either that or they were authorised to do so.

As France has been struggling to cope with a surge in violent protests that has left hundreds of police and demonstrators injured, a video showing officers making an unexpected conciliatory gesture has gone viral.

Footage posted on social media shows a group of about two dozen police officers in riot gear removing their helmets while standing just meters away from a crowd of Yellow Vest movement protesters – an umbrella group behind the massive rallies that have gripped France for several weeks.

If protests are real, as the state you still want to get out in front of them with your own video of fake protests that define what you want the protests to be about.

My feeling is the French government is trying to implement some substantial structural reforms - because they don't have a choice but to do so. And people who are afraid their position in society will get downgraded are coming out trying to stop the reforms. The other thing with reforms is that various politically powerful interests realize that if you can 'reform' one area, you can reform any area. So they will come out in solidarity with whoever is targeted first. So you knew it was going to be a political storm once the reforms began.
Top


aa5 on Wed Dec 05, 2018 12:46 am
If protests are real, as the state you still want to get out in front of them with your own video of fake protests that define what you want the protests to be about.

My feeling is the French government is trying to implement some substantial structural reforms - because they don't have a choice but to do so. And people who are afraid their position in society will get downgraded are coming out trying to stop the reforms. The other thing with reforms is that various politically powerful interests realize that if you can 'reform' one area, you can reform any area. So they will come out in solidarity with whoever is targeted first. So you knew it was going to be a political storm once the reforms began.

For the record, so far as the reality of the yellow vests is concerned, at least where one of them certainly was real. As to the extent of any other protests, who can be sure unless they are at the scene?

I live in a small village just off the D76 which takes me to Mur-de-Bretagne across the N124 highway. The D76 from my village is at the top of a very long hill, which, if memory serves was the 81st leg of the Tour de France, which is the (very long) hill climb. It happens every four years and was held this year.

On Saturday 24th November, after crossing the N124 I was stopped by a barricade of yellow-vested chaps, asking me if I had a yellow jacket (a requirement for all drivers. I had to fumble around for it and they placed it inside the car near the windscreen. i bought my stuff from the local supermarket and on return, because I had the vest showing was allowed on my way.

If you are interested in the French situation, I recommend this very well written article I read today.

Dear Sharpstuff, I clicked on the link you provided and the first thing that stood out for me was the image of the French flag clearly highlighted, as in the previous image I posted earlier.

Has it been added to the image? A quick method of attaining if an image is possibly fake I find useful is by enlarging the image and see if the pixels are uniform, in this instance they are not if the flag is matched with the background (i.e. lamp-post). Secondly downloading the image to
FotoForensics also gives an indication if the image has been manipulated, and in this instance it does for example the flag pole is white whereby the lamp-post is not). Even if the image has not been manipulated it still does not disguise the fact that the flag has been specifically highlighted which points to a nationalistic agenda which appears to be on the uptake on recent times.

Europe and nationalism: A country-by-country guide

Add to this the UK and Brexit issues, then it could be viable that there is a nationalistic agenda behind the 'yellow vests protest', who is conducting it is another matter, however an interesting article linked below suggests it could be the British.

Europe’s powder keg is growing dangerously close to an explosion as unrest spreads from France to surrounding mainland nations. These protests are unified by many different factors such as dissatisfaction with mass migration and anger at economic failures blamed on President Emmanuel Macron. But most significantly, they are united by the use of yellow by those who have taken to the streets.

The “Yellow Vest” protests are in fact, a color revolution.

While color revolutions can morph into popular resistance movements, they are at their core professionally organized and instigated, sometimes at the state level. In the case of Europe’s Yellow Revolution, the big winner, and also one of the only states to avoid unrest, is Great Britain.

A couple years back I was looking at an OECD table of the developed countries government taxation as a percentage of GDP.

Switzerland, America and Australia were in the low 30%.


The French number struck me as unsustainable. I figured sooner or later they would hit the wall, and it would no longer be ideological choices, but decisions would be forced upon them. It is the creditors to the country which start calling the shots. I viewed that Macron was an agent of the creditors, being that his biography says he is an ex-Goldman Sachs banker.

Anyway this is why I agree that the protests and unrest in the country are real - even though like I said I can see the government will put in fake protests and images in order to get in front of it.
Top

If Bush, Cheney and those other folks were criminal bastards that murdered innocent Americans in 9/11 as those wacky conspiracy theorists claim, then they would of course not be friends with a nice woman like Michelle Obama...
Very clever phycological tactics. 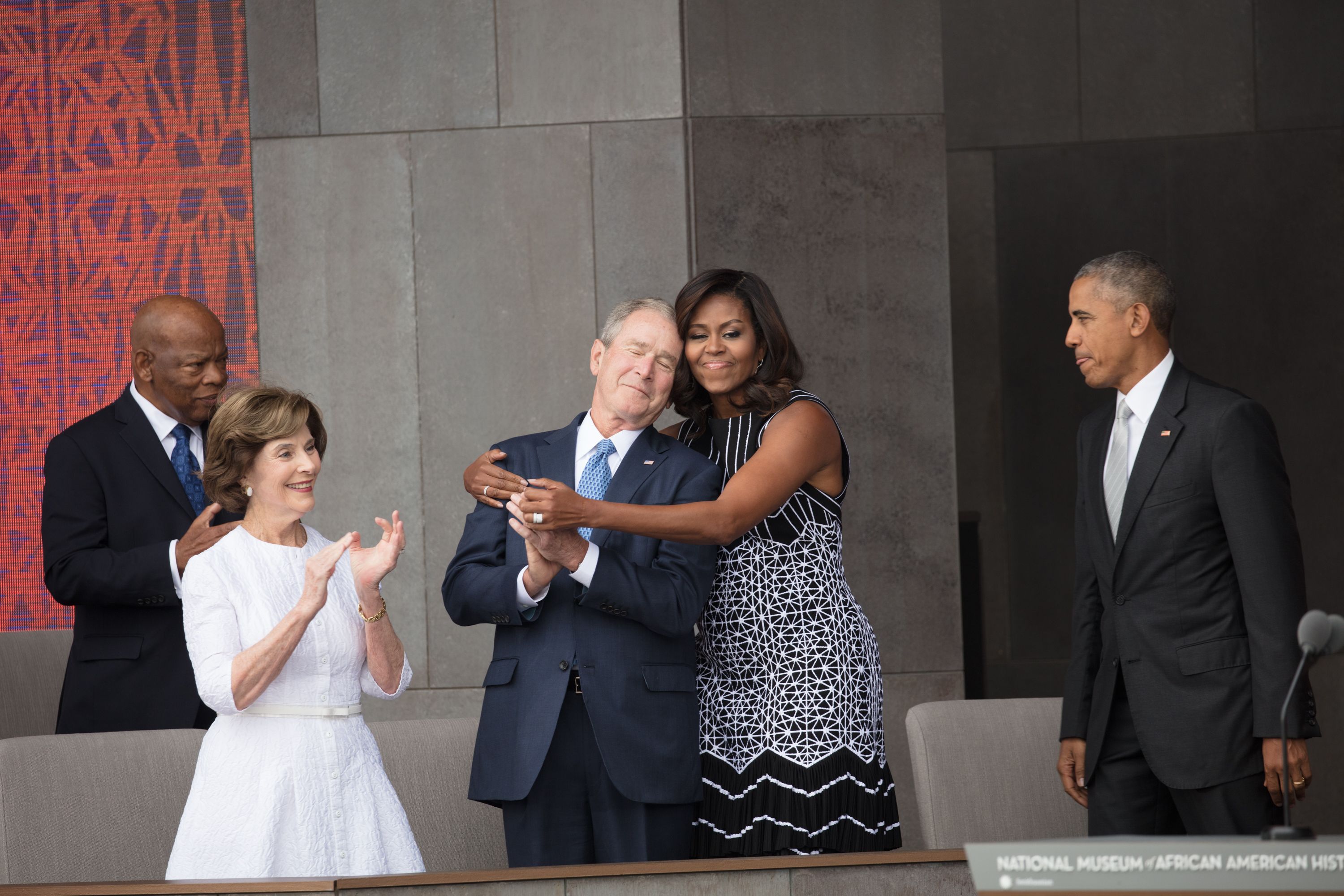 Wake up people. 9/11 was a SeptemberClues movie and news and politics are nothing but a show. They're all in on it.
Top

The two parties and democracy is such a brilliant way to keep the masses happy.

You see the Matrix can be whatever the people want it to be.
Top

"The so-called Left-Right political spectrum is our creation. In fact, it accurately reflects our careful, artificial polarisation of the populations on phoney issues that prevents the issue of our power from arising in their minds"
- The Occult Technology of Power
Top


My post was directed to Patrix's continuing declaration that "[emotional] veganism is a psyop."

I'd like him to explain how he thinks it is a psychological operation, and to what end.

Fair enough. I’m sure Patrix can speak for himself about that. Or he may choose to clarify if he wishes. I for one don’t know anything about such a psy-op.

I wasn’t in the best mood last night, and it spilled over into my posts. I am sorry for that.

Thanks to Dani for not imposing a temporary ban on me.

I’ll move this to the CHATBOX.
scs

Re: How to Embed Videos on the Forum

I re-created this topic (on the “how to embed” topic only) to see if that would fix the issues experienced by some of our members. The “view count” ended up being reset in the process.

That one is on me. Sorry about that.

[Note: I moved this post here- so as to not unnecessarily clutter up the active topic board.]
scs

[Admin Notice by SCS: Dear Observer, Simon has already asked you to communicate with him about this via email. Please do just that, and copy me so I may follow along. But, I can’t allow you to circumvent Simon’s request by dropping it in the CHATBOX.]
Top
Post Reply
4929 posts