Is an "earthquake machine" being used?

Historical insights & thoughts about the world we live in - and the social conditioning exerted upon us by past and current propaganda.
Post Reply
First unread post • 39 posts

No problem cluedin, for a more in depth explantion follow the link below...

Error Level Analysis (ELA) permits identifying areas within an image that are at different compression levels. With JPEG images, the entire picture should be at roughly the same level. If a section of the image is at a significantly different error level, then it likely indicates a digital modification.

Look around the picture and identify the different high-contrast edges, low-contrast edges, surfaces, and textures. Compare those areas with the ELA results. If there are significant differences, then it identifies suspicious areas that may have been digitally altered.

In the earlier photo of the doc and army helpers it can be clearly seen that the doc and first aider have different textures to the army personal suggesting they have been digitally added to the image. The original image was resaved one time. To the human eye, there is no visible difference between the original and the resave image. The resaved image was digitally modified: books were copied and a toy dinosaur was added. ELA clearly shows the modified areas as having higher ELA values.

Much the same as the apparent women survivors covered in dust... Also notice the yellow tape appears purple whist the yellow logo on the pot bellied woman is white and the mans trousers are not consistent with his shirt.

OK, it's not conclusive proof but ELA combined with image enlargement techniques quickly raise suspicions that certain images we are shown by the media have been modified and are not what they appear to demonstrate, and if that the case then an individual has to draw his own conclusions as to the actuality of the event the images are portraying.
Top

Thanks Kickstones! The example with the books and the dino was perfect. I appreciate the time you took to provide me with more than 1 sample.
Top

Here's a few more images of the apparent damage caused by the earthquake that look suspicious...... Appears the car placed on top of the rubble.

[admin notice (Simon): I have replaced the above image link - since the Getty Image link you posted was broken. You've gotta love the "Hero New York" t-shirt walking by...

It would appear the car is added to the image with rubble placed on top.

From a slightly different angle, in this image it would appear the same car but the rubble has changed... My comments on the above two "Crushed White Porsche" images :

- The rubble most definitely isn't the same - and cannot be due to any displacement of the same between the two (purported) "photo shoots".

- The expensive Porsche Roadster car model was likely chosen to compose those images for maximum "OH NO! effect" on the part of 'Joe public'.

- Note the two different (male & female) white-blue striped t-shirts to be found in the two images.


In Italian news outlets I can read that :

-"29 buildings / houses collapsed" in this Mexico earthquake.
-"21 children died in the collapse of a school".
-"3.8 million people were left without electricity"
-"THE COINCIDENCE [sic]: Today's earthquake happened on the anniversary of the 1985 Mexico City earthquake. Just today, an earthquake drill / exercise was being held in the streets of Mexico City."

I've only briefly analysed this one, Indonesia's devastating quake-tsunami last Friday, however, here are a few images being put out by the media...

A victim of the earthquake and tsunami receives medical treatment inside a hospital in Palu, Central Sulawesi, Indonesia. Reuters 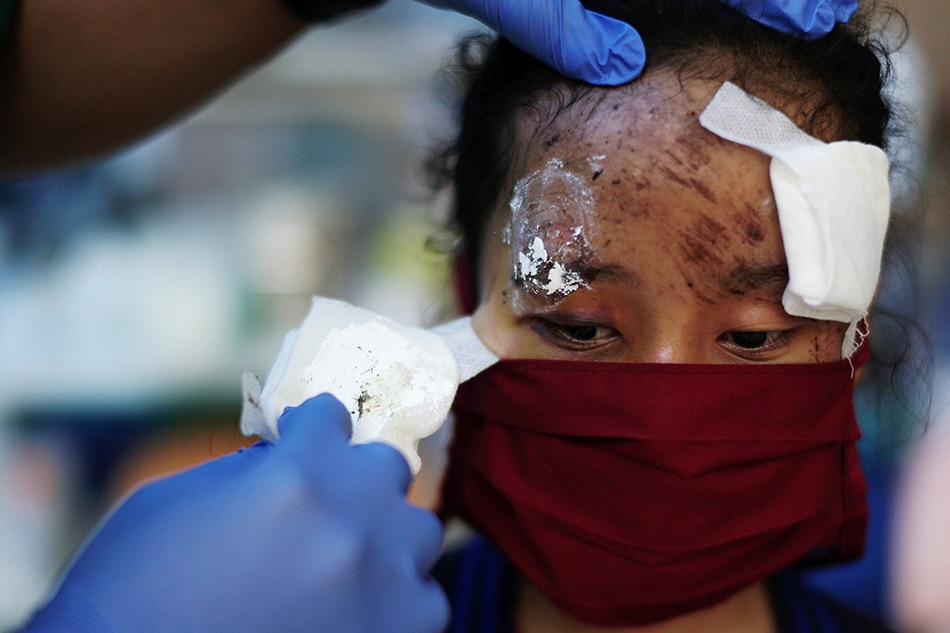 If the image is saved and enlarged it would appear that what ever it is over her left eye as been added along with the white bandages to the original image, in my opinion.


A survivor walks under a car struck on a building in Palu, Indonesia's Central Sulawesi yesterday, after an earthquake and tsunami hit the area on September 28. Ignoring the improbability of the car being balanced on the small brick wall, after having being flung with tremendous force through the air, notice the background is different, more of the trees are shown for example.
Top

Here's a rather touching story....

Indonesia tsunami: Air traffic controller 'gave his life so plane could take off'

An air traffic controller was hailed a hero after he sacrificed his own life to ensure a passenger plane carrying dozens of people safely took off during an earthquake in Indonesia.

As his colleagues fled the Mutiara SIS Al-Jufrie airport, near Palu, in Central Sulawesi, 21-year-old Anthonius Gunawan Agung held his ground as the 7.5-magnitude earthquake struck.

He had just cleared Batik Air flight 6231 for takeoff as the ground started to shake, but instead of running for safety he waited until the plane was airborne before finally leaving the air traffic control tower.

Trapped as he attempted to flee, Mr Agung was forced to jump from the fourth storey of the tower as the tremors grew stronger.

He suffered a broken leg and internal injuries and although he was taken to hospital, he died while waiting for a helicopter to take him to a different hospital for specialist care.

Air Navigation Indonesia spokesman Yohannes Sirait said Mr Agung’ decision to stay behind cost him his life, but he may have saved everyone on board the plane as the city was later ravaged by a tsunami.

Mr Agung, who would have turned 22 on 24 October, had his rank increased by two levels in recognition of his “extraordinary dedication”.

Soldiers carried his body as it was transported for burial. 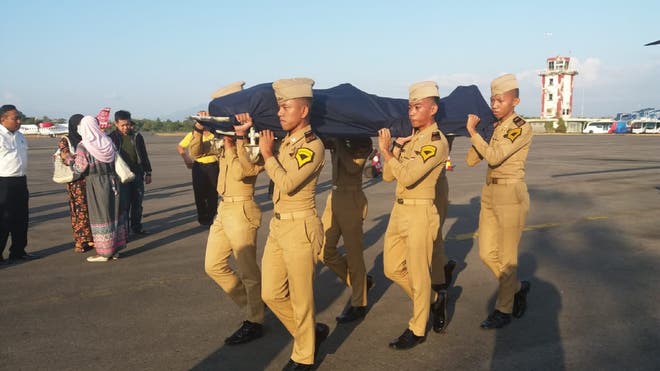 Soldiers carry the body of Anthonius Gunawan Agung, a 21-year-old air traffic controller who died after staying behind to make sure a passenger plane took off safely when a 7.5-magnitude earthquake hit the city of Palu, in Indonesia (Air Navigation Indonesia)

Ha ha, that's about one of the worst photoshoped image I've seen for a while, where's the soldier at the back shadow? What's he holding on to, the dead mans leg? Where's his other hand?

And according to the narrative he was taken to hospital and died while waiting for another helicopter to take him to another hospital. So unless there was a hospital at the airport they then brought him back to the airport to then take him away to be buried.
Top

Ha ha, that's about one of the worst photoshoped image I've seen for a while, where's the soldier at the back shadow? What's he holding on to, the dead mans leg? Where's his other hand?

And according to the narrative he was taken to hospital and died while waiting for another helicopter to take him to another hospital. So unless there was a hospital at the airport they then brought him back to the airport to then take him away to be buried.

I nearly got dizzy looking at that image. It’s all sort of messed up.

But, I don’t want anyone to misread my comment as an expression of anything except extreme skepticism of this particular “hero story,” which I frankly find absurd, even in the absence of a clearly photo-chopped and disorienting image.

I’m also not sure whether this has anything to do with an “earthquake machine” being used. That said, it is objective evidence of media fakery.

This does appear to be consistent with a pattern of fabricated stories in the aftermath of natural disasters for propaganda and perhaps some other (unknown) purposes. Talk about the waters continuing to get muddied up at every opportunity.

I’m sure our critics and the more or (often) LESS sophisticated disinformation artists would love to put words in a person’s (particularly mine) mouth by saying, “see, this CF member thinks that earthquakes and tsunamis are fake because he made a post that identified a photoshopped image on their forum.”

But these straw man “arguments” are nothing new, and will continue unabated as a go-to method for such characters acting in bad faith.

Good find Kickstones, and since The Independent will definitely delete that proven photo-shopped image soon, here's an archive for posterity (of their 3 times larger version) of the undeniably shadow-less soldier which you found:

I wonder is that the tower he “jumped” from, in the background...4 tall “stories/storeys” indeed...
Top
Post Reply
39 posts