Historical insights & thoughts about the world we live in - and the social conditioning exerted upon us by past and current propaganda.
Post Reply
First unread post • 64 posts

A Latvian emigrant to the US and self-taught engineer by the name Edward Leedskalnin (Edvards Liedskalninš, 1887-1951) spent 28 years of his life building a whimsical rock castle for himself on a god-forsaken pebbly tract in Florida. The original name was “Ed’s Place”, but after relocating the construction, he renamed it “Rock Gate”. The touristy name “Coral Castle” was introduced decades after his death.

Leedskalnin quarried and sculpted over a thousand tons of oolitic limestone. The blocks weigh several tons each, with the largest one at 27 tons. The fit is said to be good enough to prevent light from passing through the joints. Reportedly, no mortar was used (I am not so sure about that).

The most famous structure is an 8-ton revolving gate (thence, the name “Rock Gate”). In 1986, it was discovered to have a hole drilled from top to bottom containing a metal shaft resting on an old truck bearing.

Ed lived alone and worked mostly at night. It is claimed he never let anybody see him working, but this is hardly true: a book about his techniques (“Mr. Can't Is Dead”) was written by someone who claims to have witnessed them, and a contemporary documentary filmed him at work. This of course doesn’t rule out the possibility he was pretending when observed by others in order to protect his secret (reverse magnetism?).

Regarding his alleged secret construction technique, he said:


- It’s not difficult if you know how.
- I understand the laws of weight and leverage and I know the secrets of the people who built the pyramids.

The only advanced tool that Leedskalnin spoke of using was a “perpetual motion holder” (see further below quotes from his pamphlet on magnetism). As shown in the photograph above, his tools were made with salvaged timber and old car parts.

When asked why he committed his life to building a castle he always answered he did it for his “sweet sixteen”, a girl by the name Agnes Skuvst (or possibly Hermīne Lūsis) he was supposed to have married back in Latvia. Some have hypothesized the number 16 is actually a reference to a numerological or scientific system.

I don’t see much likeness between Leedskalnin’s crude “coral block” construction and the megalithic sites discussed earlier in this thread, but it’s worth noting that he did manage to cut and lift into place very large stone blocks single-handedly. One interesting point is that, over a 3-year period beginning in 1936, he moved the entire original castle to another site 10 miles away. The truck driver is said to have been instructed to go sit in the shade and look the other way while the blocks were loaded, but that is a bit too fanciful to take seriously.

Four of the five pamphlets Leedskalnin wrote (copies of which were sold in his gift shop) dealt with the interaction between magnetism and the body. The fifth pamphlet (“A Book in Every Home”) was on moral education. In it, only the pages on the left side were printed. The reason for this was given in the introduction:


Reader, if for any reason you do not like the things I say in this little book, I left just as much space as I used, so you can write your own opinion opposite it and see if you can do better.

But why was Leedskalnin so interested in magnetism if his all-embracing obsession was building with stone blocks? Did he or did he not use reverse magnetism to lift his blocks? His most well-known pamphlet contains curious statements about the nature of magnetism (in line with the concept of "magnetic moment" or "electron spin theory", not the standard model of electromagnetism), but no direct mention of construction work, at least for the uninitiated. The passages below have been slightly edited for synthesis.


- The metal is not the real magnet. The real magnet is the substance that is circulating in the metal.
- Each particle in the substance is an individual magnet in itself.
- These particles are so small they can pass through anything. In fact, they can pass through metal easier than through the air.
- They are in constant motion and possess perpetual power.
- Electric magnets hold perpetual motion. If not disturbed, they will last indefinitely.
- Magnetic current is the same as electric current.
- The reason I call the results of north and south pole magnets' functions "magnetic currents" and not "electric currents" is that electricity is connected too much with those non-existing electrons. If it had been called "magneticity" then I would accept it. Magneticity would indicate that it has a magnetic base and so it would be all right.
- The magnetic current is not one current, but two streams running against each other.
- All currents are alternating. One current alone cannot run. To run, they have to run against each other.
- When south and north pole magnets are prevented from passing from one wire to another, they create an expanding bubble from which they run out, carrying metal sparks with them. Breaking up the bubble will show the space left by the magnets.
- They are the cosmic force that hold together this earth and everything on it, and they hold the moon together too, and turn the earth around on its axis.
- The earth itself is a great big magnet.
- This will give you a rough idea of how magnets build up matter.
- Those magnets which are coming from the sun are hitting their own kind of magnets which are circulating around the earth and they hit more on the east side than on the west side and that´s what makes the earth turn around.
- Those people who have been wondering why the moon does not come down, all they have to do is to give the moon one-half of a turn so that the north end would be on the south side, and the south end on the north side, and then the moon would come down. At present the earth and moon have like magnet poles on the same side so their own magnet poles keep them apart, but when the poles are reversed they are pulled together.
- Here is a good tip for the rocket people: make the rocket´s head a strong north pole magnet and the tail a strong south pole magnet, and then lock on the moon´s north end. Then you will have better success.
https://drive.google.com/file/d/14qylYJ ... sp=sharing (1945)

Addition: You may also want to check out kickstones' post from 2015 about Leedskalnin´s theories on gravity and magnetism: http://cluesforum.info/viewtopic.php?f= ... 5#p2395495 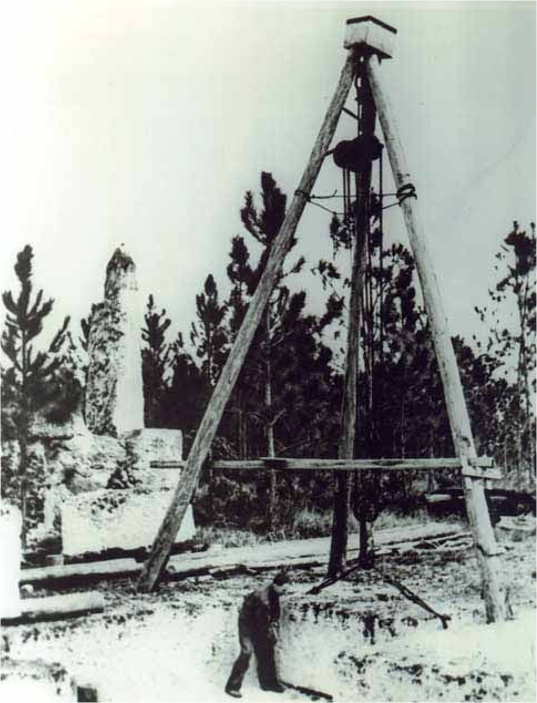 Not everyone is persuaded the contraptions shown in pictures and documentaries were capable of doing the job. In this picture, if Leedskalnin is removing a block from the quarry, how did he free it from the bedrock and get the rope below it without lifting it?

At 64, Leedskalnin walked into a hospital and died of complications of malnutrition and stroke. His diet was limited to sardines and crackers.
Top

Flabbergasted wrote: ↑
Sat Jun 13, 2020 10:27 pm
If Leedskalnin is removing a block from the quarry, how did he free it from the bedrock and get the rope below it without lifting it? 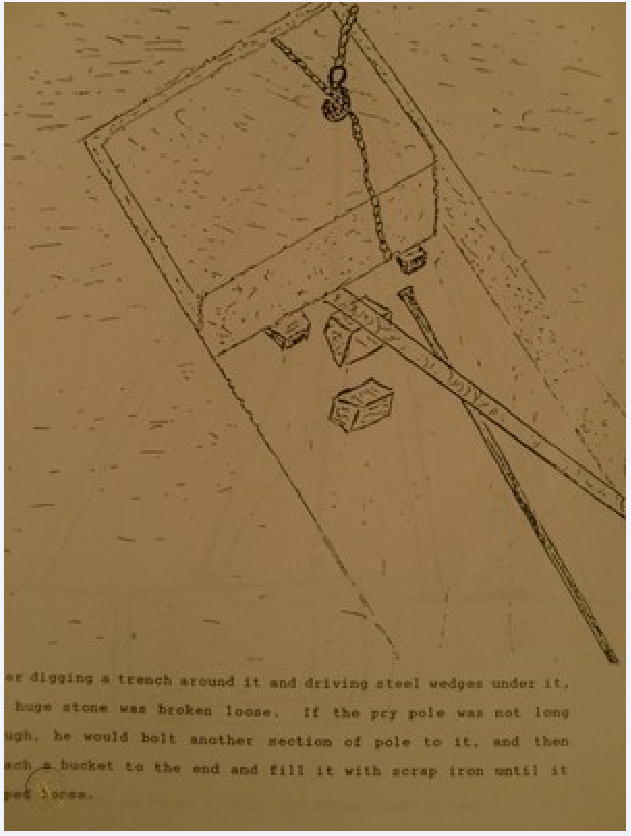 In any case, chapter 7 in the book is titled "No secret method".

Flabbergasted wrote: ↑
Wed Jan 29, 2020 10:05 pm
Interestingly, back in the late 19th century and early 20th century, the case for human evolution from apes was based on archeological evidence of very poor reporting quality. On the other hand, contemporary evidence for extreme human antiquity (the so-called 'anomalous evidence') was swept under the rug even when the reporting quality was high. A perfect example of double standard. For instance, the story about how Java Man was "discovered" and marketed is hilarious. I will try to find some time to summarize it in a post.

Sometimes I almost keep my promises

Here are the first 30 pages of Cremo's chapter about the Java Man swindle:
https://drive.google.com/file/d/1fkLYCn ... sp=sharing

Ernst Haeckel wrote about Eugène Dubois, the pseudo-discoverer of Java Man: "He has actually provided us with the bones of the ape-man I had postulated". In congratulating Dubois, he sent a telegram "from the inventor of Pithecanthropus to his happy discoverer."
Top
Post Reply
64 posts