The most common objection people have to our research: "Too many people would have been involved to pull off such a massive hoax." Well, with trillions of taxpayers' dollars at hand, this operation could certainly afford contracting many individuals (under a gag order and on a need-to-know basis). Meet the real - and unreal - persons, companies & entities assigned to carry out this gigantic, media & military-assisted psyop.
Post Reply
First unread post • 5 posts • Page 1 of 1

This came up on the TVlegends youtube channel (http://www.youtube.com/user/TVLEGENDS?feature=watch) last month (but was probably recorded in 2011).

It isn't irrelevant or arbitrary I think to consider the typical lying gesture (stroking his nose) that King makes, as he proposes the circumstances and details of his first learning about 9/11.

(It is very typical, as this forum occasionally documented, for known figures and celebrities to lie about the how and where they first learned about 9/11. I dare speculate that this could be because all these people that day gathered in few elected undisclosed locations to celebrate the event and watch it live, well knowing it was going to be the greatest performance of faked live TV they were going to witness in their lifetime. When they came back home that day, thrilled and still drunk with the feeling of privilege and power that came from being among the few who were conning the rest of humanity, each had in his pocket a brochure of made up lies and alibis for them to use in the outside world.)

Of course it is ridiculous and outrageous (but also certainly a "wink" to those in the know) for King to compare 9/11 to a movie trailer: the movie in question was obviously "Collateral Damage", which came out in February 2002. But why would King even think about this 5 months earlier? How would he even have on his mind such a particularly irrelevant hollywood almost-B movie?
Funnily enough (not), here is what wickedpedia has to say about the connection between "Collateral Damage" and 9/11:


The September 11, 2001 attacks affected the release and editing of the final film. The original trailer was scrapped because it showed a major bomb attack in the U.S.
From http://en.wikipedia.org/wiki/Collateral ... %28film%29

Did King read this wickedpedia entry? As yours truly registered on this forum a while back, Collateral Damage was indeed one of those movies stuffed with foreknowledge about 9/11, one that, not unlike "S1m0ne", probably came out too late only because of production problems, but was originally meant to join the trove of pre-9/11 hollywood productions designed to prepare the psychological ground for the big scam. Among others it contained this scene:

He also appears to be dressed up as one of the twin towers. Nice shirt!
Top

I just searched Google for: Larry King 9/11
and a link to this thread was the 9th result in the list.

But, I wonder: is that only for me because Google is tracking my habits?
Top

lux wrote:But, I wonder: is that only for me because Google is tracking my habits?

Interesting question. I should think it is the result of tracking unfortunately! Try using a different browser (or deleting cookies and cache) and repeat the search. I normally use firefox but have other browsers such as IE or chrome at hand exactly for such purposes.

I tried and got this:

It is indeed pretty awful and slick the way Google profiles everyone, worst than a mall with their fidelity cards and stuff monitoring our spending habits.

Anyway the search produces the somewhat interesting yourube video of the Larry King Live show that CNN apparently aired on the evening of 9/11:

In this video we hear John Kerry saying that he had a friend on the "plane from Boston". Does anyone know who that friend might be? Let us not forget that John Kerry made a cameo appearance on Cheers (as visible here: http://www.youtube.com/watch?v=Z8cYgYU5OGI). Is that "friend" supposed to be none other than "David Angell"?

(During the show, while the big wigs tell us how dangerous the world is and how bold the response must be, we are also shown on and on the relevant clips of that day: the amateur shots, all the fake imagery... it is impressive to see how the clips are already all there. The first day, and all the relevant (and poor) amateur material is already in, and as such it will stay, for almost a decade until the NIST. How not to see by this absurdity only how this was all staged...?)
Top 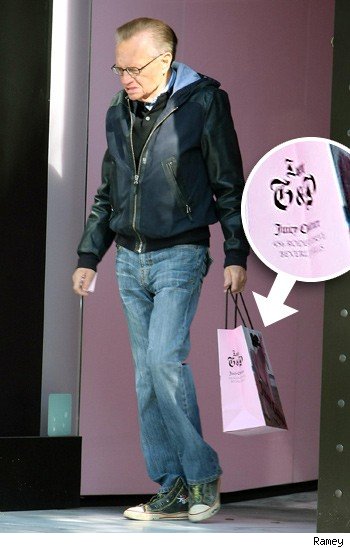 Larry's a real trend-setter when it comes to clothes. Who does he take his fashion tips from, the ghost of himself when he was 13 or Fonzie ? But wait, Fonzie would never be caught dead with a pink mall bag.