If NASA faked the moon landings, does the agency have any credibility at all? Was the Space Shuttle program also a hoax? Is the International Space Station another one? Do not dismiss these hypotheses offhand. Check out our wider NASA research and make up your own mind about it all.
Post Reply
First unread post • 1544 posts

When you consider the increasing likelihood that nobody has actually been to outer space and/or lived to tell of it through these NASA entertain-a-ganda programs, the harness exercises to "prepare" people for "low gravity environments" appears as little more than strange adults playing pretend to fascinate children and other deluded adults — or denying that theater is theater.

These videos begin to feel like voyeuristic peeks into the lives of a crowd that stumbled on way too much scam money to know what to do with it. If this is the kind of silly nonsense they produced for the "benefit" of the public, what must their private drug and sex parties be like now?
Top

Thank you pov603 but from studying some videos earlier in this thread I understand there are much more sophisticated ways today to suspend people in wires and simulate weightlessness. So it's safe to say it's fake, but to find out exactly how they do it I'd have to become a freemason I guess.

You don't have to be a freemason, you've just seen exactly how they did it on the moon and how they did/do it for many ISS shots.

For some ISS shots, where they are chatting, they are suspended upside down, and for short moving shots they use the vomit comet.
Top

@Simon: Thank you. Watched it last night. Very interesting. It had everything including the Lunar Landings and the iconic shot of the first step more than 10 years earlier. Amazing how fiction can predict things....

@Hoi: Yes it's weird. I find myself fascinated on an intellectual plane by all this but let's not forget how sick these people are. And I agree on what you wrote on Kubrick. He was an accomplice and the Shining "confession" and Illuminati symbolism in his movies are most likely just more propaganda and more disinformation.

@Peter: True. The things shown on the NASA movies are basic FX, and sometimes astonishingly bad.

It's astonishing how they use FX, or I should say CGI, also in conferences. In my opinion, one of the three people in the oval office in this video is CGI, at least her face. Guess who?

Another astonishing thing, that proves the fakery of the space walks, is the absence of the ballooning effect in the space suits due to zero pressure in outer space. 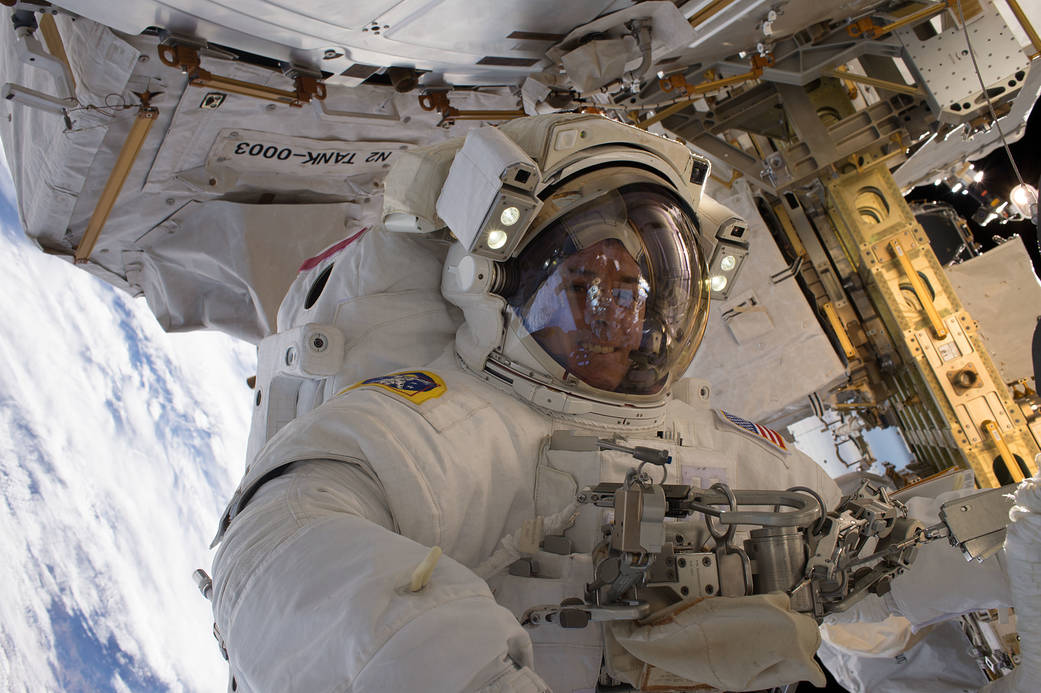 Of course NASA can explain this and all the other anomalies in the graphic images, for the gullible people.

I have only found this reference to this fact in the forum before in these posts, although without explanations. I think it is obvious that the suit should be inflated in outer space.

agraposo » May 12th, 2017, 9:35 pm wrote:It's astonishing how they use FX, or I should say CGI, also in conferences. In my opinion, one of the three people in the oval office in this video is CGI, at least her face. Guess who?


I am more fascinated by this "in-your-face-slip-of-the-tongue" by America's current Cuemander-in-Chief :

"Dr. Whitson, I just...congratulations...it's amazing, what an amazing cheat..uuuuuhh...thing that you've done..."
Top

Funnily, if you fast forward the vid watch the 'gumballs' and the Velcro on the left handside of the screen...hmmmm...
Top

agraposo » May 12th, 2017, 9:35 pm wrote:It's astonishing how they use FX, or I should say CGI, also in conferences. In my opinion, one of the three people in the oval office in this video is CGI, at least her face. Guess who?


I am more fascinated by this "in-your-face-slip-of-the-tongue" by America's current Cuemander-in-Chief :

"Dr. Whitson, I just...congratulations...it's amazing, what an amazing cheat..uuuuuhh...thing that you've done..."

That's quite interesting! I would bet that in the unlikely event of someone challenging him on that, they would say he was going to say 'achievement' and changed his mind.

The logical step for me would be to listen through a shitload of Trumps public speechs and hope to find him saying the word 'achievement' in the same way, i.e. missing the 'a'.

Not entirely sure I can face watching an as -yet undefined quantity of Trump videos though.
Top

Before finding this thread, I already came to the conclusion that many people here have, that the ISS ISSN’T. After reading most of the posts in this thread, I don’t think the following have been addressed and I just want to contribute what I think is important.

1. Any single deception should be sufficient to discredit the source, but to make conclusions beyond the single clue might be falling into a trap they intentionally set for people like us. They know not everyone is going to fall for it, so I would not be surprised if they added unnecessary fakery to throw us off the trail. Either that, or they just don’t care about critical thinkers since we’re such a small demographic. For me, the hairsprayed hair is the only proof of their dishonesty. No woman I know, would be willing for her hair to look so utterly ridiculous, unless they were getting paid a shitload of money. I’m not discounting all the other evidence, but for me, the hairspray is enough. I think this little aspect of the ISS miniseries, just demonstrates how easy it is to fool most of the population. I’ve been watching the Sunita video, https://www.youtube.com/watch?v=l7-pLfU0Z1Q, which produces such a wide range of emotions for me, from laughter at the hair, to fighting the urge to vomit when she swallows her toothpaste.
2. In the same video, her necklace is too obviously CGI. It rarely travels up her past face, but when it does, she shows no sign of irritation. For the average human, it would be pretty annoying to wear something which floated around your face all the time. This is such a minor clue really, but for me it is like a slap in the face. I have to admit, however, that I like watching it do its thing and hear the little jingle they give it, nice touch nasa.
3. Despite all the obvious fakery, their ability to make much off it look extremely convincing is what I think makes it so difficult for people to accept the bullshit parts. I listen to this guy’s videos, “Deep Thoughts” while traveling and he recently made a video of the ISS and the obvious fakery, https://www.youtube.com/watch?v=Iv9bmDfa-PE&t=119s. I thought he made some good points about how we might not be able to identify all the problems, but we can smell the bullshit and most people just dismiss the feeling. As a side note, although I enjoy listening to this guy, I have a suspicion that he’s a gatekeeper who’s target demographic are those of us who don’t fall for the flat earth stuff. Despite that, he’s entertaining.
4. All these guys working for nasa: actornots, the guys at mission control…, I suspect are the children of the well-connected who act like a sponge for much of the public money the government steals from us all. They’re probably not the brightest of the bunch like the ones who end up in the intelligence agencies, but they get to have an easy life, doing exciting things all the while keeping all the money in the hands of the important families. Yes, I’ll admit that this suspicion of mine was inspired by the infamous Miles Mathis. Although I only believe 5%-20% of what he writes, he made me realize how all these extremely wealthy and royal families are still around, mostly behind the scenes. I’ve come to see them as not necessarily trying to deceive the world, for the sake of deception, but as a means of capturing market share. IMHO, they see us, “the truth seeking community”, as just another demographic for income capture. For example, they invest in people like David Icke to write books for us to buy. Just for the record, I’ve never bought an Icke book.
Top

I too am unsure of "deep thoughts". His flat earth episodes are the worst, and there are many of them, but I believe the man to be earnest. A gatekeeper wouldn't be bothered to record hundreds of hours of material, and so much of what he says is original, well researched and thought provoking that I personally give him the benefit of the doubt. I listened to his teardown of the ISS hoax today with a smile on my face, although little of it was new to me.
Top

roastrunner » May 25th, 2017, 2:12 am wrote:I too am unsure of "deep thoughts". His flat earth episodes are the worst, and there are many of them, but I believe the man to be earnest.

After I wrote about my suspicions, I felt a little guilty. Instead of accusing the Deep Thoughts guy of gatekeeping, I should only focus on specific actions/comments and avoid labeling. He acts totally sincere and seems like a pleasant and likeable person.
Top

roastrunner » May 25th, 2017, 1:12 am wrote:I too am unsure of "deep thoughts". His flat earth episodes are the worst, and there are many of them, but I believe the man to be earnest. A gatekeeper wouldn't be bothered to record hundreds of hours of material, and so much of what he says is original, well researched and thought provoking that I personally give him the benefit of the doubt. I listened to his teardown of the ISS hoax today with a smile on my face, although little of it was new to me.

I think the opposite. Only a gatekeeper/CIA would spend so much time because they're being paid to do so. Plus they have to produce something to show their superior. If he is Flat Earth that's another tell. No intelligent person really believes in FE.

(On a day to day practical level rather than a deeper level) I have no real problem with disinfo guys or false opposition. With disinfo often comes a lot of info. At least they're talking to us. And often teaching us something. As you say much is "original, well researched and thought provoking".

The power groups may not be unified. They may even be competing with each other. Or the whole thing may be more in a state of flux than is appreciated. If I was working for NASA I'd be really pissed at the CIA (or whatever) YouTubers spending their working day showing me to be a lying clown. Imagine being one of the most idolized gatekeepers like Armstrong or Aldrin when another part of the "team" is paying Bart Sibrel to harass and embarrass you with his bible and his film crew.
Top

Simon, Hoi this bottom picture contains something strange. I have allocated this strange artefact in yellow box. Pay attention to the lens. What or who is reflected there?? 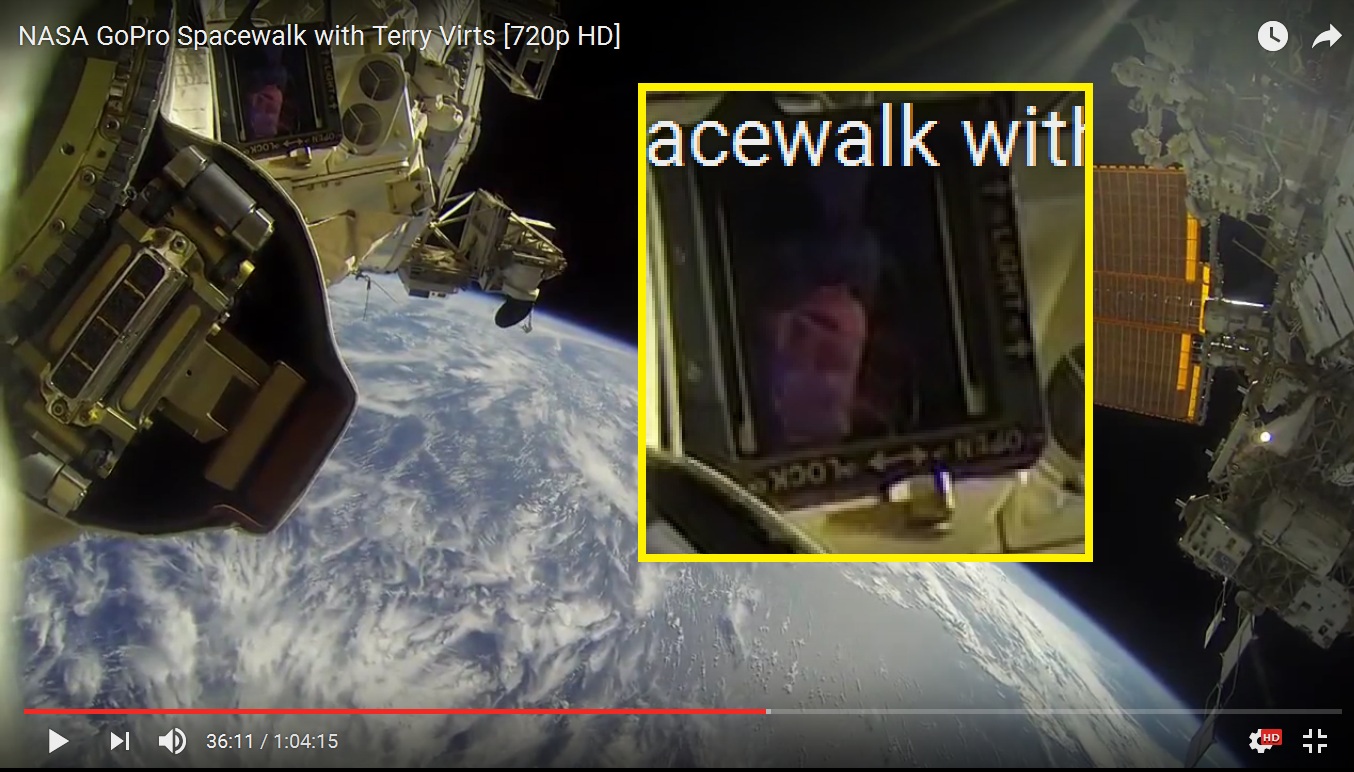 Where is the urgency in the Russian operation room : empty computer areas, the only few people chatting nonchalantly, no one staring at a screen ... with images of our dear leader Macron who is also viewing the landing from the presidential palace.

This French Thomas Pasquet guy has been heavily promoted through the media, with almost daily announcements of his time on the ISS.
Top
Post Reply
1544 posts