Great news, they just found a five foot long 9/11 plane part in NYC.
Pesky little critter was hiding between a couple of buildings this whole time...

Great timing too, this will help dispel all this nonsense about media fakery we are hearing too dang much about lately...

) and another lower Manhattan building.

New York Police Department spokesman Paul Browne was quoted as saying "The odds of this being wedged there is amazing. It had to have fallen just the right way to make it into that space."

I just bumped into this little gem.
It's from a CNN newscast starring none other than Dylan Avery! -

And no - it is not an optical illusion caused by some crossfade edit between one image to another.
Please doublecheck it for yourself by looping the original source video around 0:25 and 0:30 :

There most be more gems such as this to be found in the earlier (pre-2010) rubble imagery. To be sure, they had all sorts of problems keeping their image layers from 'behaving' in unrealistic ways - as we have oft pointed out over the years.
Top

Wow, yet another fantastic cock up by the official bullshitting software! Thanks for targeting and posting this one, Simon. Archives, records and official stories are the gifts that just keep on giving to us researchers. The trail of stupidity is just too damning to get mad about it. It's hilarious. More people will continue to wake up from the simulation.
Top

I just bumped into these two great analyses by our Swedish member Tufa - which I don't think have ever been linked here:

About the WTC RUBBLE:
http://www.tufavideo.net/index.php?t=msg&th=6&start=0

About the "Plane Impact" PHYSICS :
http://www.tufavideo.net/index.php?t=getfile&id=538
Conclusions
The 9/11 is simply a fairy tale. It cannot be implemented in the
real world. The video and still pictures are fake. The Witnesses
are fake. The Dead are fake. The entire thing is simply a Hoax.

A pretty accurate conclusion I would say!

We have oft asked ourselves whether any (or how many) TV anchors are in on the 9/11 psyop - as in "entirely aware of the imagery-based hoax." Now, as we have amply / conclusively demonstrated in this "FAKING THE RUBBLE" thread, we now know that even the available rubble imagery from Ground Zero has been fabricated with modern digital imaging techniques. It logically follows that anyone claiming to have been filmed walking around in that area ( i.e. anyone having been "green-screened into" Ground Zero sceneries ) must be aware of the Big Lie. Well, here's a video titled "9/11 Larry King at Ground Zero CNN Special October 6, 2001":

Please watch at least part of it - before reading on: https://www.youtube.com/watch?v=-voZbC2FQKk In that CNN video, we see Larry King discussing the 'horror of it all" with NY Fire Commissioner Thomas Von Essen. As Larry asks "where are we?", Von Essen duly points his finger in various directions, indicating where Larry should aim his eyes (much like the Weather-Forecaster on TV). In reality, the two of them are likely just walking around some steel junkyard in Detroit, or any movie set /TV studio ANYWHERE else. The surrounding "Manhattan buildings" have been digitally added in the backdrop. But can we actually prove that this is the case - and that this contention isn't just some "figment of our vivid conspiracy-theorists' imagination"?

Well, what we CAN do, is to compare the imagery featured in that CNN video - with the imagery credited to the most famous, prominent and prolific (alleged) Ground Zero photographer of all - JOEL MEYEROWITZ. Let me remind you all about Mr Meyerowitz's unique place in "Ground Zero Imagery History" - due to his claimed "exclusive access to the area":


​Following the tragic terrorist attacks of September 11, 2001, the rubble of the World Trade Center was designated a crime scene by U.S. authorities and access denied to everyone except law enforcement and rescue workers. At the time, the press was prohibited from the site. New York artist, Joel Meyerowitz, became the only photographer granted the right of entry to Ground Zero. (...)

Meyerowitz's historical archive of the aftermath of the tragedy, photographed day and night during a nine month period, grew to include over 8,000 images of what became known as "The Pile."
http://blogs.miaminewtimes.com/cultist/ ... chives.php

Here's Meyerowitz (portrayed in front of one his famous GZ images) - and his books: "AFTERMATH" - and "NINE MONTHS AT GROUND ZERO":

Now, here's that famous GZ image which Meyerowitz is portrayed against.
As we can see, it depicts a big (rusty-red) steel rubble pile - with the two WFC (World FINANCIAL Center) buildings in the backdrop : Here is now an image extracted from "Larry King's visit to Ground Zero on October 6, 2001". As we can see, it depicts the very same rubble pile - apparently still smoldering / fuming, and being water-hosed by firefighters. This 'CNN pile' is certainly not rusty-red, so we must assume that this image predates the above Meyerowitz famous image (and that Meyerowitz snapped his image of this "WTC rubble pile" at some later stage of his claimed 9-month-long efforts photographing Ground Zero...) An animated gif I made from that CNN Larry King clip:

Here's the problem: I have highlighted in green a section of (what is meant to be) part of the still-standing WTC steel structure. That section of steel beams is clearly entirely missing in the CNN video. How is this possible - if Meyerowitz took his picture when the rubble pile had long stopped fuming - and become all rusty? Now, to round this off: even if one would argue that Meyerowitz snapped his shot BEFORE october 6, 2001 - one has to wonder:
would the Ground Zero engineers have opted to 'saw' that section off - while this remaining WTC steel structure was still standing??

Well - it sure seems like a most unlikely proposition!

I rest my case: the extant Ground Zero rubble imagery is as 'authentic' as a three-dollar bill. And Larry King is a complicit, 9/11 hoax clown.
Top

*
Come to think of it, I had already analyzed the various images of this particular "WTC rubble pile" some time ago (on page 9 of this thread):

http://cluesforum.info/viewtopic.php?p=2371292#p2371292
(You will have to check out this earlier post of mine to understand my below comparison).

In fact, we have 3 high-definition images of that rubble pile. I have now singled out a small area of these 3 images for comparison:

The white arrows are only to show how different the "erosion spots" on that steel beam are. Are we to believe that these alleged photographs are real and legit? That these spots somehow dramatically changed over time - before this rubble pile was removed by the Ground Zero workers? Or does it make more sense to conclude that we are looking at a series of phony, digitally-manipulated images?
Top

Good news from JPL Laboratories! They have developed a new radar system for finding survivors in rubble that can distinguish between animals and corpses.

There is still plenty of time to register for the live webinar on August 21st, 2014, for all those who are interested:

The FINDER (Finding Individuals for Disaster and Emergency Response) task manager is Jim Lux, who happens to be a trustee of the JPL Amateur Radio Club, founded in 1958.

The club was formed, largley due to the efforts of Dr. Henry L. Richter, author of: The Universe-A Surprising Cosmological Accident (2006), which, contrary to what the title might indicate, advocates for intelligent design of the universe.

Here is an nteresting NASA narrative on the fear that Sputnik was striking into the heart of America back then:

Apologies for the cross pollination with the Space threads, but the whole media shebang is a tapestry of interwoven fakery, each department playing its role in creating the fabric of their consensus reality.
Top

Indeed! Not many WMDs can compete with such power of obliteration!

As for the visual control of the WTC rubble, a fairly large area must have been isolated for a while after the demolition. But I keep wondering: with all those tall buildings in the vicinity, how was the common Joe prevented from photographing the rubble from his office window? How long is that iconic piece of mock-gothic façade supposed to have been standing?

Both of the above are FEMA images.
Top 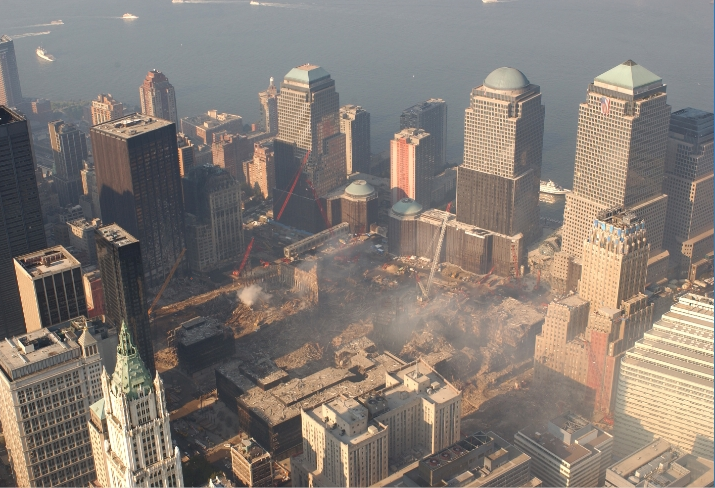 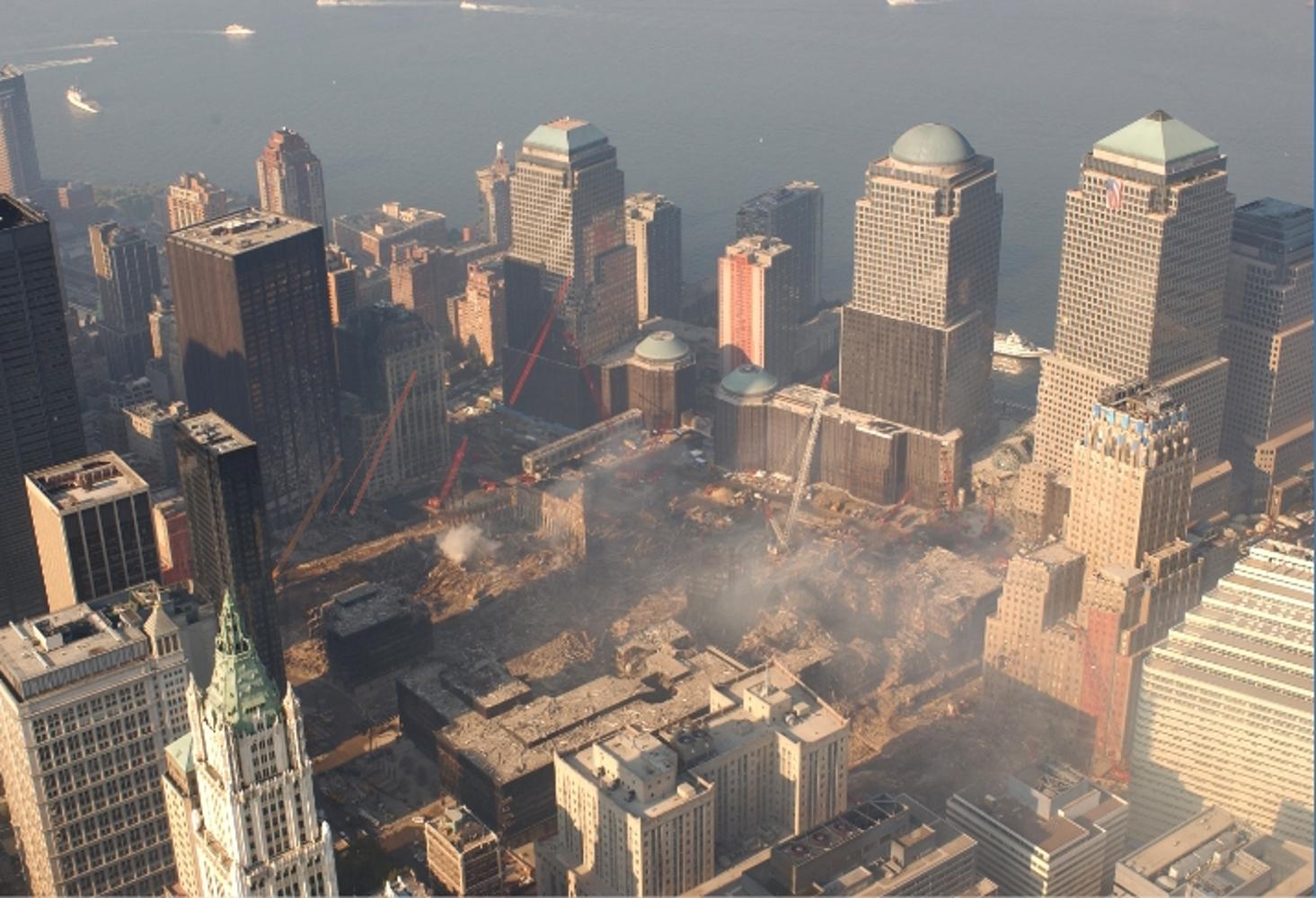 Please download and examine this image close up! You will see that the "cranes", are not cranes but simple transparent lines drawn with Gimp. For demonstration purposes I added another "crane". Do find it!

brianv wrote:You will see that the "cranes", are not cranes but simple transparent lines drawn with Gimp.

I´m just trying to understand why there are no authentic pictures of an area which one would suppose was visible from a dozen neighbor buildings while the rubble was being carted away. Unless cleanup was finished in a couple of days under conditions of low visibility, or the entire city sector was in lockdown, or both. Rather puzzling.
Top

Flabbergasted » 21 Sep 2017, 22:36 wrote:I keep wondering: with all those tall buildings in the vicinity, how was the common Joe prevented from photographing the rubble from his office window? How long is that iconic piece of mock-gothic façade supposed to have been standing?

This is quite the too obvious answer but, most likely, the whole area was in lockdown until the cleanup of the bulk of the rubble finished. The rumors about asbestos were probably enough to justify any such measure.

Let's not forget the complete control over the media as well. If the wrong pictures or videos had somehow surfaced, no doubt there were agents standing ready to confiscate and destroy. It probably took a few decades to plan 9/11 especially for the amount of minute control necessary over a whole chunk of the population. There probably were lists of names indicating how many cameras and videocameras were present in downtown and in the hands of whom. Maybe even names of tourists.

There are probably sources about the lockdown and how long it lasted. I couldn't find much, some info is mentioned here: https://en.wikipedia.org/wiki/Closings_ ... 11_attacks It mentions blocking of traffic until October 13th, it might indicate that downtown stayed empty until then.

EDIT: in Spike Lee's "25th hour" we get to peek a view over "ground zero" from Frank's apartment:

2017-09-24 23_02_49-25th Hour 2002.mkv.jpg
from what the scene shows, the restructuring of the area seems to be already in progress, but we are given the impression that steel bars and debris are still being moved out:

2017-09-24 23_04_35-25th Hour 2002.mkv.jpg
needless to say the whole scene might just be yet another hollywood model. But even if it weren't, the steel bars must added for effect, in tidy small demonstrative piles.
You do not have the required permissions to view the files attached to this post.
Top

how’s this for a bit of luck!

2,400 photos have been “found” at a house clearance sale. they were taken by a unidentified first responder at Ground Zero while the cleanup was taking place. they were on 5 x CDR’s which were in bad shape, but all the data was retrieved!