The CORONAVIRUS "CRISIS" - as reported in the press

Anything on the news and elsewhere in the media with evidence of digital manipulation, bogus story-lines and propaganda
Post Reply
First unread post • 49 posts

As you can easily see and hear, this "newscast" appears to have been meticulously constructed with the sole purpose of diffusing fear, distress and panic - including the background "horror movie" soundtrack. Like many other such "newscasts" that one may find, this clip reeks of crass sensationalism - and an overall lack of realism.

At 8:33 into the video, we are treated to this quote by Prof. Grosselli (the "intensive care specialist coordinating all the IC units across the hospitals in Lombardy" ) :

Woman TV anchor: "Professor, hhow...how do you see this ending?"
Professor Grossetti: "Well, I'm sure that this will end, this will certainly end with the vaccination - and I'm sure that now NO-VAX people will take the shot anyway"

Note that all the hospitals in Italy appear to have set up "special units" (i.e. separate hospital sections) for "Coronavirus patients". How convenient for news crews...

The question now becomes: HOW MANY MORE "hospital drama newscasts" (around Italian hospitals) have been fabricated by the mainstream media?

Thank you very much simon and heniek. I watched this hospital drama and once again i was deeply impressed, but you rescued me!

This hospital drama reminds me of another proven liar, "Nurse Nayirah":


By the way, these worldwide Corona curfews make it so much easier to produce propaganda, because in your new prison this rubbish becomes your only information source!
Top

heniek1812 wrote: ↑
Sun Mar 29, 2020 6:17 am
Along the way I found this video from Arizona showing one very busy hospital doing basically nothing,
https://www.youtube.com/watch?v=gRUbDSa-vbQ

Is that a teleprompter? If so, they can hardly claim the interviewee is an actual health care worker. 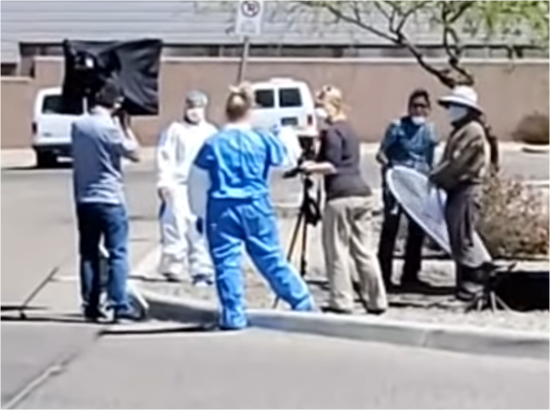 Also, observe the ambulance paraded before the camera around the 10 minute mark.

We should try to find the video they made or if it is a photoshoot then the photos. It would be fun to compare the two.
Top

But perhaps the astute / attentive readers already noticed the curious recurrence of the "11" number? I can only hope that most readers did.

I truly got a big laugh out that small coincidence.

Looks to me like the Italian version of Reuters must be sending every day news reports in pdf files allowing the receiver to just change the name of the town, village or location. Super efficient method to keep the Public "in-formed"

More fun: "Coronavirus death rate is lower than previously reported ... The research, published in the medical journal The Lancet Infectious Diseases, estimated that about 0.66% of those infected with the virus will die."

Well, here’s yet another to add to the “11 collection”:

alovas1980 wrote: ↑
Tue Mar 31, 2020 4:09 pm
More fun: "Coronavirus death rate is lower than previously reported ... The research, published in the medical journal The Lancet Infectious Diseases, estimated that about 0.66% of those infected with the virus will die."

Yeah, this will go down even more as time goes by, as more testing is done world wide. (if you believe the test are even working and there is a virus )

How WHO got 3.4% value just as the virus spread around the world and also from the article:

"Early in March, for example, Dr. Anthony Fauci, the director of the US National Institute of Allergy and Infectious Diseases, said that "if you just do the math, the math is about 2%.""

This is indicative of terrible science at the very least, and most likely manipulation. Fauci gives me the creeps, just like the head of WHO, both very shady. Dr. John C. Ioannidis at Stanford among others has pointed out the poor science and media hype, in a recent published article:

The argument that a lot was not known about the virus at first, and the alleged secrecy with how authorities in China handled it, doesn’t hold. The global media, Fauci and WHO were touting 3.4% long after reports in overall mainland China were finding a fatality rate far less (around 0.4% iirc). In South Korea, where far more testing is done than any other country, they were finding a rate well under 1% as well. I remember talking to friends on social media about this (at the time), and they were in too much shock and fear from the WHO, CDC stats, media reportage, as well as Joe Rogan having that scientist on his podcast making similar dire warnings etc.—to even consider looking elsewhere.

Sky News admitted yesterday that the fatality rate this year from COIVD is going to be the same as flu... but only because people are staying home.

Ok, say there is a virus, and it has a low fatality rate, but enough of those that do get infected require extensive hospitalization and are a drain on resources, so we need to make sure that not too many get infected at once. The way it was done though, was exactly on script with this simulation done by The Rockefeller foundation back in 2010:
Scenarios for the Future of Technology and International Development
https://www.nommeraadio.ee/meedia/pdf/R ... dation.pdf
(The World Economic Forum, another creepy organization with ties to Event 201 and Ghislaine Maxwell's family is part of this.)

At the very least, the media, WHO etc. seem to be trying to create the narrative to match what that paper says, as if there was a true pandemic. What expert scientists like Dr. Ioannidis, with integrity, are finding and reporting, is that the data is insufficient and that the outbreak could have been dealt with in a less alarmist way, like protecting the vulnerable without having the harsh affect on human liberties and the economy, if proper science was done. Which now seems to be the case.
Top

Coronavirus 'could cost global economy $1.1trn in lost income'
"The coronavirus could cost the global economy more than $1tn in lost output if it turns into a pandemic, according to a leading economic forecaster."
https://www.theguardian.com/world/2020/ ... ost-output 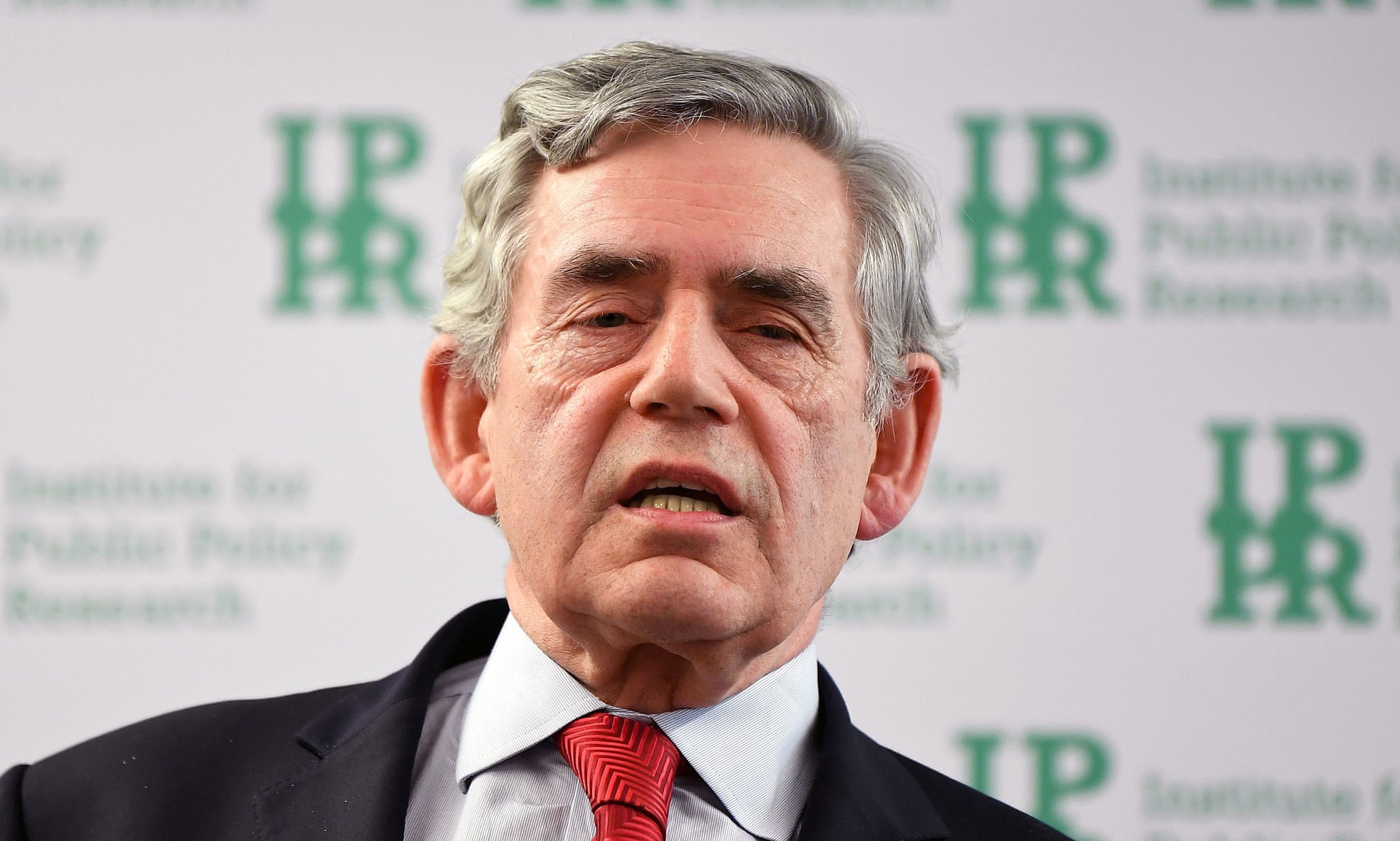 And now the Gordon Brown clown is at it again...

Ex-UK PM Gordon Brown calls for global government to tackle coronavirus pandemic
"Former UK prime minister Gordon Brown has urged world leaders to create a temporary form of global government[???] to deal with the coronavirus crisis. Brown said the proposed global taskforce should oversee and support the development of a vaccine and the production and distribution of medical equipment, and help to deal with the economic fallout of the crisis. To do the latter, it should coordinate the efforts of central banks; take steps to prevent the flight of capital from emerging market economies; and agree a joint approach to the use of government spending to boost growth."
https://www.globalgovernmentforum.com/e ... -pandemic/
Top

*
A case of the Doppleganger

Please, can another member here screenshot, save and upload these two articles . . .

Edit: Please someone do a screenshot picture with article and upload to here, so that in case one of the pages suddenly "go missing" . . .
I only found this because it's already being spread about by many others.
Last edited by HonestlyNow on Wed Apr 08, 2020 11:09 pm, edited 2 times in total.
Top 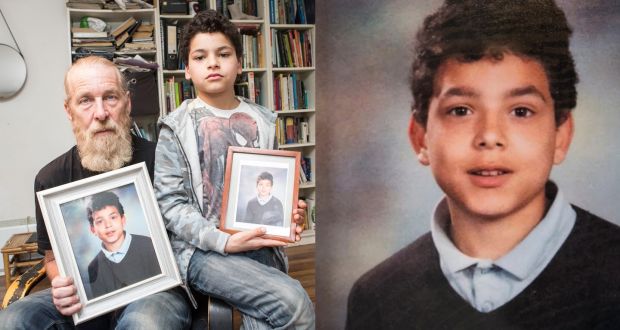 Edit : Google image search has them both as Conor Wilmot
https://www.google.com/search?tbs=sbi:A ... QAdiLNB47A

Please, can another member here screenshot, save and upload these two articles . . .

Thank you for pointing this out—quite fascinating.

You do not have the required permissions to view the files attached to this post.
scs

Thank you for pointing this out—quite fascinating.

You beat me to it SCS!

I just finished saving those pages to the server and then saw you had already posted them.

And yet the article is still posted on the Internet.

Amelia also posts on this same page a 6-minute audio of an "exhausted and broken" NHS nurse. She states she's been a nurse for 29 years.

Excerpt, in the context of providing an analogy for time of exposure —

And yet the article is still posted on the Internet.

Amelia also posts on this same page a 6-minute audio of an "exhausted and broken" NHS nurse. She states she's been a nurse for 29 years.

Excerpt, in the context of providing an analogy for time of exposure —

OgeneAfrican news site from Johannesburg also has this article with the boy's photo. It is also dated the 1st of April.