It has taken less than 10 years to pry open the can of worms enshrouding the pathetic 9/11 scam. The central role of the major newsmedia corporations to pull off this sordid "terror" simulation has now been comprehensively exposed. Before joining this forum, please get familiar with the research at: http://www.septemberclues.info
Post Reply
First unread post • 14 posts • Page 1 of 1 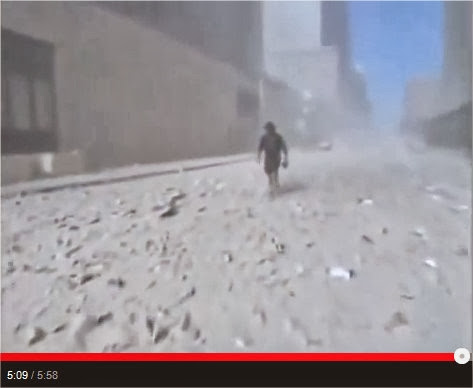 Just came across this video yesterday. New footage after more than 20 years

Oh my gosh - they really, really suck at putting together those audio tracks. They STILL haven't learned how to make a credible audio track!

Yes, the plane at 2:10 into the vid is terrifying!

At 1:50 the camera is facing away from the north tower towards the crowd and sky behind the cameraman. The smoke trail in the sky helps establish the position of things. There is no plane in sight. Without any edits, the camera swings back to the smoldering tower, then pans around slowly and HOLY HELL! A 767 is in the air out of nowhere cruising at 500 mph towards the south tower. How lucky he caught it. A ghost ship!

Between 1:50 and 1:52 the camera was pointing almost exactly where the plane would have been, given its trajectory and speed we see 13 seconds later at 2:05

Also after the plane shows up there is only one voice from the jittery crowd of onlookers that mentions anything about an airplane. All the other noise is like 'omg' and 'what's happening'. But this one fellow has a voice that sounds dubbed in, and he says, of all things, "it was a united airplane that just crashed right into it". That's the only audio mention of a plane in this thing that I heard. Really weird. In such a moment would one calmly note that it was a united airlines airplane? Maybe only if you'd shorted their stock the previous week

Also also, you'd think the owner of this video would have sold this baby for a few bucks at some point instead of saying "I shared it on youtube but didn't know i had it set to private for 20 years".
Top
Post Reply
14 posts • Page 1 of 1