It has taken less than 10 years to pry open the can of worms enshrouding the pathetic 9/11 scam. The central role of the major newsmedia corporations to pull off this sordid "terror" simulation has now been comprehensively exposed. Before joining this forum, please get familiar with the research at: http://www.septemberclues.info
Post Reply
First unread post • 177 posts

How about : "hang CNN", folks? Or how about "kill the Media Bullshit"?

Compare buildings Z and Y in these 3 pictures: 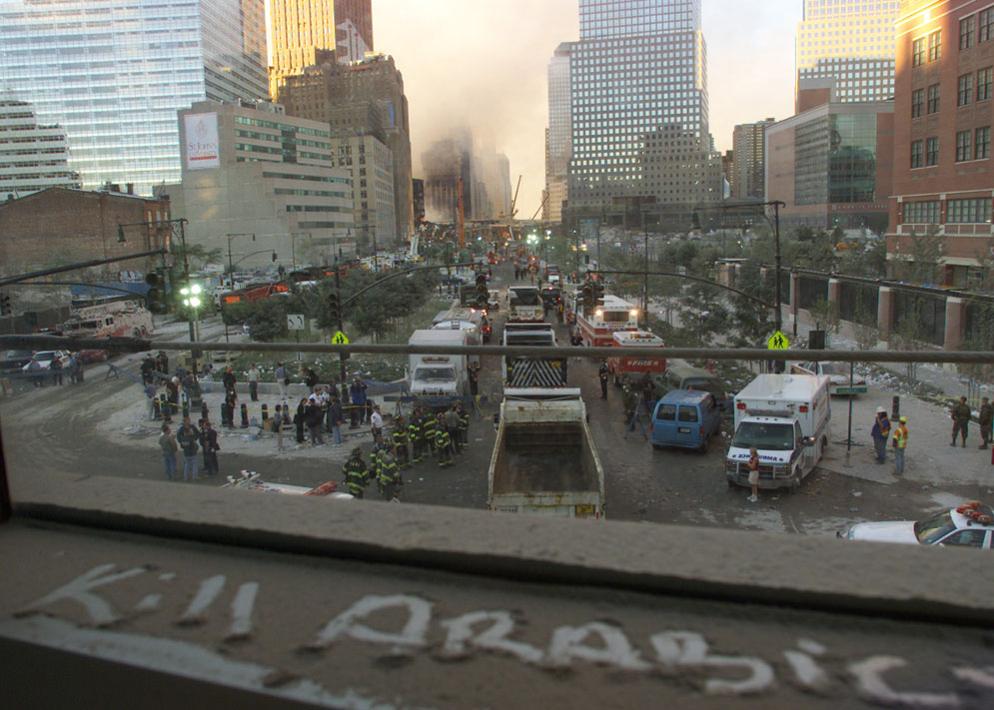 If it is still not clear to everyone just how utterly fraudulent the 9/11 imagery is - I fear some people have clarity problems...

Folks will not be advised to revisit the TV Archive as part of the 10 year remembrance, instead liberal helpings of newly created images of people looking on will be the order of the day!

cnn - replay [their pans and zoom] 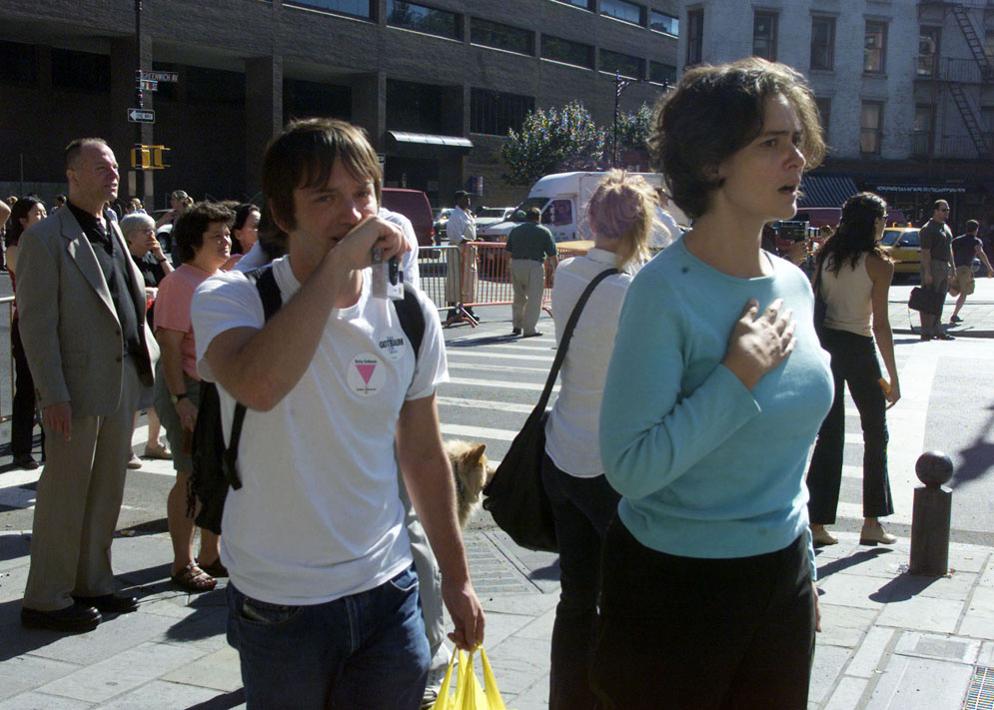 well spotted, I@N. Those human figures that stand with arms hanging next to their bodies are particularly creepy... and the guy running far in the back is a joke, with one of his legs being so up as to bump against his buttocks. Who runs like that?

To the people new to the idea of fakery, wondering why in the hell should pictures of people in the streets, without visible details of the events, be faked, consider that most likely the whole of downtown manhattan was sealed off and there were no "witnesses" at all. But the idea of the witnesses in the streets is crucial, and has to be enforced: precisely to ward off the thought of fakery. Of course, it is also important that no real person recognize itself in the pictures, so not to have the temptation to relate a personal account to the media.

The image in question is credited to "REUTERS/Peter Morgan", a name recently responsible for a number of probably faked pictures of the hurricane Irene aftermath...

I've been avoiding posting something in the Norway thread! Early on somebody posted a "video" walking towards the alleged blast scene, one of the shops they passed by was called Aldo, which tickled me.

Having cycled into two feet of water you would think that mongoloid man would have at least splashed his shorts!!

How does a car grill get completely ripped out from falling debris? Sorry guys but I build late model Mustangs and that just isn't gonna happen,the headlight lenses are secured by two metal push in rods, they have to be removed to take the assembly out, I don't care if a 2000lb block of concrete falls on it it's Not gonna look like that picture, that grill was removed by a human person, plus the side marker lense is incorrect for the car, the amber should be closest to the beginning of the drivers side front fender, so flip it around and tell me if that puzzle piece fits? and what's with the guy in the white shirt in the priest death shot laughing as he poses for the picture? kind of a strange behavior at that moment in time? And the other guy on the far left by himself looks fake?
Top


After ten years since the attacks of September 11th, CNN has released a video which remained unpublished until now. The movie shows the column of smoke originating from the impact of United Airlines Flight 93, the plane crashed in Pennsylvania, the only one not having reached the target of terrorists. In fact it was probably directed at Washington, the White House. Passengers, however, rebelled against the hijackers, depriving them of control and unable to prevent the plane hit the residence of the President, crashed near Shanksville. A local resident has taken up the cloud of smoke coming out from the impact, although it is clearly visible at least 20 km away. The amateur cameraman comments the scene astonished by linking it to the news that from some hours are shaking the world. In fact it's ten o'clock in the morning and the other planes have hit New York and the Pentagon: "The debris of a plane and the terrorist bomb that exploded (!!!!)- he says - I know nothing more, I only saw the smoke and the explosion rocked my house, up to now. Others crashed into the Pentagon and the World Trade Center, we are seeing on TV. And now this ...". The video was released by the family of the man, who died a few days ago, which is determined to remain anonymous

Wonder why that guy doesn't have a trace of a Pennsylvania accent. Must have been a recent transplant.
Yeah, that must be it.
Top

Shanksville is one of the Biggest scams in all of this Fiasco!
Top

brianv wrote:Folks will not be advised to revisit the TV Archive as part of the 10 year remembrance, instead liberal helpings of newly created images of people looking on will be the order of the day!

We had a good laugh about that once upon a time.

brianv wrote:Folks will not be advised to revisit the TV Archive as part of the 10 year remembrance, instead liberal helpings of newly created images of people looking on will be the order of the day!

We had a good laugh about that once upon a time.

And a another "new" video resurfaces for the happy 10th:

the shots of manhattan "from the ISS" aren't really new, I think. But there is a second part with actornaut "Frank Culbertson" on the ISS calling back on earth after 9/11 that is pretty priceless.

He plays the trumpet, on the ISS.

So we are expected to believe that a serious scientist would be allowed to bring the most noisy and deafening instrument aboard of a crammed space station where he was expected to live with other two individuals for months at a time. That's a fine choice. Imagine he playing "oh when the saints" for the 10th time while his two colleagues try to catch some vertical sleep.

How the decision was taken...?

I wonder how long the operation took to pull the trumpet out of his ass when he finally "landed back on earth".

In the third part we see the lying aged sod telling us how he was "blessed" to be in a "fantastic vantage point" at the moment of 9/11. Sure you were, sure.
Top

Sir Arthur Conan Doyle wrote of the dog that didn't bark in the night...

And just as well the Russians or Chinese didn't decide to invade on 9/11, the door was wide open. pResident Evil was on Walkabouts/Holoday, the Airforce was AWOL, Dick Cheney was in command at the Pentagram! Fuck it would have been a walkover!
Top

More footage by a so called "Clifton Cloud", watch between 13-14 seconds into the video under the dancing smoke. Video was uploaded yesterday. By the way Clifton is on the phone he doesn't sound too excited about what he saw

BNSF9647 wrote:More footage by a so called "Clifton Cloud", watch between 13-14 seconds into the video under the dancing smoke. Video was uploaded yesterday. By the way Clifton is on the phone he doesn't sound too excited about what he saw

Another zoom in on the airplane as it comes into view and impacts the building!
I wanna see one which doesn't have this zoom in!
Top
Post Reply
177 posts