It has taken less than 10 years to pry open the can of worms enshrouding the pathetic 9/11 scam. The central role of the major newsmedia corporations to pull off this sordid "terror" simulation has now been comprehensively exposed. Before joining this forum, please get familiar with the research at: http://www.septemberclues.info
Post Reply
First unread post • 512 posts

reel.deal wrote:EquinoX... this was a PM but you got PM blocked, so putting this here, hope you dig !

Lovin' the video deception thread you got going on LetsRoll, props to ya dude!
I have an addition that i would love to see Matt (911ConspiracyTV / 911CTV)
try and talk his way out of !!!

Ask him to make another youtube debunk-vid out of this one ! ...hahaha !!!

from a German Documentary that examines OBVIOUS BLATANT "LIVE" 9/11 CGI-NY, on CNN...
originally linked on RealityShack by Lyrix...
I made the gif... this is killer !!!
GAME OVER !!!

Reel, I had a break from 9/11 but I’m back. I was just to busy with my own life… But I never ever gave up on this… And now my break is finished, More enthused than ever and I can function a whole heap better on this now. I only have noticed this post addressed to me back just under 1 year ago to date.

Yes this, find is killa! Nice work playa!
It’s a real great find. And I am going to reference and also mirror what I see you are demonstrating.

Of course it has to be CGI 100%. I could delve deeper into this monstrous forgery. But the principles and parameters of this find are quite evident.

So as there in an apparent zoom out in the CNN footage. An observation is made @ aprox... @ 3.06 a static glitch of indefinite duration makes a Visual physical appearance. At the bottom of the Zoom out.

The observation to make to determine the hypothesis that this is actually computer generated imagery. Is the fact that whilst the bottom section of the actual shot has paused and no longer working. The actual concurrent zoom (reverse) is still taking place. Whilst this is concurrently occurring the actual picture is remains static.

Static visual computer generated composites are simplistic in making, and a glitch can quite often occur, proving the fraud of the computer generated imagery. Quite often Hollywood fake camera zoom- in are used to attribute a real life scenario to the fake computer generated composite.
In the CNN a zoom out is taken place, as the actual shot is view of the shot is moving backwards in concurrence with the zoom.
However it is observed that the glitch occurs at the bottom of the screen. But in stead of the glitch canceling the shot all together. The Actually Zoom out continues actually zooming out on the glitch.
This does defiantly not make and sense of a real camera as the reverse zoom and the visual aspect of the shot would be working in sync considering the alleged shot would have been live.
A further zoom back of the glitch does not make any logical sense and a conclusion that actual footage is not real world but is instead computer generated imagery, obviously prefabricated at an earlier point in time and being shown live on TV as a current real world visual recording.

REEL and Simon (n others) please keep on contributing great amazing finds such as these. I will archive and put them to good use.

In the gif above that ree-deal posted you can see a clear horizontal line just below and to the left of the radio tower as it zooms out in the smoke.
Top 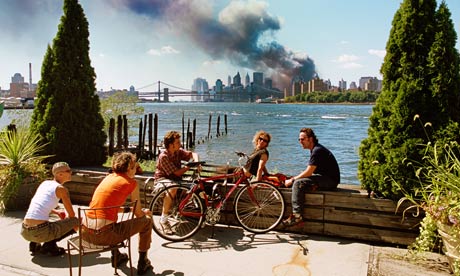 Lol, what a clusterfuck of an image.

The compositional prowess on this thing is off the hook!
Top

Human wrote:In the gif above that ree-deal posted you can see a clear horizontal line just below and to the left of the radio tower as it zooms out in the smoke.

Excuse me for not entirly understanding. Can you be a bit more specific and detailed as to what you are referring to? Is there something that is more easy to see in reels gif and not so easy in to observe in mine? I just wan't to make sure I an taking this find in it's entirety.

Hello Equinox
In reel-deal's gif just as it is zooming out and comes to a stop you can see a horizontal "line" if you will just below the top of the radio tower on the wtc building similar to the horizontal line Simon points out on his photo a few post's above, in his photo he shows the horizontal line to the left of the tower and has blue question marks next to it. I see the same type of "line" on Reel-Deal's gif and wonder if you can see the same thing? it is visible just as the zoom out stops and kind of separates the thick black smoke, let me know if you can see this as well.

I have no idea how to capture a frame and post it here or create arrows to show exactly what I mean, if any of you can tell me how to do this it would be greatly appreciated and would help me in the future to show things better, maybe someone can tell me how in a private message so as not to stear away from these post's?


ADMIN NOTICE: Equinox has put together a useful little tutorial and posted it over here: http://www.cluesforum.info/viewtopic.ph ... 7#p2366117
Top

All cyclists know that a bike is stable when its back wheel is against a wall, but isn't stable when only the front wheel touches a wall. Not likely to be leaning against the guy's knee, either, since that would be uncomfortable quickly - and if the guy moved his knee the bike would fall. Was the bike shooped?
Top

Was the bike shopped

Judging by the none existant shadow from the chair I would say probably, the bike maybe leaning on it's stand though.
Top

Was the bike shopped?

Judging by the none existant shadow from the chair I would say probably, the bike maybe leaning on it's stand though.

If you copy it and zoom in, it looks like the gears are leaning on the bench.
Top

Guy on mobile-- "Hey honey, yes we got knocked of work early today. Something about an explosion or something... hey honey did my Sports Illustrated copy arrive in the mail today? So i will be home soon babe. Oh by the way don't forget to set the TEBO to record Greys Anatomy this evening and record what happens to Grey at the hospital tonight. Im really looking fowared to this episode... been waiting all week. "

Guy on mobile-- "Hey honey, yes we got knocked of work early today. Something about an explosion or something... hey honey did my Sports Illustrated copy arrive in the mail today? So i will be home soon babe. Oh by the way don't forget to set the TEBO to record Greys Anatomy this evening and record what happens to Grey at the hospital tonight. Im really looking fowared to this episode... been waiting all week. "

"... honey, I have to warn you, my left arm was severed. Some nice surgeon er janitor reattached it. He told me to keep looking straight ahead, and whatever I do, to not look at my arm. It kinda tickles though."

And the guy center green shirt looks like Larry David from Seinfeld and Curb Your Enthusiasm!

I'm actually having trouble locating the guys (guy behind the bike) left leg. It appears completely obscured by tin bike bars. The bench isn't long enough for his leg to be completely streched out on it, and if it was bent like the right it would have been on the floor and not hanging in mid air. Is he sitting on it? Not sure...