The trees themselves look different

I kept this front and back page of the New Zealand Herald special "Midday Update Edition" from September 12 (Sept 11) 2001, and rediscovered it last night in my file.

I always found it odd that the NZ Herald was able to mobilize its entire staff (it is New Zealand’s largest news paper) after the second [????] hit the south tower at 12:03am on Sept 12th, convincing all its workers to stay on for another entire run of a second paper for a midday edition.

How could they have made the call so early on? How could they be sure that this event would warrant the first ever double print and midday edition the NZ Herald's history?

All the images, article, diagrams had to be written and proofed and edited, printed then distributed to every news vender in THE COUNTRY by midday on Sept 12th? All within less than 11 hours - that is a big job, especially concidering that they would have been still working on the morning edition aswell.

Looking at the images I have scanned in below, you will see more than just a few obvious clues that could point to the NZ Herald having received these images and their various instructions BEFORE the event.

The photos on the back page are ones I haven't seen anywhere else and it doesn't take much to see why.
More of those magic cameras that can focus on perfectly on foreground, middle and background all at the same time, more shocking rendering of windows and more "witnesses" looking in the wrong direction.

I haven't gone through to compare the front page screen shot with other footage yet but I am confused by the shadows and lack of background - as per.

Here is a photo I took a couple days ago from the same location (now a 9/11 memorial) as the newspaper shot: **my friend is the blanked out part**

And here is the magic camera and the very narrow Hudson

What are those people looking at over to the left?

And how about another classic Pentagon shot with the foreground bushes, Lloyd England's Taxi and the steps(?) on the Pentagon roof all in perfect focus:

And what newspaper article would have been complete without the terrifying images of people flying down the side of the building:

Here is the direct link to the pics: http://img580.imageshack.us/g/herald9118.jpg/ so you can go through in more detail

Hi,
I ve just red Simon s introduction on the research, for the newcomers.
It s a brilliant example in concision: Bravissimo !

I too had some "bad encounters" on u-tube.
Most where most certainly plain "victims" but non the less, agents of "contagion".
Low brainers,incapable to face the facts (they where fooled) mostly ...

There is one worth mentionning as a dangerous intoxicant (knowingly or not):
U-tube channel: ALAWSON911
I leave it to the administrators to evaluate the relevance of updating the list or not.
(Hey! Just found a name for corrupt gov institutions: Adminis-traitors ! I know ...)

Just one more thing:
I hope this forum will keep an informational dimension,will keep being an eye openner;
It s David vs Goliath out there !

This seemed to be a common theme throughout the world, very soon after the towers fell news sources had all these elaborate computer graphic images of what happened, how Bin Laden was the mastermind etc.. VERY Convenient cover stories, Hell we all know about the BBC broadcasting the tower had collapsed when it was still intact in the video behind the reporter!!
Same thing happened to Oswald, within an hour all his Russian Defector propaganda was force fed down America's throat!!
Top

There was also the window of 'response time' the government had to any doubts we had about their official story - a response time to monitor alternative theories, put their pre-paid disinfo agents to work and get everybody herded into one or another pet theory for them to control. If nobody had said anything, we would've only had one 'no-planer' hired to be the bonkers guy.

The more radical the doubt, the more insane and anti-social the disinfo agents like Nico Haupt were meant to act. It's a simple ratio to observe, actually. The more these agents had to doubt the official story and herd people, the more 'mad' and underfunded they had to be. Alex Jones tows the non-existent airplanes and vicsims so he gets top billing in the Tea Party and alternative radio events.

I liked Bats' little clipping. If the newspaper you make graphics for had been informed ahead of time about the attacks but you were not given full details from your boss's boss, you might make a strange graphic like this - wherein the "first plane" story collides into the wrong "tower face" story hahaha - and the screwy timelines had begun!

Not sure if this has been posted. I cant see how anything could cause this type of shadow....so yea
Top

*
Yes, Celtic - am quite familiar with that shot (from the "Evan Fairbanks" vantage point).

What is it? My best guess:

A glitch in the imaging software - a bit like this one : (Unless it's an odd air-conditioner or a fancy external elevator? Any New Yorker on board?)
Top

Simon, please permit me to analyse your previous image. In fact, it is not a glitch, just very bad rendering.

I have located the buildings in question, including the building from where the alleged footage was taken. Below is an overview of the entire area from Bing:

Here is the best match I could find in Google Earth - it's clear that the rendering hasn't improved much since 2001.

Here's what the building really looks like and where the alleged footage was shot from. I have made some notes to the side after a cursory comparison with the rendered version of Manhattan from Simon's post. 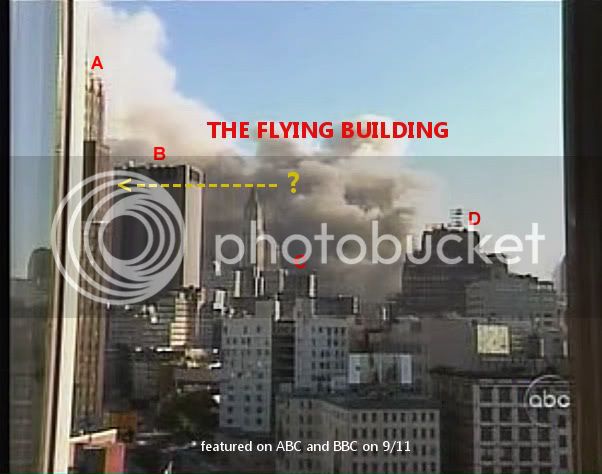 I would also like to point out that the white building partially obscuring building D can be seen on the overview image on the corner of Beach St and Varick St. It's also evident in the google earth image and, in my opinion, could not obscure building D as shown.

And finally, buildings marked B,C & D are all on the same plane (ie:Justice John M Harlan Way - an extension of Worth St, where much of the "amateur" footage was shot) 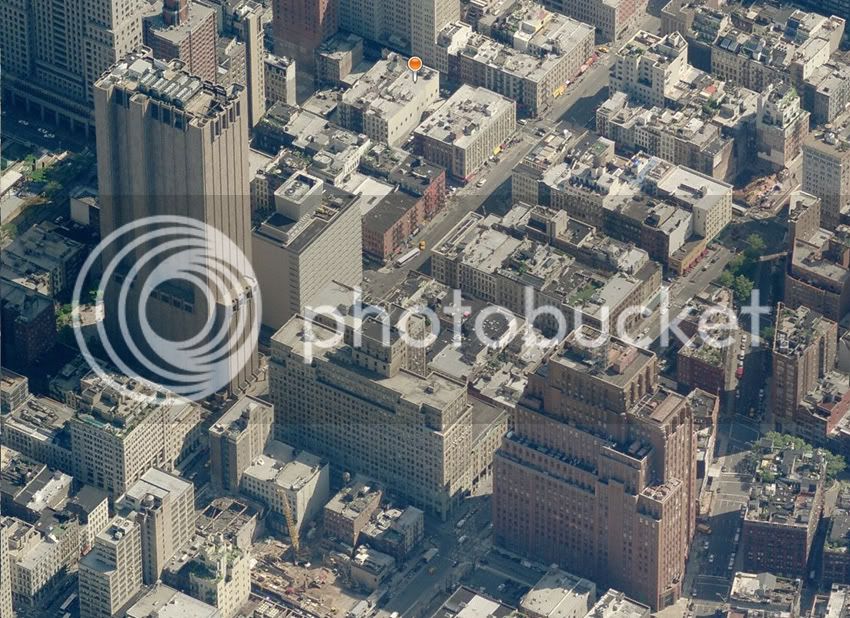 Now, to my untrained eye, I would say that building D is behind building C on the rendered version.

In the ABC shot, it looks like the smoke is too small for what it's supposed to represent - as if they put smoke that belongs to a bonfire and pasted it into a Google map with daylight simulation. The Google Earth technology really isn't worse than the 9/11 broadcasts - in fact, if you got a more realistic texture/light renderer like an advanced Houdini (http://www.sidefx.com/docs/houdini11.0/news/9/render) you could feasibly turn Google Earth itself into something that looks like the 9/11 software they might have used at times.

If Sony pictures had a full 3D model of Manhattan for Spider-Man that they'd developed over seven years and completed in - say - 1999, and these military folks had more powerful computers than the average consumer (cough) then it would be pretty easy to make this 3D scene.

You could even remove layers of buildings, render 2D "portraits" of rows of buildings at a time, and then shove those layers into an editing program to get things really going smoothly and rendering quickly. If they used all these techniques, plus a crypto software to make details "odd" like the interviews with live morphing face parts and blurred facial features, you could conceivably end up with something very much like all the morning broadcast and amateur videos they are passing as "eye-witness video".

Then, if you block the chance amateur videographer (I don't think there would have been many in the first place based solely on the average New Yorker's attention span) with some EMP fucker-upper thing like HERF, boy you could really create all the imagery of that day yourself and nobody would have any imagery with which to combat your version of events.

Then you could spend the next ten years or more releasing the videos bit by bit and claim that you were releasing them to the public as you received them - even though you really had about 900 of the videos in stock the whole time.

But nobody would ever do that - even to create profitable wars and limit civil liberties for enormous personal benefits. It would never work. People like us would find out that it happened and nobody would believe us at first, but then eventually they would see that we're right and the perps' whole plan would fall apart and the FBI and CIA and government's reputation would be irreparably damaged in the public's eye. Why would they want to do that to themselves? It doesn't make sense.
Top

In my mind, there's no doubt that they TRIED as hard as they could - using their best available technology - to create a decently realistic-looking Manhattan scenery. This has, of course, worked out quite nicely for them insofar as their plan was to fool the vast majority of the world's population. Our thankless task here is to expose the little flaws in their immensely well-funded operation. As it is, we have already done that: the most macroscopic blunders have been roundly exposed. Yet, as we now tackle the fake Manhattan scenery, we must focus on the most clear-cut signs of fraudulent photography. And at times, this means looking at apparently 'minor' details. Now, we all know that details are never lost in a real photograph. To be sure, a modern camera does not lie: it captures reliably every single detail of a given scenery. For instance, if you snap a picture of your own house, you will never expect to see one of your house windows missing due to any kind of defect of your lens or camera...

Yet, here we have two samples of 9/11 imagery which feature precisely such aberrations. I have compared two current Google Street Views (which I assume are real and reliable) with two 9/11 shots aired on the ABC TV network: You may still say : "Hey, perhaps those 2 windows were punched out AFTER September 11, 2001". Yeah, you are quite free to say so. However, it is up to you to embrace and believe such a thought. Perhaps some office in New York keeps the files of all NY building modifications? Let's check it out.