DEENA BURNETT interviewed about her book, "Fighting Back"...


Do you think that is an indication of the way the media often turns to either celebrities or those perceived to be victims -- real or perceived -- and gives them a kind of special status?

Deena Burnett: Yes, that's a good way of saying it. I've been very surprised how people will call 9/11 family members "celebrities." It's only happened to me once or twice, but it feels very strange, because it's a different situation. It's not a situation where we went seeking the attention. It goes back to being cast in that role that I never expected to play. Actors and actresses intend to become celebrities; they intend to be in the spot light and to be asked the questions, to be seen as someone who is an authority on the issue of the day, and I think they enjoy being in that role because that was their intention to begin with.

"The State Board of Election Commissioners is made up of unelected individuals
that work together in order to prevent fraud and abuse during election cycles."
http://arkansasgopwing.blogspot.com/200 ... to-ar.html 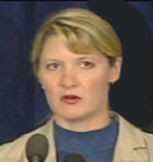 How reassuring, huh?...Deena will make sure that your vote counts ! :D
http://www.septemberclues.info
Top

"I read a lot of books, tried to find a child psychologist, but they wouldn’t see children under the age of seven. I stayed in touch with my pediatrician and my priest and I searched the Internet for answers, but most of all, I listened intently to my kids and told them I loved them,” said Burnett. “On faith and prayer, you can always do what you need to do.”

Toward the end of her talk, Burnett shared a conversation with Tom that she believes was a moment of grace from God.

“For about a year before he died, Tom began to attend Mass during his lunch breaks. He told me he felt like God was trying to tell him something, like he had a message for him. All he knew was that it was going to impact a great many people and it would involve the White House,” she said.
Top

Is it just me or does Deena remind anyone else of Lori Haskell.......same demeanor, countenance, shifty eyes, etc....? Grads of the same acting school by chance?
Top

Yes, Osmosis - quite so...Wonder when Deena and all of the 9/11 actors will start registering here and defending their good faith?... it took Dori Haskell only 3 days or so.

THE 9/11 HOAX: PONDERING QUESTIONS OF STRATEGY AND OPPORTUNITY
by Simon Shack - January 11, 2010


One question which naturally emerges from the study of the 9/11 memorials is : “Even if many ‘victims’ identities appear to be entirely made up by a computer database, could it still mean that a number of real people were killed on 9/11?"

If we are to apply a logical thought-process to this particular issue, we need to look at questions of strategy and opportunity which the perpetrators must have prefigured. Surely, any sensible investigation must start by defining the type of crime that is being investigated. By defining the scope and the objectives of the crime, we should be able to rule out what the perpetrators themselves would have ruled out, in terms of unnecessary risks and liabilites. Was 9/11 designed as a barbaric murdering spree or was it more of a gigantic bank robbery? Let us make an’ educated guess’ and say that the latter is the case.

Bank robberies are considered terrible failures by the robbers themselves in the event of any bystander, guard/police officer getting killed; the sole objective of a bank assault is that of stealing money ? never that of commiting murder. The penal aggravations of manslaughter is most unwelcome to any professional gangster ? a grave mistake to be carefully avoided.
To be sure, there was no ‘added-value’ for the 9/11 perpetrators to commit a mass murder of some 3,000, mostly white-collar professionals. As we have seen, a large amount of alleged “victims” appear to be mock-up identities. Of course, precisely how many remains to be verified. Yet, consider this: if 300 deposit-boxes are emptied by a gang of bank robbers and fingerprints are found in just thirty boxes, would they be suspected only for robbing those thirty? Or would a court of law assume that they also robbed the other 270?

The idea that nobody was killed on 9/11 is, usually and predictably, rejected offhand by many folks as ‘outrageous’ or ‘unbelievable’. Others will accept that some simulation took place - but that a number of real people must have died. So let us imagine an ’intermediate’ scenario of, say, 1000 people being killed that day. If this were true, an immediate problem emerges: what if those 1000 families, at some stage, discovered that the other 2000 families were untraceable/non-existent? It is quite unlikely that the 9/11 planners would have run the risk of such a dire, worst-case scenario: Imagine a horde of angry families filing an avalanche of executive court orders, all demanding access to public records and official verifications! Truly a recipe for disaster? Surely, the 9/11 plotters didn’t want any of that? Thus, we may reasonably assume that every precaution was taken to ensure that NO civilian lawsuits might ‘spoil the show’; in all logic, the assassination of any number of people on 9/11 was a definite no-no, a stupid and senseless aggravation to be avoided at all costs. The chief directive of the Grand 9/11 Deception plan may well have been: “Zero casualties”.


“TOO MANY” PEOPLE INVOLVED ?

The almost unlimited resources of the 9/11 planners allowed for a multifaceted simulation which certainly involved a great many people by any conspiracy standards ? only a few of which needed to be fully briefed about all details of the plan. A recurring objection skeptics keep raising is that “too many people had to be involved, therefore it would have been impossible to keep them all quiet.” Not so. Allow me to set forth a brief personal perspective on this issue: As the son of an idealist Norwegian sociologist who pluckily ‘fought’ the Sicilian Mafia with a typewriter, I often like to remind people of the concept of “omert?”; in Sicily, tens of thousands of honest citizens know perfectly well the names and whereabouts of the Mafia bosses ? yet they are kept silent for decades with bribes and fear. Historically ? and this is a nigh but undeniable fact - cold cash and hot threats have never failed to put a lid on people’s mouths.

A limited number of people were needed to pull off the 9/11 hoax ? a hoax which relied on an incalculably larger budget than any smalltown Mafia hit. Needless to say, the US executive branch also firmly controls all key government-appointed agencies, an asset no criminal organization could ever dream of. Most importantly, every single major news corporation has been, in the last 50 years or so, thoroughly infiltrated and co-opted by the higher echelons of power. Today, their globalized monopoly of world news makes them the single most powerful persuasion-machine ever known to mankind. In fact, their unchallenged control of information was a crucial player in the 9/11 plan: Most lower-level operatives involved in the execution of the plan were induced - much as the average ‘Joe Public’ - to believe in the televised version of the events.

1: It is effectively disproved by historical precedents.
2: It does not account for the wide, unprecedented range of assets available to the 9/11 planners.
http://www.septemberclues.info
Top

DEENA BURNETT interviewed about her book, "Fighting Back"...

About the cockpit voice recorder : " They had a transcript on the wall that we were able to see and read in sequence with hearing the audio ... for the first time in months I knew exactly what had happened by hearing the sounds and being able to visualize [??] what he experienced." I would be curious to get a comment from NTSB/AAIB/BEA specialists on this statement ...
Everything might not be faked ...
Top

Very well-written, and convincing, Simon. Please archive this new essay on septemberclues.info so I can locate it in the future to forward to people.
Top

Nice essay Simon, coincides well with today being the 100th month anniversary of 9/11.

I had a recent chat with a 9/11 truther who scoffed at the thought, of the footage of the people waving from the buildings also being faked.

But he actually started to awaken when I explained about the compensation fund averaging 1.5mill. per victim. Multiplied by 3,000 = 4.5B. a nice little earner for the perps from the tax payer.
Top

fbenario 4 Jan 11 2010, 01:13 AM wrote: Very well-written, and convincing, Simon. Please archive this new essay on septemberclues.info so I can locate it in the future to forward to people.

Interesting read; I don't believe much I see in the media and after reading some of this forum I better think it out again!
Top

HOLD THE LINE AT 'FAKE PLANE' AT ALL COSTS!

At the end of 2008 the September 11 terrorists in the Military/Media/Financial
complex realized that their entire September 11 simulation operation was on
the verge of being blown wide open.

In a move of desperation, they decided to sacrifice some of their deep cover
agents and attempt to create division within the "TV Fakery" / "No Planes"
communities.

The Pump It Out forum was born, and Ace Baker was "killed off" in a highly public
staged "suicide" live radio broadcast on Jim Fetzer's show.

Knowing what we know now thanks to research from Hoi Polloi, BrianV,
MirandP, OzzybinOswald, Joe Craine, Still Diggin, Simon Shack, and other
posters on this forum, the infiltration post below takes on special significance.

Perhaps the only reason that the Perp forum even exists was to try to keep
knowledge of the 9/11 actors, vicsims, and simulation technology
under wraps. The goals of the terrorists' infiltration and disinformation operations in 2009 were to:

--Discredit all research pointing to the simulation technology used on 9-11.
--Create the illusion of endless infighting and bickering amongst popular researchers
--Sacrifice the prominent 'no-planers' (Jesus Shayler, Moon-base Lear, etc)
--Shut down major forums and channels (911movement takedown / blackmail)
--Intimidate individual researchers through FBI visits, public exposure, and blackmail
--Shunt all no-planes supporters into a 'online petting zoo' at PumpItOut by rallying around the most charismatic infiltrator in their stable
--Protect their undiscovered "victim family witness" actors/agents in the field (Mark Humphrey, Jersey Girls, etc.)

I would say that their activities were a resounding failure, and that as knowledge of the simulation spreads like wildfire across the internet, the odds of their being able to maintain the hoax through 2010 are low.

Will a whole cast of fake family members and witnesses go into soap-opera retirement in 2010 as the flesh-and-blood actors refuse to carry out their mission because the job has become too dangerous?

In 2009 the shills tried killing themselves on live radio and pretending that planes crashed into their houses.

Perhaps in 2010 the remaining fakes will succumb to influenza, get beheaded by Yemeni underwear bombers, drop into comas, or be run over by taxi-cabs.
Top

I encourage all members to read Fred's posts above (on page 21 of this thread) - because they're pretty much RIGHT on the money.
http://www.septemberclues.info
Top

I agree......Fred is the most entertaining/knowledgeable member of any forum around!
Top
Locked
1210 posts