She is, here she's talking about it: http://www.history.com/videos/caroline-dries-on-911
Top

During the video an instrumental version of the BeeGee's "How Deep Is Your Love" starts to play. One of the lyrics in this song is "you're my Savior when I fall".
Top Yep, as I've said repeatedly, even a single faked image/video means The Event, as described by the media, DID NOT OCCUR. PERIOD.
Top

Just for the record:

Binladen's name was actually provided to us 41seconds after the 2nd "strike" - which is roughly 18minutes after the 1st "strike" (not 45min).

As one who estimated that one of the featured jumpers in your montage was 8' tall in an earlier post in this thread, I have to say I just love this GIF RD!

This goes straight into our collection of slam-dunk proof of 9/11 image fakery.

Does any photographic wiz wish to challenge this? Is anyone going to bring up "focal distortion" issues here? Let's hear from you!
Top

2003 release? Kind of close to the main event, I mean for 'reverence and respect' purposes (though I suppose 18months-2yrs might be the standard Hollywood sequel release lag-time...)

But from your last link...am I being taken in by this, surely this is parody? Subjective message broadcasting... is that the overt equivalent of subliminal messaging? Is this a gamers' RPG equivalent of 'Brass Eye'?

This title is used by the following domains:
Politics
Audience I've never seen these ones, rd, where do they come from? Are both of them from 1993?
Top

FYI - it is common practice in Hollywood when a distant group of people is to be represented, such as spectators at a sporting event, to use lots of 2D cutouts with real extras interspersed amongst them. The cutouts are life-sized enlarged photos of real people. The real extras amongst them add motion to the scene and complete the illusion. There are agencies that provide these cutouts for movie productions. The effect works surprisingly well as it's hard to tell a life size photo of a person from a real person at a distance. They've been used in many movies that you've probably seen without noticing. It also saves lots of money on pay and meals for extras.
Top

These 93 fakes are horrendous! I think it is slowly becoming clear that 93 was not only the precursor to 9/11, but a trail run for some of the fakery!

I confess that I don't know the composition of the WTC glass, but I would be surprised if it was less than 10mm thick and either laminated or toughened (which shatters to safe particles when impacted).

Whatever the composition, one would expect to see the suspended ceiling panels through the holes rather than the "black" caused by the eraser tool in Photoshop! 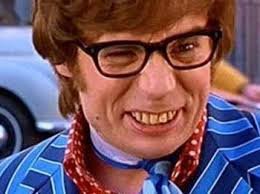 hey Reel or (anyone)
have you done a post on this falling image accredited to Allan Tannenbaum ? Much help would be appreciated

This image is impossible - for one simple reason:

THICK SMOKE WAS SEEN GUSHING OUT OF THIS GASH FOR THE ENTIRE DURATION OF THE MORNING ! Therefore, the above image is impossible. And so is the below image:
THERE IS HARDLY ANY SMOKE TO BE SEEN AT ALL!!! 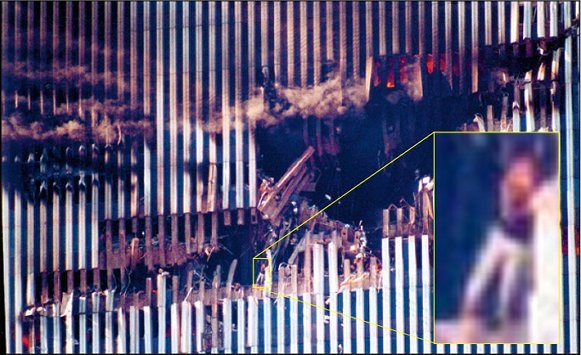 In fact, this may be one of the worst cock-ups by the "9/11 IMAGE FAKERY FACTORY" ! As they decided to release (at some later stage) these close-up images of the gash (with people seen standing in it!), they completely forgot about the fact that the 9/11 TV imagery showed, uninterruptedly, thick smoke gushing out of the gash...

for the entire duration of their 102-MINUTE made-for-TV Hollywood movie!!!