Reminds me of that childhood game 'Guess Who?' in which a bunch of fictional people were developed for use in a grid. These 9/11 "vicsims in danger" creators must have had a blast placing their sims in all sorts of precarious situations. I wonder if we could zoom in on their original software if their people would look like cartoon characters? Would they even have faces or are they just FMV (full motion video) captures like those video games from the 90's with actors inserted into 'wild west' scenarios, etc.? 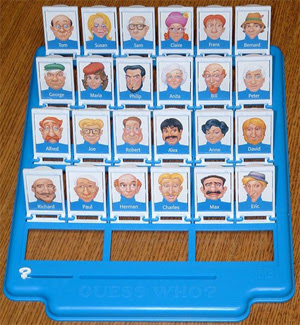 Let's say you have some of these sim heads sitting on FMV bodies waving and gesticulating like madmen; you just ramp up the framerate to video-game level of 60 fps, render a huge screen of these cartoon folks, then shrink it in an editor and add some 'atmospheric' effect like a mirage-y wavy heat thing goin' on and presto-bango you could make any number of little waving figures panicking about their sim-tuation.
Top

Even if these are amateur folks like you and me dinking around in photoshop, there's no telling how such things were "enhanced" beyond the original digital evidence.

Remember my cautioning against flagrant photoshopping and re-contextualizing of the original digital fakery?

We walk a fine line by assuming everyone knows what images we are talking about ... even in this digital age where something can be multiplied a million times with hardly an effort. Be careful, please. And remember to try to post the "ORIGINAL" images (if there were any) instead of edited and re-edited ones. If it can be helped, that should be our goal.

This site is obscure enough as it is; we don't need to create a confusion between what researchers are doing and what the 9/11 perps created. Otherwise, we just end up critiquing each other. Know what I mean?

I'm with Simon. KEEP IT SIMPLE. And if you are going to post edited versions, edit them YOURSELF please so we are not dragging unheard of code names, aliases and anonymous folks onto the site like in this image. Just some advice to keep our research cogent. I bow out, now. Sorry to interrupt.
Top

Plenty of nice pictures above! I especially like the smoke added seeping out from ... holes ... in the structure? I wonder how the smoke arrived from inside?
Anyway, the $ 1 000 000:- question is, apart from all smoke added, if anything can 'collapse' from top ... down ... by gravity ... through itself ... etc, etc. http://heiwaco.tripod.com/chall.htm !
Does smoke make buildings collapse?
Fill your house with smoke ... and the roof drops?
Top

The tower collapses are CGI!
Top

reel.deal wrote:[Brutal, couldnt agree with you more when you pointed out the thousands of facemasks doing the rounds instantly. Perhaps every
extra got handed one along with a stamp on their hand as admitted into the 'psyop cordon-zone'. Practically every other 'witness'
was rocking the whole collection from disposable paper thru to industrial-strength industry standard. Or maybe thousands of
downtown NYC graffiti-writers got jacked for their facemasks the night before. Its funny how all the crowds magically conjured
up the facemasks, its even more strange they would care about breathing. Cos here's the kicker... breathing didnt seem to
matter to any jumpers whatsoever.

Thanks reel.deal, yeah the face masks are surely strange!
Top

The Bridge is an amazing film - you'd think it would be depressing in the extreme but oddly it's not somehow. Highly recommended.
Top

Is the whole movie "The Bridge" supposed to be real?

I always like when smoke pours out of undamaged windows indicating it is just pasted on ... the outside. Thus a fake picture from a fake video.

Heiwa wrote:I always like when smoke pours out of undamaged windows indicating it is just pasted on ... the outside. Thus a fake picture from a fake video.

I'm not sure but, I guess you were able to open these windows?
Top

Heiwa wrote:I always like when smoke pours out of undamaged windows indicating it is just pasted on ... the outside. Thus a fake picture from a fake video.

I'm not sure but, I guess you were able to open these windows?

Easier just to paste the white smoke on the outside. The picture/video is stupid fakery.
Top

I saw this "jumper" picture recently and was slightly unsettled because it reminded me so much of a tarot card I've seen before:

So I decided to look into the meaning of said card and this is what I found:

A man hanging by one foot from a bar or tree. His free leg is always bent to form an inverted "4," his face is always peaceful, never suffering. Sometimes his hands are bound, sometimes they dangle. Sometimes coins fall out of his pockets or hands.

The Fool settles beneath a tree, intent on finding his spiritual self. There he stays for nine days, without eating, barely moving. People pass by him, animals, clouds, the wind, the rain, the stars, sun and moon. On the ninth day, with no conscious thought of why, he climbs the tree and dangles from a branch upside down like a child. For a moment, he surrenders all that he is, wants, knows or cares about. Coins fall from his pockets and as he gazes down on them - seeing them not as money but only as round bits of metal.

It seems to him that his perspective of the world has completely changed, as if his inverted position has allowed him to dangle between the mundane world and the spiritual world, able to see both. It is a dazzling moment, dreamlike yet crystal clear.

Timeless as this moment of clarity seems, he realizes that it will not last. Very soon, he must right himself, but when he does, things will be different. He will have to act on what he's learned. For now, however, he just hangs, weightless as if underwater, observing, absorbing, seeing.

Some readers believe the Hanged Man reflects the story of Odin who offered himself as a sacrifice in order to gain knowledge. Hanging from the world tree, wounded by a spear, given no bread or mead, he dangled for nine days. On the last day, he saw on the ground runes that had fallen from the tree, understood their meaning, and, coming down, scooped them up for his own. All knowledge is to be found in these runes.

Other readers like to point out that in older decks the card was known as "The Traitor," referring to the fact that, historically, some countries hung traitors upsidedown by one foot.

And still other readers like to point out that the Hanged Man is like that moment when a babe in the womb turns upside-down so that it may be born, hanging, as it were, from it's umbilical cord.

The Hanged Man is similar to all of these: like Odin, he allows himself to be hung so that he can gain wisdom for the world. Like traitors of old, be sacrifices himself for a cause, and sees things from an "inverted" perspective. What is right to him is wrong to others and vice versa. And like the babe in the womb, the Hanged Man hangs suspended between one world (the womb) and the next (outside the womb).

What is important to remember is that this is a card about suspension, not life or death. The querent might well feel that one thing has ended, yet the next has not begun, and they are stuck in a kind of waiting room. Things will continue on in a moment, but for now, they float, timeless.

Yet this isn't just a position of rest as the querent is inverted. Which means so is his/her view of the world is very different from the rest of us who walk upright. Thus, this waiting becomes a time of trial or meditation, selflessness, sacrifice, prophecy. This new way of seeing things often leads to insights and enlightenment. Answers that eluded the querent become clear, solutions to problems are found. All of which the Hanged Man hoped to buy with his sacrifice.

The first step into the esoteric, we might well say, is to shed the mundane world and be "reborn." To do this, we must surrender all we thought we knew, all resistance to new ways of thinking. We must make ourselves venerable to visions and psychic energies. We must, if you like, return to "the womb," a spiritual womb this time around. The one belonging to the High Priestess who, remember, sits at that still place between opposites.

This the Hanged Man does when he willingly allows himself to be suspended and dangle inverted from one leg. Neptune is spirituality, dreams and psychic abilities, and the Hanged Man has allowed himself to be lowered into those deep waters, floating there, absorbing all they offer him. He is waiting for that moment when he will be born into a new consciousness.

Thus, this card signifies a time when the querent is feeling sensitive, vulnerable, introverted, suspended even as they also experience insight so deep that for a moment, nothing but that insight exists. This is the card of vision quests but also, very simply, of those times when you put aside your prejudices and open yourself up to different ideas. Or just try something new and strange. Meaning that the Hanged Man could be as simple as going out with a type of person you never imagined dating, or trying some odd cuisine. It is a time when you change your perspective.

Such moments don't last, and they usually require some kind of sacrifice. Sacrifice of a belief or a wish, dream, hope, money, time or even selfhood. The sacrifice may be made to get into the inverted position, or it may be made to get out of the inverted position. Either way, in order to gain, you must give. Great or small, spiritual or mundane what you gain from making that sacrifice and allowing yourself to see things differently is insights and solutions. These can help you and everyone else you care about. Which is often why one goes through it all in the first place.

One thing is certain, once you have been the Hanged Man you never see things quite as you did before.

The point of this card seems to be that it symbolizes a radical shift in perspective. All that we heard after 9-11 was that "things will never be the same again" over and over. Just thought this was kind of interesting.
Top

Sadly 200 Million Americans will shed a tear when this goes Viral again in 2 weeks!
Top