If NASA faked the moon landings, does the agency have any credibility at all? Was the Space Shuttle program also a hoax? Is the International Space Station another one? Do not dismiss these hypotheses offhand. Check out our wider NASA research and make up your own mind about it all.
Post Reply
First unread post • 66 posts

Fascinating discussion. I know Jay Weidner has his downsides but I do find both of his Kubrick's Odyssey writings and films to be rather compelling and full of interesting information. Kubrick's Odyssey was the nail in the coffin for me on the Moon Hoax. Unfortunately, Weidner loses all credibility by saying we still went to the moon, but just faked the footage.

Either way, the film helped me connect a lot of dots regarding how Kubrick fit into things. It's a powerful tool in the arsenal for people who are open minded but can't do the fakery related research (for whatever reasons).

The theme and theories of the monolith in the second installment were convincing for me as well.
Top

One day to be associated in any way with the creation or the development of the space conquest narrative will mean to have reached the summum of ridicule.

lux wrote:BTW, I recommend getting a copy of the Dec 1966 issue of National Geographic and keeping it handy to show anyone who brings up the "reflectors on the moon proof" malarkey. I bought a copy on eBay for a few dollars. The magazine has an article about lasers which mentions that MIT has been bouncing them off the moon for years, obviously long before the Apollo Missions supposedly went there. And, just as obviously proves that you don't need a reflector to bounce lasers off the moon in the first place.

In fact the beam bounces off the ionosphere (whatever that really is) where ever you point at, not just at the part which has a light disk on it (called Moon)

"Project Diana, named for the Roman moon goddess Diana, was an experimental project of the US Army Signal Corps in 1946 to bounce radar signals off the Moon and receive the reflected signals."
https://en.wikipedia.org/wiki/Project_Diana

simonshack wrote: Lo and behold ! This is the almost exact same figure now commonly accepted (by NASA and all) as the escape velocity needed for an object to exit from our Earth's atmosphere! Yet, Jules Verne somehow calculated this figure back in 1865? Amazing !
...
Well, a far more likely, non-nonsense proposition would be that NASA simply 'stole' those figures from science-fiction writers such as Jules Verne - and adopted them as their own "scientific figures". As a matter of fact, we are told that Tsiolkovsky (the soviet rocket-scientist hailed as the "Father of Space travel") was the man who scientifically calculated this "11km/s" escape velocity speed needed for any object to escape our atmosphere. But hey, Tsiolkovsky (the rocket scientist) came up with this "11" figure almost half a century after Jules Verne (the sci-fi novelist) !

This is interesting, I didn't know Jules Verne gave that number in the 1865 book. But, at that time they should have been able to calculate it, as the mass of the earth and the big G should have been known, and the calculation involved simple newton equation. The wiki (https://en.wikipedia.org/wiki/Earth_mass) mentions the mass was known as early as 1737, and of course, the famous Cavendish experiment of 1798 (which no one ever repeated, not even today, although universities usually have the experiment in their labs, but "the technician is sick today", "the equipment just got broken", "so sorry guys, we can't perform it today",...)

Probably J Verne was imagining of a cannon ball style projectile reaching the Moon, and somebody calculated the (escape) speed for him, and later, when it was realized that rockets don't work in vacuum, they also accepted the story of the escape velocity.

Or for example, the tilt of the Earth is:

they definitely love the numbers games, which we don't see
Top

This might be the most explicit predictive hypno programming of the '50s era tell-u-vision reality creation machine. As a kid I used to watch "Lost in Space". How appropriate a title for what was about to be launched upon the gullible belief-programmed populace. Just listen to this 5 min trailer for the cutting-edge "Lost in Space" and you will have pretty much the exact model of NASA programming explained. I beg anyone to watch the current film "The Martian", then ask why the hollywood version is 10x more realistic and believable than the NASA shows we're subject to. I'm wondering if Ridley Scott is the new Stanley Kubrick in terms of reinforcing the public psyche.

To really understand what I'm saying, replace "Lost in Space" with "NASA" in this clip as you listen to the dialogue...

********
ps: I really wish I could find the missing first, 'educational' part of this priceless 50min movie. Please let me know if you find it.

The first half of the film is historical and educational in nature, depicting mostly the life and scientific contributions of Konstantin Tsiolkovsky, along with the basic principles of rocket propulsion, ballistics, and Space Flight. Also depicts the contributions of Max Valier and Robert Goddard.
http://en.wikipedia.org/wiki/Road_to_the_Stars

I had completely missed this post and thread of yours, Simon. I looked it up on rutracker and actually found two torrents with the movie "Road to the stars":

...at least one of the two works. Unfortunately there seem to be no subtitles available for those who do not understand Russian.

Funny thing Pavel Klushantsev died the same year as Stanley Kubrick, a month and a half later...

On rutracker there is a lot of material by him, including publications for children about the same topic: http://rutracker.org/forum/tracker.php? ... 0%B5%D0%B2

It does seem that Kubrick took inspiration from Klushantzev, or else they were both products of the same propaganda/smoke and mirrors program.
From the book "К другим планетам!", "To another planet!" (1962), the rotating space station being built, just like in Odyssey 2001: 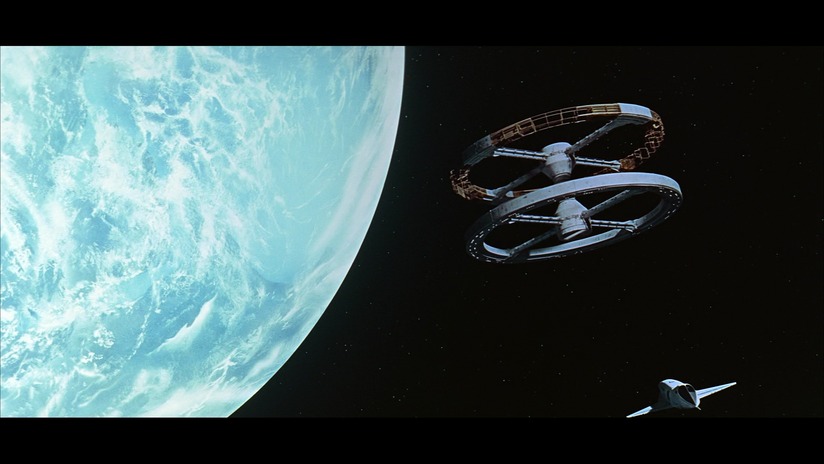 He also created a film called "Luna" (here on IMDB). Judging by the synopsis, it seems to be an equivalent to the Disney movies featuring Von Braun, to prepare the public to the upcoming fable of the space age. You do not have the required permissions to view the files attached to this post.
Top
Post Reply
66 posts