If NASA faked the moon landings, does the agency have any credibility at all? Was the Space Shuttle program also a hoax? Is the International Space Station another one? Do not dismiss these hypotheses offhand. Check out our wider NASA research and make up your own mind about it all.
Post Reply
First unread post • 1385 posts

Talking about footprints!
This is an image of the italian newspaper "Il messaggero" reporting the news of the man of the moon back in '69. 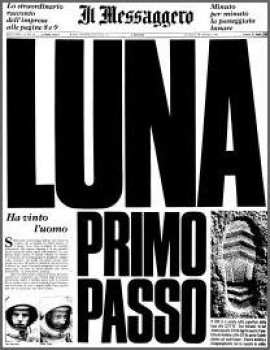 Now we are told that the image of the footprint on "Il messaggero" was obviously a fake -- compared to the official picture of Neil's Armstrong first step:

Only ten or twenty years ago it would have been denied on principle that an image on a newspaper in our democracies could be faked. Today, some of these manipulations are used to "prove" that the failsafe system works. That fakery isn't really possible. They need to do this also thanks to the fact that we are here investigating and asking questions.

(The first picture above comes from the blog of major swiss disinfo agent & shill "Paolo Attivissimo", which I will not directly link to. But the pic is widely available on the internet, as a reverse search on google images can prove.)
Top

Jonathan wrote:It would be really bad if this was supposed to be a real image.
But since it's only a nice looking photoshop job intended as a wallpaper analyzing it is just a waste of time.

I love this NASA wallpaper! I'm not going to waste my time analyzing it. Who cares about the ridiculous/unmatching left/right Rover wheels? I'll just stitch it in my living room - because I love to think that we intelligent humans actually went to the Moon ! Yes, this black & white picture is an actual official one released by NASA : http://apod.nasa.gov/apod/ap040605.html
Top

simonshack wrote:Yes, this black & white picture is an actual official one released by NASA : http://apod.nasa.gov/apod/ap040605.html

Those hills in the background... they seem so close they look like fake scenery. What a strange, strange place is the moon!

No seriously you can clearly see the passage from stage set with fake trampled moon sand to projected background. This stuff is outrageous.

it's really a shame they never took a tripod with them on any of the missions so they could take photos of the stars with the required slow shutter speeds. I guess a tripod was too heavy, especially since they had to stuff a moon car into their little space ship and those golf clubs too. Of course they could have just fastened a camera to their space ship and used it for a tripod but I guess photos of the stars taken from the moon wouldn't be nearly as scientifically rewarding as dune-buggying or playing golf.
Last edited by lux on Wed Feb 29, 2012 7:18 pm, edited 1 time in total.
Top

2 spacesuits go fly a kite in a sandstorm.

2 spacesuits go fly a kite in a sandstorm.

Still amazed a US flag can survive a cosmic radiation without burning...
Top

Q_prime wrote:Still amazed a US flag can survive a cosmic radiation without burning...

Please explain. How would the radiation make it burn?
Top

These are the historical TV images of the launch of Apollo 4 - reportedly the first (unmanned) Saturn V rocket which paved the way for NASA's quest for the Moon. The excited TV anchor heard screaming his bowels out is none other than America's sweetheart Walter Cronkite. The date is 11/9, 1967:

I have put together a series of successive frames from the above video. It makes for a most colorful, Warholesque (or simply grotesque?) canvas: At 2:07, the artist goes mad - and decides to throw his paintbrush across the screen: But who would buy it? Any bidders?
Top

Indeed, NASA seems to have been set up from the beginning as a sort of "in-joke" for the "elite" Masonic brothers whilst pumping taxpayer money for who knows what (most likely the military-industrial complex).
Top

dunno why everyone always moaning about no wind or atmosphere on the moon;
all this Apollo kite-flyin' flag-waving 'looks a breeze'...

Q_prime wrote:Still amazed a US flag can survive a cosmic radiation without burning...

Please explain. How would the radiation make it burn?

Note the bold in quotation, it is about cosmic radiation or to be precise cosmic ray from the sun. The moon surface is directly exposed to the sun, textile might be affected and will not survive the intense radiation. Colour in that flag would be significantly altered. As stay, that raises more question: how these so-called astronauts know they would have no problem planting flag without testing the behaviour of the material ?
Top

Not that I think it is all real.
But your logic is flawed. The name for the flaw is "non sequitur" meaning "the inference does not follow from the premise".

How would it be known that there would be no problem planting it at all?
It is an assumption that they did know, albeit a reasonable one, but still ...
There where unmanned missions before, so they knew something, and driving an anchor into rock at worst is nothing entirely new.

Only with a lot of luck will going from a flawed premise get you to a correct conclusion.
Top

Better clarification, a flag directly exposed to the sun with no atmosphere on the moon surface might be affected due to the solar cosmic ray. I suppose solar radiation can alter the flag textile (possibly synthetic, can anyone tell the name of that textile used for "moon landing"?) and its colour thought other unknow rays came into equation. Another possibility is the flag may somehow burn.

It is true unmanned mission happened before, one of them (Explorer III) went further to mesure the intense level radiation from Van Allen shield that protect Earth from deadly solar storm. The Geiger was estimated thousand time the maximum measurement from the instrument equipped in Explorer III. That bring another question: why NASA did not test an organic element into the Van Allen shield? If the solar storm can affect all unprotected electronics at its maximum level, how was Apollo mission possible? Only in Hollywood.

I based my question on this source. Perhaps nobody ever test the flag on these described condition.
Top
Post Reply
1385 posts