If NASA faked the moon landings, does the agency have any credibility at all? Was the Space Shuttle program also a hoax? Is the International Space Station another one? Do not dismiss these hypotheses offhand. Check out our wider NASA research and make up your own mind about it all.
Post Reply
First unread post • 1557 posts

When they shake hands at the end [quite vigourously by the look of it] shouldn't they be 'flung' around the place [in zero-g] by inertia unless they are shaking hands with exactly the same 'force'?
Anyone with any knowledge as to why this isn't the case [not that I am sure it should be]?

icarusinbound wrote: They are all axially aligned, very unrealistically. There is virtually no front-to-back, or side-to-side component in their movements, until the last few seconds when we get the guy in the middle back row begin to awkwardly crank 'forwards' into dubious perspective. Even their hair, now not kept cropped to a military buzz-cut, only sticks up and never sideways (and presumably is no longer a floating health-hazard that could be breathed-in, along with all that fluff and dust from the jail- break gym clothes they've got on). Recall that all the build and manning operations performed with exacting surgical ceremony in Apollo days were super-clean to beyond the point of OCD insanity. These guys look lived-in. More like a awkward frat-house than a science lab clean- room.

Yes, I've noticed that too. The hair always floats upward. Same with the clothing. It always seems to ride upward and they are frequently seen in other videos (not here) pulling it back down. I've looked at quite a few "vomit comet" videos and I don't see that happening at all there.
Top

burningame wrote:Thanks Fb. I consider that comment an honour, despite our obvious music differences - to whit, the latest thinking-point embedded in my brain, for which I'm attempting some kind of answer - that is, the contention that "they'll be playing the Rolling Stones in 100 years"...please don't respond, it'll take me six months at least to come up with an acceptable answer to that

Goodness, what difference does it make if we have musical differences? De gustibus non disputandum. In any case, we'll both be dead in 100 years, and I can't imagine why it matters in the slightest whether or not the Stones are still listened to. Until I'm gone, I'm this:


China's fourth manned space flight ended with a jarring touchdown in Inner Mongolia after a successful flight to test docking procedures and techniques needed for building a Mir-class space station later this decade.

China's Shenzhou 9 spacecraft, carrying two men and the first Chinese woman to fly in space, returned to Earth on Friday after an ambitious flight to a prototype space station module, plunging back into the atmosphere and descending under a large parachute to a jarring touchdown in Inner Mongolia. [ouch!

The re-entry was carried live on Chinese television, with commentary, shots of the crew in the cramped decent module and views of the spacecraft's fiery re-entry plume as it streaked across the sky on a steep northeasterly descent toward the landing zone.

The Shenzhou 9 spacecraft descends under a large parachute, on target for a landing in Inner Mongolia. (Credit: CCTV)

The 12-day 15-hour mission ended with a jarring rocket-assisted landing in Siziwang Banner, Inner Mongolia autonomous region, around 10:04 a.m. local time (GMT+8; 10:04 p.m. EDT Thursday). The spacecraft appeared to slide along on its base for an instant before rolling end over end, coming to rest on its side.

Recovery crews work to help the Shenzhou 9 crew members out of their cramped spacecraft after landing.(Credit: CCTV)

Within minutes, recovery crews stationed nearby reached the landing site, opened the vehicle's hatch and carried out initial medical checks.

While Chinese officials have mentioned the possibility of eventual flights to the moon, the space station project is the near-term focus of China's manned space program.

To perfect the techniques and procedures needed to build a space station, an unmanned Shenzhou spacecraft carried out an automated docking with Tiangong 1 shortly after lab module was launched late last year. The Shenzhou 9 flight was China's first manned docking mission and at least one more piloted flight to Tiangong 1 is expected next year.

The Chinese news agency Xinhua said Tiangong 1 would be maneuvered to a higher orbit after Shenzhou 9's departure to "wait for another spacecraft." The news agency said the module was designed to operate for two years and accommodate six docking "procedures."....[more @ http://news.cnet.com/8301-11386_3-57463 ... =mncol;txt 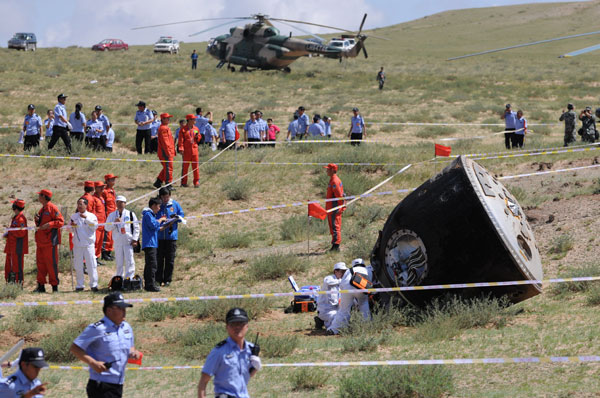 @ http://usa.chinadaily.com.cn/china/2012 ... 538446.htm
"The return capsule of the Shenzhou IX spacecraft touched down in the landing area in the Inner Mongolia autonomous region at 10:03 am on Friday. Photos by Wu Yunsheng / for China Daily"

The name "Tiangong" means "heavenly palace" and "Shenzhou" means "divine vessel." "We now feel that the public should be involved in the names and symbols as this major project will enhance national prestige, and strengthen the national sense of cohesion and pride," said Wang Wenbao, director of the Manned Space Engineering Office.

The Chinese government has also said it plans to send astronauts to the Moon, and possibly beyond, in the decades to come, and the space station is part of that project.


Students of Zhengzhou No 11 Middle School hold pictures of Liu Yang, China's first female astronaut, to celebrate the return of the Shenzhou IX capsule, in Zhengzhou, Henan province, on Friday. Liu graduated from the school 15 years ago. Photos by Wu Yunsheng / for China Daily wrote: [ADMIN: Fixing broken links/images pass 01-14-2018; Unfortunately, the above analysis has been lost. Hopefully it is clear in context what images are being analyzed. -HP]


http://fotoforensics.com/sample-ela.php wrote:End of the Rainbow
The final item that we can tell from this picture comes from the faint blue and red patches......
The red/blue patches are rainbowing. They are a tell-tail sign that an Adobe product was used on this picture

Also....the main capsule picture with the lane-tapes shows all sorts of ELA hot-spots... And although I can't track it down, the military helicopter with the 'craft' in the mid-ground is a part-homage to the suspect Gagarin landings pictures.

gargarins_zpsxxih0zyh.jpg
You do not have the required permissions to view the files attached to this post.
Top

Yes Icarus, they are all dodgy as hell. It's also funny that the credit says "Photos by Wu Yunsheng / for China Daily" but the only Exif data states "Copyright: wangzhongju". Maybe that's their head shooper This has to be the ultimate pinnacle of technological endeavour;
"Mankinds Greatest Achievement" -
First email in space !!!!!

^ They replied to the email but all 3 astronauts are uncertain as to how long it will take for them to receive the male enhancement pills they ordered.
Top

Spot the convenient gapping at "?"...assuming there ever were actual students in a real assembly, one of them seems to have had a left-lateral craniectomy courtesy of Adobe. You can just see their headless hand supporting the chin, below the blocking picture. Note the curiously-unheld PRC flag, in the right-hand (is it really holding anything??) almost just 'pinching' the giant picture, with a lot of red-bleed down the fingers. The hands look at least a decade older than their owner...the finger tarsal-bones look fully-developed (a key indicator or skeletal development) yet the 'owner' looks as if he's barely in his teens.

The flat 2-D gawper at "!" is a real paste-in...he's too close to the row in front, and too tall (if he were pitched forward on the seat, that would lower him). And he's some kind of visual tag-geist, acting as a vector for the fanpic.

And what's this guy doing? Are his truncated fingers operating an edited-out computer games controller? He's not clapping...

Astronauts Celebrate Thanksgiving in Space on Two Spaceships
Credit: NASA
Members of the STS-129 crew share a meal while on the space station.
The scene on Thanksgiving day will be similar onboard space shuttle Atlantis.
http://www.space.com/13809-photos-space ... stmas.html

Tuna Flakes & Stuff in Oil Can Has Gravity

You may wonder what is seen on below NASA photo:

It is in fact a US$ 1 billion, 8.5 tons anti-material detector AMS-2 being fitted on the ISS last year. The AMS-2 is the brain child of Nobel Prize winner, dr Samuel Ting of Cern, Geneva: Ting believes that anti-materiel particles can be found in the radiation in space and AMS-2 is checking millions of particles every day and sends the data down to Ting at Cern daily for checking by some PhD of the Ting staff. No anti-materiel particle has been found … so far!
Cern and its 2800 PhD physicists are otherwise famous for its LHC where billions of protons are accelerated to collide with other protons at 99.99% of the speed of light. As the protons are small only 0.1% of them collide but there are still millions of collisions where the protons come to stand still and the kinetic collision energy is transformed into other particles (the two colliding protons remain intact!) and – hast Du mir gesehen – last week in a few of the millions collisions analyzed a Higgs boson particle with a mass 125 times the proton mass appeared … and disappeared (actually it transformed itself into some other particles) … as analyzed by a quick computer. So there were big celebrations at Cern. A computer had found a collision where a Higgs boson may have been created! This computer will now get a Nobel Prize! Of course the computer finding cannot be verified by anyone outside Cern due to lack of an LHC + computer. And no anti-materiel particles will ever appear at LHC. For that you need an AMS-2 in the sky. If you believe the fairy tales of Ting and Cern … and the ISS, of course.
Top

Coming soon (September) to the ISS ...

portrait_zps6o3cnvt7.jpg
http://www.nasa.gov/mission_pages/stati ... index.html
You do not have the required permissions to view the files attached to this post.
Top

C'mon! Really? People still believe these images?
Stars or no stars... Blatant CGI or not...

lux wrote:^ They replied to the email but all 3 astronauts are uncertain as to how long it will take for them to receive the male enhancement pills they ordered.

And which one will be the first to give their bank account information to some lucky Nigerian??
Top
Post Reply
1557 posts