Discussing the most relevant "sequels" or "reminders" of 9/11. The so-called "War On Terror" is a global scam finalized to manipulate this world's population with crass fear-mongering tactics designed to scare you shitless.
Post Reply
First unread post • 168 posts

So "Gill Hicks", a well known 7/7 "survivor" already featured in this thread, just gave a talk on TED talk. You can watch it here:

This was filmed in May, but is now with the newest TED talks, so I guess published days ago. Perhaps around or just before the Brexit vote, not that there should be any correlation except for both things relating to the UK.

Not much to comment on the bullshit text that this actor recites. You can read the full transcript on TED and it will take away less of your soul than if you subject yourself to the performance. Prosthetic legs and moving pictures of bags and rescuers included. The whole thing having visibly no purpose whatsoever out of the sheer propaganda.

Here's the first sentence, and it will suffice:


I could never have imagined that a 19-year-old suicide bomber would actually teach me a valuable lesson. But he did. He taught me to never presume anything about anyone you don't know.

Right. I won't presume you are telling the truth then.

Some of the imagery from the show:

a bag with 11 object (typical well-presented holocaust/911 memorial collection of "moving" garbage)
bag and 11 objects.jpg
(am I crazy or does the blood say "9 11"?)

a souvenir from Andy the copper with carefully selected minorities
copper.jpg
(a woman just came back from H&M on her naked feet, while our hero wears striped leggings and clown boots. whatever)

the cute prosthetic legs
prolegs.jpg
You do not have the required permissions to view the files attached to this post.
Top

A POLICEWOMAN who provided life-saving first aid to fellow Tube passengers during the 7/7 bombings has warned Londoners to "be alert" to terrorism as she retired 11 years on.

They sure do love their numbers...It doesn't say in the report/article but I read elsewhere that she retired after 29 years of 'service'...


Pc Kenworthy, who was awarded an MBE in 2008 and spent the later years of her career guarding the Palace of Westminster, said she had decided to retire on the 11th anniversary because she wanted to "remember it for not just a sad event".

One of those she tended to was Martine Wiltshire, who had lost three-quarters of her blood and credits Pc Kenworthy for saving her life by holding her hand, moistening her lips with water and giving her a belt to apply as a tourniquet to her left leg to stem the bleeding.

Is losing three-quarters even possible to survive?


One of the comments by a reader:

You were given a gong and moved to Westminster. Can you not see how false you and your story is ? What's the crime in Westminster ? Expenses ? Lies ? Exaggeration ? War? Project fear ? Illuminati ? Masons ? Paedophiles ? Have you arrested anyone ?

Why have you been wheeled out to try and give some fabric to a tissue of lies ? Go back to the house and the 77 bars there.

We no longer want or need your story

Now I've realised what 7/7 was all about. After watching the recently uploaded official videos from from the Live 8 concert in London's Hyde Park on the weekend prior to 7/7.
Firstly I'm blown away by the quality of the videos and the performances, even by artists I can't stand.
The Live 8 concert was the ritual before the sacrifice, a sort of celebration of western decadence to justify Tony Blair's comment of "We know that these people act in the name of Islam"

The first video is back stage where we see the major performers fawning over Bill Gates, and KofI Annan the head of the UN who I think also attends the G8 meeting.
(Along with Sting's nauseating comment "This concert is a threat to the G8")

Whilst watching the REM set I'm now certain 7/7 vicsim Miriam Hyman is in the crowd. Prior to her sacrifice.
Go to 4mins 44sec

Here's a still shot of the stage in the background of the photo featuring Miriam and her sister, on her sister's blog. 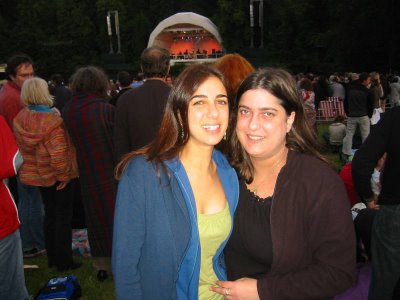 
It'll be interesting to see if any more 7/7 vicsims can be spotted in other Live8 videos, given the high number of close up shots featuring people in the audience.
Top
Post Reply
168 posts