Since virtually all public records in Connecticut regarding this December 2012 agit-prop theatrical performance (most likely staged at a closed-up school that had been used only for furniture storage in recent years) have now been sealed, either by court order, executive order or hastily passed statute -- it's going to be a VERY INTERESTING pre-trial "discovery phase" (when proposed evidentiary material must be shared between opposing sides) IF this supposed lawsuit EVER really goes forward.

From the New York Daily News:

The grieving Newtown families have fired back at Bushmaster.

The parents of five of the kids killed at Sandy Hook Elementary School — along with the loved ones of four staffers who died trying to save them and a teacher who survived the slaughter — are suing the maker of the Bushmaster AR-15 rifle that was used in the massacre two years ago.
“The AR-15 was specifically engineered for the U.S. military to meet the needs of changing warfare,” attorney Josh Koskoff of Bridgeport, Conn. said Monday.
“The weapon was not designed for home defense or hunting. This weapon was designed to efficiently kill other human beings in combat.”
Detective Barbara J. Mattson of the Connecticut State Police holds up a Bushmaster AR-15 rifle, the same make and model of gun used by Adam Lanza in the Sandy Hook shooting, during a hearing of a legislative subcommittee reviewing gun laws in Hartford last year.

Bushmaster knows that, but “in order to continue profiting from the sale of AR-15s, defendants chose to disregard the unreasonable risks the rifle posed,” Koskoff wrote in the 40-page complaint filed in Bridgeport Superior Court.
In addition to Bushmaster, the families are suing firearms distributor Camfour and Riverview Gun Sales, the now-closed gun shop in East Windsor, Conn. where the mother of mass-murderer Adam Lanza bought the Bushmaster.
“These companies assume no responsibility for marketing and selling a product to the general population who are not trained to use it nor even understand the power of it,” Bill Sherlach, whose school psychologist wife Mary was among the 26 victims, said in a statement.

Sherlach added that he supports the Second Amendment.
“But I also believe that the gun industry should be brought to bear the same business risk that every other business assumes when it comes to producing, marketing and selling a product,” he said.
There was no immediate response from Bushmaster. But the Protection of Lawful Commerce in Arms Act shields most gun makers and dealers from civil action “resulting from the criminal or unlawful misuse” of a firearm or ammunition. There are, however, some exceptions.
Lanza used a .223-caliber Bushmaster Model XM15 rifle — bought by his mother Nancy — to kill 20 first-graders and six staffers at the Sandy Hook school, according to the Connecticut State Police.
The disturbed 20-year-old used a Glock-20 pistol to finish himself off as cops were closing in, they said.

Lanza was also armed with a SIG Sauer 9-mm. semiautomatic pistol, although there is no evidence he fired that weapon. He used a .22-caliber rifle to kill his mother.
It was the second-deadliest mass school shooting in U.S. history. Despite that, the National Rifle Association and their Republican allies in Congress were able to thwart the federal government’s attempts to tighten gun control. And since Newtown, there have been 94 more school shootings.

So far it's hard to believe that all the above-named defendants were in on the scam/drill from the beginning, but in the intervening two years, of course, various and "highly persuasive" back-room deals could have been worked out. And if the defendants' lawyers all agree eventually to "settle out of court" and no trial ensues, or if the judge dithers and dithers (to generate maximum publicity) and then simply dismisses the case, the prime theatricality of the whole affair will only become more obvious than it already is.

Gene Rosen and Robbie Parker are actors,Ryan was a pawn and Adam a creation, it's pretty much that simple..
Top

You'll see Noah in the 2nd column from the right. 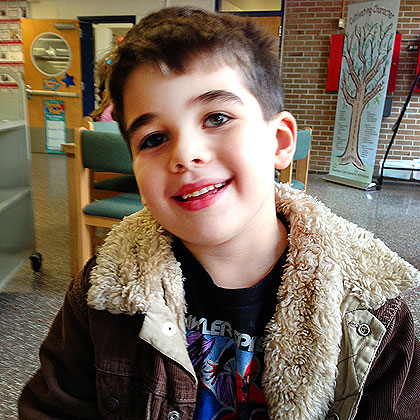 Credit to 'Professor DOOM1' on YouTube for this find

Note that in both the large and composite versions of this picture, above and behind the boy's left shoulder (top right as viewed) is the depiction of a pull-up portable display stand.

It carries the words 'Cultivating Character', punningly printed above a metaphorical tree. A highly-appropriate piece of information placement: you might almost wonder if a whistle is being blown by a hall monitor.

These tall fabric display stands are a flimsy cross between tensioned roller-blinds and a sash. With an awkward centre of gravity, to avoid falling over they have to sit back a few degrees off from vertical. This curious example is unrealistically-parallel to the school brickwork, which is then photomorphically slanting at near to the angle the display stand would be expected to be sitting at - if this were real world. Lux, is this fisheye distortion, or pixelfiction?

And in this otherworldly juxtaposition, again looking at this strange little North American display stand...is that the support pole resting on the wall behind it? Curious. And I do hope the strangely parallel red boxes behind it aren't a fire hose....

Further credit to ProfessorDoom with his attempts to rationalise the possibility of psyop perp imagery mismanagement http://zeeklytv.com/video/12224/Sandy-H ... SM-says-so

New Year indeed it is, all across the world. Whether it shall be truly happy, we shall have to wait and see. And watch.
Top

Something like this is so simple that no-one can fail to understand it.

What the hell could the fallback position possibly be?

"Err we decided to commemorate the other victims of other shootings, on different continents, on our memorial... I know it doesn't make much sense... but err we're in mourning & our behavior is not what one would expect"

It strongly suggests the possibility of a 'central pool' from where all their bullshit flows.

brianv wrote:It strongly suggests the possibility of a 'central pool' from where all their bullshit flows.

Maybe time is ripe for " WHO WRITES THIS SHIT" thread

Pozner is reaching Big Time Celebrity Status, the Joan of Arc of the new millenium

They even gave him a new name. Ready for it?

Let's just say Hoaxafia and call it a day, shall we?

In a "Funny, how did that get there?" moment, BBC casually mentions this in an article posted on December 17th.:

The article describes how certain recycled photos are "circulating" in relation to events, and points to social media as the culprit.

Use social media to create the back stories and blame social media when caught out. It's a win win.
Last edited by Farcevalue on Sun Jan 04, 2015 12:26 pm, edited 1 time in total.
Top

Just for the record...

Véronique Pozner is the lady who was interviewed by Anderson Cooper - remember ? This video is posted on her (alleged) husband Lenny's Yotube channel :

I left a respectful comment there ... "Lenny, so sad to hear that your son was shot once again, in Pakistan this time..."
Let's see if Lenny respectfully responds to my comment.

I replied with condolences as well Simon, Every member of CluesForum go to Pozner's You Tube page and do the same!!
Top

Some interesting research on this vicsim's family, with connections to Freemasons and RFID chips, the mainstream media, and all kinds of shadiness.

Interesting, I just checked and the comments are still there, although the replies are hidden.

Adam Curry and John C. Dvorak were less than inspirational (or downright shilly) on the latest No Agenda podcast, number 684, still available for free until they upload the next one on Friday. At 2:10:48 they briefly discuss and dismiss the photo as a Photoshop, without any regard to how it got Photo-shopped, nor any mention of the other photos and or footage that featured the twice expired Pozner. There was mention of alternative outlets that have called attention to the "mistake". Curry and Dvorak are of the opinion that it is an attempt by someone (with access to BBC?) to discredit conspiracists. Basically, move along, nothing to see here.

It could be some sort of litmus test, as opposed to a "mistake", to gauge the level of awareness of the hoax-busting crowd. I have the impression the testers seeded the story themselves. Curiouser and curiouser.