This woman does look out of place especially in a dress shirt running a marathon. Lazlo wrote:Bear With Me Please 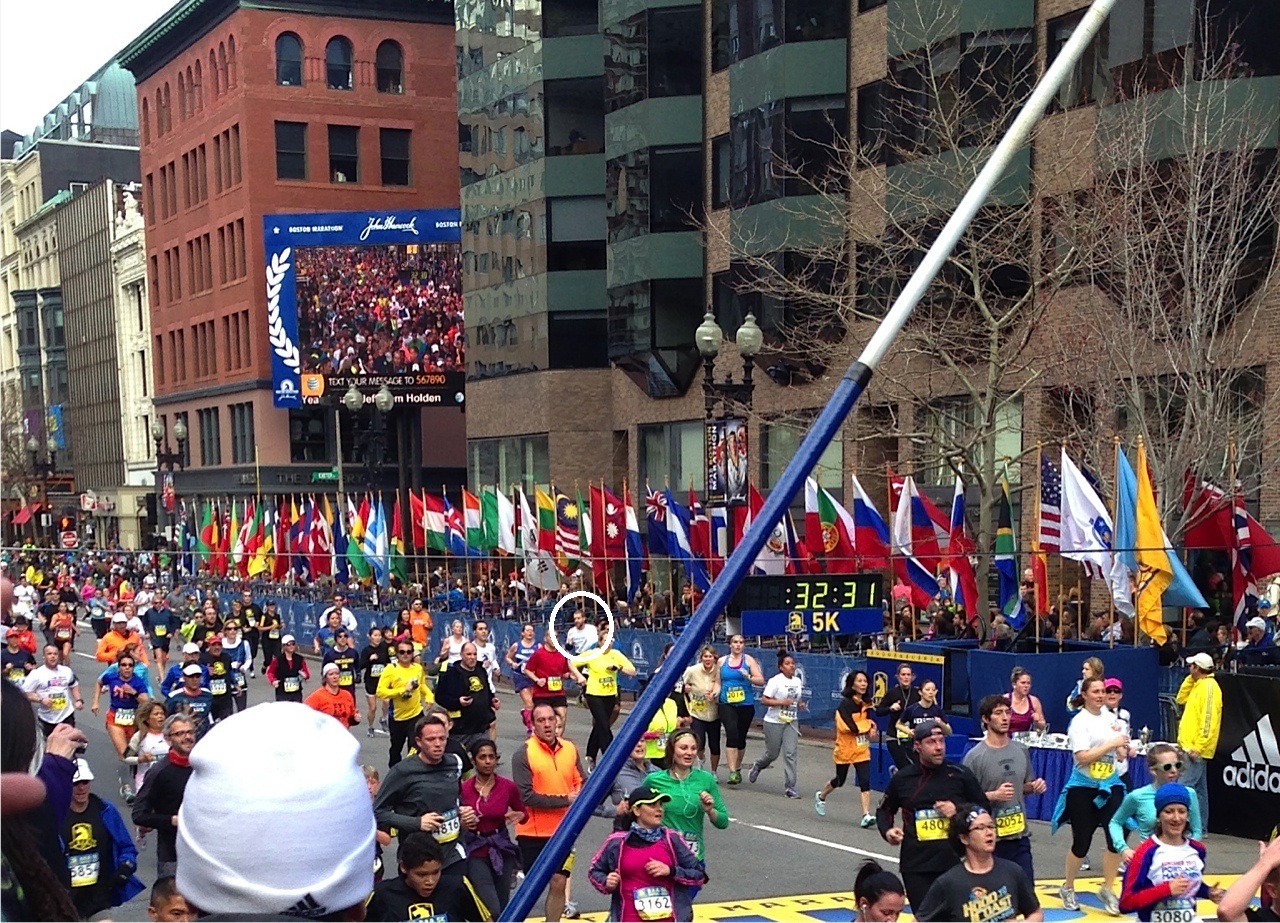 One thing that now strikes me about the image above [which I've seen previously on here many times] is how 'varied' the runners are considering it is 5k 'in' after 32m 31s i.e. there are some strikingly 'unfit' people running side by side with fairly 'fit' looking people.

See the three girls [one in the blue vest just right of the blue/white pole/barrier and the two people either side of her] compared to some of the others.

As I've never partook of anything such as this I have no knowledge of whether this would be the case or not, can anyone offer an informed opinion please?

The thing that struck me when I was looking for the unfit people was how clean and fresh these 'runners' are. No sweat stains or spillage from water cups, hair still looking fly. Cleanliness aside,the clothing looks wrong. I honestly don't know, but would anybody really do a marathon dressed like the woman at the centre/bottom-edge: hat, bandana or scarf round her neck, windbreaker etc. I'll bet she's not wearing shorts, either.
Top

Not sure if it's been mentioned but the runner in the blue shirt and sunglasses in the bottom left corner is missing part of his/her leg!
Top

Celeste Corcoran and her daughter Sydney:


Ever wondered how many alLEGed Boston Marathon amputees there are? Apparently, 16 lost a leg or two.

The two women pictured in my above post are Celeste Corcoran and her daughter Sydney. Mother Celeste reportedly lost BOTH legs:

Here we see mother Celeste lying on the ground "after the terror blast":

I have to wonder: is it physically possible to lose both legs - without your trousers getting damaged ?

My other question would be:

How can two pressure-cooker bombs chop off that many legs so efficiently - yet leave the rest of their victims' bodies intact?

ADRIANNE HASLET-DAVIS (10 days after the event) 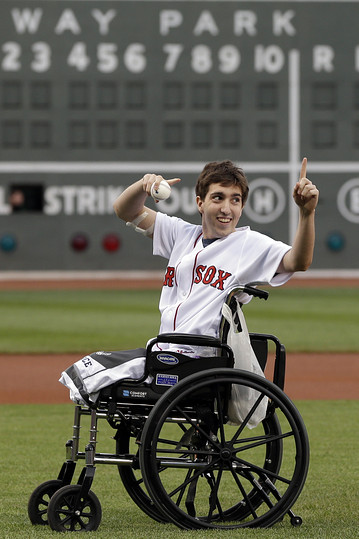 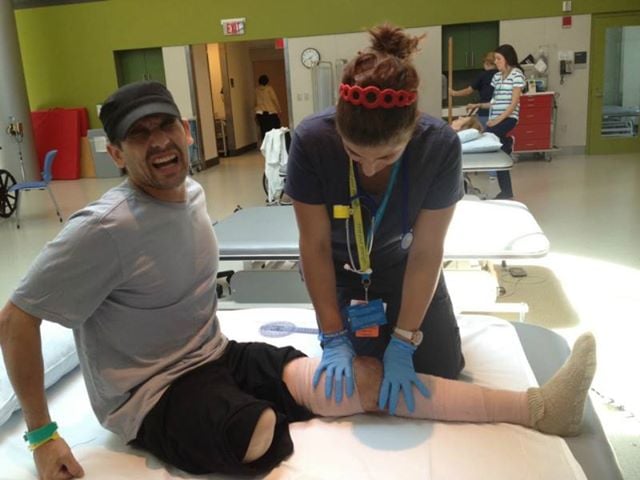 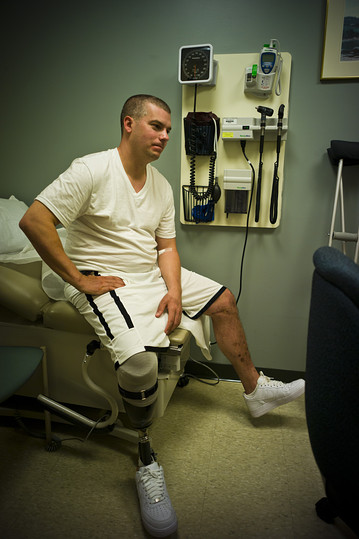 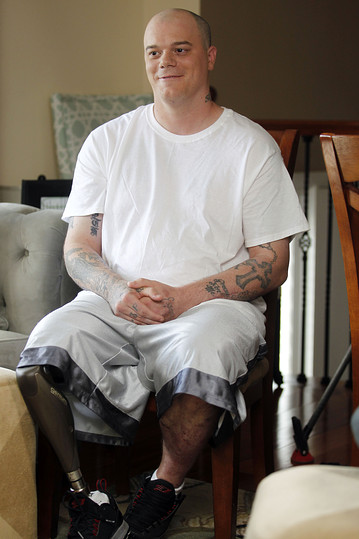 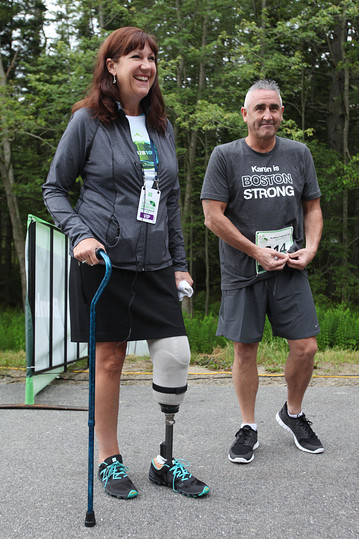 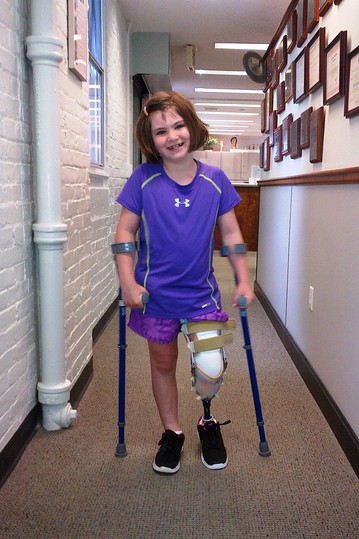 PATRICK DOWNES AND JESSICA KENSKY - the one-legged couple
"Patrick and Jessica, who both lost their left legs below the knee [!!!], recently celebrated their one-year wedding anniversary." 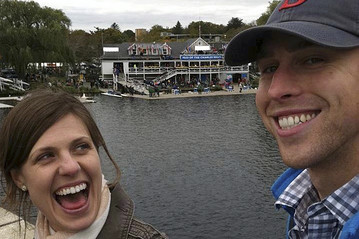 VICTIM 15 and 16
"In addition, two other amputees have chosen to remain anonymous.
They are both men, both Massachusetts residents, one over age 65 and one in his 40s, who each lost a leg, according to hospitals." 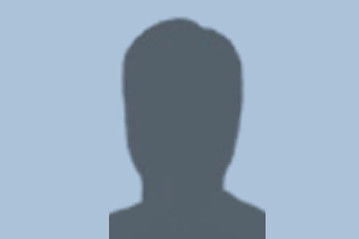 I don't know about you, dear reader but... oh, forget it. I'm just lost for words

All I might add - as a personal thought - is that this story stinks to high heaven.
Top

They are pouring it on thick here in Boston and all of it oozes sentimentality and heart-string tugging. It is so heavy handed and overdone and utterly tedious. It creates a suffocating atmosphere with no room for questioning or challenging any facet of this pathetic and absurd fiction. I hate to think that we will be seeing more and more of this BS Boston Strong and its ilk used to "unite" people but I think this kind of sloganeering will get attached to future fake tragedies.
Top

AmongTheThugs wrote:Not sure if it's been mentioned but the runner in the blue shirt and sunglasses in the bottom left corner is missing part of his/her leg!

Wow good catch! Its obvious what happened though. The Jokers bomb was so powerful with the evil of Allah, that when it exploded pieces of shrapnel flew out faster than the speed of light. This poor womans leg was vaporized by a time traveling ball bearing, which removed her leg and exited the scene through its own, induced by relativistic speeds, black hole before the light from the explosion could reach the cameras lens. The sudden tear in space-time created a multi-tiered worm hole linking present day Indonesia with New England in September 2001, and Boston April 2013 and an as yet unknown locations and times. This is why nothing makes sense with 9/11 (and possibly many other incidents we conclude are fabricated due to their implausibility). The planes were transported through a worm hole through space and time by the evil Joker and his dooms day bomb 12 years AFTER the event happened! The gravitational lensing from the near by black hole is what caused the odd distortions, glitches, physical "impossibilities", and inaccurate perspectives and scaling present in all the 9/11 footage. Its not fake footage like we all concluded, merely the first time someone has filmed inside the influence of a black hole! What a day for Science!

I am amazed that this one picture was able to solve 9/11 and the MH370 disappearance as well as tie the BB into both. So Muslims really are terrorists that control space time and fly phantom planes into buildings. And conspiracy theorists should not point fingers at the government either shadow or puppet, as they have just been trying to protect us from the evil Dr. Whozarnoff and Muhammad the time bender.

So really, "There is nothing to see here, move along." We had a good run guys, but I guess it's time to go get my guns registered, put my kids in public school, and Rock the Vote, cause everything's ok!
Top


Article dated May 29, 2013 :
"On April 15, Sydney Corcoran and her mother, Celeste, were standing near the finish line of the Boston Marathon waiting to cheer on Sydney's aunt Carmen Accabo when a blast ripped through the crowd. The teenager, whose iconic photo was splashed across the news, suffered a severed femoral artery. Her mother lost both legs below the knee."
https://shine.yahoo.com/parenting/bosto ... 00466.html For those who haven't seen this, I highly recommend this 1 hour documentary by Betsy McGee.

001-BaumanFeature,medium_large.JPG
First image: Bauman as Christ. (Love the subliminal reminder that it's all so weighty.)

Subsequent images: Bauman as Joe six-pack, just hangin' with his yoga girl and getting back into tolerating loud noises during his regular skeet-shootin'. Even if it weren't scripted, his life is a compilation of cliches.
You do not have the required permissions to view the files attached to this post.
Top

I haven't seen this discussed yet...

Can anyone tell me what's going on the the background here? To me, it looks like it was windy that day and their green screen wasn't secured properly. Why else would Carlos and the interviewer be unaffected but the background stretches and shrinks?

*
Not much discussion, but was brought up on page 22.

I saw a couple of things. I tried to go back and get time references but this stuff makes me dizzy. First thing I saw, in the first minute or so, looked like a scanning error. The building looked like it was coming down free fall for a millisecond and then the whole thing got compressed in an up and down fashion. I am going to call that an electronic glitch. Then I saw the bottom of the buildings (where they meet the sidewalk) move back away from the camera. The next thing I noticed were left to right "ripples." The last two observations I am going to call "physical" as opposed to the first observation I made that I think was electronic.
Top

Yes, to us this is one of those 'slam dunks' that resembles the kind of strange screen stuff going on during the Moon Hoax and the "Berlusconi attacked" hoax, not to mention 9/11 and 7/7. It has been explained away as camera error, but it's obviously some kind of projection or virtual system that is sold to the hoax departments of our government as an alternative to some of the bluescreen/greenscreen problems they used to have with hair and fine detail edges. It may even be some advanced chromakey mapped to a curtain? Perhaps this allows for both the digital and physical glitches.

However, apologies if we didn't linger on it too long. We are always looking for the next things rather than resting on our laurels. We have a drive to wake people up and sometimes we don't spend time on evidence that needs further inquiry. The important thing is that it is not real untampered footage of a real scene. It's clearly Hollywood style theater.

Doesn't it also appear as if the sidewalk in the background is just a tiny bit too high? Kind of reminiscent the artificial and bad perspective in the Zapruder flick? It looks like he's standing in front of a Google Street View or one of those Quicktime Virtual rooms.
Top
Post Reply
1312 posts