No facial injuries in any of the pictures? No eyes or ears or noses missing? Only leg injuries? No faces dripping with blood just after the blast?
The young blond woman (marked E in Simon's picture somewhere above) with red tattered long sleeve sitting on the pavement had her left shoe blown off her foot but not her whole foot? How far away was she from legless Jeff Bauman?

The kid is having a private funeral. I guess that's what a family that is beloved and respected in the community normally does.

Its not like they won't be shilling for bucks off this kids name for years to come. Who knows, we may be seeing more families exhorting the little ones to take one for the team. Just one young victim can keep a family in sympathy bucks for generations to come.

His head sure looks different in this photo than in the others.

poor little Martir, I mean Martin with his poster with a the blue cross...
Top

Both look rather pasted in!


Note the wind direction indicated by the 5 flags to the left of the image.
Top 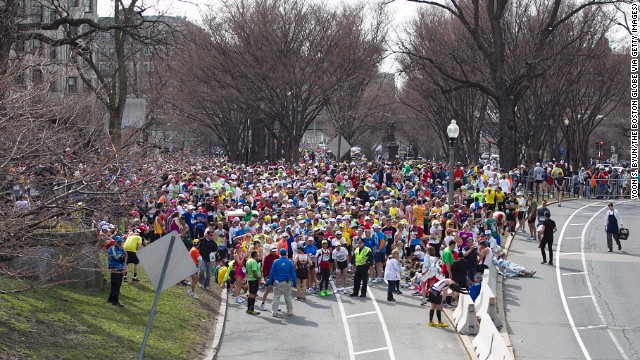 after which a couple of harmless smoke+noise bomb were exploded and whatever was produced in term of reactions and acting was enhanced with photoshop...

Hence probably not very useful to go and look for sign of photoshoppery in the earlier parts of the event unless they are very conspicuous.
Top

Something a little off about that tie. Like they couldn't decide where some of the creases should be on semi-transparent layers. Kind of coincidental cutting off of "tie fold" at the "string" as well.
You do not have the required permissions to view the files attached to this post.
Top

y0lked wrote:Collection of 27 photos immediately taken seconds after the explosion

Anyone know where these pictures are right now as the password doesnt work anymore. Cool she has expertise in photoshop!

She knew her daughter so well she had to look down to read every line she forgot about her.
Top So a Boston boat owner suspected somebody was sleeping in his boat (in the backyard) and called 911 and a Boston SWAT team arrived and started with perforating the boat with heavy machine gun fire and then they found an injured little boy in the boat that they think is a terrorist.

Rudy Algera wrote:No facial injuries in any of the pictures? No eyes or ears or noses missing? Only leg injuries? No faces dripping with blood just after the blast?

Well, if the shrapnels/BB's & nails couldn't even puncture baby balloons, perhaps that would explain it, no?

Here we se the three yellow balloons escaping unharmed, from low down in the blast 'epicenter':

Here they are seen flying up to the Heavens:

The three balloons clearly seen here "in the line of fire - right after the blast"...

As for the possible symbolism of those three yellow balloons - I'll let someone else have a go at it.
I don't want to end up sounding like a wacky, tinfoil-hat conspiracy theorist !

Both look rather pasted in!


Note the wind direction indicated by the 5 flags to the left of the image.

Very cool observation. Is this really being pushed as an original pic?

1) The 3rd flag is flying indicating strong winds from right to left, while at the same time the nearest two flags indicate little to no winds, and the farthest indicates winds from left to right. That can't all be happening at the same time.

2) The focus of objects is also inconsistent across the left and right sides of the female athlete crossing the line.

3) The men ("objects"?) in the middle of the street cast no shadows.

There are probably a ton of other inconsistencies if looked more carefully. There may have been original pics from that day. This doesn't appear to be one of them.
Top

There are a "ton of inconsistencies", to say the least. I'm not actually sure that's supposed to be her shadow or some crack filling on the road. She doesn't have a shadow if so!

This is also a cut and paste job. Horrible Black Marker around the legs being the most obvious signs. Thanks, everyone. I'm not as good at identifying anomalies in photos as many of you. It's interesting that this is one of the few images pre-explosion and it can't even be used to compare before/after! I'm going to keep searching. If you could, would you look at the side by side that I posted of the other angle of the finish line? I'm finding that the building on the right doesn't look right. In the meantime, I'm going to keep looking for photos from that day, particularly showing that side of the street. It seems a bit unlikely that they could have fit all those bleachers in there on the sidewalk, against the library entrance but it's hard to tell.

This is the photo I would like you guys to look at. Note that the 3 large arches are present on that building but I believe they are behind the overhang that goes across the road and we shouldn't be able to see them in this photo.

Here's a 2012 image of the finish line to compare. This looks similar to the above photo on the left (pre-marathon)

The numbers don't add up: It has been reported that there were 170+ injured, many of these injured required amputations of one or both legs, and 3 dead. Yet, I have not seen a single picture that reveals more than 30 to 40 people (injured and rescuers) in the area of the 'blast.
Very sparse wouldn't you say? At the forum the tables are still neatly in place. Where are the injured?

This seems staged at least in parts. The following was probably done in a studio. There was a director of photography that was directing the poses of the so called injured.

In this photo the lady in blue (or is it a mannequin? with that blank blinkless expression) and the one next to her are apart Here the lady in blue and the one next to her were obviously moved to be cheek to cheek. This to me means it was done in a studio where the director of photography could direct the various poses he wants from his actors.

I don't know if it has been noted already, but I just noticed that the finish line seems to have always been blue.
Check out the pictures hosted on wikimedia: http://commons.wikimedia.org/wiki/Categ ... on_by_year
But this year the finish line was a less reassuring yellow.

Also, in 2007...: "210 miles above Earth, Expedition 15 crew member Sunita Williams attempted something no other astronaut has ever done. She ran the Boston Marathon while in orbit."
http://www.nasa.gov/mission_pages/stati ... athon.html
Top

brianv wrote:There are a "ton of inconsistencies", to say the least.

I'm not actually sure that's supposed to be her shadow or some crack filling on the road. She doesn't have a shadow if so!

This is also a cut and paste job. Horrible Black Marker around the legs being the most obvious signs.

sunshine05 wrote: This is the photo I would like you guys to look at. Note that the 3 large arches are present on that building but I believe they are behind the overhang that goes across the road and we shouldn't be able to see them in this photo.

No, we would have been able to look at the arches on the left pic as well (Edited to add - If we hypothetically assume that the "bomb" pic were accurate, please see below for a feature comparision). However I am not so sure we should be baselining the left pic, particularly in light of nonho's post above as well as one more anomaly (buildings/street lamp positioning behind the overpass vs 2012 pic). The 2012 pic below is a better baseline (if valid). What is the source of 2012 pic below?