The "B-Team" was hired for this job. Shadows are ink-tooled on. I found that image while searching Google images for 2012 marathon pictures and saved it. It's posted on several blog sites but I can't find the photographer credited with the shot. I looked at 2010 and 2011 and they all look very similar and consistent with the 2012 image and different from the post "explosion" images. Thanks for looking at these for me. I appreciate it.
Top

Here's another one from 2010 and again the Lenox hotel appears to be much closer to the finish line than in the post "bomb" images.

Wow. They've made a massive mistake. To show how big I have fitted this image ( with trouble) into the 3D model of Boston Library

sunshine05 wrote:I found that image while searching Google images for 2012 marathon pictures and saved it. It's posted on several blog sites but I can't find the photographer credited with the shot. I looked at 2010 and 2011 and they all look very similar and consistent with the 2012 image and different from the post "explosion" images. Thanks for looking at these for me. I appreciate it.

My pleasure. Also can you please save the above pic where I marked the Wall zones, in your server. I am afraid imageshack might take it down or it will eventually expire.

2012 pics obviously less chances of being tampered, but you never know. Interestingly there are stands in the 2012 pic which might have been the template for the stand section in the photoshoop. Also lacking from the 2013 pic are the timers under the overpass. The finish line could have been blue on yellow this year instead of yellow on blue like previous years. Can only be proved through true non-MSM media pics if they exist.
Top

While the Lennox building appears closer, I think it can be explained by perspective / lens distortion issues. I'm not saying it's not possible but not definitive proof in my book.
Top

Sooo...no interview from the lamestream media with the elusive photographer who took the ~iconic~ photo of Boom Boom Baumann lying there unattended with his legs blown off?

Don't you think they'd want to ask him what it was like to stand there in the midst of all that carnage and callously photograph a man who'd just been maimed for life?

Don't you think they'd want to ask him how he managed such a well-focused shot without fainting or vomiting?
Top

"Runner Laura Cummins had an uneasy suspicion she’d crossed paths with the men suspected of bombing the Boston Marathon. A photo now proves it." 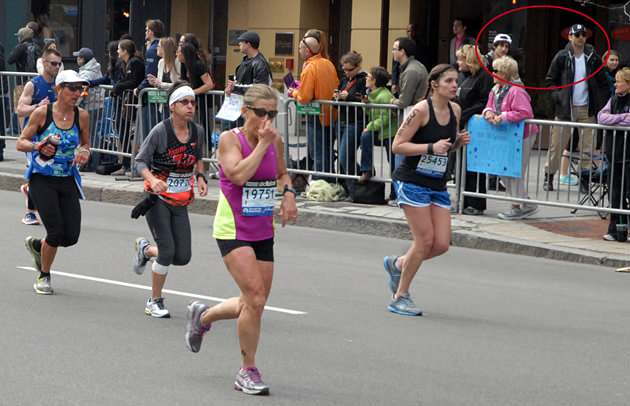 The Tsarnaev brothers look on in the background as Laura Cummins (No. 19751) finishes. (Bob Leonard/AP)

"On the morning of Sept. 11, 2001, the veteran flight attendant was flying from Washington's Dulles Airport to Miami. Her gate was adjacent to American Airlines Flight 77, which was hijacked by five Al-Qaida terrorists and sent crashing into the Pentagon. The attack claimed 184 lives.

But hey, there's also this other shot of THE SUSPECTS to be found in the news media - apparently captured at the very same location as in the above image with "Laura Cummins". Note bald guy in orange shirt at left ...

Here's yet another shot aired on MSNBC with the capped young "terrorists" - at VERY SAME location!
These two lads have got to be the most photographed terrorists of all time... They just don't seem to get enough of their manic eleven obsession. Any psychiatrists in the house?
Top

Thanks, Mickey. I saved the image you posted.

Anonjedi - yes, maybe it is lens distortion. That's why I posted it here because I heard that a lot about the Sandy Hook fire station images with the brown exterior building that appeared to be very close in some images and video. I just don't have the experience with them to know how to spot it, but to me it looks like in the "bomb" images they intentionally added a whole lot more seating to make it appear that there were many, many people there to witness it. I'm just not so sure all of that seating was actually there.
Top

Just putting the arrendondo gif from simon here again because, to me, this is the most damning evidence :

i hope this doesnt count as spam, i just want as many people as possible to see it ^^
Top

Fedge wrote: Just putting the arrendondo gif from simon here again because, to me, this is the most damning evidence :

i hope this doesnt count as spam, i just want as many people as possible to see it ^^

Absolutely not, mon cher Fedge - I thank you for re-posting it.

Here's my point: even if this little (botched) 'interview with Arredondo' might seem like a petty little detail in the overall "Boston bombing" image-pool, it goes to show how it might have ALL been crafted. What if - yes - what if every single video we have of that day was crafted in the same way? Would that be so difficult to conceptualize?

MOST people are still unaware of what can be done with computer-graphic technology - and I even include myself in that lot, as I do not have the tools to craft such imagery in any convincing manner. Therefore, I can easily imagine how hard it is for people who have zero experience in this domain to even consider it.

This also brings me to tackle the current "actors" versus "total CGI" debate we are having on this forum. Yes, it is evident that there is an effort by "Dallasgoldbuggers" to focus the attention on there being actors involved in these scams. But are these actors really THERE, in those locations in which we see them move and speak? See, for this "crisis actors" thing to become so popular in "conspiracy circles" reminds me of that Ace Baker clown claiming that "the planes were CGI - but the Manhattan scenery was real"! In this way, he simply introduces yet another absurd - and readily dismissable - concept: that the TV networks actually showed REAL imagery on 9/11 - but that somehow(?)this plane ("Flight175") was inserted in REAL-TIME over AUTHENTIC TV choppers' camera feeds...

In other words, 'Ace B' suggests that the TV networks were somehow duped by some external entity inserting planes into their legit TV feeds - hey, maybe by Binladen with his powerful satellite-transmitter from his hi-tech Afghan cave?

But here's the thing, regarding these latest 'minor' psyops (Boston /Sandy Hook / Aurora / Tucson and so forth): these actors we see may well exist in real life - but they may ultimately just be 'pixel layers', i.e. characters pre-filmed in some studio and inserted - as needed - into full-blown digital surroundings and sceneries.
Top

Great post, Simon. I have the same thoughts about what we're seeing and that's why I don't spend a lot of time considering the actor angle. It's getting to the point where I can easily spot CGI imagery as it just looks different. It's faded looking, darker, blurred backgrounds and pixelated. Yet, if I try to just pick out one thing to show people, it's difficult. Well, a lot of the Sandy Hook footage was really bad so that was maybe easier than this Boston thing. I think you should make a new video showing some of these things, such as the example above.
Top

Great observations. I think you have uncovered something that no one else has. The perps videos are distinctly darker and consistently so in multiple events. Those videos just do not look right. Its almost as if they were filming from a tv or second hand source. I'm not sure the best way to explain it but there is something too fabricated. The rich color of the prior years marathon pictures looks like real life. The video and picture evidence of the 2013 Boston Marathon bombing looks like a video game. I especially notice how they portray cops as big, fat guys. I doubt that is really how it is. So much great work from you, Simon, and everyone else. I'm so busy with work its hard to spend time investigating but I follow closely. So glad you have posted all of your findings.
Top

Rudy Algera wrote:No facial injuries in any of the pictures? No eyes or ears or noses missing? Only leg injuries? No faces dripping with blood just after the blast?

Well, if the shrapnels/BB's & nails couldn't even puncture baby balloons, perhaps that would explain it, no?

Here we se the three yellow balloons escaping unharmed, from low down in the blast 'epicenter':

Here they are seen flying up to the Heavens:

As for the possible symbolism of those three yellow balloons - I'll let someone else have a go at it.
I don't want to end up sounding like a wacky, tinfoil-hat conspiracy theorist !

Having worked in one way in the past the three balloons made me think of the three pawn shop balls. Maybe the point is to remind us that we are pawns in their game (or so the bastards think...) 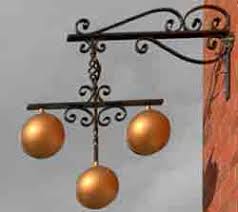