Discussing the most relevant "sequels" or "reminders" of 9/11. The so-called "War On Terror" is a global scam finalized to manipulate this world's population with crass fear-mongering tactics designed to scare you shitless.
Post Reply
First unread post • 64 posts

Wow what are the odds?!

"The New York Times staff photographer Tyler Hicks was nearby when gunmen opened fire at an upscale Nairobi mall, killing at least 39 people in one of the worst terrorist attacks in Kenya’s history. He was able to go inside the mall as the attack unfolded."

I love the shots where the photographers are standing over people in hiding taking their pics;
like, "Dude, we're hiding from the terrorists here..."
Last edited by ninetynine on Sun Sep 22, 2013 7:52 pm, edited 1 time in total.
Top 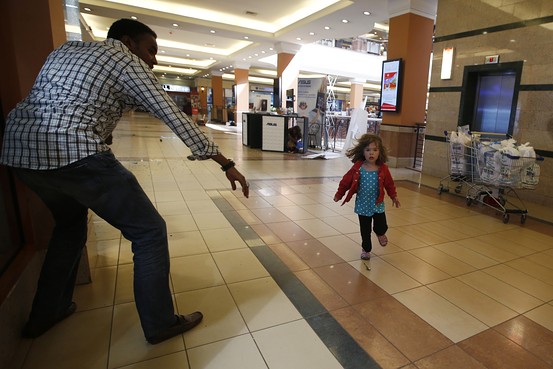 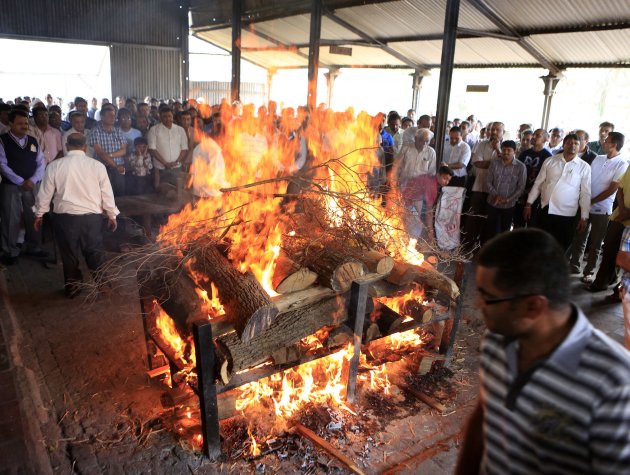 There are also a few examples of blue and white checkers and other patterns, such as:

EDIT TO ADD: In addition to blue and white stripes, I'm starting to notice more and more shades of blue and white in general.
What are the odds that there would be this many people wearing blue, white or blue and white? I've been examining photos and have seen very little in the way of other colors for clothing. We see blues, whites, grays, blacks and browns, plenty of that. But there aren't ever many greens, oranges, yellows, reds, purples, etc to be found anywhere (with a few exceptions). I posit that this is by design. Psychologically speaking, those colors would be distracting to the viewer and the psyoperatives do this specifically to maximize trauma in a manner that forces the subconscious mind to focus on the details they want and not be distracted by other surrounding details. I think it's safe to say that RED is reserved for blood. Combining the softer, duller colors (blues, whites, greys) and earth tones (browns olives, etc) allows the bright color of blood to red stand out more, (or say orange for a fire as another example) in order to achieve the highest shock value possible. Large, bright colors seem to generally be avoided in these psyops for this reason. The photograph must have the highest emotional effect possible and we can't have people sub-consciously distracted by surrounding objects/colors that might result in them looking at other details. There can be no doubt that the drills that are performed come complete with instructions on what the participates should wear (example - no logos), how they should dress style wise, colors, etc. Many times you will see bright colors on a victim (usually a child) so that you'll focus on that area of the photo. Generally, people are wearing dull, non-invasive colors.
Top

I'm especially interested in this person (Daily Mail). Her foot is bright red. Did she step in a bucket of paint? Here she is again in the NY Times, Photo #20. I was not able to find the image URL so I uploaded it to my own account. Original link below.

What's going on here? She's in two different places in these photos. In the second photo, you can see a foot of a very dark skinned man on the right side. There does not appear to be any person with that sandal or whose skin is as dark in the first photo.
Top

It's a small world, after all, apparently. Perhaps this is a household name in the UK? Typically too pat.


Samantha Lewthwaite is 'prime suspect'
Daily Mirror
Two innocent children stand bewildered beside the body of a man gunned down in the Nairobi shopping mall massacre .

The youngsters, one clutching two chocolate bars, were caught up in the atrocity that has left at least 68 dead – including three Brits.

Just yards away explosions and gunfire rang out as Kenyan troops moved from shop to shop in a series of firefights with crazed terrorists and late last night tweeted they had freed most hostages.

And last night it was feared that one of the ringleaders of the bloody attack is a British mother of three.

Fanatical Samantha Lewthwaite , dubbed the White Widow, is a key member of al-Shabaab, the militant group which has claimed responsibility for the slaughter.

The British soldier’s daughter, from Aylesbury, Bucks, is an Islam convert whose husband was one of the suicide bombers in the 7/7 attacks on London.

Unconfirmed sources claimed that 29-year-old Lewthwaite may even be among the masked gun gang still under siege in the Westgate mall last night.

Here's a story from this summer:


A July 7 bomber's widow, suspected of being part of a terror cell, has fled Kenya for Somalia, a top police official has said.

Samantha Lewthwaite, 28, arrived in the East African country last year as part of a group which allegedly planned to bomb the region's coast over Christmas and New Year.

But the mother-of-three, who is said to have been in charge of the plot's finances, is now understood to have crossed the border into Somalia, the Kenyan police officer confirmed.

Lewthwaite was married to King's Cross suicide bomber Jermaine Lindsay, 19, who carried out the most deadly of the July 7 attacks, killing 26 people.

Last week, her father Andy, 56, pleaded for his daughter to contact her family and insisted she would not be embroiled in terrorist activity.

Lewthwaite, originally from Aylesbury, Buckinghamshire, became the focus of police attention after it emerged Kenyan detectives were hunting a woman using several identifies - including hers.

Lewthwaite told The Sun: "I just wish she would get in touch with us."

The builder said he had not seen his daughter for months and that the family had not heard from her for some time.

"Samantha would not be involved in anything to do with terrorism," he said.

"She was badly affected by what happened before and would have nothing to do with it. I am sure of that."

Kenyan officers believe Lewthwaite - who is reportedly travelling with her children - was most recently using the name Natalie Faye Webb and carrying a forged South African passport.

She is believed to have evaded capture when authorities carried out a raid on a group suspected of plotting a terror attack in the coastal town of Mombasa.

Scotland Yard said it had sent a team of officers to Kenya to assist authorities with a terror-related incident.

Lewthwaite converted to Islam at the age of 15 and married Lindsay in 2002 before he blew himself up in July 2005.

As we can presuppose that this psyop is an attempt to strain relations between Muslims/non-Muslims, the showing of the bottom of feet would also be 'cocking a snook' at Muslims as this is considered disrespectful [the pointing/showing of the sole of the foot in the direction of the person looking]. Maybe they are trying to get a nonchalant reaction from Muslims commenting on the photo in front of non-Muslims [who most likely will not be aware of the gesture] thus alienating themselves even more.
Top

do you think it could simply be just more 'pipeline politics'? - The Chinese are all over Africa, especially Kenya, making highways and such and finding 'new' oil reserves, plus, on another note - serving the more-than-one-agenda theme - it's certainly another way into Somalia again!

Also: Would the real White Widow please stand up.

I'm intrigued how they still can't get their digitally created portrait faces and eyes look humane or alive, even for the media role of victims/protagonists/etc. There's always some sort of disquieting deadness about the face and the eyes (especially) that gives it away to anyone paying attention. That 'white lady', for example, seems to be of no particular improvement or advancement over some of the 9/11 digi-faces.
Top http://www.dailymail.co.uk/news/article ... D-day.html
Caption: A woman sobs as she is brought out of the shopping center in a cart after terrorists launched an attack on Saturday

Really? Is she sobbing or laughing?


And, the best actress nominee ... Same girl? Yeah - sure. Evil terrorist "Samantha Lewthwaite" - before and after her facelift, huh?... Good gracious me... how ravingly silly all this is becoming.

But come on now, seriously: White Widow??? What the fuck is this, 1001 Nights? Grimm or Andersen Tales? Fuck this load of bollocks...

The only White Widow I know that exists for sure is a Marijuana brand (fucking good one BTW...)

But come on now, seriously: White Widow??? What the fuck is this, 1001 Nights? Grimm or Andersen Tales? Fuck this load of bollocks...

The only White Widow I know that exists for sure is a Marijuana brand (fucking good one BTW...)

OI! You stole my devastating repartee.

What a load of tripe indeed!
Top This close up is supposed to show the hand of a man killed by the terrorist gunmen. Notice the 'pools of blood'. The fake blood seems to still be in it's plastic coating or bags.

This fairy tale keeps developing like episodes on a TV series. They threw in the White Widow (yes, a good smoke indeed, Hun) and now we have three American teenage gunmen added to the mix to the delight of somber editorial writing stooges all across the country...what a crock...

Does anyone else find it funny that her shirt says "Trainee"? I guess a young crisis actor in training.