brianv 4 Oct 27 2010, 09:53 AM wrote: Martin - it was noticed. It leads nowhere as it was a contrivance. Since there weren't any explosions why would you need to chase a Demolition Company?

As you say, the bus was not exploded - it was demolished.
I'm sure Kingstar would be equipped with heavy-duty circular saws and assorted cutting tools ... But yes - it's still a contrivance I guess. Don't think they beheaded that bus in the middle of Tavistock square !...
http://www.septemberclues.info
Top

brianv 4 Oct 27 2010, 09:53 AM wrote: Martin - it was noticed. It leads nowhere as it was a contrivance. Since there weren't any explosions why would you need to chase a Demolition Company?

As you say, the bus was not exploded - it was demolished.
I'm sure Kingstar would be equipped with heavy-duty circular saws and assorted cutting tools ... :P

But yes - it's still a contrivance I guess. Don't think they beheaded that bus in the middle of Tavistock square !...

I can't imagine them sawing the bus up in Tavistock Sq, Simon. It was most likely a prepared STUNT Bus that was brought into position and fired. Kingstar may have been there as safety advisors, but more likely their insertion was breadcrumbs for the Alex Jewnes brigade.

When we were doing this previously ...nah I'll just show you!

New member joins and points out the Kingstar connection. Jumped on by the freemasonic star huggers, even I got caught up in it.

Tavistock Sq., itself, was fodder for the CT'ers. The Bus "exploded" outside the BMA who had gone against Blair over Iraq, it's walls splattered with blood! The Tavistock institute of Mind Control, The Grand Freemasonic Lodge round the corner. The Ghandi Statue [himself a member of the Inner Temple] up the street.....

brianv 4 Oct 27 2010, 12:03 PM wrote: Kingstar may have been there as safety advisors, but more likely their insertion was breadcrumbs for the Alex Jewnes brigade.


Can't say how Kingstar (of David) is or isn't relevant to the plot, but the van was placed there by set designers whether or not the company was part of the plan. Pete Power slips in a comment about a 'property occupied by Jewish businessmen' in his early morning ITV schpeel. Seems a suggestive remark - why mention it except to lead CTs down Jew Road?

Oh - I'm with you Brian - I wasn't really suggesting the Kingstar van is a smoking gun or something, don't get me wrong.

Btw, kudos for your masterful analysis/observations on the let's roll forum only 3 days after the fact ! I'm certainly a bit of a 'newbie' on 7/7. Please post more of the early discussions about the London terror hoax if you will, it's interesting to read what was debated back then. For instance, were the physics of the bus roof's seamless detachment (popping off like a champagne cork) discussed at the time?...
http://www.septemberclues.info
Top

dont know where i got them, google? theres another 5
in the set but those titles not so blatant. check it out...

Reel. Sorry to jump in so sharply but those cctv "photos" are stills from the televised reconstruction!

Have a look here!

Here's one that's not so well known. Spot the crosshairs!


Unfortunately the bells of the official conspiracy toll louder than the tinkle of the bells of those who try to get the truth to a wider but yet still sleeping audience.
As we know from the research here one of the ‘props’ of both the 9/11 and 7/7 fake narratives is the preponderance of actors and actresses carrying out assigned roles.

Imagined conversation of guy on the right in blue tee shirt on the phone in the foreground of the photo in the first post above from antipodean.
Nah mate, I didn’t get to do the scene on top of the bus. I was one of the street extras. They told me just to look bewildered.
Nah I wasn’t anywhere near Tavistock Square. It was done in a studio.
Yes amazing isn’t, it’s the wonders of modern media simology
Ye we are helping to make the government’s reality. Reality is what they perceive it to be and through them what the public must perceive it to be.

Ye did you see her? I saw her without the mask. I’ll say she’s a bit of all right mate.
She coulda been a bit more convincing though. Mustn’t have had any fake blood.

Didn’t I tell you my new agent is great? I’m off to Afghanistan next week to dress up as an Arab who is part of a group who are supposedly attacking a British base. Helps to convince all those TV owners for whom it’s mandatory to pay the BBC for their regular dose of propaganda that we are fighting a war on terror. Of course today’s events will stiffen the spine of the British public no end. A bold and brilliant strategy just like it says on the bus. Can imagine old Georgie boy patting Tony on the back, up in Scotland saying, “atta a boy Tony, knew you could pull it off”.
What that? Nah, can’t use soldiers this time mate. Remember what happened last time in Iraq when they got arrested.

Anyway cheers mate I’m off to have a drink with the bird in the mask, and give her a bit of counselling after her traumatic experience, heh heh.
Top

Don't they have any other pictures of that bus bombing? It looks ridiculous. Can we compile all the pictures of the bus that people run across and compare them?
Top

What I found interesting in this scene is it look's deserted.

& here is footage from within the BMA building of the bus going past
http://vimeo.com/13329013
Top

Considering how close the bus is to the building, is it not a sublimely stupid oversight on the part of the british brainwashing corporation to not have at least smashed in some of the windows of the red brick building with a hammer before the devastation 'scene' was unveiled to the public?

Bits of bus explode in one direction only ? Another amazing first for the realm of physics and the laws of motion. 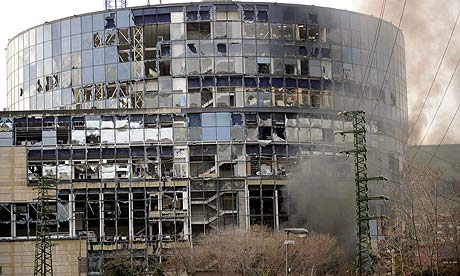 BMA building has a force field around it.
Top

Graham Foulkes, father of 7/7 victim David, told Sky News he had been contacted by the Metropolitan Police who said they had discovered a file containing his phone number and address during the course of their investigations.

He said: "In the last six years I have spent all my efforts focusing on the response of the emergency services, the police and MI5."

Mr Foulkes added: "So to realise that possibly without doubt the darkest point of anybody's life, the thought that the press was listening in to those conversations is beyond description.

"I would like to see News International (publishers of News Of The World) hung, drawn and quartered."

Solicitor Clifford Tibber, who represents some of the 7/7 victims' families, told Sky News: "One of the families who I represent have been told by the team investigating that their phone numbers had turned up during the course of the investigation.

"My thoughts are first of all with the family. It has caused a huge amount of distress to know that the sort of calls they were having to make shortly after the London bombings had been listened to by a journalist.

"It has been a very, very distressing time for them.

The claims fall on the day before the sixth anniversary of the attacks. 
David Foulkes with burnt corner and something on neck picture, and David with photo shopped smoothed over neck area shot.

Considering your son had a very hot terrorist fire bomb end to his life, no other pictures of David which are not burnt at the edges Mr. Foulkes and need retouching?
Top

Pretty astonishing that, as I write this, on the morning of 7/7/2011, there are no "reminders" of 7/7 on the bbc or the telegraph home or uk pages. Is the anniversary not worth remembering? Why the silence? Better not discuss that embarrassing thing?

The clowns styling themselves "The British Police" have finally removed the Group CCTV Photoshop Image from their website...how it stayed up so long beats the hell out of me.

It used to reside at this URL, which now takes you somewhere else on their moron website.

Here it is saved & re-uploaded just days after the now embarrasing hoax.

...and as I have the original, and didn't know about such things at the time [and they didn't either apparently], so I just dropped it in to Gimp a moment ago and lo and behold it has Exif Data...

This is the image Sky News are using on their bullshit victim memorial site, a fucking missing poster!!

Anyone in the UK fancy giving those numbers a call?

And just one last reminder of the ludicrous hoax...

State TV "News" in Ireland ran with this crosshairs version of the image on their bulletins as did others before it was pulled!!
Top
Post Reply
167 posts