It does indeed seem that the "brotherhood" behind these PsyOps are a very close knit.
Top

Yes Simon, it is all very psychologically 'incestuous', isn't it! Homophones and puns are a familiar perp theme too

Looks like they either have very limited imaginations and short memories or it's due to their own unconscious mnemonic associations when creating vicsim names for the same type of "terrorist" hoax.

Then again, maybe they just played Grand Theft Auto video games too much (my son has them, the place names and jokes throughout the 'radio station' soundtrack are really funny)

Per the Urban Dictionary:

A stadium located in the game Grand Theft Auto: Vice City. Rockstar named the building the Hyman Memorial Stadium as a sex joke, obviously enough. However it is unknown if the misspelling of hymen was intentional or not. Regardless, it's still funny the first time you see it.

Major A-List celebrities the world over have the perfect opportunity to expose the lies & deceit of 9/11 & 7/7 on LIVE TV but choose to tow the government line instead, are their acting, singing & sporting etc etc careers really more important than the lives of thousands of innocent victims of the genocide committed in Iraq & Afghanistan.
Top

simonshack wrote:I have been puzzled by this for some time now: is it just pure coincidence that the two most media-hyped, pretty and similar-looking female vicsims of 7/7 and 9/11 ( "Miriam Hyman" and "Liz Wainio") have such homophonic relatives?

No, not pretty. Quoting Elton John after he first saw the movie Titanic:

GET THAT FAT COW OFF THE SCREEN! Jeez, did she take a cue from Rosalie Grable's outfit or what? 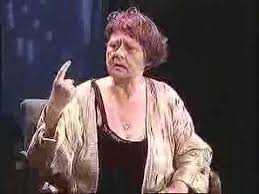 Another thread was asking about the "7/7 truth movement" and if it had any significant presence in the UK anymore. (Or if it ever did).

I am curious. Peeps in the London sphere or at least on that island ... what is going on lately? What's the Beeb saying/doing?
Top

The BBC ran a documentary around June 2009 called Conspiracy Files 7/7 to take on 7/7 conspiracy theorists head on and debunk their ideas. Of course, they only chose to debunk conspiracies implying REAL fatalities, so there was a clever built-in deception contained within the dialogue.
Top Ah well, the Terror movie ad on the side of the bus is not proof of anything
- just pure, happenstance synchronicity, surely ...

But let's take a look at the type and model of London bus which
was supposedly blown up by a terrorist bomb on 7/7 2005. Now here is when it gets interesting: Here we see the "beheaded" bus in the immediate aftermath of the bombing. Remember that we were told by BBC that 13 people died in this bus - and that most of the blast affected the top deck of the bus. The below historical picture truly shows the crude violence of the blast and the almost unbearable pain of the stunned survivors (captured by a swift, lucky photographer) still gathering their senses after the blast. One has what seems like a bad nosebleed. Another blond guy (or girl) has a horrific cascade of blood running down his/her face. The sheer horror of these gory pictures leave us all petrified and disgusted by the vicious cruelty of AL-QUAEDA and their barbaric antics...In fact, the entire World was shocked by this TERROR ATTACK in the city of London!... However, at a closer look, we see that this bus has been "beheaded" with a circular saw. In fact, when you think about it, how did a bomb detach the entire roof of the bus in such a neat, linear fashion? Do you really need to be a bomb expert or a 'rocket scientist' to see how stupid this is?


This other photo shows 4 yellow bars sticking up from the upper bus deck. Unfortunately, the two yellow bars on the left don't seem to exist in the previous pictures.
You may wish to believe that they are obscured by the wounded victims (due to 'perspective issues'). Uh, well - it's all up to you ! It's game over, as far as I'm concerned. Anyone still believing in these "Al-Qaeda attacks" is simply disinformed.

At the 3:50 mark here, we have this eyewitness comment:


One minute this bus, the next moment the whole thing had just literally peeled off like a sardine tin.

After watching many IRA videos on the BBC "On This Day" archive, I find it odd that Tony Blair's immediate reaction was that the attacks were by "Al-Qaeda". I would say 7/7 had all the hallmarks of an IRA attack, based on the videos we were fed throughout the 80s and 90s...

Okay, let's just say 7/7 had all the hallmarks of a BBC attack.

14 days later, Tony Blair had this to say about the 21 July "follow-up" attacks:


I think all I'd like to say is this: that we know why these things are done - they're done to scare people and to frighten them, to make them anxious and worried.

Thanks for your honesty, Prime Minister.
Top

Re:
by pdgalles » March 29th, 2012, 11:17 pm
After watching many IRA videos on the BBC "On This Day" archive, I find it odd that Tony Blair's immediate reaction was that the attacks were by "Al-Qaeda". I would say 7/7 had all the hallmarks of an IRA attack, based on the videos we were fed throughout the 80s and 90s..

If only postboxes could give witness statements! 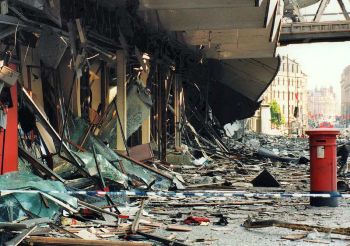 Well, here's the media story - of this July 22 police shooting...

In 2005 Lisa French could not recall seeing a suicide bomber on the bus.

After 2 years of sessions with a government psychologist, she remembered seeing him.

but now she knows he was an asian muslim in a thick jacket with a backpack.

Richard Jones had the same problem on that bus, he saw a man in blue jeans later he described him as wearing brown trousers.
Top

Howie wrote:In 2005 Lisa French could not recall seeing a suicide bomber on the bus.

After 2 years of sessions with a government psychologist, she remembered seeing him.

but now she knows he was an asian muslim in a thick jacket with a backpack.

Richard Jones had the same problem on that bus, he saw a man in blue jeans later he described him as wearing brown trousers.

Dear Howie, welcome to the forum. In your introductory post, you say: "my findings are always backed up with evidence". I'd like to see some of that, as you post your findings in this forum. Please provide sources. Thanks.
Top

I can't find the original BBC report from 2005, I have it saved on a disk somewhere.

Not sure if PC David Rathbands decision to sue the police & committing suicide after an affair with Lisa French are connected.

Re: REQUIRED: Introduce Yourself

Hello. Yet another Brit.

To my chagrin, it was early October 2001 before the penny finally dropped that 9/11 was an Inside Job. The events of that day serving as the casus belli - the "catastrophic and catalyzing event" - the Reichstag Fire Incident - the military pretext - for imperialistic land and mineral grabs by the Anglo-American fascist financier oligarchy. Grabs which are ongoing more than a decade later.

Since 2001 it has been a long journey of discovery. For some years I was a believer in the bogus drone theory, courtesy of spooks "Jo Vialls" and Andreas von Buelow.

But then we got the Gladio-style London Transport Bombings of July 7 2005. The photoshots of that fake terror operation were pure bunkum. They immediately re-focussed the attention on the imagery itself. And the likelihood that there were no genuine victims. The whole thing was staged using the cover of a "terror training exercise".

Those photos from 7/7 are still etched in my mind. One image captured the impossibly localised blood-spattering to the door jambs of the British Medical Association in Tavistock Square, site of the alleged bus bombing. 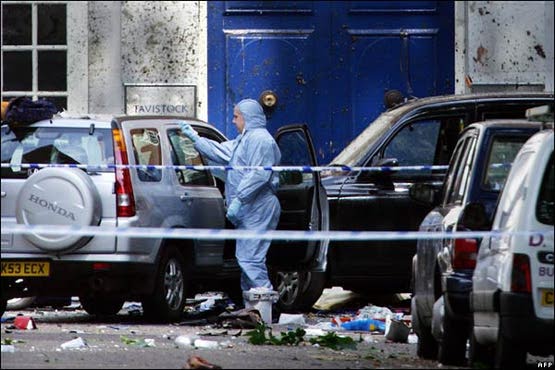 A deeply symbolic image which served to incriminate "the Jews". According to tradition, splashing the Blood of Atonement about a doorway is an important custom of the Passover. The Blood ensures the Angel of Death will pass by the house. Exodus 12:7 and Hebrews 11:28

Must be the Jewish doctors wot done it then. Bang to rights. It says so in the Torah, after all!

The mysterious 'egg-cutter slicing' of the bus roof, also sounded the alarm bells.

Then there were those ridiculous images of stiff-upper-lipped bus bomb vicsims, captured casually walking down the bus aisle just seconds after the alleged blast. Dusting off their pinstriped suits as they did so. Such decorum has the English gent! 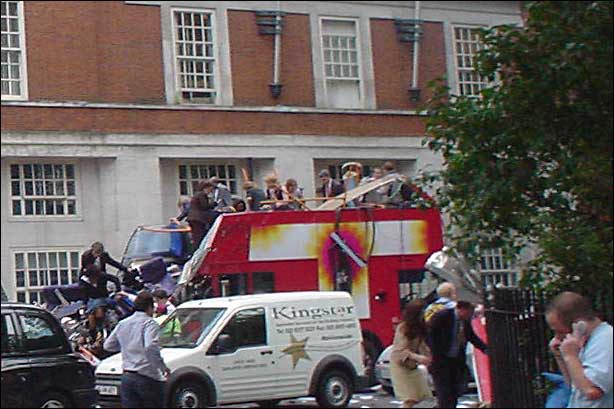 And then Simon and team opened up one of the most important windows in the Advent Calendar of 911 discovery - the image fakery. And thank you for that. Precious few of us have experience in identifying video and image fakery. For steering public opinion, imagery is so crucial to the criminal ruling class.

In comparison to 9/11 and 7/7, the other hoax-busting material on this forum is light entertainment. The faked lunar landings are a particular favourite, a fraud suitable for all ages, young and old alike. More recently, the "Breivik" fairytale must be drawing in the readers, hence the high shill factor for contributions there.

Anyway, whilst remaining a lurker, I do hope to contribute at some point to your amazing work

Re: REQUIRED: Introduce Yourself

With that intro, I look forward to seeing more from you

Just expressing a fresh insight on a subject can be very helpful too.
Top
Post Reply
167 posts