She sure likes a red blouse.

NASA Astro-NOT liar and fraudster Mark Kelley (Gifford's husband) is in the news again today. Apparently, he was denied purchase of an AR-15 when the Tucson area gun store owner realized that the purchase was made specifically for political reasons (after discovering Kelley's politically charged Facebook post).

While Kelley and his lying wife masquerade all over the country on speaking tours and drumming up public support for their gun grabbing agenda, here's a look at Kelley on the beach in Laguna, California with his dog.

Kelley and Giffords started a gun control advocacy group, Americans for Responsible Solutions, which is laughable considering how irresponsible he is with his own dog.

It's nice to know that this man is working hard to take away our right to defend ourselves from his Pitbull. He clearly can’t handle owning a dog, which means he certainly can’t handle owning the AR-15 he attempted to make a straw man purchase of, just to send a message to leftists like himself. Liars like Kelley truly believe that they are incapable of owning guns safely (which is true in his case), so they assume that everyone else in the country is as mentally unstable and incompetent as they are .... Being a former Californian, I can assure you this incident is a crime. Will Kelley be confronted/charged/prosecuted about this incident on the beach? More astronots behaving badly.

From Gabby's facebook page: "Mark and I stopped by the Spaulding Rehab Hospital in Boston today to visit with victims of the marathon bombing. We met remarkable profiles in courage. This weekend, we take inspiration from Beth Roche and Celeste Corcoran. Keep fighting!"

What a sick joke this whole Giffords affair is. Yes, let's give the JFK Profile in Courage Award to ... wait for it ...

someone who was shot in the head just like he was? 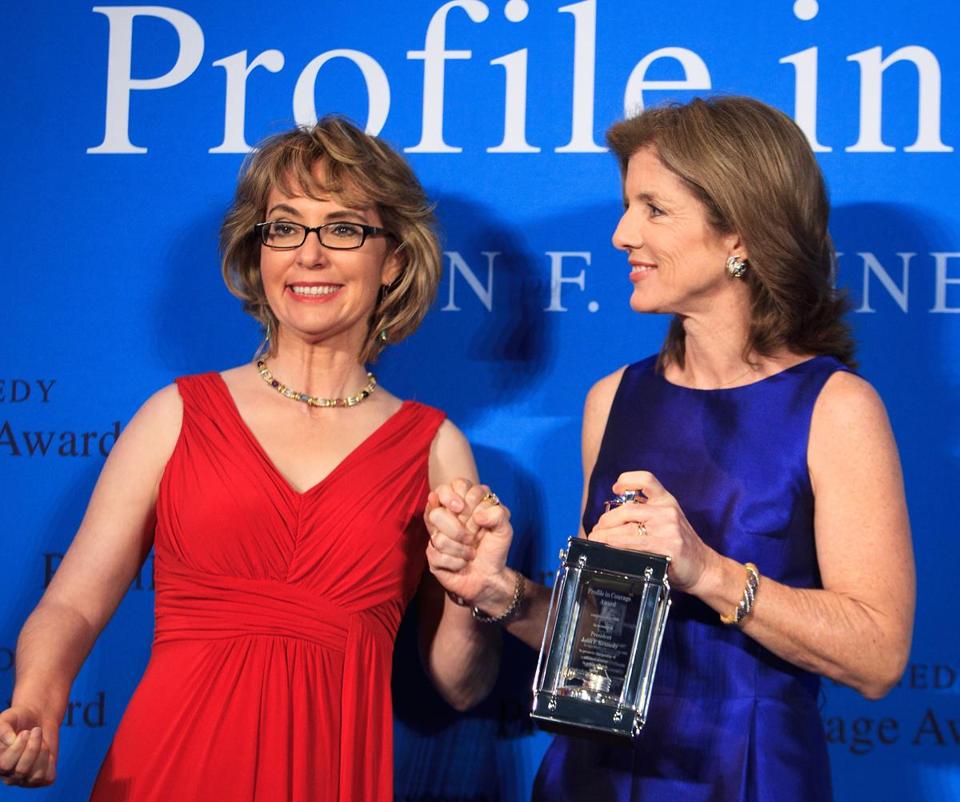 "Gabrielle Giffords, who left Congress to focus on her recovery after being shot in the head, was honored with the John F. Kennedy Profile in Courage Award Sunday in Boston by Caroline Kennedy ."

And of course she's wearing red, as usual.

Like hands and shadows, necks seem to be a problem...

Yay!! We have money moving against guns!!

And we're wearing red yet again! Neither of these photos look like the persona representing Gabby in all of these "live" photos.

They're pushing the meme about the CT nuts through the Loughner/Gifford hoaxathon. Loughner, like the Uber driver in Kalamazoo, files a HOAX lawsuit (yeah, pot meet kettle!):

Loughner claims the government put a chip in his head to control his mind, and that Giffords was not actually shot. Instead, he claims she is part of a "global plot to take away our civil liberties" and it was all an act she learned by watching Ronald Reagan movies.

He also refers to "the Illuminati," which he claims Giffords is a member of, and says he is being subjected to "microwave testing" and waterboarding "on defendant's direct orders."

He also writes in his complaint about the food in prison and that he has no access to National Public Radio or CSPAN.
Top

It should be mentioned that former MLB GM and manager Dallas Green died this week, inexplicable member of this greater conspiracy with his professed granddaughter. I didn't catch any references to this event in his eulogies, but I could have missed them. You'd think they'd not let an opportunity to get it back in the news go by.

I did not notice this language choice at the time:


Christina-Taylor, the granddaughter of former Phillies manager Dallas Green, was taken to Giffords' informal town hall meeting by a neighbor who was considered her pseudo-aunt, said her mother.

Maybe it's because he actually died unexpectedly and the usual mechanisms of propaganda hadn't been in place for the moment. If they felt no awkwardness about it, anyway. Though knowing how history "goes down" we can be sure the PsyOp will be tied to this figure.
Top

Well "new footage" revealed this week, if anyone wants to dissect it:


TUCSON, Ariz. -- The FBI has released some new photos, video and documents from its investigation of the January 2011 shooting in Tucson that left six people dead and 13 severely wounded, including former U.S. Rep. Gabby Giffords. Giffords was the target of a lone gunman at the meet-and-greet event outside a supermarket and was left partially paralyzed.

CBS Tucson affiliate KOLD-TV reports that one of the pictures released shows Pima County Sheriff's deputies holding gunman Jared Loughner on the ground by a blood-stained notebook following the shooting, although their faces are blacked out.

KOLD-TV says the items span the minutes before the shooting through those immediately after.

Another TV station says a surveillance video shows a hooded Loughner walking though the store before the shooting.

[Admin Notice by SCS: TEDtalks has become a “god” of silly science to be sure. That said, after seeing Simon’s reply, I decided this was the more specifically appropriate topic to place it in.]

TEDtalks is a yearly conference of 5 days consisting of about 70 speakers. Cost $8,500 to attend the conference. Most speakers are given about 18 minutes. How much real thinking and fully formed thoughts can be communicated in this short time span? Like our current state of science I would suggest that TEDtalks placates the public into thinking we are at the height of learning. After viewing a TEDtalk one might get the feeling that others are handling the needs of this world, so don’t worry, don’t try to bother your intellect by figuring anything out. Science is getting it all figured out for you.

The YouTube channel for TEDx hosts over 90,000 videos of TEDtalks. With all that so-called brilliance for viewing, one would think big changes were happening. Oh but wait, they are. The following is a good example. The information Al Gore was presenting in a TEDtalk led to the movie ‘An Inconvenient Truth’ (2006) which warned us all about the disastrous and imminent dangers of global warming from carbon emissions. That movie made possible many legislative changes to emission standards that benefitted the most wealthy. Not only are people placated by TEDtalks but is seems people are also manipulated by fear.

There is so much more to say about the disasters of TEDtalks, brought to you since 1986, and how they hypnotize the learned community, could be a thread of its own.

When I saw this post, I simply had to retrieve this pitiful bit from a Tedtalks featuring Gabby and Captain Astronut Kelly. I recall a family member asking me something like, “what’s wrong with Tedtalks?” I grinned and brought this video up for them to see. This particular family member is aware of media fakery, and will privately admit to it and sometimes even laugh about it.

When he saw the part I’m linking below, he did a face palm and was like, “well, I’m glad I didn’t spend much time on TEDtalks- what a joke. . .”

I recommend skipping straight to the 11:21 mark for the absurd reference to “the real skull,” which is naturally stored in the freezer.