nonhocapito wrote: Verifying whether the boat is really there seems to me a pretty important step, in order to move forward with the investigation -- and showing a bit of support wouldn't hurt.

Nonho, I support you in every single thing you do - as I believe you had already figured out. My questioning of a psyop does NOT indicate a lack of support for your investigation. Please.

So seeing a boat in this case doesn't mean it's the boat described in the Giglio Event.
Top

Isola del Giglio is a pretty little rocky place and the spagetti vongole + white wine + bread + coffee in the port together with Simon were good. I have changed my opinion about the case and report about it at http://heiwaco.tripod.com/news8.htm .
It seems the Master didn't just kiss the Isola del Giglio, he also amputated or castrated his own ship of some important members.

Anyway, I consider the Master innocent of manslaughter, etc. His part of the show was an accident.

But the case is evidently not closed why the ship ended up among the lilies and rocks.

Heiwa, taking your picture above (and also utilising your nautical expertise)....

....is it just a perspective illusion that is making the 'Concordia' appear to lose it's funnel and radar/sat dome in this lower picture, with the police divers?? Why can't I see them, in the top-left of this picture beside/behind the mast? 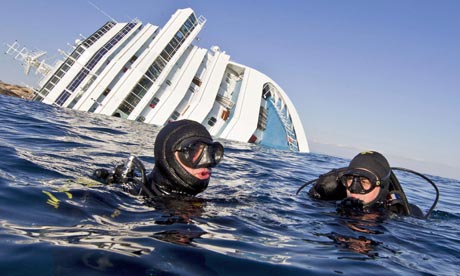 Because I'd have thought that there's so much of the blue fore-deck visible, this picture has to have been taken from a vantage point that shouldn't be obscuring the funnel....would you not agree that the amount of fore-deck visible suggests that we can't be seeing this from much 'below' the plane of the main deck (if the attitude of the ship were normal /untipped...?)

Also, this may have been what the Carabinieri are meant to have been viewing underwater...

....James Cameron would have been proud of such a shot. But...within the bell hollow...is that the reflective surface of a water/air transition? This bell contains a lot of air, which hasn't been displaced. Is that odd?
Last edited by icarusinbound on Sat Jan 21, 2012 12:52 pm, edited 2 times in total.
Top

icarusinbound wrote:
....is it just a perspective illusion that is making the 'Concordia' appear to lose it's funnel and radar/sat dome in this lower picture, with the police divers?? Why can't I see them, in the top-left of this picture beside/behind the mast?

It's just a perspective issue. The ship is really quite impressively long. Hold on, I'm about to post my own photos I snapped yesterday! I promise they aren't fake/manipulated !

...so if the ship is really *there, the whole story gets pretty boring. Where are the shack-videos and photos ?
Maybe *now the story was trumanIzed for sep|clues ; anyway, still interesting work here ;
Top

ewing2001 wrote:...so if the ship is really *there, the whole story gets pretty boring. Where are the shack-videos and photos ?
Maybe *now the story was trumanIzed for sep|clues ; anyway, still interesting work here ;

No, no, no! The story is extremely interesting!! 4 200 shipwrecked persons arrived at night/morning 13/14 January to the main harbor of Giglio island, were transported by bus to a village 5.7 km away on top of the island for R&R and then returned by bus to the main harbor and shipped off to the mainland and flown home ... without luggage, clothes, money, keys, IDs, passports, credit cards, etc.

The Costa Cruises liability (P&I) insurance companies, or clubs, The Standard Club and The Steamship Mutual Club must be very happy with such a passenger ship client like Costa Cruises. After the biggest ship disaster in the 21st Century 99% of the 4 300+ passengers and crew involved were safely home in a few days.

It is very strange that all newspapers and TV stations do not report of these lucky endings of the incident due to good safety at sea but accuse the Master of manslaughter, wining and dining, entertaining young blondes, etc, causing the death of 7, 11 or ?? persons.

Or it is simple! Media just focus on the big ship wreck on the rocks - it is impressive - and does not look into what happened on the island - who cares?
Top

So Heiwa and I arrived (by ferryboat) in Giglio island at about 10:30 AM yesterday morning - Friday20Jan, 2012 - a week after the event. It was a splendid sunny day. Very few folks on the ferry - only a handful of people (a few TV people from Spain and France). Here's the impressive sight of the Concordia from the ferry as we approached the beatiful little island - and a few more shots I snapped as we sailed past it while entering the little port of Giglio: As we entered the lovely little port I immediately spotted a restaurant(as the incurable gourmet that I am) which had the added value of providing a most ideal, 'grandstand' view of the wrecked Concordia ship. I decided Heiwa and I should have lunch there! Alas, as we later entered the 'restaurant', all the chairs and tables were amassed in one corner - and the whole place looked more like a film/TV set! What a let-down! In fact, the whole port looked more like a TV/film set, what with the various TV crews and cameras lined up on the docks...

...and with the media people taking turns at interviewing elegantly uniformed officials/admirals - proudly recounting at length what apparently had been a roaring success - "the unprecedented rescue operation of 4200 people" ( I actually managed to record with my dictaphone this guy's speech - see photo below). Not ONCE did he mention the alleged 11 victims - nor the alleged 22 still missing passengers...) : So what about, you may ask, the RESCUE operation? The RESCUE crews? Wasn't there frantic activity, both in the little Giglio port and around the ship wreck - considering 22 people are still missing - and to secure the ship which risks (as per official accounts and phony weather reports constantly predicting - since many days now - unforthcoming "sea storms"), to slide down in deeper waters any minute?

Nope. Not much at all, in fact. In a corner of the little port, there was a guarded, off-limits area with a few tents, with an assorted bunch of seemingly idle policemen/carabinieris/military people/firefighters/Guardia di Finanza officials and the like: Here's the entrance of the ringed-off/off-limits area: The most conspicuous/numerous (and totally idle) 'rescue-workers' were made up of a rather large contingent of "Vigili del Fuoco" (firefighters). Yet, the firefighters were clearly just hanging around - and certainly not involved with any sea-rescue operations :

Meanwhile, out by the CONCORDIA ship wreck - one of the major shipping incidents of modern history... ...here is the most 'frantic activity' I witnessed on the day: To be continued...
Top

Lots of thanks to Heiwa & Simon.

This Concordia case is indeed a very strange one...
Top

Nice one guys! Great to see some real photos on the site for a change!

[ wiki : Isola del Giglio is connected to Tuscany by ferries Toremar and Maregiglio ]

Did you speak to anyone about the "passengers" aspect of it Simon? How they managed to get them all away so promptly!

"On 13 January 2012, the cruise liner Costa Concordia ran aground just off the island shore. Most of the more than 4,200 passengers and crew were rescued and taken to the island, as well as to the mainland. At least 11 people died and 64 were injured, with 20 or more missing (as of 17 January 2012)" wiki/Isola_del_Giglio who cite some well known british liars as their source of information.
Top

Heiwa and Simon: thanks for all. Sorry I couldn't join as I was sick last week.
This indeed seems a real thing, even if too many circumstances sound too much ridiculous.

Edit:
By the way: could you see if the big rock was really stuck there in the ship?
Top

Dear Heiwa, when you find the time, can you please comment on this previous post of mine: http://cluesforum.info/viewtopic.php?p=2364489#p2364489 about the boulder stuck in the ship? Thanks!

I@N: you can see the rock in the first picture posted by Simon. This makes me even more interested in understanding if that rock looks legit at all, and whether it could have been stuck there on purpose much in advance.
Top

So seeing a boat in this case doesn't mean it's the boat described in the Giglio Event.