It seems the perps could have planted stories under the Marie Colvin byline, so as to reinforce the identity of this future vicsim or actress. For example:

Marie Colvin reported in the Times of London this weekend about the intense fighting in Mosul between an amalgam of US and Iraqi forces...

But we begin with Marie Colvin, foreign affairs editor for the Sunday Times of London. She joins us now by phone from a hotel in Gaza. ...

By Marie Colvin To the outside world it seems astounding that Saddam Hussein has not taken the opportunity to survive.

"The Faces of Arafat" was produced by [MARIE COLVIN], a Long Island-born reporter for the Sunday Times of London, who has covered the 60-year-old PLO leader

* Chicago Sun-Times - ‎15 Apr 1986
‎
United Press International correspondent Marie Colvin, who was in the consulate of the British representative to Tripoli when the bombing started

Also, (and I will find links later to demonstrate this), Marie's editor when she lost her eye - in 2001 in Sri Lanka, was Sean Ryan, who to this day continues in the role as foreign affairs editor at The Sunday Times. He is a foreign languages graduate of Oxford University.

Let us look at The Sunday Times editorship of the recent past:

Okay, so I think it's worthy of note, that both John Witherow (editor) and Sean Ryan (foreign affairs editor) have been at The Sunday Times for a long time now.
Top

A few more oddities to add to the "Colvin Mystery":

1. Her mother says Marie will be buried in Syria.

2. A high-profile "Syrian activist" posts a video of the burial taking place.

3. Polish diplomats then claim to have escorted the body to Charles de Gaulle Airport in Paris.

4. Plans are announced for Colvin to be buried in Oyster Bay, New York.

5. Colvin is mourned as a "fearless" and "faithful" longtime friend by, wait for it.... the nefarious NeoCon warmongstress JUDITH MILLER!!!, who more than any other mainstream journalist (aka CIA/Mossad asset) has indelible blood on her hands for her key propagandist role leading to the deaths of hundreds of thousands of Iraqis.

Birds of a feather, perhaps?

Can anyone ID the city/rotunda building/bridge/river perspective in the background? I've spent an hour or so considering Paris, DC, St Petersburg, and I'm stumped.

I'm always amazed at how few perp photos have exif data. I guess I wouldn't want my name on this fake looking shit either!

That appears to be at the bar/restaurant overlook at the Oxo tower, and the picture has to be pre 2003, as that is when 160 Queen Victoria Street was built, which is not visible in the picture. Kentrailer: we have already discussed and exposed the blackfriars picture and its variations, please read the previous page of this thread. The alleged date for the picture has also been found to be an incredible 2001.

However, I have to disagree with you: the POV cannot be the OXO, because the bridge is seen too frontally.

Instead, we have to imagine a POV further down the bridge, possibly at the IBM offices or the Television centre.

Of course, this dispute is entirely theoretical because the background and the foreground do not belong to the same picture, as the shadows clearly show. Hence the background has been photographed independently -- possibly from the offices I mentioned, but it matters little -- and then artificially unfocused, cropped, resized, aged, and composited with the fake "Marie Colvin" in the foreground.

There is one issue still open that i am most curious about to pinpoint exactly if and when the bridge was being repainted in 2001, as the forged picture wants to document. I'm hoping one of our members based in London will be able to find out more about this.
Top

In this top photo, we are presented with a very petite woman, with narrow shoulders...

... and here, we're presented with a woman whose shoulders appear to be broader than all the men in the photo! Her torso is certainly as long if not longer than the men to her left. And, if she's wearing what appears to be a standard oxford shirt, why doesn't the collar protrude past her vest? Additionally, her left hand appears to be of a different race. Perhaps the book she holds hides a sloppy caucasian-head-on-arab-neck join. 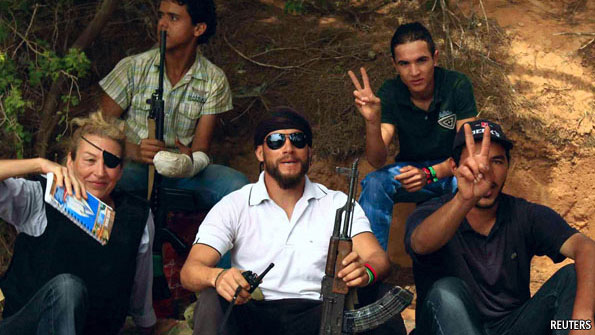 Charlize Theron set to make a movie based on Marie Colvin.

"Charlize Theron (“Prometheus”) and “Clash of the Titans” producer Basil Iwanyk are developing a film based on war journalist Marie Colvin, who died in Syria this year.

Theron, who may or may not play Colvin, joined with the prolific producer to obtain the rights to a Vanity Fair article called “Marie Colvin’s Private War,” says THR (The Hollywood Reporter)

A search for a writer to adapt the piece written by Marie Brenner is underway. (Brenner also wrote the article that became the 1999 Michael Mann movie 'The Insider'.)

Colvin died in February while covering the civil war in Syria. She was a world reknowned American war correspondent who wrote for the British paper The Sunday Times, covering wars and conflicts from Kosovo and Chechnya to East Timor and Sri Lanka — where she lost an eye.

Colvin specialized in Middle East affairs and was covering the Syrian uprising in a building that was being shelled by the Syrian Army when she died at age 56.

Colvin was known for her brash style and fought to bring attention to the inhuman and blood-spilling scenes she was seeing. She also endured three divorces and post-traumatic stress disorder all in a careeer that made one of the most important war journalists in the field.

Iwanyk, who also produced “The Town”, is planning to make a classy drama in the vein of the Ben Affleck feature.