Anything on the news and elsewhere in the media with evidence of digital manipulation, bogus story-lines and propaganda
Post Reply
First unread post • 98 posts

I think this one's worthy of its own thread.

Well we may as well start with some vicsims:
http://i.telegraph.co.uk/multimedia/arc ... 80082b.jpg

I agree with this video poster who claims the bodies are articulated crash test dummies:
https://www.youtube.com/watch?v=XWQvJScXO2s


Coincidental story of Malaysian woman with loved-ones on both Malaysian crashes:

The TWA 800 was the story about a 747 Boeing which allegedly fell out of the sky on July 17, 1996.
It was believed to have been shot down by a surface-to-air missile - (according to 250 witness accounts).

"Malaysia Airlines Flight 17 (MH17/MAS17) was a scheduled international passenger flight from Amsterdam to Kuala Lumpur that crashed on 17 July 2014; it is believed to have been shot down with a surface-to-air missile."
http://en.wikipedia.org/wiki/Malaysia_A ... _Flight_17


It seems a fake!

According an Italian blogger, they used the other missing Malaysian B777

Here is the English Translation:

As usual, passports were found intact!

According a Russian newspaper, they used dead bodies simulating the passengers...

Here is the english Translation:


My favorite "amateur video" of the "Flight MH17" mushroom cloud - being discussed on TV by the media experts...

One may wonder : was this videographer just filming this barren scenery by pure chance, just before the smoke cloud appeared on the horizon? Or did he/she point the camera in that direction after seeing the smoke trail of the plummeting / missile-stricken plane? If so, where's that smoke trail?

Well, whatever they are - I doubt they are real corpses of a real plane crash... And... what are the odds for two alleged air-tragedies involving suspected surface-to-air missiles to occur at EXACTLY 18 years from each other?

"Malaysia Airlines Flight 17 (MH17/MAS17) was a scheduled international passenger flight from Amsterdam to Kuala Lumpur that crashed on 17 July 2014; it is believed to have been shot down with a surface-to-air missile."
http://en.wikipedia.org/wiki/Malaysia_A ... _Flight_17

More to the point, perhaps, what does this "extraordinary coincidence" tell us about the bigger picture - and may it help to sway (for instance) die-hard "cold-war-believers" away from the risible notion of rivalry between this planet's superpowers?
Top

^
No. This is what a real plane crash looks like 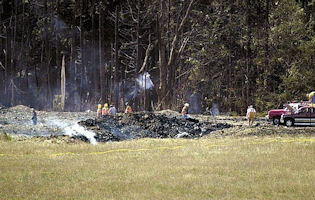 Edit to add: my kids were laughing about the pair of Birkenstocks landing together and the underwear still folded...
Last edited by ninetynine on Sun Jul 20, 2014 4:51 pm, edited 1 time in total.
Top

You could beat a pilot over the head and hijack the airplane with a sausage like that! We had trouble taking cough medicine for the kids on an airplane recently. Aren't there regulations about taking packaged meat abroad? From the biggest Islamic Nation in the world too?

Tony Bliar will be calling for a ban on taking giant Polish sausages on airplanes.
Top I don't know if they are saying with this saying, but I found it ironic they have a bag that says "Rituals" anyways there are a lot of strange pictures and of course from the daily mail this is a strange story. They are saying that rebels have taken over the site and aren't letting anyone in to take photos now. Not even investigators. The media line now is "we may never know what happened."

Two other things I've noticed. The vicsim stuff is a little more sophisticated - they can't get away with just 1 or 2 photos anymore. I'm looking at the Canadian vicsim (since I'm Canadian) and noticing it looks like they're using the same techniques, but there are two basic facial expressions now instead of just one. Allowing them to generate a few more photos. The other thing I've noticed is that they're not making a big deal out of vicsims like they did with 9/11. They're not lionized, I had to Google this guy because despite being the only victim from this country they're not being loud about his name and identity and background. No portraits of a vicsim on the 6 o'clock or anything like that.

That being said, for Internet users, the media has provided quite a bit of backstory in an awful hurry for this guy. But sloppily. They're all using a photo from his "Facebook account" which apparently didn't exist until after the crash. This is a 24 year old Canadian - it's unusual for a person like him not to have a social media presence.

I wonder if it's even worth digging into at this point, though.
Top

Yet another amazing coincidence!

Two of the 28 Australians killed when MH17 was shot down over Ukraine were members of a family who lost two other relatives when Malaysia Airlines flight MH370 disappeared in March, it has emerged.

OpticalIllusion wrote:I don't know if they are saying with this saying, but I found it ironic they have a bag that says "Rituals" anyways there are a lot of strange pictures and of course from the daily mail this is a strange story.

I don't know if you are aware that "rituals" is a cosmetic shop. http://eu.rituals.com/nl-be/home
It looks like a bag that my wife has. I am not saying it isn't ironic.
(what coincidences eh BV!)
Top

martinvrijland.nl a Dutch "conspiracy" site that is investigating the plane crash psyop went offline in the last couple of hours.
How convenient!


It's not just you! http://martinvrijland.nl looks down from here.

The author is exposing local media fakery and their simulated victims.

Edit: Site is now back online. Just to give 1 example of the man's thinking: "The official story is that the missile caused the fuel tank of the airplane to explode in the air. But they also want us to believe there was an explosion on the ground. But there was nothing left to explode. You can't have it both ways."
Last edited by Seneca on Sun Jul 20, 2014 1:47 pm, edited 1 time in total.
Top

Strange shadows, or is this just perspective foreshortning, as viewed? Some of the walkers to the rear have an added applique feel to them, there is some floating-foot going on. Note the smoke-point on the horizon, to the right of omnipresent biking grandpa, and to the left of the wreckage. Inserted, or is the ELA pixellation just a meaningless process artifact? The transition horizon, ground/trees, in the far right as viewed, is as very sharp as it is horizontal (cf the left and central horizons.
Top

icarusinbound wrote:The transition horizon, ground/trees, in the far right as viewed, is as very sharp as it is horizontal (cf the left and central horizons.

You're right. Don't they have hills in Ukraine? That photo could have been taken in Holland or Belgium.
Top

Nice analysis of the discrepancies in the backgrounds of various shots:
https://www.youtube.com/watch?v=yer6Ndrgauc


And just for you guys, presenting the new Ingeborg Lariby, Fatima Dyczynski:

Here is the corporate website of the company she founded, Xoterra Space:
http://www.xoterraspace.com/

and here she is at a Ted Talk speaking about what her company does: personal nano-satellite technology:
https://www.youtube.com/watch?v=VEbLvhRLwPo

She was planning to take her team to Beijiing for a space conference in September to pitch her idea:
https://www.youtube.com/watch?v=O4WQRln6dJI