Anything on the news and elsewhere in the media with evidence of digital manipulation, bogus story-lines and propaganda
Post Reply
First unread post • 5 posts • Page 1 of 1

This video just posted on you tube demolishes any possible doubt that this is faked news.

It was a staged event and the videos, supposedly closed captioned security footage, prove that they used CGI to insert car crash victims into the footage.


I actually saw footage where a vicsim,., had both legs run over by the car at high speed and immediately stood up as if the car was made of Lego. Some how this video shows a guy following the path of the "runaway" car , passing numerous "victims" of the "carnage" but does not show a single drop of blood.

The person who posted the first video goes by the name of Anaconda Malt Liquor, and I've watched many of his videos exposing media fakery.

I would say, next to Simon, he is the best at breaking down videos that I've ever seen.

It would be disturbing if it was real, (why would someone mow down dozens of pedestrians in Times Square?) and is even more disturbing to know that someone actually went to the trouble to fake this type of depraved behaviour and try to pass it off as real. My brain hurts trying to figure out the possible motivations of those behind the fakery psyops.

Re: Times Square- do you see what I see?

I 'like' the marshalls in the red/orange hats and bibs/t-shirts...very subtle...who seem to be the ones being aimed at and who seem to 'rally' together after the car crashes through and impacts the bollards.
Seems that the car also launches out of some scaffolded walkway which I am sure had some restricted access at some time or other prior to the 'event'.
Love the random videography of the point of impact too...

omaxsteve » Today, 09:22 wrote:I actually saw footage where a vicsim,., had both legs run over by the car at high speed and immediately stood up as if the car was made of Lego. Some how this video shows a guy following the path of the "runaway" car , passing numerous "victims" of the "carnage" but does not show a single drop of blood.

In the video below, the person standing up after the car just ran over his legs is clearly visible (~0:50):

This whole event is fake as the day is long... my question is, who are these people filming CCTV footage from computer screens? This is the new vehicle (pardon the pun) for fakery, apparently... As explained for previous events, the reasons to me are obvious: 1) if the media officially acquires this footage, they are responsible for its veracity. If "someone" films it off a screen and spills it onto the internet, nobody is accountable, neither the security company nor the media; 2) the undeniable high-quality of today CCTV cameras needs to be taken down a notch when fakery is involved, and this is certainly the best way to do it.

The girl stopping against the pole shadow is certainly hard to explain. But also the car continuing its course with an entire human body under it.
I think the body under the car is vicsim "Alyssa Elsman" (A.K.A "Analyse Slams" - and more) from Portage, Michigan (1 Dead and 22 Injured is the official count, NYT). The vicsim is presented in this video: https://www.youtube.com/watch?v=W8Xs3-EG-lE

This CCTV camera even says "from ISIS" (Yeah I know, it says 1515, and ISIS is not even supposed to be behind this. But psychological manipulation works in twisted ways...) 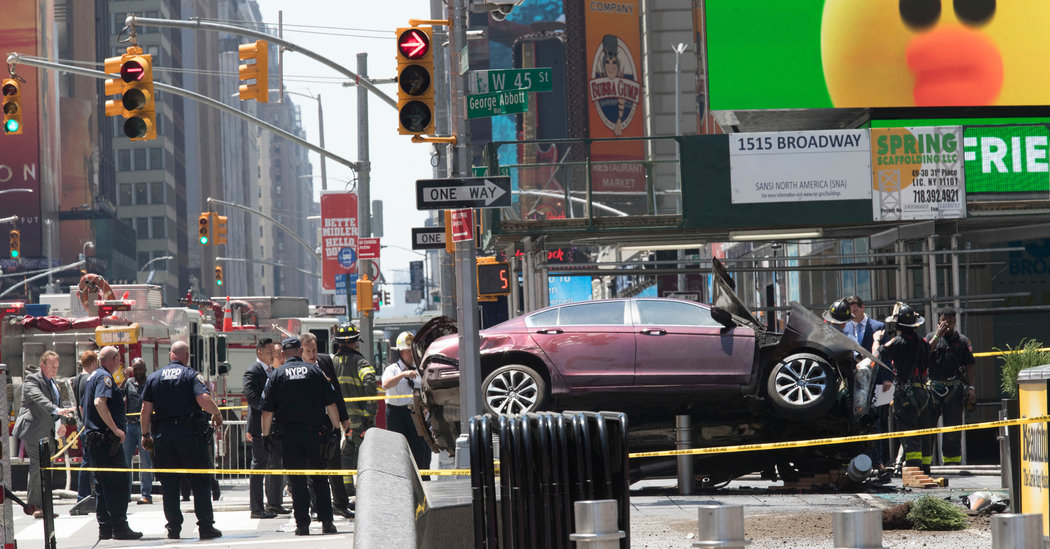 In this NYT juxtaposition (see article linked above), the best thing between the mayor and the posing crowd must be minnie mouse:

Although the price for best picture must go to this one:

"Richard Rojas" (and "Alyssa Elsman"... the usual assonant names) moments before his apprehension. From http://www.theaustralian.com.au/busines ... 1495281258
You do not have the required permissions to view the files attached to this post.
Top

In the first video you posted nonhocapito, Russianvids used the same footage to show a guy coming out from behind the fire engine/parked car with a camera on his back and he takes one of those "iconic" photos of Rojas coming at him looking scary and then he just fades off into the crowd. Watch at about the 00:40 mark upper left corner.

There was also a story out yesterday about some guy trying to break into the cockpit of a Hawaiian airliner. Must keep 9/11 in people's minds any way you can. Great catch on the 1515/ISIS propaganda.
Top

Since 2009, vehicular traffic has been banned at Times Square between 47th and 42nd Streets,

https://en.m.wikipedia.org/wiki/Broadway_(Manhattan)
I note that broadway is 33miles long and is also known as route '9' according to blurb in wiki-d
Top
Post Reply
5 posts • Page 1 of 1