Anything on the news and elsewhere in the media with evidence of digital manipulation, bogus story-lines and propaganda
Post Reply
First unread post • 39 posts


I tend to stay away from political matters - even though I have always kept a vivid interest in all the going ons on this planet.
I fled from the 'Israel' thread opened on this forum as I just don't think it was aptly named...

But I woke up this morning with, for some reason, a question ringing in my head. "Who was the foremost "Arab terrorist" before the emergence of Bin Ladin?" (make no mistake, "Bin Ladin" is the preferred western spelling according to his brother Yeslam). While I had breakfast, a name popped back in my mind: "Abu Nidal". I suddenly remembered he was the most feared "muslim terrorist" in my innocent youth, at a time when I believed just about everything I read in the newspapers...

So with a few hours of googling, I dug up these tidbits of information - or perhaps I should always put "information" in quotes. However, here goes :

-Abu Nidal's first operation: September 5, 1973, using the name Al-Iqab (The Punishment), seized the Saudi embassy in Paris, taking 11 hostages and threatened to blow up the building.

-Abu Nidal, together with Abu Daoud ( later involved in the 1972 Black September kidnapping and killing of 11 Israeli athletes at the Olympic Village in Munich) called for Arafat to be overthrown as an enemy of the Palestinian people.

- Abu Nidal's father, according to his brother, was "the richest man in Palestine and a close friend of Avraham Shapira, one of the founders of Hashomer, the Jewish self-defense organization and of Dr. Weizmann [later the first president of Israel]".

- Abu Nidal was, we were told, an extremely secretive, reclusve and elusive personnage, so much so that his very existence was oft questioned.

Then I learned that "ABU NIDAL" means "father of Nidal".
So I thought: What does "BIN LADIN" mean? It means "son of Ladin".

Wow. I almost spilled my precious morning coffee. This was getting interesting!
This must be some kind of lame "Mel Brooks-style" Jewish joke / wordplay. 
Now, it so happens that several researchers have provided serious indications that Abu Nidal was a Mossad agent.
Patrick Seale (a British journalist and author who specialises in the Middle East) even wrote a book about it: 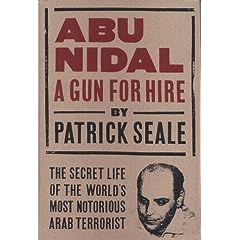 The book was, of course, slashed by neo-con Daniel Pipes, who was nominated by George W. Bush to the board of directors of the U.S. Institute of Peace and was Rudy Giuliani's presidential campaign advisor. This is how Pipes concludes:
"Abu Nidal" is not an investigative report to be tossed aside lightly. It should be thrown with great force."
http://www.danielpipes.org/881/abu-nidal-a-gun-for-hire

Nidal was created by Israel to portray the Arabs as hijackers and terrorists. This laid the groundwork for accepting Arabs as the orchestrators of 9/11.
Top

Smacks self around with a wet fish!

What a clown's universe they have created!
Top


This really says it all. Father of nothing, son of nothing; out of nothing come the villains -- and the fake drama.
Top

Interesting stuff, I do however have one question/comment.

The Laden/Ladin (Arabic is a tough language to translate, the Town I used to live in could be translated Sharjah or Shariqah) family is prominent in the Middle east and has been for some time. I appreciate the voluminous evidence of contrivance surrounding Bin Ladin however I do think that this is most likely a coincidence.

How about this:
Barry Seotoro is obviously a shady bastard with more skeletons in his closet than Jeffrey Dahmer but why change your name to Barrack Hussein Obama to get into politics in 1996? At that time, Osama was a 'known terrorist' and the U.S. had fought a ludicrous war against Saddam. That's some really sharp political thinking, name yourself after two of the most hated men in the world, possibly with the knowledge that they were only to become more hated.

Now onto my hypotheses as to why:
The Islamophobia in the U.S. was obviously going to reach a fevered storm after 7 years of propagandising the Muslim world, U.S. citizens would subconsciously feel the need to repudiate their conscious racism caused by the messages transmitted by the media.
What better way to prove to yourself that you aren't racist than to vote for a black guy with a 'funny' name? Barack Hussein Obama was most likely preplanned as a controlled release valve to allow for the continuing wars in the Middle East whilst releasing citizens of their guilt for such an overtly amoral foreign policy.
Top

Wow, indeed! I had forgotten all about Abu Nidal.

I think these clever games with names (including Osama-Obama which, yes, very likely isn't a coincidence) will stay there as the permanent record of the arrogance of the perpetrators behind them. I mean for the days when humanity will get its freedom of thought back.

Nobody more than this Bin Ladin/Laden belongs to the world of dreams... and like in certain dreams, you are expected to *know*, somehow, it is not real but a dream. This is part of it, of its nightmarish quality.

Arafat, with all his mistakes, was probably not a Mossad agent... neither a terrorist. He was a very visible leader and in the end, since a new era of dreams had begun, he had to be taken out. Incidentally i will mention that for years what wore out the power and authority of PLO, its peace offerings and stances, were the terrorist acts of Hamas. Hamas which has long been rumored of being financed by Mossad...

But when someone hides from the public -- someone who is defined a terrorist and never a leader because it is not clear who is he leading or where -- the safe bet is that that guy is an agent placed there to favor the pigs in charge. It is the Occham's razor, right? :)

I shall mention en passant that the Red Brigades in Italy were said to be lead by a "grande vecchio" (great old man), who was never identified nor named.
Top

nonhocapito 4 Sep 16 2010, 01:27 PM wrote:
But when someone hides from the public -- someone who is defined a terrorist and never a leader because it is not clear who is he leading or where -- the safe bet is that that guy is an agent placed there to favor the pigs in charge. It is the Occham's razor, right? :)

I shall mention en passant that the Red Brigades in Italy were said to be lead by a "grande vecchio" (great old man), who was never identified nor named.

What Bono is to starving African children, Subcomandante Marcos is to revolutionary Mexican peasants.

Take a close look at his horses, wristwatches, weapons, and fingernails and you tell me that this guy lives outdoors in the mountains where the army cannot find him.

The Bin Ladin Abu Nidal palindrome is a great find, and makes perfect sense. Big brother is always on the hunt for Emmanuel Goldstein.
Top

Some other interesting 'coincidences': Al Nida ("the Call" in Persian) is a Division of the Republican Guard
? Aladin translates as 'religion' in Arabic, and Nidal means 'struggle/strife/warfare.'

Regarding Barry Dunham-Soetoro [aka Barack Hussein Obama] it has been noted on bumper stickers that the only difference between Osama & Obama is a little bs. However, I experienced the neurological imprinting that results from verbal repetition a few months ago when I tried to say Osama bin Laden but it came out as Obama sin Laden!

It has also been suggested that Obama could well be the ultimate 'sleeper agent' (as the Soviets were so well known for/accused of during the Cold War), especially given the mysterious background of his allegedly Communist grandparents. And, considering the apparently long-term planning of the nefarious Ruling Elite's agenda, it is quite possible that Barry O was “chosen” for training many years ago.

It does seem very peculiar to have all adults in one’s immediate family circle [including "mentor"] supposedly die within a 26 year period:

No one left to reveal anything relevant or inconvenient about him now, that’s for sure.

"In a time of universal deceit, telling the truth is a revolutionary act." ? George Orwell
Top

Bin Laden was already famous before 1990!


Dear "Truthnow", this is not from my own memory...

it is from WickedPedia:


Early attacks and aid for attacks
It is believed that the first bombing attack involving bin Laden was the December 29, 1992 bombing of the Gold Mihor Hotel in Aden in which two people were killed. It was after this bombing that al-Qaeda was reported to have developed its justification for the killing of innocent people.

With all due respect Simon, Bin Ladin was on the scene prior to 1990, he had been involved with recruitment, training and strategically guiding the Mujahadeen and forming the philosophies of Wahhabist fundamentalism.
He was closely allied with Zbigniev Brezinski and the like. To be fair though, having looked at a few pictures, they are obviously fake although that does not necessarily imply he was manufactured wholly by the media/military.

He's right up there with Santa Claus and the Tooth Fairy!
Top

I left out milk and cookies for Bin Laden and his cave deer on the night of September 10 but the cookies were still there the next morning, and nobody left a dime under my pillow.

We really should hire a bunch of actors to dress up in Bin Laden costumes and pose for pictures with kids at the mall.

Here Timmy, sit on Bin Ladin's lap and tell him what you want this year. Big explosions on TV? An airport a train station and a bus terminal? Well maybe if you're good and promise to watch your news instead of doing your homework you'll get what you asked for.

If thousands of first-graders mailed envelopes addressed to Bin Laden, Tribal Area, Pakistan asking for a September Clues DVD and a Vicsim Report, it would ruffle some feathers.
Top

He's right up there with Santa Claus and the Tooth Fairy!

They should go after the people that manage to produce the video tapes of him.

If someone impersonates him in their local mall, there could be a citizens arrest made to claim the 25m bounty.
Top
Post Reply
39 posts