Anything on the news and elsewhere in the media with evidence of digital manipulation, bogus story-lines and propaganda
Post Reply
First unread post • 755 posts

....the existence of a "pandemic" makes doctors feel important, knowledgeable, necessary and heroic. They feel like soldiers giving up their lives on the front.

Who wants to give up saintly status like that? What physician doesn´t feel flattered when people come out on the balconies of their domestic prisons in the evening and salute the heroes of the day?
Top

Kham wrote:QUESTIONS WE SHOULD BE ASKING (assuming this is a plandemic)
1. What is the world wide quarantine preventing us from witnessing?

1) Of course, the numero uno question - here in the UK its clear the police don't enforce the lock-down so much during the day, at night is a different matter. I have a view of a main road and they are stopping/following cars except trucks + supermarket delivery vans oh and taxis too. Just an observation. I could speculate on the occult elements, especially over Easter, but I just try to say what I see. Whatever it is - like George Carlin said "Were not invited". My gut feeling is, as usual, their are multiple gains to these a-holes... its a developing story, but this feels desperate. Ultimately a show of power, the super cartel is reminding the rest of us and up & coming threats (new power) - "we are in control".

This is in fact the question I ponder the most. I think there's probably a struggle for power going on behind the scenes, some call it an outright war. I'm actually not too pessimistic about the outome. In any case this is confusing at best. But probably any change we're about to face can be considered an improvement over the current status quo. All we can do by now is wait and watch the story unfold ... for better or worse. Whatever happens, my advice would be to be careful not to come to premature conclusions.
Top

Yes Rusty, a few people are in agreement with you...

What is more, I see signs of powerful people wanting to pop this balloon. As I have told you before, there is a split at or near the top, and this latest and worst big hoax does not have unanimous support from the big dogs. Many entire countries, including Mexico and Brazil, have opted out of the scam, and even Trump tried valiantly to opt out in the beginning. Yes, I said it. I am far from being a Trump supporter, and I don't think this hoax is mainly pro-Trump or anti-Trump. It was manufactured to fry much bigger fish than that. But I do see signs that Trump—and therefore some faction of Intelligence/Government—is resisting it. This coronahoax has all the earmarks of a DHS/GatesFoundation/RockefellerFoundation project, but I think those guys pulled this without unanimous consent, which is dangerous. CIA has blown DHS projects in the past, including Sandy Hook and many others, and if they decide to blow this one it could get very nasty.
Top


Evidence the COVID-19 pandemic is false

An impressive compilation of 102 reasons why this is a pathetic global hoax - by Kevin Galalae (April 6, 2020)

Above video 'interview' is still available at this posting (this is on FB). It is London Real's Brian Rose with David Icke. David brings up a lot of what I've found out myself in the last several days in regards to whether a "virus" is even real. He brings the whole context of the situation together in this one talk.

It was originally streamed yesterday (April 6), pulling in the second largest audience in YouTube streaming history. As soon as it was over, it was pulled by YouTube, with no word from YT as yet to Brian as to why. Brian reposted a portion of the talk later, and that was pulled as well.

Apparently, no one in the UK is allowed to broadcast anything that brings the idea of 5G together with the idea of CV. Censorship, anyone?


Evidence the COVID-19 pandemic is false

An impressive compilation of 102 reasons why this is a pathetic global hoax - by Kevin Galalae (April 6, 2020)

The 9/11 movie was 102 minutes too. Good link - one I can try and share with my non-fakeologist relatives.

I just finished a great Corona-talk with Simon today. I'd be happy to chat with anyone else fakeologist/cluesforum aware one-on-one from that past or present, since Corona has given me a few extra hours in my week. Contact me on my site fakeologist.com.

The lockdown doesn't seem to be very strictly enforced to me in Europe currently as far as going outside is concerned. So it might be largely to drive the point home, to create real distress for that part of the economy that is most affected by the lockdown, and to be able to claim when it'll be wound down that all these government actions have worked, that is how everyone got spared from this epidemic.
Top

The question how 'Covid-19 deaths' are being counted seems to be gaining some traction in the social media if I consider the following examples:
https://www.youtube.com/watch?v=YfG9nmAnQp4
https://twitter.com/chrisbergPOVNOW/sta ... 4821509121

Tucker Carlson on Fox News has covered that a WHO official said that authorities may have to look for an remove family members with Covid-19 from their homes and isolate them. Current news headlines says: "Covid-19 outbreak levelling off in US". https://www.bbc.com/news/world-us-canada-52249963

But if things with the Globalists/Bill Gates/Fauci blow up in a big ways I'll start to wonder if this is a sequel of the Donald Trump defeating the Globalists movie. In 2016 we had the Globalists/Clintons/Soros/John Podesta etc., war with Russia on the horizon if Clinton gets elected, in Europe the Brexit, and the migration crisis. (Once again a new round of crisis for the European Union might be upcoming with Italy.) Now there's Bill Gates for a potential villain, there's those photos with Bill Gates' father, Fauci, David Rockefeller, Soros, etc., Gates threatening with vaccine certificates.
Trump's platform was repealing Obamacare. The current situation would possibly allow for having both Trump as president and introduction of big healthcare reforms.
This event could be China's Chernobyl and Trump be a new Ronald Reagan, leading to the fall of the CCP, doing away with some archaic structures and ushering in a reformed China.
Top

After listening to president Trump early on in this situation, he has mentioned several times and in several different ways about the corona virus getting out of control: ‘It’s not the CDC’s fault, their system is antiquated, they did the best they could’.

Trump is not on your side.

Remember, he claims to have seen people jumping out of the World Trade Center building from his apartment. He also claims to have witnessed the 2nd plane crashing into the South Tower.

But we know that is nothing but a damn lie.

Then there's that silly mattress commercial he did. 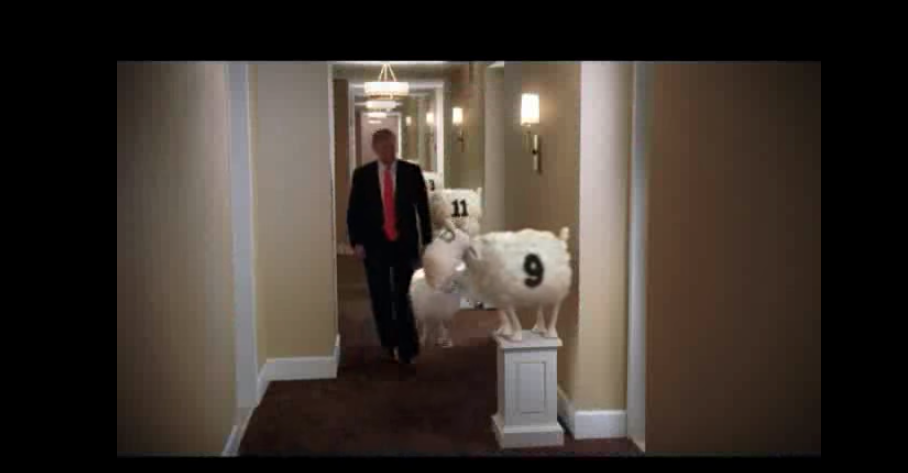 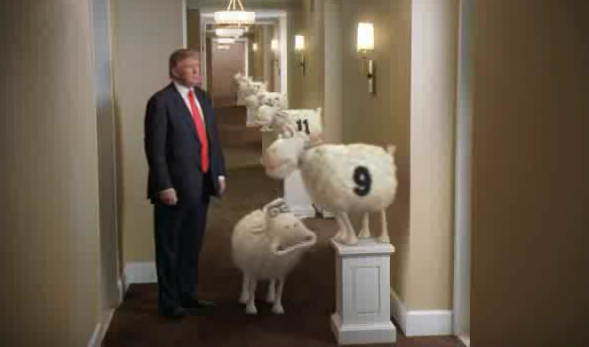 *
Video Title: PsyOps! How to brainwash a nation and create a new normal (“fractionation” technique explained)

Nice 8-minute run-through of what we can expect to see around us. I'm pretty sure many here are at least somewhat familiar with the concept.

We may not have been able to predict the Corona Virus Circus but it was definitely telegraphed on TV.


1974, England - Scientist Philip Carvel has a fateful meeting with a young woman, Milner, bonding over a shared ideology their influence on each other will lead to the creation of a virus - their solution to the world's over-population.

The first episode has one word popping up all the time, "vaccine". A vaccine to the "Russian Flu"

An interesting cartoon by Ben Garrison, although it may not cut all the way through the maze. I agree with anonjedi2 that Trump is no less a player in the game when it comes to top-priority global psyops above the merely political spectrum, such as the moon landings, 9/11, nuclear weapons, the holohoax and now this "deadly" virus. Let´s not forget the 2 trillion dollar "stimulus package" he signed into law. 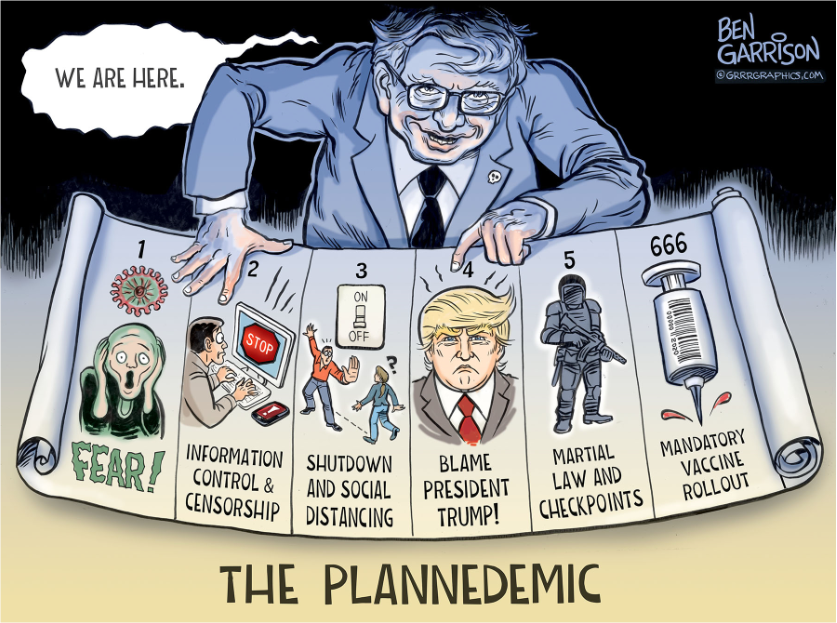 On the contrary even, if the game for later this year is to scare many into supporting Trump. (Conjecture.) If the other path is so insane, what else to do, Trump is obviously the sane option.
Like it was in 2016. In the "Alex Jones world" in 2016 the crazy cabal was hell-bent on going to war with Russia. Now Bill Gates is rising with the mark of the beast vaccine for everyone as apparently suggested by that cartoon.
Top

Which leads to this logical conclusion: